Skip to content
Ask WTA: How is Food Freeze Dried? Backpackers have come up with many innovative ways of reducing that weight, including freeze-drying. But what IS freeze drying? https://www.wta.org/news/signpost/ask-wta-how-is-food-freeze-dried https://www.wta.org/news/signpost/ask-wta-how-is-food-freeze-dried/@@download/image/freeze dried Eva Seelye.jpeg

Backpackers have come up with many innovative ways of reducing that weight, including freeze-drying. But what IS freeze drying?

If you do much backpacking, you know the weight of food adds up quickly. Backpackers have come up with many innovative ways of reducing that weight, including freeze-drying. But what IS freeze drying?

Freeze drying removes the water from substances to preserve them. For commercial freeze-drying, food is first prepared — meat is cooked, vegetables are chopped into bite-size pieces, and grains are cooked. The prepared food is then cooled to well below freezing and placed into a vacuum chamber, where it is warmed and the pressure is reduced. As the pressure lowers, the water in the food sublimates — meaning that it changes directly from solid ice to gaseous water vapor. 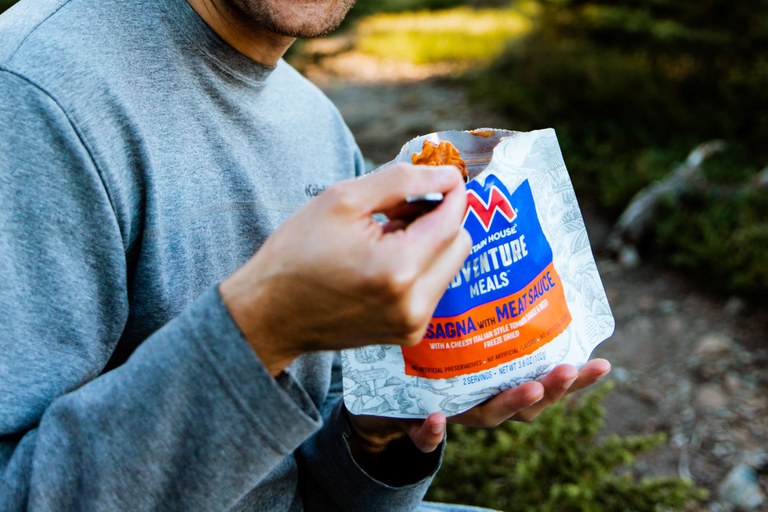 Mountain House is one of my many brands of freeze-dried foods on the market. Photo by Eva Seelye.

The water vapor is allowed to condense and is removed from the chamber, leaving freeze-dried food behind. At the end of this process, the food is stored in air-tight packaging to keep it from re-absorbing moisture from the air, which could cause it to spoil.

Freeze-dried food has tiny holes from where the ice sublimated away. When water is added back to the food, it rehydrates quickly thanks to the little holes. Some freeze-dried foods, such as strawberries, can be eaten without needing rehydration.

The Incas have long used freeze drying at high altitudes to preserve foods, repeatedly leaving food out in the cold overnight and then putting it in the sun during the day. Freeze-drying equipment, which speeds up that process, was invented at the end of the 19th century. It wasn’t used widely, however, until World War II. At the time, there wasn’t a way to keep materials cold while transporting them. So freeze-drying was used to preserve blood and plasma so they could be safely transported without refrigeration.

Astronauts use freeze-dried food for the same reason backpackers do it: to maximize the amount of food they can carry while minimizing the weight. In addition to meals and even ice cream, freeze-drying allows backpackers (and astronauts and soldiers) to have access to the all-important morning beverage: coffee! (To freeze-dry coffee, manufacturers brew it extremely strong and then freeze-dry the resulting liquid. The leftover bits are ground up to become your morning ritual on trail. )

The commercial equipment required to freeze dry food is expensive, which means that some freeze-dried food can be expensive. The advantage, however, is that freeze-dried food is extremely light. And, once it is reconstituted, the food is similar to its original state and many of the nutrients are preserved.

This article originally appeared in the Fall 2022 issue of Washington Trails Magazine. Support trails as a member of WTA to get your one-year subscription to the magazine.