Skip to content
Being a New Mom Was Hard. Hiking Helped. Shanti Hodges is the creator of Hike It Baby, and the author of a new book featuring hikes you can enjoy with your whole family. https://www.wta.org/news/signpost/being-a-new-mom-was-hard-hiking-helped https://www.wta.org/news/signpost/being-a-new-mom-was-hard-hiking-helped/@@download/image/Shanti Hodges and her son..PNG

Being a New Mom Was Hard. Hiking Helped.

Shanti Hodges is the creator of Hike It Baby, and the author of a new book featuring hikes you can enjoy with your whole family.

It's estimated that close to a million women suffer from postpartum depression each year. I was convinced I’d be one of them. At 38, after years of feeling down, I had reached a point where I couldn’t even talk to my life coach without crying. She suggested medication and a therapist. I realized I was depressed with a capital “D.” Eventually, things turned around, and by 40 years old I moved to Portland, found out I was pregnant, got married and decided to settle down, all within a year.

As my due date neared, I felt the old dark cloud edging back in. I was convinced I was doomed to suffer postpartum depression. 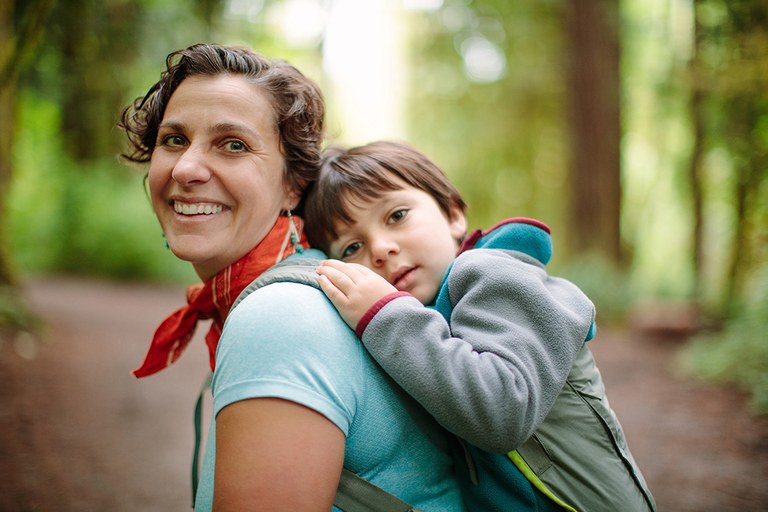 Shanti Hodges, creator of Hike It Baby, and her son.

When my son arrived, I was high with the euphoria of newborn love. I was also weepy, overwhelmed, bleary-eyed and hormone-whacked. One minute I was laughing at my baby pooping 12 times a day, and the next minute I was sobbing about my sore nipples and exhaustion. It didn’t help that my husband would just stand there looking at me like I was a stranger. I just sobbed harder.

Three weeks after Mason was born, I attended a new mama group. I heard myself complaining about my husband and how he just didn’t understand. Everything seemed scary. I was scared of people on the street, cars driving too close on the freeway, lead poisoning in our windows, going for a hike. I could feel the symptoms of depression lingering darkly.

I remember thinking, “What would happen if I got so depressed I couldn’t take care of Mason?” That’s when it dawned on me that the one thing that always made me feel a little better was getting outside. I asked the women if anyone wanted to go on a little hike, just a 0.5-mile trail down the street from my house. I had thought about it before, but I didn’t want to go alone.

The next week, I arrived at the park armed with a ridiculous amount of stuff. I brought a day’s worth of diapers and wipes, diaper cream, excess food and water, a carrier (which I had never used) and my trusty BOB stroller. Three women waited there at the trailhead and two more texted to say they were on the way. We started out, and I bumped along with Mason in the stroller, but eventually we came to a place where it was obvious I needed to ditch the stroller. The “veteran” mamas with 3-month-olds helped me put on the carrier, slide Mason in and keep hiking. I only made it another 15 minutes before I got tired and turned around, but it was exhilarating. I felt my spirits rising, and I knew I wanted to do it the next week.

The following morning, I woke up with the dark cloud hovering. I decided to go for a walk. I started in the neighborhood, pushing the stroller, but as I neared the park, I decided to try stepping onto the trail. I locked up the stroller and asked a stranger passing by if she could help me buckle the back of my carrier. I tried to act nonchalant, but my mind raced. Did I bring enough stuff? What if Mason had a blowout? What if I needed to nurse? Could I protect myself from the unknown with a baby strapped to me?

As I started walking, I felt the pressure still there in my chest, but with every step, the fears and tears started melting away. It was so silent in the forest. The birds got louder, as did the bubbling water in the stream. Everything was green and lush in spite of the July heat. I felt Mason’s warm little infant body snuggled against me. I kissed his head and breathed in his new-baby smell. I moved slowly, but with every step, I felt a little lighter, a little calmer.

That day, I doubled the distance I had done with the group. Along the way, Mason wailed with hunger, so I stopped and asked a random couple to unbuckle the carrier so I could sit down on a fallen tree and nurse. I was nervous and not as graceful as I would have liked, but I did get enough milk in Mason. I felt so proud.

The next week, at my invitation, 10 women showed up. I wasn’t alone in feeling the need to commune with nature and “hike it out.” As the weeks progressed, my circle of friends widened, and new faces showed up. I also noticed something shifting inside me. I felt physically stronger, and the dark clouds moved further away. 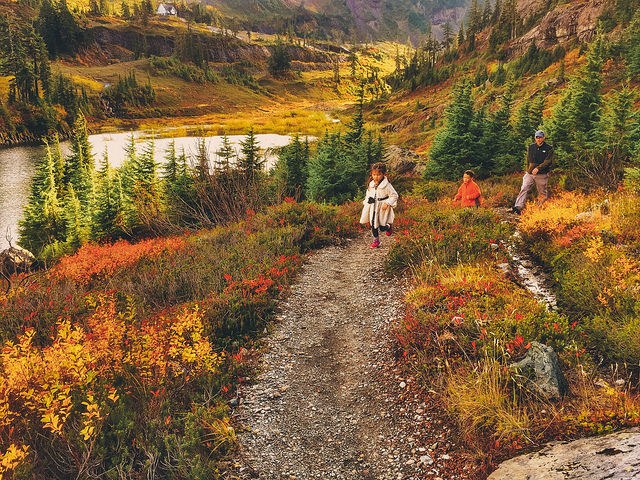 That’s when I decided to create Hike it Baby. I thought, “Wouldn’t it be cool if I could have someone to hike with me whenever I wanted?” By May 2014, Hike it Baby had spread beyond Portland. It was the beginning of a national community of families helping each other get out on trail all across the country.

The simple act of putting one foot in front of the other in an effort to evade depression, make friends, and spend time with my newborn returned me to a place of happiness. It may be a cliché, but the first step is the hardest. Once you take it, you’ll notice how quickly the clouds will lift and the path will open in front of you. Happy hiking.

Excerpted from “Hike it Baby” by Shanti Hodges.

This article originally appeared in the Jul+Aug 2018 issue of Washington Trails Magazine. Support trails as a member of WTA to get your one-year subscription to the magazine.