Skip to content
Celebrating National Parks Week with Art The "Seeing Nature" exhibit at the Seattle Art Museum showcases the beauty of nature--and its power to inspire the imagination. https://www.wta.org/news/signpost/celebrating-national-parks-week-with-art https://www.wta.org/news/signpost/celebrating-national-parks-week-with-art/@@download/image/canyon_colors_crop.jpg

The "Seeing Nature" exhibit at the Seattle Art Museum showcases the beauty of nature--and its power to inspire the imagination.

Paul Allen's much-lauded collection of landscape works has been on display at the Seattle Art Museum under the name Seeing Nature: Landscape Masterworks from the Paul G. Allen Family Collection.

It's a varied collection, from Monet's impressionistic waterlilies to a rarely-seen surrealistic piece from Magritte. It spans several hundred years and a myriad of painting styles, but each piece evokes a sense of place for the viewer.

Landscapes are powerful places, even when we're not physically standing in them. Each person has a different perception of a painting or piece of art, and it can be interesting to hear what someone experiences when they look at a painting. On April 20, in celebration of National Park Week, a few folks had the opportunity to hear what five people whose job is sharing landscapes with the public had to say about the paintings that spoke to them the most.

Park rangers and staff from the National Park Service led two short tours of their favorite paintings in Seeing Nature. They shared perspectives, experiences, and memories from their work.

Turnout for the short tour was so high that they split the group into two. Kelsey Johnson, a five-year National Park Ranger and Alicia Raftery, a Community Outreach Mentor for In My Backyard took half the group and spoke about Monet's The Water-Lily Pond and Cosmic Cities, Grand Canyon of Arizona by Arthur Wesley Dow.

Alicia began by speaking about Cosmic Cities, which shows the Grand Canyon, perhaps at dusk, with rich colors and deep shadows. Alicia said that she appreciated the rich colors of the painting. Although it did not match her memories of the Grand Canyon, that was part of the painting's charm. It preserves the artist's memory of the landscape offering a different perspective on an iconic landscape.

Kelsey spoke about Monet's classic The Water-Lily Pond. Unlike most of the other art in Seeing Nature, Water-Lily takes a close up view. Kelsey said one of her earliest memories is of The Pollywog Pond. The Pollywog Pond was her name for a magical place (actually a ditch) where her mother let her explore at length. In her memory, it's a beautiful place. Kelsey says that, to her, this is what's nature is about. She feels a connection to the close-up view of the painting.

"Seeing nature in close is what it means to be a curious person," she says.

Jim Finnell focused on a painting called Apple Trees by Gerhard Richter. Richter's technique is so exquisite, it looks more like an out of focus photo than a painting, and Finnell explained to the crowd how the road on the edge of the work pulls him in to the work, the foggy atmosphere creating an air of mystery and leaving him wondering just what's over the rise in the road.

Jim Eagan introduced the group to Lake Light, painted by April Gornik. This large-scale painting suggests a cloudburst in a tropical landscape, but Eagan said it reminded him of a similar landscape he sees from the windows of the Empire Builder, a train he provides narration on during its cross-country trip from Seattle to Minneapolis.

Lake Light doesn't feature a body of water, but rather a weak rainshower barely wetting the dried-up lakebed with a mountain range behind it. Eagan says this painting reminds him of his passing through Glacier National Park, which has lost most of its glaciers since its establishment in 1910.

Originally estimated to have 150 glaciers, that number has dwindled to just 25 today. Eagen encouraged the audience to think about the changing climate, and how landscapes we see today will be radically different in just a few years time.

The final speaker was Jimi Hightower of the Student Conservation Association, who directed the crowd's attention to a vibrant image of the Grand Canyon.

"I love this painting because you really do see all these colors in the Grand Canyon. The artist made this painting with more vibrant versions of the color, but when you're there, you'll see every shade of these in person."

She went on to say that in her research, she discovered the artist created the work from 21 separate panels, utilizing 21 different stories to create a full tapestry. She likened this technique to the work that the Park Service and other organizations are doing nationally with campaigns like #findyourpark. The work to make outdoor spaces safe and accessible to everyone is in the hopes that anyone who visits a park can create their personal story or memory, and add it to the tapestry of the whole nation. 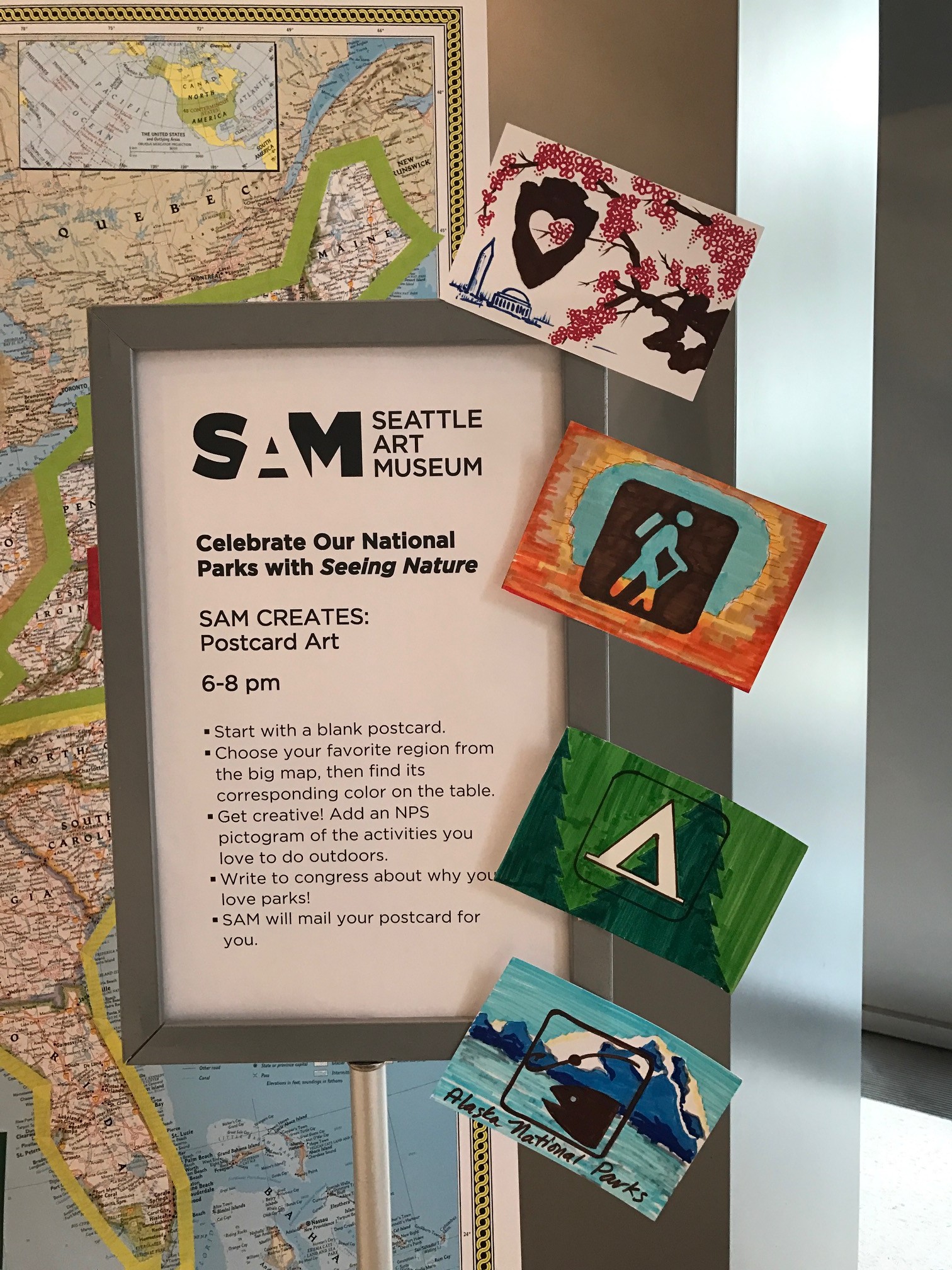 Visitors to the Seattle Art Museum made postcards to send to a lawmakers across the country. Photo by Jessi Loerch.

As part of the Seeing Nature event, visitors were offered a chance to make a bit of art themselves. In the lobby, beneath the John Grade: Middlefork art display, guest were invited to sit down and make postcards to send to lawmakers.

Visitors decorated postcards and wrote notes to encourage lawmakers across the nation to keep public lands open. After the event, the postcards were sent to senators and representatives across the country.

Seeing Nature is on exhibit at the Seattle Art Museum through May 23.