Skip to content
The Adventure Gap: Q&amp;A with Author James Edward Mills Recently, WTA sat down with author James Edward Mills to talk about his upcoming book The Adventure Gap, set to be released by Mountaineers Books in October 2014. In it, Mills chronicles Expedition Denali—the first all-African-American summit attempt on Alaska's Mount Denali—and creates a compelling case for all Americans to embrace their place in the great outdoors. https://www.wta.org/news/signpost/changing-the-face-of-the-outdoors-q-a-with-author-james-edward-mills https://www.wta.org/news/signpost/changing-the-face-of-the-outdoors-q-a-with-author-james-edward-mills/@@download/image/The Adventure Gap.jpg

Recently, WTA sat down with author James Edward Mills to talk about his upcoming book The Adventure Gap, set to be released by Mountaineers Books in October 2014. In it, Mills chronicles Expedition Denali—the first all-African-American summit attempt on Alaska's Mount Denali—and creates a compelling case for all Americans to embrace their place in the great outdoors.

James Edward Mills is an outdoors journalist, the creator/producer of The Joy Trip Project and the author of upcoming book The Adventure Gap, a new book set to be released by Mountaineers Books in October 2014. In it, Mills chronicles Expedition Denali—the first all-African-American summit attempt on Alaska's Mount Denali—and creates a compelling case for all Americans to embrace their place in the great outdoors. WTA recently spoke with Mills about his upcoming book.

What is the adventure gap?

James Edward Mills: We’ve often heard of the education gap, the prosperity gap and the technology gap. But one of the things I realized through the course of my personal experience, as well as my career, is that there is a very comparable divide when it comes to people of color and participation in outdoor recreation. I call that the adventure gap.

"By 2042, it’s predicted that the majority of the U.S. population will be non-white. If nothing happens to change the disparity between those who spend time in nature and those who don’t, we’ll have a constituency of voters in this country that have little or no relationship with the outdoors."

What is your background in the outdoors and how did you first get exposed to getting outside?

Mills: Although I grew up in Los Angeles, Calif., I had the really good fortune of being involved in one of the oldest Boy Scout troupes west of the Mississippi. From the time I was nine years old until I was eighteen, I had opportunities to go camping, climbing and to the beach. I was encouraged to take up things like backpacking and snowshoeing and cross country skiing. Even though I lived in an urban environment, my parents and many of my friends growing up made it a priority to spend time outdoors. I had a lot of really good, positive experiences early on that made it a big part of my life, ultimately allowing me to choose it as a career once I got out of college.

Why is the issue of underexposure to the outdoors one that affects us all?

Mills: By 2042, it’s predicted that the majority of the U.S. population will be non-white. If nothing happens to change the disparity between those who spend time in nature and those who don’t, we’ll have a constituency of voters in this country that have little or no relationship with the outdoors. Long term, that means when it comes time to allocate funding or cast votes for environmental preservation, there will be very few people who will work to protect wilderness.

There’s also the possibility of having a much more urbanized population. And with urbanization comes a variety of different social and physical problems, everything from obesity to high rates of diabetes or  something as simple as vitamin D deficiency because people aren’t spending as much time outdoors. If a majority of our population has no affinity with nature, ultimately I think that it puts our entire population at risk.

Can you talk a bit about the barriers that have kept some communities of color and people in urban areas from being exposed to the outdoors?

Mills: That’s a really hard question to answer. And frankly I’m loathe to offer a definitive answer because it varies from person to person.

Historically there have been prohibitions that prevented people of color from doing a variety of things, dating back to our history of slavery, to the enactment of Jim Crow legislation, through the 1960s after reconstruction, leading up to the Civil Rights era and institutionalized segregation and urbanization. African Americans literally couldn’t move out of cities because suburbs were protected under social mores. The result was forced urbanization.

When you take a look at the culture that’s created around forced urbanization, ultimately there’s not a tradition of spending time outdoors. Eventually, people don’t have any good reasons to spend time in nature simply because it’s not part of their cultural identity. At the end of the day, though, it really is a personal choice. I think as individuals today we decide whether or not we’re going to spend time in nature.

What was the experience of writing the book like for you? How long did it take?

Mills: Some of the passages in the book are excerpts of other stories that I’ve written over the years. As a person of color in the outdoor industry, it kind of fell to me as the de facto person who told these stories because, frankly, there are no other African American journalists in the outdoor industry, at least none that I’m personally familiar with or aware of.

Over the last several years I’ve cultivated a wide variety of different narratives, some of which wound up in this book. Over the course of those conversations with people, the book had already kind of gotten started. But what pulled everything together was the catalyst of the Expedition Denali project, which gave me a contemporary narrative to tell. The ultimate writing of the book was a combination of almost 18 months of writing and research and editing.

When Expedition Denali was happening you were in Alaska, right?

Mills: Yes, I was. Originally, I was supposed to be on the summit team. But unfortunately, while we were training in Alaska the previous year, I was having some difficulty with my legs. I came home and was actually diagnosed with osteoarthritis in both of my hips, and I had to have them replaced.

Fortunately, surgery allowed me to become physically fit enough to make it to Alaska to spend the summer there while Expedition Denali was on the mountain. I was actually able to fly in with the team and see them off at base camp. And then I spent two weeks in Denali National Park and then the following week waiting for them to arrive at the NOLS base in Palmer, Alaska. During that time, I was receiving satellite phone transmissions via email. Through that I was able to chart the team’s progress on a day-by-day basis, in terms of what they were experiencing and what was happening at the time. 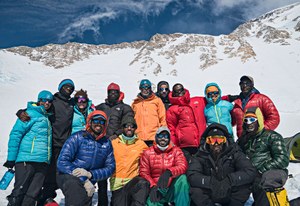 Want to be part of Expedition Denali as it unfolds? Check out the accompanying documentary, An American Ascent. Photo by Hudson Henry.

When it comes to closing the adventure gap, how can everyday people be part of the solution?

Mills: I think it’s important that people are aware of the difficulties and limitations that other people have. We all need to do whatever we can to support one another, and stop telling others (and ourselves) that there are things we can’t do—especially when it comes to very impressionable people at young ages. It speaks to the concept of vocational training. We need guides. We need environmental scientists. We need foresters. We need people whose job it is to spend time in nature. And I think we should stop telling each other that that career path is a dead end.

If people could walk away from your book with one thing, what would you want it to be?

Mills: More than anything else, I want people to understand that this isn’t exclusively an issue of race. This is a conversation about everyone’s adventure gap and getting more people outside. We all deal with some type of barrier. For some, it’s institutionalized racism. For others, it’s a disability. Oftentimes, it’s just us telling ourselves that we can’t do something. I want people to break down those barriers.

To experience the drama and adventure of Expedition Denali on film—with video diaries, breathtaking views of Denali and one-on-one interviews—check out An American Ascent. The documentary is co-produced by James Edward Mills (author of The Adventure Gap) and is expected to debut on the adventure film circuit in November. Public screenings and distribution of the film will follow. Watch the trailer on vimeo—or below.

This is a great story. I'd never really thought about the "adventure gap" before, but it makes complete sense, and it is cause for concern.

Love the interview and can't wait to see the documentary. Getting kids of all colors out into the wilderness at a young age will help them bond with the outdoors and experience themselves in a new way. Kudos to this team for bringing their experience to the pubic.

I really appreciate the support of the Washington Trails Association for such a thoughtful interview!