Skip to content
El Centro de la Raza on the Trail: An Outdoor Field Trip for Teens This trip, which was supported by WTA's Outdoor Leadership Training program, was a chance for teens to connect with each other and the outdoors. https://www.wta.org/news/signpost/el-centro-de-la-raza-on-the-trail https://www.wta.org/news/signpost/el-centro-de-la-raza-on-the-trail/@@download/image/El Centro de la Raza Lily Poppen3.jpg

Posted by Jessi Loerch at Sep 02, 2021 09:51 AM | Permalink
Filed under: Outdoor Leadership Training, Community, Partnerships, Trails for Everyone

This trip, which was supported by WTA's Outdoor Leadership Training program, was a chance for teens to connect with each other and the outdoors.

For Liz Huizar, youth programs manager at El Centro de la Raza and Krista Dooley, WTA's director of community partnerships and leadership development, preparations for a youth field trip were business as usual. The late July trip led by El Centro de la Raza and supported by WTA’s Outdoor Leadership Training program involved all the standard logistics: timeline, transportation, number of students, meal planning, forecast etc. However, this program was anything but the usual. Although El Centro had successfully led two in-person field trips during this unusual pandemic summer, this trip would bring teens from two different El Centro locations, Seattle and Federal Way together on the trail.

“For many of these students, it will be their first time out hiking. (Our goal) is to help them understand what it might look like (and) give them a connection to the space,” said Liz, considering how differing background experiences might present unique challenges. “For many Latinx teens, hiking just isn’t cute.” 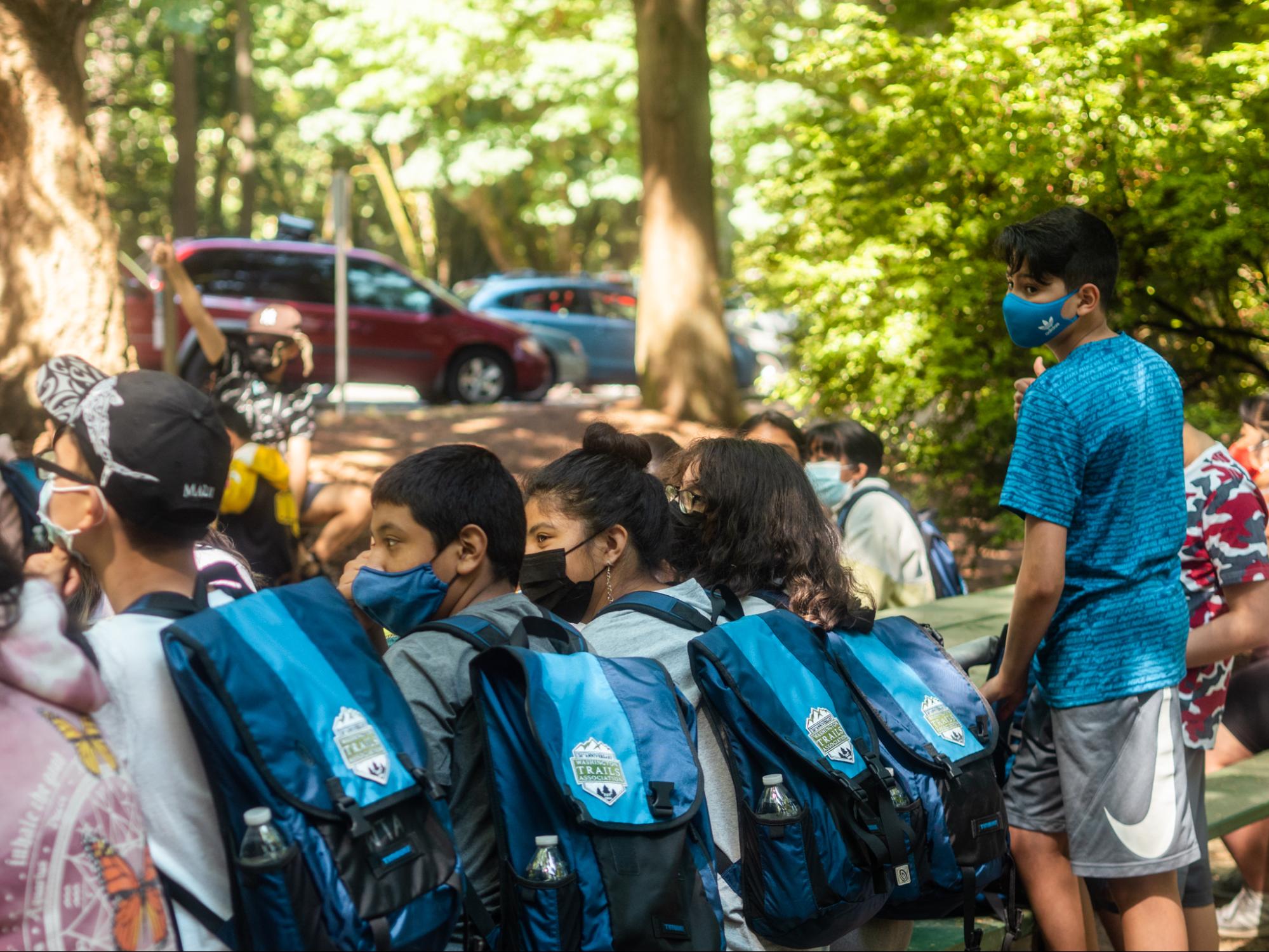 In April, Liz and another leader from El Centro de la Raza signed up for an Outdoor Leadership Training (OLT) Hiking Workshop at Point Defiance Park. Like other workshops, the participants represented a variety of organizations, locations, and brought varying levels of past programming experience for youth. The common thread? To give students exposure to outdoor spaces and empower them to feel comfortable interacting with the space.

Since 2014, OLT has supported youth and community outings by training leaders and educators like Liz rather than taking youth out directly. After multiple months of research, WTA's community partnerships and leadership development director Krista Dooley had a framework: The multiplier effect. “By engaging with leaders, we are ... able to leverage the multiplier effect and help create thousands more youth experiences in the outdoors than we ever could have alone."

El Centro de la Raza has a long established history within their communities, and leaders like Liz have vast expertise in building personal relationships and recognizing the unique challenges of their youth. The OLT workshop in April built on existing leadership skills, gave the tools to  translate them in an outdoor setting while the gear library addressed the challenge of outfitting a large group with the proper gear.

A surprising number of students signed up for the July hiking field trip, even surpassing the charter bus’s capacity. When the bus arrived at Point Defiance, 36 Latinx teens tumbled out of the bus, lining up to grab backpacks, trekking poles, water bottles, and snacks. The day started off with an ice breaker game and the question: “What is your favorite thing to do outside?”

Students scattered into groups of four and gave a multitude of responses ranging from riding bikes to taking pictures. Liz walked around, encouraging students to think outside the box,  garnering responses like “playing soccer” or “playing with my pets.”

Hiking from the parking lot to the trailhead, a small group of students energetically led the way while staff — Liz, Mimi Santos, Maria Casarez, Cecilia Espinoza — and another group of students brought up the rear. 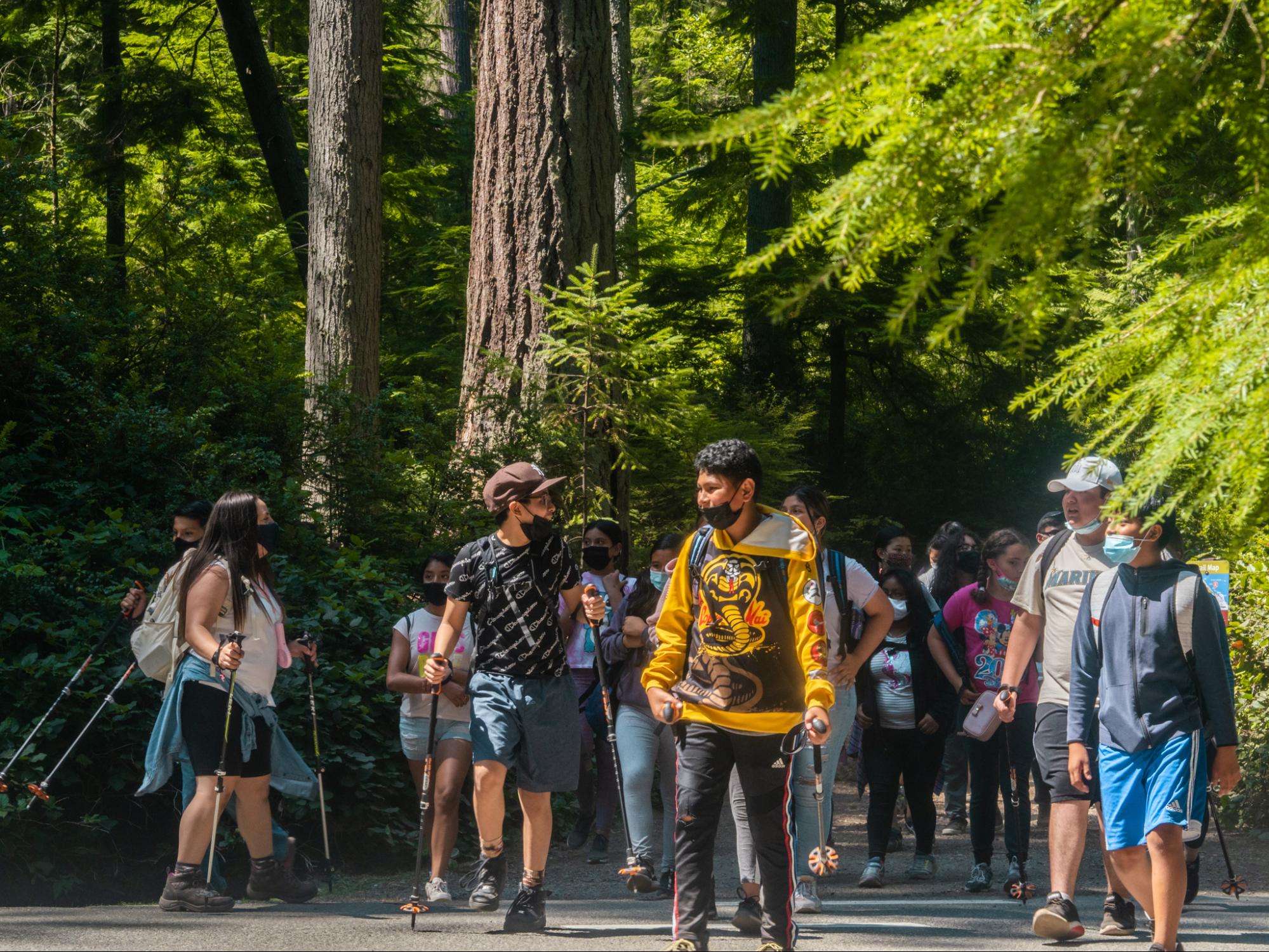 THE CENTER FOR PEOPLE OF ALL RACES: MADE FOR MEETING

Throughout the day, moments and memories were documented via social media; from boarding the bus and handing out burritos for lunch to reaching checkpoints like mile markers or the picnic site by the water. These snippets were shared with families and the El Centro de la Raza community, giving them a real-time and behind the scenes look at the trip.

El Centro de la Raza, “The Center for People of All Races” has a deeply rooted history in the Seattle area, officially founded in 1972 and now for more than forty years, “has provided a gathering place for Seattle’s otherwise dispersed…and in 1972, largely invisible Latino community and welcomes all individuals with open arms.” It’s multi-faceted approach to community needs and social justice prominently centers youth and school programming.

Many of the students on the field trip not only came from different El Centro locations, Federal Way or Seattle, but also had varying levels of past engagement with youth programming at El Centro. Melvin and Freddy,  both 12-year old students at the Seattle location, had been on the two previous field trips, one to the El Centro historic building and another to the upcoming NHL home of the Seattle Krakens. Over lunch, they talked about soccer and online school, video games and in-person school. There was excitement, but also anxiety about returning. “I might have forgotten how to play soccer,'' Freddy shared before joining a group of students looking at the water. 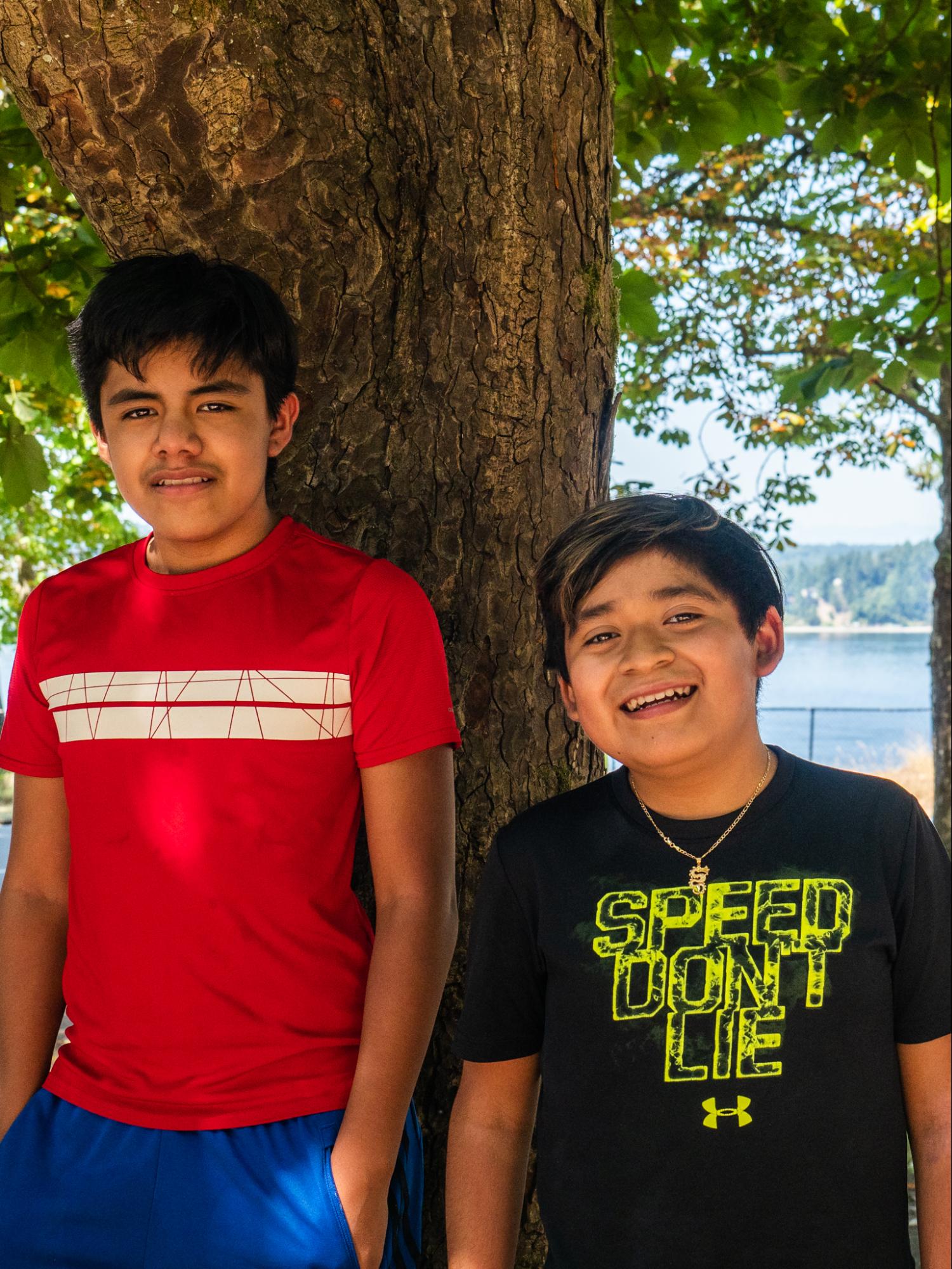 Another pair of students, Yaira and Genesis, both from Federal Way, articulated similar sentiments: “Online school was really hard,” “I’m shyer on Zoom and don’t even turn my camera on…I don’t like to speak up I just chat in private,” “It’s really hard to focus for that long.” Although they had participated in some online programming from El Centro, neither of them had hiked before. Hiking might not top the list of their favorite field trips, but it was crystal clear that being together with friends outside and in-person was the pinnacle.

A TRAIL FOR TEENS OF ALL SPACES: MADE FOR SHARING

“I wish my sister could see this,” one student said, snapping pictures of the water from Gig Harbor Viewpoint and the moss-covered maples.

Two students and sisters, Xiomara and Estella, were especially photo-savvy. This trip was their introduction to El Centro, but not to Point Defiance. They had visited the southern part of the park with their parents and were thrilled to have hiked to see the wide-open ocean view.

“I really like the forest,” Xiomara said. “We drove to the desert once and it was so dry. I like how pretty the green is.”

Estella also took photos of the trip, using social media to share her experiences. “I take pictures for my little sisters,” she said, scrolling through Instagram photos of them posing in grassy fields or by the water.

Angel, another student, showed off his sketchbook he brought for the hike. It was full of vibrant drawings of his favourite anime characters and dynamic sketches of the mountains. Everything he draws, he said, is drawn from memory. 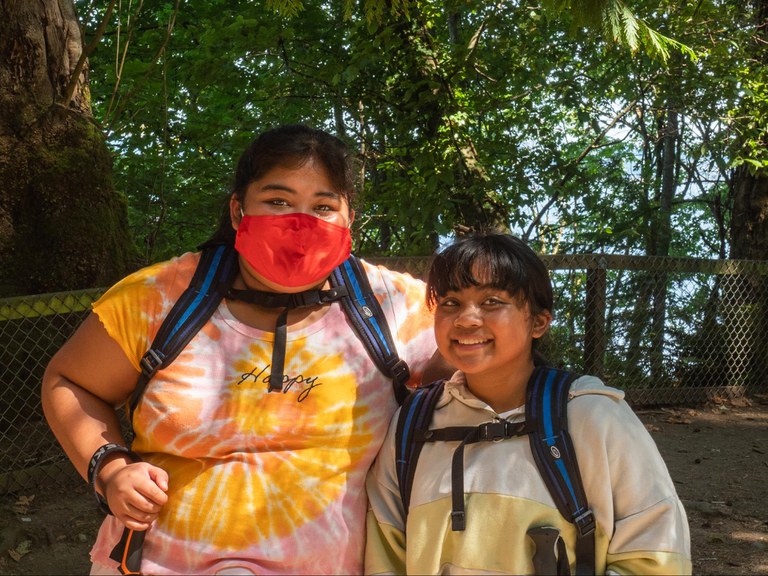 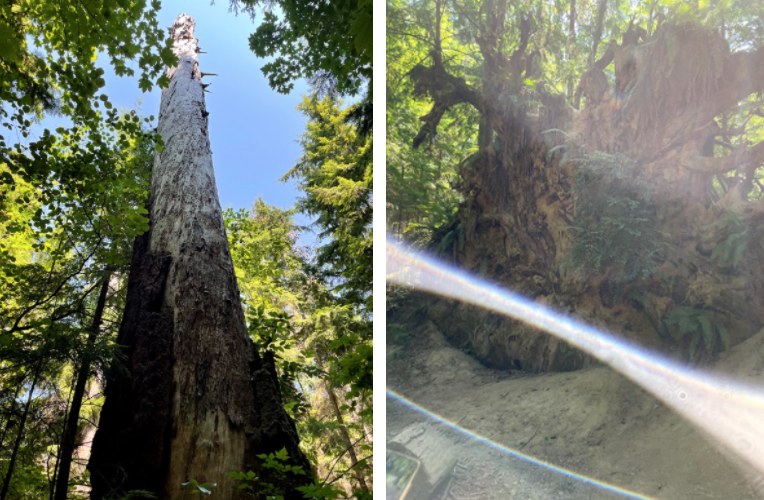 Photos by Estella and Xiomara.

Many of the students clearly shared an interest in both photography and nature. “Look at this view,” Genesis said excitedly, showing off a hilltop view of the city skyline. “It’s my secret spot.” When asked to divulge the ‘secret spot’s’ location, she answered: I don’t really know [where it is]. I just found it one time when I was trying to take a shortcut on the way home.” Walking next to her, Angel described his own go-to secret spot; a tall tree in the middle of their apartment complex that kids climbed. As he passed by a looming Douglas fir tree, someone playfully asked, “How would you climb that?” Angel thought for a moment and then lifted his trekking poles in the air with a grin, “With these!”

Creating and sharing images is essential to framing spaces. It can be a tool to visualise how each individual interacts with a space, interpret it, include others, and most of all, empower them to challenge certain narratives or definitions of ‘nature’ that have not taken their own lived experiences into account.  Each of the student photographers and creators did more than capture the natural beauty they saw; they also expanded the view of who gets to share in it. 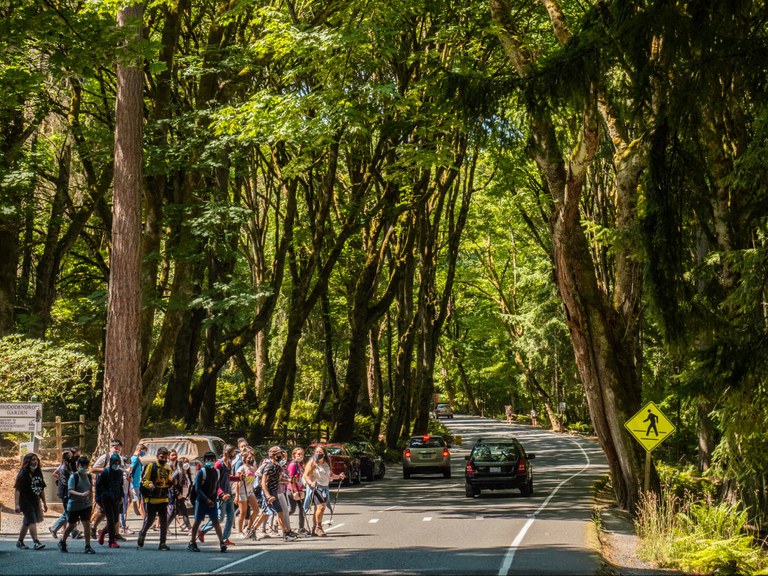 Packing up after lunch, everyone’s feet, and eyes, were focused on the trail signs pointing back to the parking lot, but Liz was already looking to the future.

“We really want to lead a snowshoeing field trip … (probably) in the Snoqualmie area,” she said, “…even though I’ve never been snowshoeing before!” While snow is in short supply at the end of July, ice cold water and an air-conditioned bus waited for the students at the trailhead. As the teens loaded up and traded their backpacks in for snacks, Liz took one last video to share with the El Centro community. “A round of applause for the 3-mile hike you did today. Three miles!”

Lily Poppen (she/her) likes long walks down produce aisles and wandering to find a sense of place—being born in China, raised in Iowa, attending college in Maine and slowly but surely pushing westward working in Colorado and Washington. While she loves New England, she has been delighted and inspired by the people and places (and switchbacks) in the Pacific Northwest. She is thrilled to be contributing to WTA this summer and on the side, serves as a poetry reader for "The Offing" magazine, based out of Seattle.

Thank you Krista and Liz! More stories like this please!