Skip to content
Energy, Purpose, Excitement: Coming Full Circle At Hidden Lake In 2018, a group of friends attended a work party at Hidden Lake to help with a major construction project. A year later, two of that group returned to finish the task as a thank you to the woman who introduced them the trail work. https://www.wta.org/news/signpost/energy-purpose-excitement-coming-full-circle-at-hidden-lake https://www.wta.org/news/signpost/energy-purpose-excitement-coming-full-circle-at-hidden-lake/@@download/image/crib-wall-with-jeremy_jt-hart.jpg

In 2018, a group of friends attended a work party at Hidden Lake to help with a major construction project. A year later, two of that group returned to finish the task as a thank you to the woman who introduced them the trail work.

Last year at a work party on the Hidden Lake trail, a volunteer named Christina earned her hard hat. She had brought her husband Greg, son Marcel, and good friend Michael along for the weekend work party, and they spent two days prepping the materials for a crib wall: a large structure that supports the trail tread on steep slopes. 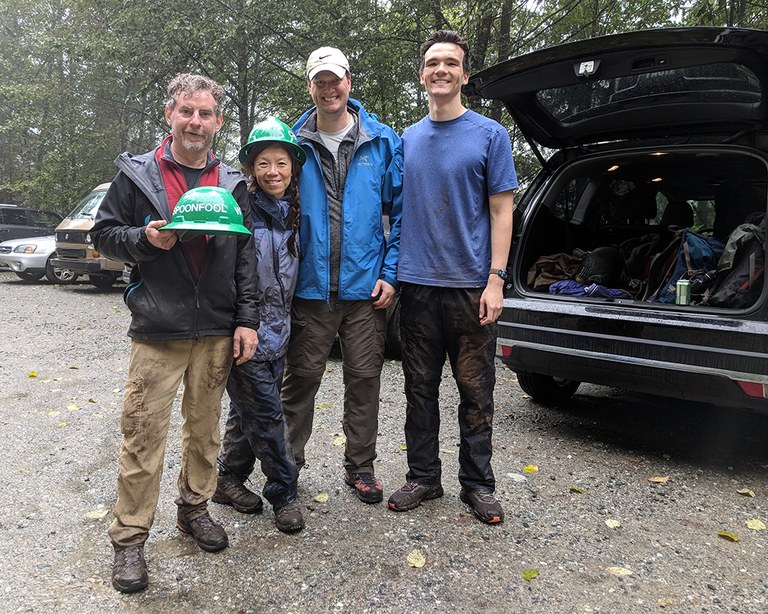 left to right: Michael, Christina, Greg and Marcel at the Hidden Lake work party in 2018.

Christina and Michael spent the majority of that weekend peeling a downed cedar log, which would be a fundamental piece of the crib wall. She was enthusiastic and proud to have earned her green hat, which volunteers get after having done 5 days on trail with WTA. Sadly though, this fall Michael contacted WTA to let us know Christina had died suddenly from an underlying medical condition.

When he notified us, Michael stated that WTA had given Christina such energy, purpose and excitement that he wanted to honor her memory by doing more work. So in September of 2019, Michael and Greg returned to the Hidden Lake trail. On that work party, the crew completed the crib wall, using the log Christina and Michael peeled last year. 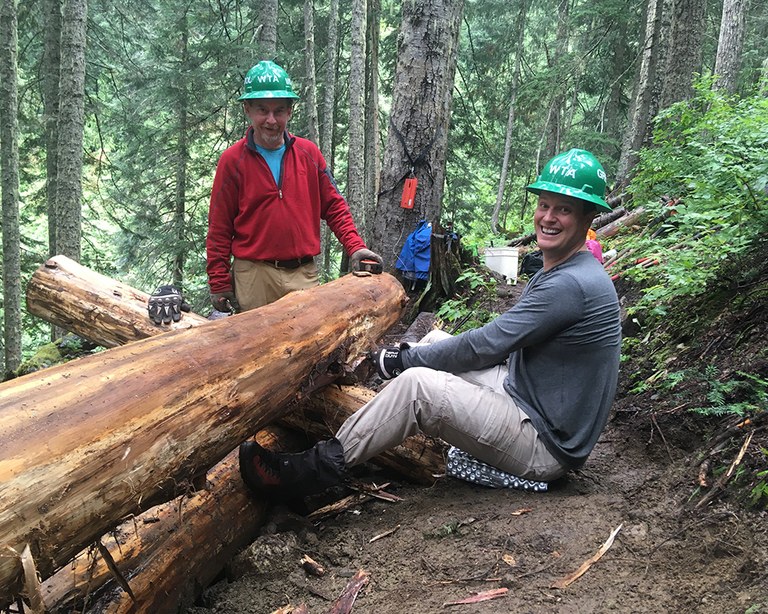 Michael and Greg working together to place the log Michael and Christine peeled at the 2018 work party. Photo by JT Hart.

We wanted to learn a little bit more about the remarkable, energetic woman who had been part of WTA's community. So we asked Michael and Greg to tell us a little more about how they had all come to WTA. 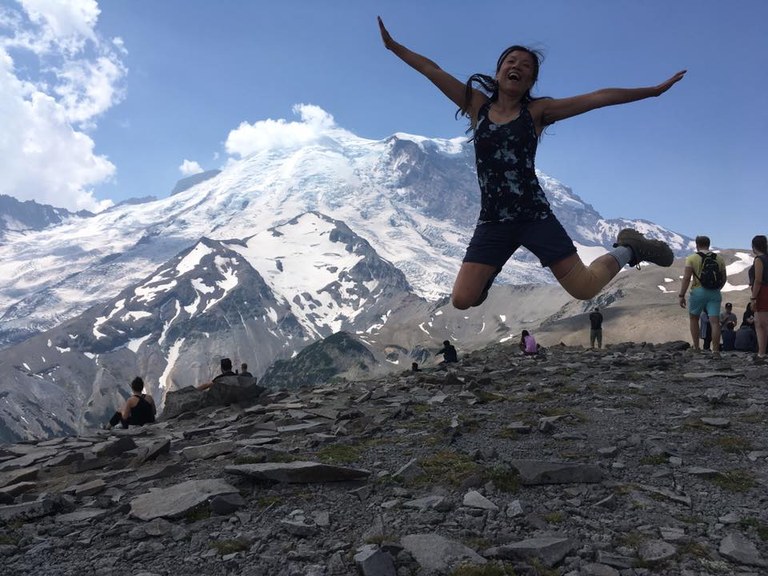 Christine in her element: on trail. Photo courtesy Greg Wright.

"I was happy to go with whatever Christina picked. She voraciously read trip reports on WTA. she was very experienced, and picked interesting, challenging hikes."

While Christina was passionate about hiking, she also loved volunteer work. She'd been a Big Sister in her early thirties and she volunteered at the World School in Seattle for the last several years of her life. So WTA's volunteer program was the perfect answer to her love for being outside and giving back. 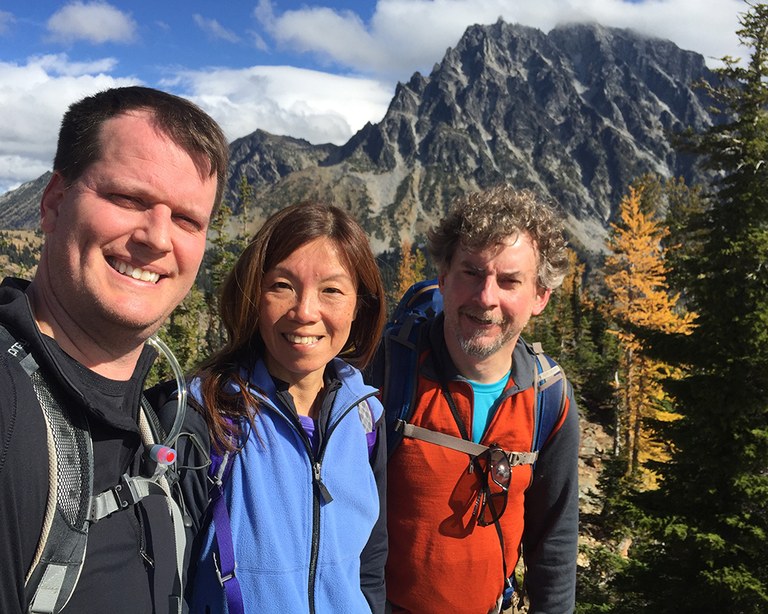 Greg, Christine, and Michael on one of the many hikes they took together. Photo courtesy Greg Wright.

"Christina was passionate about hiking, she never wanted to stop," recalls Greg. "But often, when we were hiking, we'd wonder how certain parts of the trail were maintained."

Glamping and Getting Green hats

That curiosity led Christina to WTA's volunteer work parties. Once she knew about them, she asked Greg and Michael if they wanted to try one.

Then they realized most of the trails they were interested in volunteering on were too far away to be day trips, so they would need to camp near the trailhead. Because of a rough camping trip when her kids were young, Christina was hesitant to spend the night outside. It was Michael and Christina's food connection that convinced her.

"I agreed to take on all the food and cooking for the three of us, and she agreed to give camping another try," Michael explained.

So they signed up for a work party near Winthrop, and the weekend was a huge success. 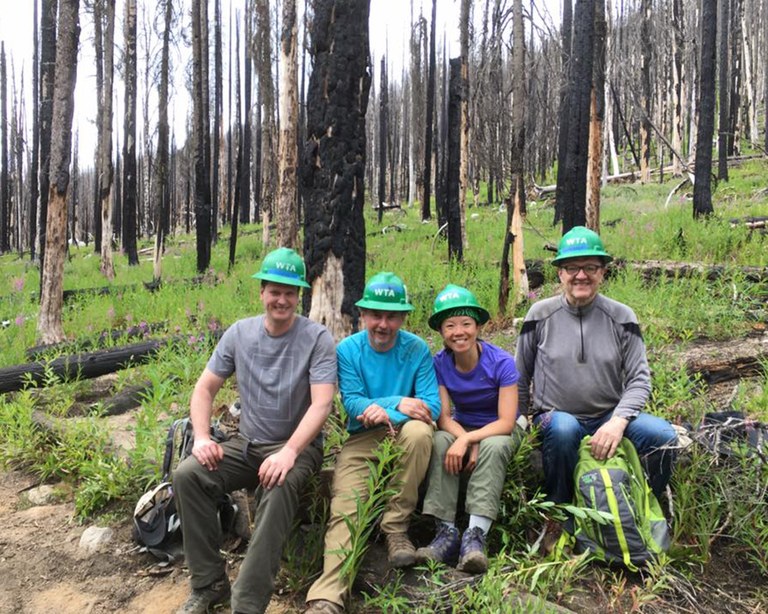 Christine's first camping experience in years was a huge success, thanks to trail work and good food from Michael. Photo courtesy Greg Wright.

"We had a great outing. The work party was super fun, and the camping blew Christina's mind. I made sure we had super awesome food and wine and it all clicked for Christina! After that, she wanted to do as many camping/work parties as we could schedule," says Michael.

The three did several of these trips together, most recently the one at Hidden Lake last year. Greg remembers her vast reserves of energy at these work parties.

"She was the most determined person I have ever met and even though she was only 5’3” and 112 pounds she was strong and unstoppable, I was always trying to keep up with her." 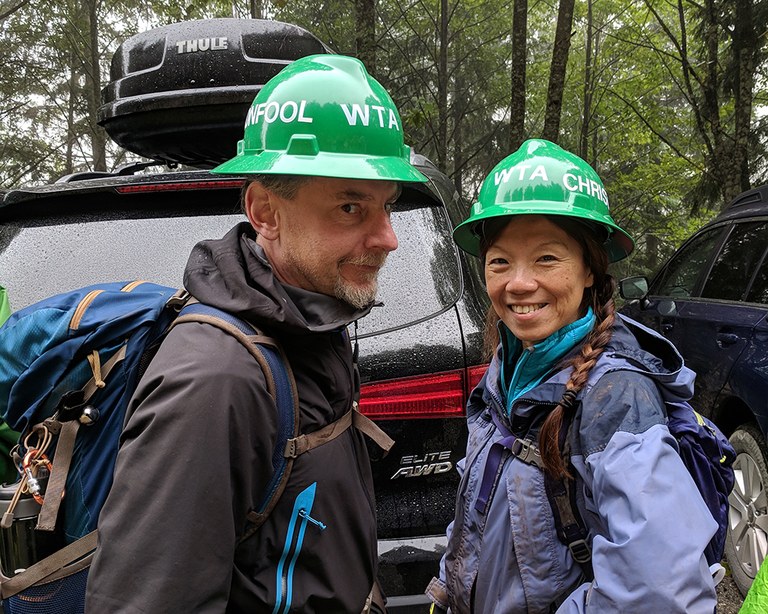 Michael and Christina, with the hard hats they earned on the Hidden Lake work party. Photo by JT Hart.

Christina was the reason the three had gotten into volunteering. So volunteering made sense as one way to remember her. Greg and Michael knew that returning to finish the crib wall they'd worked on last year would be a wonderful way to honor Christina.

Michael said, "We wanted to make sure we were there to get started on putting that tree in its final resting place."

Over the course of three rainy days, Greg, Michael, and the rest of the crew completed the huge crib wall. Despite the mud, by Sunday the crew was putting the finishing touches on the crib wall, a feat Greg is sure Christina would have been thrilled by. 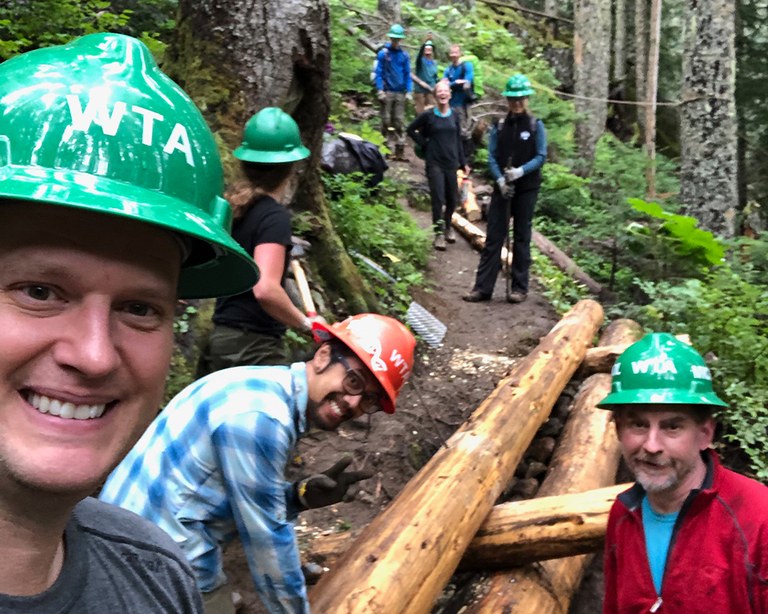 Everyone on the crew all weekend worked hard to get the crib wall completed. Photo by JT Hart.

"Being able to complete the crib wall ... was very special and gratifying. It was also emotional for me. Christina put 100 percent effort into everything she ever did, and I’m sure it put a smile on her face, wherever she is, to know that we finished the project and that it will be there helping people enjoy the trail for years to come!"

Michael considers the work the crew did together just as much a memorial as the crib wall itself.

"Seeing other people commit to making sure we got that project done helped re-enforce the spirit and enthusiasm that Christina brought to WTA and that I cherished sharing with her. I was so happy we got that project finished. I see it as an amazing memorial to Christina."

I worked with her on a couple of work parties. I'm very sad to hear this. My condolences to her husband Greg and son.