Skip to content
Epic Made Easy: New Books Help Sections Hikers Tackle the PCT Tami Asars and Eli Boschetto have released new guidebooks: one covering the PCT in Washington and one for the PCT in Oregon. The books help hikers tackle the trail in manageable chunks. https://www.wta.org/news/signpost/epic-made-easy-new-books-help-sections-hikers-tackle-the-pct https://www.wta.org/news/signpost/epic-made-easy-new-books-help-sections-hikers-tackle-the-pct/@@download/image/bookcovers_web.jpg

Tami Asars and Eli Boschetto have released new guidebooks: one covering the PCT in Washington and one for the PCT in Oregon. The books help hikers tackle the trail in manageable chunks.

An abbreviated version of this article originally appeared in the Jan+Feb 2017 issue of Washington Trails magazine. | by Cassandra Overby.

The Washington Trails community has been busy! Regular contributor Tami Asars and former Washington Trails magazine editor Eli Boschetto have released two new guidebooks to help section hikers tackle the Washington and Oregon sections of the PCT. (Look for the California book in fall 2017.) We recently sat down with them to find out why you should add section hiking the PCT to your bucket list—and how these books can help you check it off. 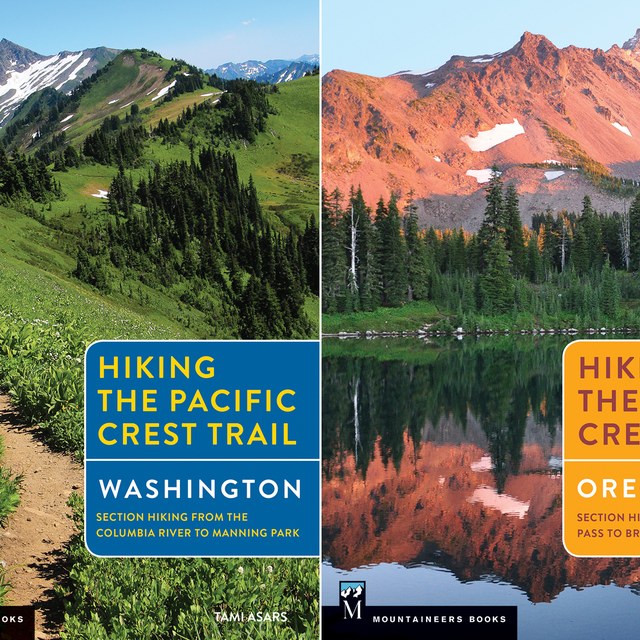 Thousands of people have hiked the PCT since it was officially established in 1993. What makes this such a perpetually popular trail? And why should people still hike the PCT today?

Tami: The PCT is, and will always be, one of the most epic, challenging long-distance trails in the United States. Not only does the distance test the true physical and mental capabilities of the hikers who attempt it, but the terrain is so varied that even adroit hikers are taken to task with everything from a hot desert with little water to wet, sometimes snowy exposure on high ridges. In Washington specifically, one of the most demanding parts of the trail is weather—the sky can throw everything in its playbook at you. For as much as it hands out, the PCT gives back in the form of boundless soul food. From high subalpine meadows to deep river valleys, it’s one of the most scenic trails in the world and offers the adventure of a lifetime.

Eli: I think people hike the PCT for many reasons: 1. The challenge—it’s 2,650 miles across some of the most rugged terrain in the world, including scorching deserts, skyscraping alpine passes and sprawling volcanic plateaus. 2. The beauty—it’s 2,650 miles across some of the most scenically stunning wilderness in the world, from the sculpted granite peaks and valleys of the Sierra Nevada to the glacier-capped volcanoes and knife-edge ridges of the Pacific Northwest. 3. The refreshment. It’s 2,650 miles for people to truly escape from the busyness of “normal life,”—whether thru-hiking or section hiking—to discover who they are and find contentment, healing and relaxation in an environment that only requires walking, eating and sleeping.

What sets this guidebook series apart from other PCT guidebooks on the market?

Tami: Most of the guides on the market today are targeted to thru-hikers or day hikers. I wanted to write a guidebook that was designed with section hikers in mind, since our needs and our wishes are slightly different. Taking five months off to hike the whole thing is often not realistic for busy folks, those with physical limitations or those who simply prefer a good meal and a comfy bed after a week on the trail.

My guide is broken down into seven sections containing logical, point-to-point trailheads where you can take passenger cars. Detailed directions to the trailheads help hikers come and go seamlessly. Each section, ranging from 28.8 miles to 126.6 miles, is further broken down into legs, or manageable chunks, to help readers digest the trail descriptions and get them prepared and excited for what to expect in each new stretch. Every water source, every camp site, every landmark and landscape feature is documented.

I even documented the “one-off” camps where you could put a tent but it wasn’t optimal. The reason for this is that section hikers are using the trail at the same time as thru-hikers and with all of this traffic, occasionally camping can be competitive. It’s not uncommon to come to tent sites and find every single flat spot taken (flat spots in the Cascades are often few and far between). In this case, with sore feet and aching shoulders (and sometimes looming darkness) we are forced to try to find the next flat spot possible to set up our tent. I wanted hikers to have every camping option possible, even if the site wasn’t their first choice. Additionally, the book contains suggested itineraries with noted mileage to help hikers plan their adventure, full-color maps and elevation profiles to assist hikers in finding those camps and water sources and over 200 full-color photos to build drool-worthy excitement. This is a good coffee table book for dreamers as well!

Eli: This is the first series of guidebooks that focuses specifically on PCT section hiking. This makes the PCT accessible to the “average" hiker who may only have a week or two at a time to hike a long trail. In this way, the books focus on manageable chunks of the trail, with info on how to prepare for and execute section hikes. After a few summers, section hikers can claim an entire state’s length of the PCT without having to leave jobs and family. 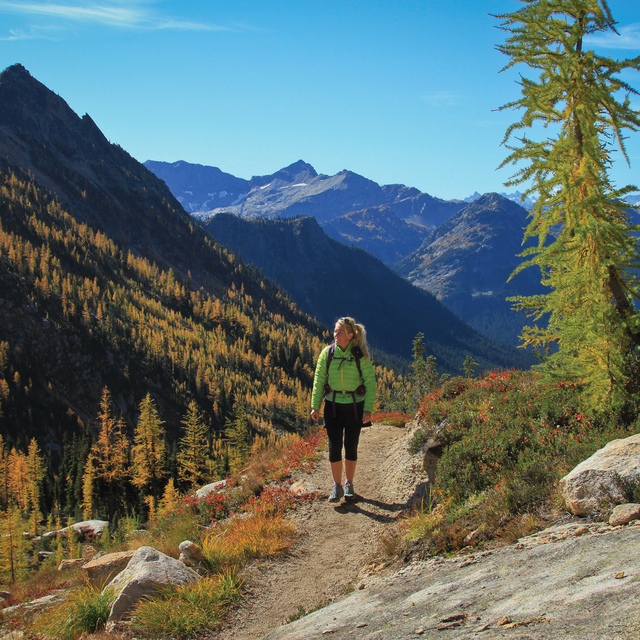 Tami Asars hikes along the PCT near Cutthroat Pass. Photo by Tami Asars.

Tami: Over the last couple of years I’ve had two. When I was writing the guide it was “Smile” because I was constantly asking to photograph people with my battle cry before the shutter . . . “SMILE!” Then, when I thru-hiked the PCT this past summer, I ended up with the trail name “Doo-Dah” because I was told I was "one zippy away from a doo-dah" in reference to my excitement over bluebirds and the Disney soundtrack that occasionally played on my headphones while I shimmied down the trail.

Tell me about the experience of hiking the PCT and writing this book. What was it like? How long did it take you?

Tami: Documenting this trail was a giant task and one that required two years of planning, hiking, documenting, photographing and writing. I spent nearly two complete summers out in the field with my GPS, walking on the PCT and recording campsites, lakes, tarns, meadows, puddles, dribbles, creeks, rivers, groves of conifers, thickets of deciduous trees, valleys, ridgelines, peaks, talus fields, side trails, forest roads and, well, you name it! The PCT became like an old friend and I got to know every one of its tiny details, its twists and turns, its ins and outs, its dirty secrets, its challenging weather and its twinkling backcountry magic.

At times, it was exhausting work and I wanted to beat my head squarely on a Douglas fir. At other times, it was magical as I watched sunsets over volcanoes and met people from all over the world. All in all, it was a remarkable experience.

Eli: I spent three summers hiking the PCT in Oregon. I hiked several sections each summer, in addition to shorter hikes when I wanted to revisit areas at different times to survey conditions or get more photos. Winters were spent doing all the writing and processing photos. After finishing the hiking, I spent an additional six months fine-tuning the manuscript and taking a few more photo trips. Then there was about six months of editing with the publisher. In all, it was about a four-year project. It was a lot of fun—except when dealing with wildfires, which there were a lot of during the summer of 2014. I got to know the entire state of Oregon very intimately, from its diversity of flora and fauna to its geologic history.

What was the most adventurous or exciting thing that happened to you in the process of hiking the PCT and writing the book?

Tami: In page 217 in my book, I recount an experience I had with a loud thumping in the forest. It was getting dark and the thumping was brash and deliberate. No sticks were breaking and there were no other noises. I saw nothing in the direction of the thumping, even after I stepped off trail to try to investigate. My spine was tingling and I was chillingly perplexed.

I’m not necessarily one who believes in the paranormal or supernatural, but when pinecones began hitting me, I was out of there! What it was, I’ll likely never know. Sasquatch? Supposedly they’ve been spotted nearby. Spirits? The nearby tribal members believe the spirits of their ancestors still loom large in this area. Douglas squirrels dropping cones? That is the most likely scenario, but it doesn’t explain the thumping, which was much louder than a cone dropping. The mystery lives on!

Eli: Probably the most exciting—i.e., stressful—part of the process was getting mostly surrounded by wildfires in the Sky Lakes Wilderness, south of Crater Lake. There were terrible thunderstorms every afternoon during the summer of 2014, with lightning strikes occurring all over. When I got to the crest below Devil’s Peak, I found I had fires brewing in the distance on three sides of me. I called my wife with my satellite phone; she in turn called the Forest Service to relay my location and situation. They were able to advise me on how to get through the area to Crater Lake safely. 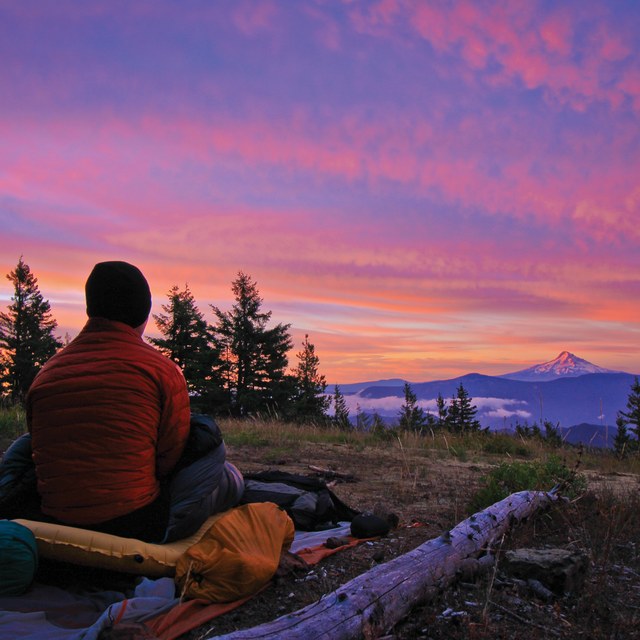 The PCT near Big Huckleberry Mountain. Photo by Tami Asars.

What’s your favorite section of your part of the PCT and why?

Tami: Every section in Washington has something to offer, but since I’m such a fan of solitude, my favorite sections are Stevens Pass to Rainy Pass or Rainy Pass to Manning Park, B.C. Both offer quiet backcountry places that serve as a respite from our busy brains and hectic schedules.

Eli: That would probably be the Three Sisters Wilderness area, in central Oregon. It has such a plethora of scenic diversity. You get to skirt along the base of some of Oregon’s highest peaks, all capped with big glaciers, all the while traipsing through alpine meadows, past pretty lakes, through lush forest and across volcanic lava beds. It’s like taking all of the best of Oregon and compressing it into a single stretch that can be hiked in just three or four days.

Why are you excited about this new book? Why will people love it?

Tami: There is nothing quite like the birth of a new guidebook! The feedback I’ve received to date has been very favorable and it’s truly a guide I wrote for you—my friends/readers. I want people to have the very best experience they possibly can when they challenge themselves on the PCT. After all, I believe the world would be a better place if everyone had the chance to experience some soul shampoo by marinating in the grandiose backcountry.

Eli: I’m excited about its potential to make the PCT a more doable trail. When I mention the PCT to fellow hikers, the general response is, “Oh, I would love to do that, but don’t have the time, experience, endurance, etc.” That’s when I share that I’m not a thru-hiker either, but the PCT is very manageable in smaller pieces. When they hear that, they suddenly get excited at the potential that maybe they actually can hike the PCT. Plus, these will be the most up-to-date and comprehensive guides for the PCT available, with a ton of info and features to help hikers plan and carry out their own PCT hikes, in a way that works with their own lifestyles.