Skip to content
GirlTrek: Walking as a Radical Act of Self-Care GirlTrek started as a hiking club. It quickly grew into a movement to reverse the systemic health crisis experienced by black women and transform the health and well-being of entire communities. https://www.wta.org/news/signpost/girltrek-walking-as-a-radical-act-of-self-care https://www.wta.org/news/signpost/girltrek-walking-as-a-radical-act-of-self-care/@@download/image/girltrek.jpg

GirlTrek: Walking as a Radical Act of Self-Care

GirlTrek started as a hiking club. It quickly grew into a movement to reverse the systemic health crisis experienced by black women and transform the health and well-being of entire communities.

The founders of GirlTrek, a national public health nonprofit for black women and girls, are counting on the incredible power of walking as the path to a movement for nationwide change. 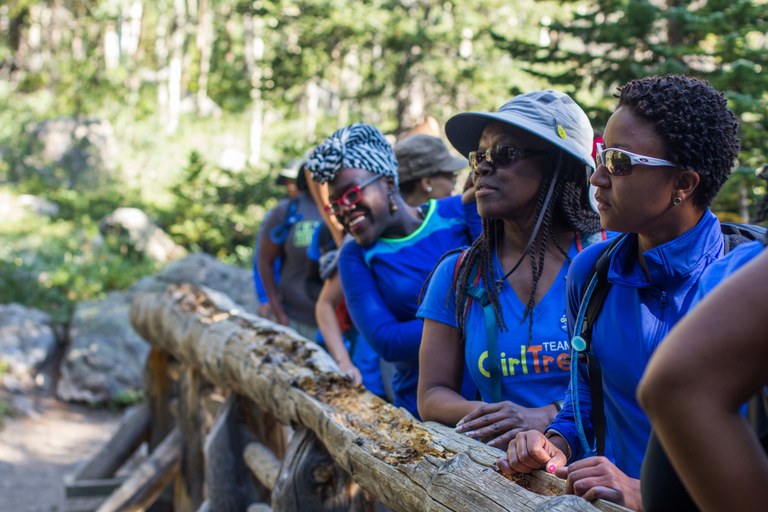 In their iconic blue shirts, the women of GirlTrek walk for health, healing and change. Photo courtesy of GirlTrek.

Vanessa Garrison (a Seattle local) and T. Morgan Dixon (a former history teacher) established GirlTrek in direct response to the systemic health crisis experienced by black women today. It began as a hiking club for the students in Morgan’s class. But the women decided that didn’t go far enough.

It’s a movement with ambitious goals: to mobilize one million black women to walk — for at least 30 minutes, 5 days a week — to reverse the devastating impacts of chronic illness and obesity by 2020. And in mobilizing black women and rallying allies to their side, the organization hopes to transform the health and well-being of entire communities, and inspire a global solution for women.

“Walking is the single most powerful thing that a woman can do for her health. Because from Harriet Tubman to the women in Montgomery, when women walk, things change,” Morgan said.

From its inception, the organization has recognized walking as a cultural inheritance and has taken inspiration from their ancestors and other civil rights heroes, women like Ella Baker, Septima Clark and Fanny Lou Hamer. Earlier this year, the GirlTrek staff followed in the literal footsteps of Harriet Tubman, walking 100 miles to trace her escape along the Underground Railroad.

“It was arduous, it was grueling, it was spiritually enlightening. It was all of those things, but we walked it to pay homage to Harriet Tubman and to all of the women and black people who lived before us and who used movement to free themselves,” said jewel bush, the organization’s national director of communications. “Harriet Tubman basically walked herself to freedom. The determination and courage and wherewithal that it takes to fathom that in the age of chattel slavery is monumental. We recognize that we are part of a legacy, and we want to build upon it and walk in that light.”

And they are just getting started. The organization has embarked on a 50-stop “Road to Selma” national tour that will arrive in Seattle in August. It will be a return home for Vanessa, who celebrated her 40th birthday last fall by summiting Mount Kilimanjaro.

While GirlTrek organizes a summer hiking series on public lands across the country, the movement holds its focus on encouraging black women and girls to move together, period.

“There is a beautiful resurgence of black people in the outdoors,” jewel said. “But here at GirlTrek it doesn’t matter where a woman walks. The visibility of women walking together in their neighborhoods builds community. It helps young people, it helps older people. The point is to get out there and move.”

It’s a movement built by putting one foot in front of the other, by encouraging women who have put their families, jobs and communities first to do this small, radical act of self-care. Hundreds of thousands of women have answered the call and started walking. Now, they’re reaching out to encourage others to do the same, and breaking down barriers to walking.

This article originally appeared in the July+August 2018 issue of Washington Trails magazine. Support trails as a member of WTA to get your one-year subscription to the magazine.