A few months ago, the Government Accountability Office (GAO) released a report to Congress about U.S. Forest Service trails. The message: "Long- and short-term improvements could reduce maintenance backlog and enhance system sustainability."

2012 funding only covered maintenance on 37 percent of trails

The report underscored a fact that hikers are keenly aware of, in that the Forest Service has more miles of trail than it is able to maintain given current funding, and the result is a persistent maintenance backlog that has negative effects on both the experience of recreationists and the environment. The report also gave this backlog a number that may surprise hikers.

In fiscal year 2012, the agency reported that it accomplished maintenance on only 37 percent of trails and that its maintenance backlog amounts to $314 million nationwide. (By comparison, the recent government shutdown cost more than $300 million per day.) What’s more, the Forest Service estimates that only one-quarter of its trails meet agency standards. 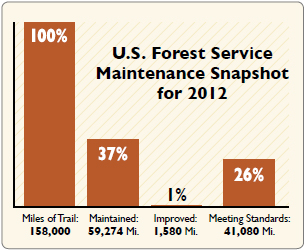 Of the 158,000 miles of Forest Service trails, funding only covers a mere portion of maintenance and improvements.

In compiling the findings and making recommendations, the GAO interviewed 16 nonprofit organizations that spanned the recreation spectrum nationwide, including Washington Trails Association. We were asked our views on challenges faced by the Forest Service in performing trail maintenance and our opinion on ways that it could be improved.

As a result of the study, the GAO recommended, among other actions, that the Forest Service:

What could it mean for the future? Without new budget allocations, the Forest Service will rely more and more on volunteer labor to maintain trails. It’s also possible that some trails will be dropped from the inventory and allowed to return to nature.

Join the fight for trail funding

The chronic lack of funding for trails is something that WTA will be focusing on in 2014. It is critical that programs such as the Northwest Forest Pass are reauthorized if we are to keep funding flowing to maintain our current trails. Look for ways that you, as a hiker, can get involved to support trails

This article originally appeared in the Jan+Feb 2014 issue of Washington Trails magazine. Join WTA to get your one-year subscription.