Skip to content
Horses and Handsaws: Repairing Trails with the Help of Back Country Horsemen Each year, several of WTA's Volunteer Vacations and Backcountry Response Teams (BCRTs) are supported by Back Country Horsemen of Washington (BCHW). This year, WTA employees got a firsthand look at what goes into repairing trails with the help of a pack string. https://www.wta.org/news/signpost/horses-and-handsaws-repairing-trails-with-the-help-of-back-country-horsemen https://www.wta.org/news/signpost/horses-and-handsaws-repairing-trails-with-the-help-of-back-country-horsemen/@@download/image/bchw-fog_karen-daubet.jpg

Horses and Handsaws: Repairing Trails with the Help of Back Country Horsemen

Each year, several of WTA's Volunteer Vacations and Backcountry Response Teams (BCRTs) are supported by Back Country Horsemen of Washington (BCHW). This year, WTA employees got a firsthand look at what goes into repairing trails with the help of a pack string.

Each year, several of WTA's backcountry trips are supported by Back Country Horsemen of Washington (BCHW). Using a pack string made up of horses and mules, Back Country Horsemen loads and packs in all the gear that the work party needs for the duration of the trip. This means the volunteers only have to carry the gear they need for a day hike to camp, as well as the tools required to tackle trail maintenance along the way.

Because there's less weight on their backs, a crew can get more trail work done as they make their way towards camp. Sometimes, the Back Country Horsemen crew even stays and helps work the trail. Other times, they return on the last day, when they rejoin the crew to pack everything up and head back to the trailhead.

This summer, a couple of WTA staffers found out firsthand what it takes to work with a pack string on a couple of special backcountry trips.

Later in the summer, WTA held back-to-back week-long trips at Excelsior Pass in late August, and the support of Backcountry Horsemen was instrumental for providing supplies. WTA's Executive Director Karen Daubert rode in with a team of three Back Country Horsemen when they brought the initial drop of supplies to the first volunteer vacation.

A week later, Field Programs Manager Tim Van Beek rode with the Back Country Horsemen crew going in to resupply the second trip and take out some of the trash from the first week.

WTA has always appreciated the support of our riding partners, but both staffers said that there is nothing quite like time spent on trail together to renew mutual respect and joint commitment to the future of Washington's trails. 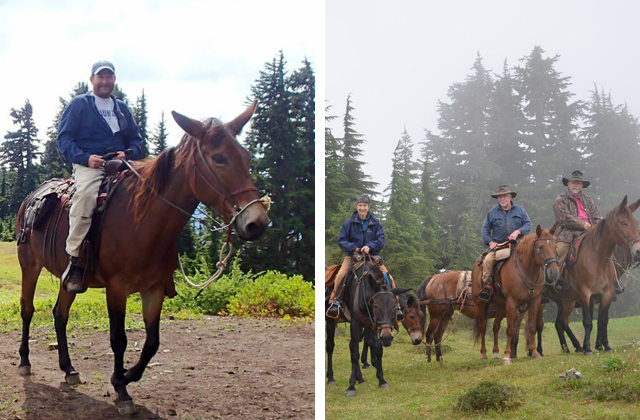 Earlier this summer, a WTA Backcountry Response team crew banded together with the Back Country Horsemen for a four-day work party. The result? A Herculean effort to clear more than nine miles of a trail that hadn't seen maintenance in more than 15 years.

Thanks to efforts from the combined crews, the Clear Fork Trail from the trailhead to Tieton Pass in the Goat Rocks Wilderness is now "...open, restored, and spectacular," according to Karen Daubert in her trip report from the trip. 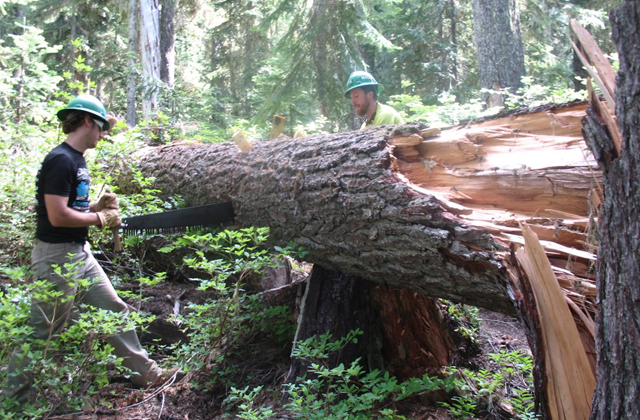 The Clear Fork BCRT was able to clear more than one hundred trees over four days thanks to help from BCHW. Photo by Bullseye.

Both organizations working together with stock support made a huge difference in the amount of work the crew was able to accomplish. Over the four-days, six saws were used to remove 114 logs.

"Many of the logs were major challenges because of the size, location, and topography, yet they were all successfully removed without incident," reported Tom Faubion, crew leader for BCH.

"I have never experienced such difficult but rewarding work with such positive and supportive partners," said a tired but happy Daubert.

"The work party was an affirmation of the quality relationship between the hiker and stock organizations," Faubion added. "Over the years, the two groups working together have cleared miles of trails that may well have been abandoned were it not for the trail work we accomplished."

WTA looks forward to many more years of cooperation with BCHW, a valuable partner for our backcountry trail maintenance trips.

Tips for hiking on trails with horses 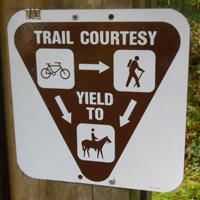 Do you know what to do when you see a horse on trail? It's good to be aware of trail courtesy, particularly on multi-use trails where you're likely to see stock.