Skip to content
Learning to Get Along Before the internet, websites, blogs and social media, hikers and land managers lacked opportunities to communicate and stay connected. https://www.wta.org/news/signpost/learning-to-get-along https://www.wta.org/news/signpost/learning-to-get-along/@@download/image/history_bouldercreek_rick.ells.jpg

Learning to Get Along

Before the internet, websites, blogs and social media, hikers and land managers lacked opportunities to communicate and stay connected.

Before the Internet, websites, blogs and social media, hikers and land managers lacked opportunities to communicate with each other. When hiking and backpacking surged in the late 1960s, the U.S. Forest Service found itself under increasing pressure to manage the land to accommodate hikers—a dramatic and challenging shift in focus when its primary purpose had been managing forestry. The change brought confusion, misperception, misinterpretation and misunderstandings about land management, as rumors were rampant, and the chasm of skepticism widened between hikers and the Forest Service.

The introduction of Signpost opened the line of communication between hikers and agencies, and though it almost folded several times in its early years, it eventually became recognized as an effective channel for hikers and managers to converse. To encourage engagement with the hiking community, land managers were sent complimentary issues. The Snoqualmie National Forest showed its appreciation for the newsletter in 1969, by being the first agency to purchase a subscription for each of its ranger districts, bringing the number of subscribers to 325. 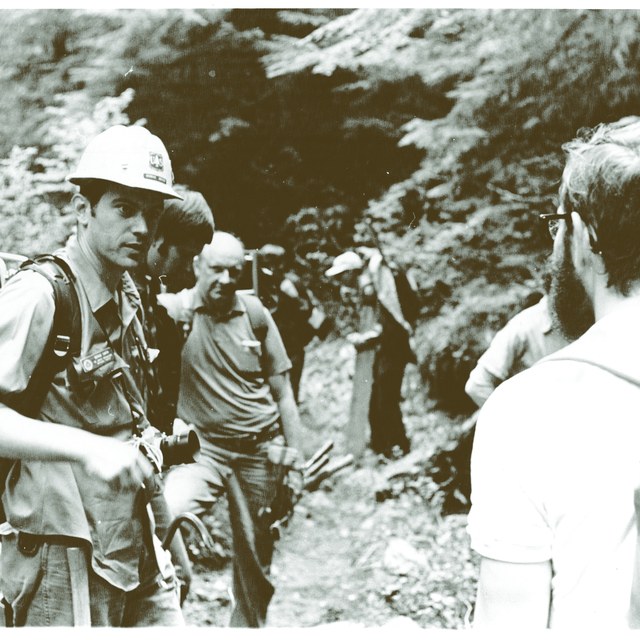 Bernie Smith (left), on the Boulder River (then called Boulder Creek) work party with WTA in 1975. Photo by Rick Ells.

Bernie Smith, of the Mt. Baker–Snoqualmie National Forest’s Darrington District, was quick to adopt this new line of communication. Though popular with hikers, the Darrington District was managed primarily for logging. Recreation management was a mystery to the district, and Smith’s title reflected that:

“My business card said, ‘Other Resources Assistant,’” he said in a recent interview. Of the large staff then at Darrington, a town humming with loggers, Smith recalls, “There was fire, timber and silviculture. I was fish, biology, wilderness and trails. It was a pretty lonely life for a sole recreation person!”

When Louise Marshall approached Smith in 1975 about a Signpost-sponsored work party, he jumped at the chance. Several Signposters joined Marshall and Smith for a day of work on the Boulder River Trail, where they helped deconstruct aging and rotting forest shelters.

Smith enjoyed working with the volunteers, “It was an opportunity to connect with hikers. I learned what they like and what they don’t like.”

Signpost, and the fledgling WTA, made a big impact on Smith. After retirement from the Forest Service in the 1980s, Smith served on WTA’s board of directors.

Read more about our history and anniversary at wta.org/50