Skip to content
Lopping in a Winter Wonderland: Creative Trail Maintenance in Spokane When we think about trail maintenance, a winter wonderland isn’t usually the first setting that comes to mind. But this winter in Spokane, volunteer crew leader Jane Baker proved it can work, and you can have a lot of fun doing it. https://www.wta.org/news/signpost/loppers-in-a-winter-wonderland-spokane-crew-leader-finds-creative-ways-to-volunteer-in-the-snow https://www.wta.org/news/signpost/loppers-in-a-winter-wonderland-spokane-crew-leader-finds-creative-ways-to-volunteer-in-the-snow/@@download/image/20190130_094000.jpg

Lopping in a Winter Wonderland: Creative Trail Maintenance in Spokane

When we think about trail maintenance, a winter wonderland isn’t usually the first setting that comes to mind. But this winter in Spokane, volunteer crew leader Jane Baker proved it can work, and you can have a lot of fun doing it.

“Should we wear snowshoes or microspikes?”

“I remembered my avalanche shovel this time!”

These are not the usual things overheard at the trailhead on the morning of a WTA work party, but Allie and I weren't at a usual WTA event. There were several feet of snow on the ground, which is usually cause for canceling a work party, but we were still getting ready to spend the day improving a trail.

The crew before heading to work. Photo by Allie Tripp.

AIlie, myself and 17 volunteers were attending the last of a four-part series of work parties held on snowshoes. The other three had taken place earlier in the month, and had been a rousing success. At each one, volunteers strapped on their snowshoes (or microspikes, depending on snow depth or firmness), and headed out on Mount Spokane’s snow-covered trails with loppers and pole saws in hand.

Branches heavy with snow often impede trails for snowshoers, cross country skiers and other winter trail users. The depth of snow also raises winter trail users into areas that are not typically brushed for summer hikers. So, while we knew we couldn't do much for the trail itself, we could certainly prune back branches laden with snow encroaching on trail.

We looked high and low, sometimes uncovering them with avalanche shovels. Working on several feet of snow was advantageous, though, when trying to reach high branches. Several snowshoers expressed their thanks as they passed us while we worked. 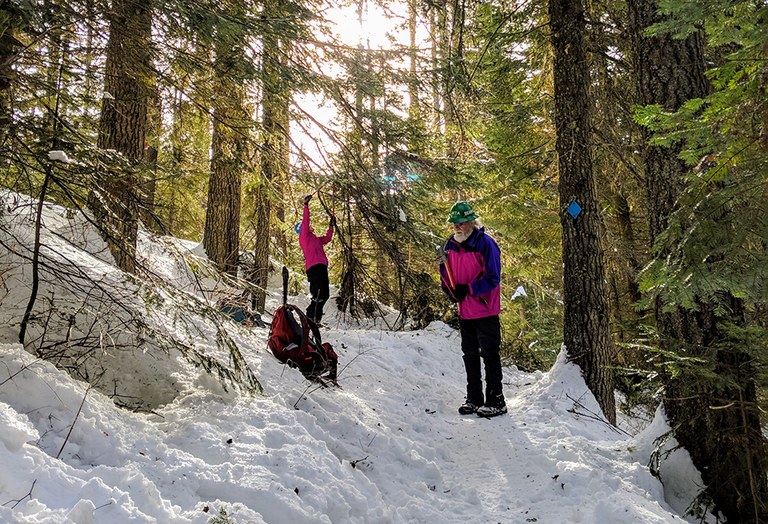 Volunteer Crew Leader Jane Baker lops a branch while another volunteer gets ready to work. Photo by Janée Romesberg.

Plus, it was a blast! We thoroughly enjoyed tromping along in our microspikes (the trail was firm enough to keep our snowshoes in the car) checking the trail corridor for culprit branches. Not only was it a fun and creative volunteer opportunity, we were also performing quality, valuable trail maintenance.

Jane created this series to provide folks in the Spokane area with winter volunteer opportunities - historically the “off” season for Eastern Washington trail maintenance because of snow cover.

"I first got the idea of wintertime brushing work parties from having done this on both snowshoe and cross country ski trips with friends. The snowshoe trails in particular need help as there are no dedicated volunteers for that user group." 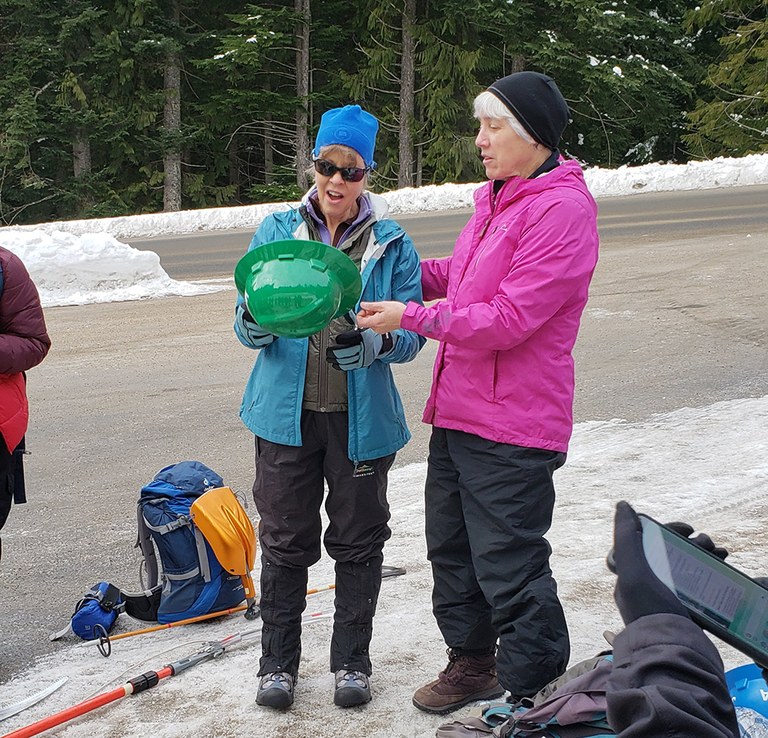 A volunteer at Mount Spokane earns her green hat, an award you get after volunteering for 5 days with WTA. Photo by Allie Tripp.

She wasn’t sure how popular they would be, but she didn't need to worry. Volunteers were thrilled to have the chance to work on trails despite the cold and snow.

According to Jane, "the most rewarding aspect of this project was the tremendous response of our volunteers who appreciated a chance to do some trailwork in mid winter when the ground is frozen and covered over."

On the work party we attended, one volunteer drove from Seattle because it was a snowshoe work party. It was one person's very first day of volunteering. Many others showed up for the entire series. 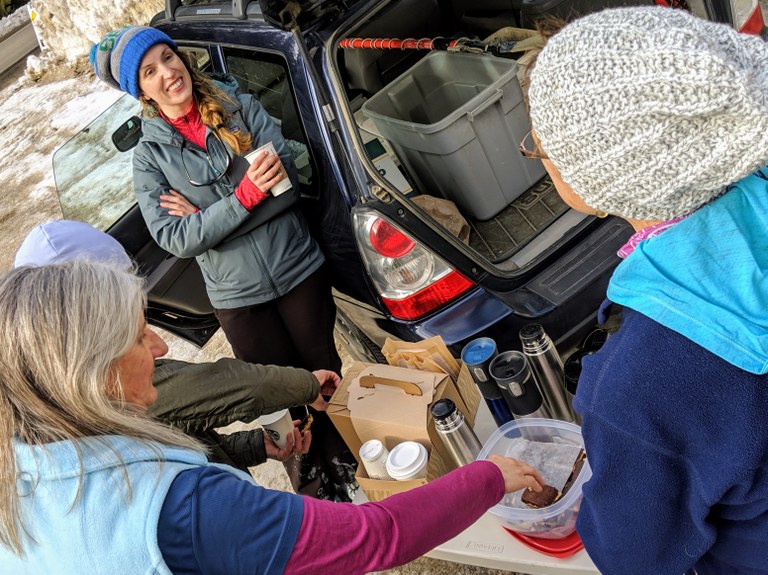 After the work was over for the day, all 19 members of the crew gathered around Jane’s Subaru to debrief, enjoy hot drinks out of 20+ thermoses Jane packed from home and enjoy to-die-for homemade brownies brought by another volunteer, Mary.

"I am sure we will add this volunteer opportunity to our annual project list," says Jane. "It appears that the work will be endless as the height of the trail goes up or down 4 to 6 feet every season."

Get your snowshoes ready!

Snow not really your deal? We've got loads of backcountry trips coming this season where you'll (probably) stay nice and dry.