Skip to content
Meet J.R. Harris, Outdoor Enthusiast and Author of "Way Out There" J.R. Harris is a hiker, backpacker, and proud New Yorker. A collection of stories from J.R.’s wilderness exploits from the Arctic to Australia, and everywhere in between, can be found in his debut book, “Way Out There,” from Mountaineers Books. https://www.wta.org/news/signpost/meet-j-r-harris-outdoor-enthusiast-and-author-of-way-out-there https://www.wta.org/news/signpost/meet-j-r-harris-outdoor-enthusiast-and-author-of-way-out-there/@@download/image/Way Out There.JPG

Meet J.R. Harris, Outdoor Enthusiast and Author of "Way Out There"

J.R. Harris is a hiker, backpacker, and proud New Yorker. A collection of stories from J.R.’s wilderness exploits from the Arctic to Australia, and everywhere in between, can be found in his debut book, “Way Out There,” from Mountaineers Books.

It is awe inspiring watching J.R. Harris prop his well-worn pack on his knee and toss what must have been 60 pounds swiftly over his shoulders. It’s clearly a well-practiced move. In the blink of an eye, the svelte septuagenarian balanced, buckled and adjusted his pack, then marched down the Longmire parking lot to the Wonderland trailhead. 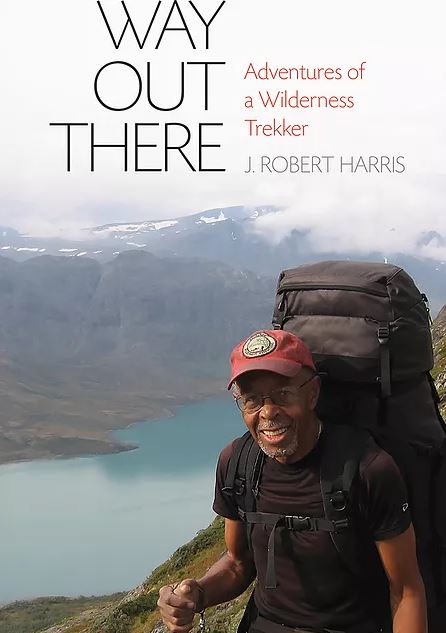 This trip had been on J.R.’s radar for at least a decade, and despite the threat of an impending snowstorm, he bubbled with childlike excitement at the prospect of finally ticking the Wonderland off his list.

J.R. is a proud New Yorker who readily shares his enthusiasm for the city’s dizzying bustle. So it’s easy to see how his work running a successful marketing agency led to his 2016 induction into the Market Research Hall of Fame. Yet despite J.R.’s dazzling New York City life, his wilderness expeditions define him and play a central role in his life.

“I love everything about New York City, but I also love the simplicity of being ‘out there’ alone. People sometimes don’t realize that in the backcountry simple doesn’t mean easier. Simple means harder because you are living a simpler way.”

J.R. was born and raised in Brooklyn, where his parents were anxious to keep him out of the gangs that claim most young men from the projects. Despite J.R.’s objections, they enrolled him in the Boy Scouts in 1956 at age 13. “Among guys in my neighborhood, a Boy Scout was often considered wimpy and nerdy. I had never been in the mountains and I didn’t want to be sent away, stuck for six weeks with the wimps and nerds.”

Luckily, resistance was futile, and after just one summer in the heart of the Adirondacks with Boy Scout Troop 318 at Alpine Scout Camp, J.R. was hooked. He returned again the following year, and for many years after that. As he learned skills for compass reading, map navigation and wilderness survival, J.R.’s curiosity blossomed and his love of wild places grew.

His ever-more-ambitious exploration led to a spontaneous road trip from New York City to the end of the northernmost road in Alaska and sparked a lifelong love affair with being “way out there.” In 1993, J.R.’s extraordinary journeys earned him a place in the prestigious Explorers Club.

“A curious mind may never be satisfied, but if you remain inquisitive, it will always be gratified."

Back on the Wonderland Trail, on his umpteenth backcountry trip, J.R. kept a slow but steady pace up the steep trail to Rampart Ridge. He graciously allowed me to crash his trip until Kautz Creek, which gave me a glimpse into the exploits of a preferred soloist. Between amazing stories of his travels across dozens of countries on all six nonfrozen continents over six decades, he confessed that he lost count of how many treks he has been on.

“I keep a diary of all my big trips, so I guess I can just go through and count them,” he said, “but I know I’ve done at least 40 trips longer than two weeks.”

A collection of stories from J.R.’s wilderness exploits from the Arctic to Australia, and everywhere in between, can be found in his debut book, Way Out There, from Mountaineers Books.

This article originally appeared in the November+December 2017 issue of Washington Trails Magazine. Support trails as a member of WTA to get your one-year subscription to the magazine