Skip to content
Meet the Trail Community: Bow Hunter Gregg Bafundo hunts and forages on trails near his home in Tonasket. Read how he uses trails to participate more fully in the natural world. https://www.wta.org/news/signpost/meet-the-trail-community-bow-hunter https://www.wta.org/news/signpost/meet-the-trail-community-bow-hunter/@@download/image/main-image.jpg

Gregg Bafundo hunts and forages on trails near his home in Tonasket. Read how he uses trails to participate more fully in the natural world.

On a snow-covered trail leading into the Pasayten Wilderness, Gregg Bafundo strides ahead of me, carrying his traditional bow, handmade from yew and tiger myrtle by a friend. He’s got eight razor-sharp carbon and aluminum arrows mounted in the accompanying quiver, and his dog Bode dashes ahead of us, playing in the snow with more energy than either of us have. As we hike, I eye the graceful bow and slender arrows. It seems unbelievable that something that looks so fragile can bring down a deer, so before I really think through what the answer has to be I ask, “What can you hunt with that?”

Patiently he replies, “I get that question a lot. And I usually tell people, ‘Think back to before Columbus got to America. What were the Sioux killing buffalo with? They were using a bow.’ That’s one of the allures of using a traditional bow to hunt, instead of a modern compound bow. I could go back in time and hand this bow to a Lakota or a Nez Perce and he’d know exactly what to do with it.” Heading into a snowy Pasayten Wilderness. Photo by Anna Roth.

Gregg’s passion for hunting is defined by connection. Connection to his surroundings, to the past, and to where his food comes from. He hikes and hunts to reinvigorate his connection to the natural world, and to unplug from the beeps and pings of the emails and phone calls of the workaday world.

While technology has created modern conveniences that connect people across the state, Gregg thinks it has also divorced many people from the natural world in the most basic way. 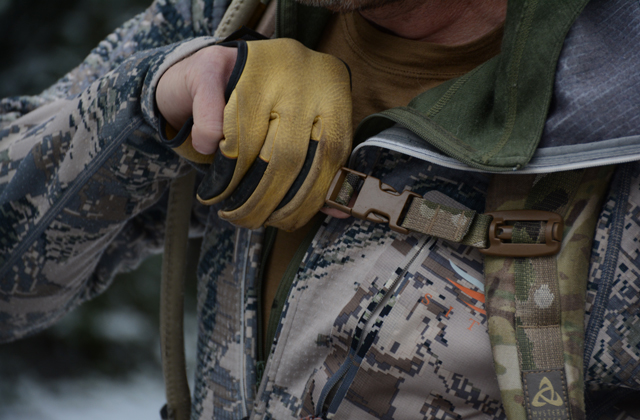 "Society is so removed from its past and the things that fuel it. We buy organic food because it’s good for the environment, but do you really know where your food comes from? The locality of your food is way more important than the organic quality of your food. I shopped at PCC for years, and in the middle of winter I would buy organic avocados. Then I thought, 'This avocado was put on a megaship or a plane and shipped here. So I’m contributing to burning thousands of gallons of fuel to eat an avocado in winter. ' "

After he made this connection, the importance of hunting and locally sourced food rose in Gregg’s priorities. So for him, hunting’s not about mounting antlers on a wall. It’s about his connection to the land, its animals and how people used to get along. Which is largely why he bow hunts.

“I choose to hunt in the most difficult way because I want to remember how we used to gather our food just a few generations ago. I want to reach back into my past and relate to the people who came before us. Years ago, I rubbed two sticks together and made fire, and that was a religious experience for me because I felt the power behind why humanity has survived. I feel that again and again when I harvest or hunt my own food.” Bow hunting requires patience and creates a connection to the land that other forms of hunting can't. Photo by Anna Roth.

The cyclic nature of hunting appeals to Gregg, too.

“For me, the trophy is the meat. I use as much of the animal as I can. Of course I eat the meat, but marrow bones make soup, and I try to use most of the organs. And I haven’t done this yet, but I know some people who use the intestines to make sausage. I make fishing flies with deer gut, and in the spring, I use those flies to catch fish. Then I’ll forage for wild asparagus and mushrooms, and then I have a meal I’ve gathered entirely from the land.”

Eating foraged and caught food is a lesson in patience. It can take all day, but it’s appealing to Gregg when 100 percent of what he’s eating is from the dirt he lives on and around.

So how did he come to appreciate the self-reliance hunting offers? He’d always loved shooting sports, and spending 10 years in the Marines after high school allowed him plenty of time to get comfortable around firearms. At the same time, he was climbing and traveling all over the world, and enjoying himself immensely but felt like he was missing something.

“I realized I was an observer. And I wanted to participate in the world around me.”

So he started hunting. 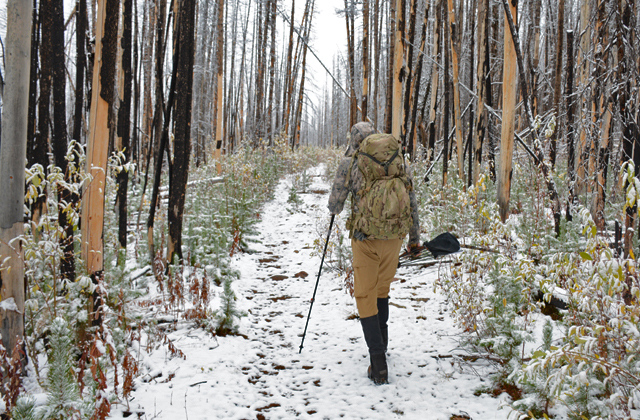 Gregg hunts to connect in a more participatory way to nature. Photo by Anna Roth.

“When you’re hunting, you become an entity that is working and living in the natural system as it has worked for years. Everything, in order to survive, does so at the expense of something else. A tomato gets its nutrients from the soil, a bear eats berries and other critters –- if we want to eat, we kill something, whether we’re firsthand involved in it or not. I wanted to be firsthand involved. That’s the participation I was looking for. And it’s been really rewarding.”

Bow hunting came shortly after an encounter Gregg had with a deer while rifle hunting. It was the end of the day and he wasn’t planning on taking the doe down, but he felt motivated to try and get as close to it as possible.

“I was so close -– on one side of the tree that the deer was on the other side of, and I just went to touch her, and the wind shifted and she ran off. I was so disappointed, but getting so close to her was so exciting. I knew bow hunting required being really close to your targets, so I started looking into bow hunting, and I really do that more than anything now.” 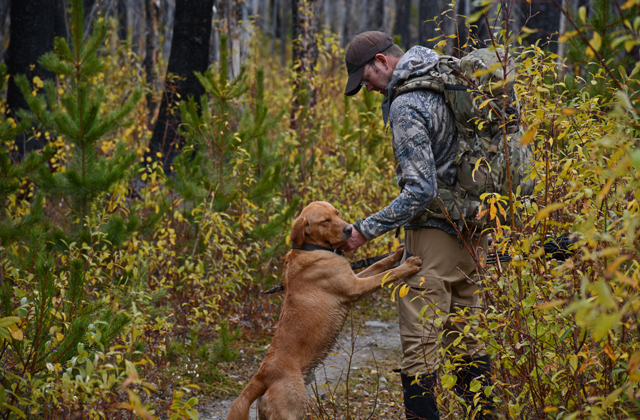 The quiet focus of the hunt

I saw that need for proximity play out the day I went hiking with Gregg. We were grouse-hunting, but Gregg did have all his tags with him, just in case big game became an option. And it very nearly did. As we walked back from Sunny Pass, a flicker in the brush caught my eye. Three deer, then four, then five materialized in the backdrop of stark larch trunks and willows. Gregg and I got quiet; even Bode knew to stop running around and sit still. Gregg approached them and I held Bode back thinking, ‘I might get to help pack out a deer today.’

The does stayed stock still, looking at us as Gregg crept closer, but before he could get within range, they bounded away, and we resumed our hike back. As we walked, I remarked how close Gregg had gotten to the deer, and he reminded me that part of the challenge of bow hunting is to get close enough to the animal to make the shot.

“These bows don’t have the range of a more modern bow or gun, so I have to be within sixty feet to get a good shot.” The silver-gray tree on the immediate right edge of the trail in this image is about as close to Gregg as he needs to be for a clear shot on an animal. Photo by Anna Roth.

The patience that hunting requires means Gregg and other bow hunters spend a lot of time watching wildlife. Whether they’re tracking an animal or sitting in a blind waiting for one to pass, hunters sometimes spend hours examining their surroundings. And Gregg’s logged a lot of observing hours. He often gets to be part of an animal’s habitat in the natural world.

“A lot of stuff comes to you but doesn’t see you or isn’t afraid of you. I’ve had birds land of my shoulder, I’ve had field mice curl up next to me and sleep. Those are the kind of things hunting forces you to see, when you slow down.”

Respecting the land and its animals

And those are the kinds of things that spending time on public lands afford anyone who has the time, interest, and patience to pursue.

"Most hunters I know are pro-public lands. They might not understand the policy part of it, but they take advantage of them every season. I have a friend who’s a Tea Party Republican, and he visits the Pasayten every year to hunt. He loves coming here because he appreciates that he can access public lands because he owns them.” Public lands offer recreation opportunities to the people who own them -- the American public. Photo by Urmi.

Public lands and the trails leading into them allow Gregg and hunters like him to live a sustainable life, one where they can connect to nature and live off what the land has to offer. So for Gregg, reducing the concept of hunting to a “sport” undermines the value of it. An appreciation for and practicing responsible hunting and archery is important to Gregg, so other sportsmen who illustrate this ethic sit high in his esteem. He recommends checking out Steven Rinella’s Meat Eater, broadcast on Sportsman’s channel, or Randy Newberg's Youtube channel. Both men focus on the meat as the reward for hunting, not simply counting how many are caught or how large the animal is.

“There’s no elation in the kill. No high-fiving. The deer I shot last season, I went up and held it afterwards and thanked it, apologized to it. Hunting is a time to respect the sacrifice the animal is making, not celebrate.”

He encourages everyone: “If you want to find out what hunting is all about, go spend some time with a hunter. I guarantee you’ll leave vastly different.” Gregg travels with a laminated list of ethics he wrote up years ago, to remind himself how to hunt (and live) responsibly. Photo by Anna Roth.

In addition to his work with the Okanogan Sportsmans Alliance, Gregg is also president of Traditional Bow Hunters of Washington, an organization that boasts 400 members across the state. The organization holds trainings and teaches people how to build bows as well as many other events all across the state all year round. Get involved or attend an event near you!

If you want tips for hiking safely during hunting season, get them here.

Thank you for writing this, Anna and WTA, and for sharing your story, Gregg. It's unfortunate that some Facebook commenters chose to voice disapproval with no recognition of hunting as a legitimate way to gather ethical, sustainable protein or experience uniquely deep connections with nature. Not to mention the vital contributions to conservation, trails and public lands that hunters provide through revenue from licenses and taxes on hunting equipment.

Thanks to you Anna and Gregg for sharing your story.

This was a wonderful read. Thank you for sharing, Gregg, and for being such a responsible steward of our ecosystem. This series has been so great to read, Anna! I have learned so much.