Skip to content
Meet the Trail Community: Dog Madigan's a 60-pound mutt who learned to love the outdoors and share trails with people and other pups. Now, his humans are learning how to take an older dog hiking. https://www.wta.org/news/signpost/meet-the-trail-community-dog https://www.wta.org/news/signpost/meet-the-trail-community-dog/@@download/image/madi_loren drummond.jpeg

Madigan's a 60-pound mutt who learned to love the outdoors and share trails with people and other pups. Now, his humans are learning how to take an older dog hiking.

Madigan, a 60-lb mutt with big Eeyore eyes, spent the first couple years of his life in West Virginia, and then another year with a foster family in the suburbs of Washington, D.C. When he came into our lives (and our tiny 500-square foot apartment) he seemed skeptical that he’d get to stay. Three other foster families had returned him; an escape artist with terrible separation anxiety, he had destroyed a few doors along the way. He was sweet, but subdued. Stoic. While he’d cuddle us, we didn’t see him wag his tail for nearly six months.

And then we took him hiking. 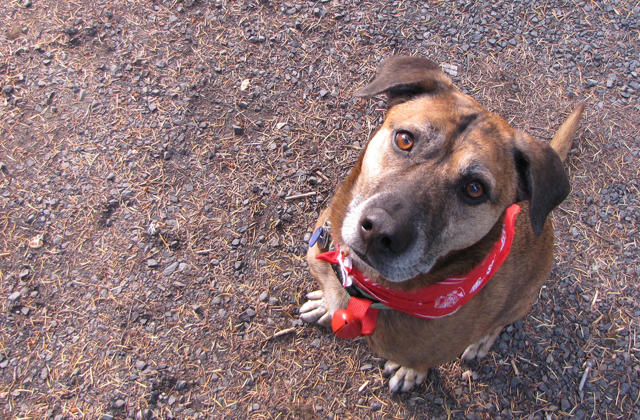 Those big Eeyore eyes are hard to resist. Photo by Loren Drummond.

Discovering the outside world

First along the trails of Rock Creek Park, the urban greenway running up the heart of Washington, D.C., and then later in the mountains and woods of Maryland and Virginia, we watched as he came alive. Something in those wild places eased his anxieties, replacing them with a goofy delight in the world around him. His black nose went to the trail, coming back up covered in a dusting of loam. His tail, so carefully stilled before, wagged furiously, urging us to move faster or announcing the smell of a creature’s passage before us. On our first backpacking trip together, he found his place at the foot of our sleeping bags, and settled into a deep, contented snore.

It’s the place he has slept—and snored from—for the last ten years of our outdoor adventures together. 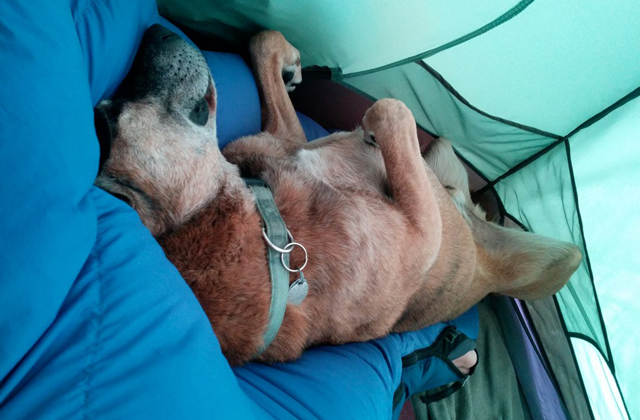 Madigan snoozing away in his usual spot. Photo by Loren Drummond.

The education of a trail dog (and his people)

Madigan settled into his place when we were out on trail, but the truth is we all had a lot to learn. Together that year, we made every mistake in the book. It’s embarrassing to admit now, but we let him charge ahead unleashed with calls of “he’s friendly!” that clearly did nothing to ease the worries other hikers who had no idea he was just running for the joy of it. He had (and still has) a habit of pooping a half-mile into every hike, and we occasionally left those bags there to pick up on our return, not thinking what that meant for hikers who came after us. He dragged us after deer and rabbits. Once, we lost him for ten terrifying minutes, when he bounded off into the woods and got his pack snagged in the brush.

While my wife and I had grown up hiking and camping, no one had taught us the etiquette or responsibilities of hiking with a dog. We watched others around us and made it up as we went along. So we made mistakes.

But over the course of that year, we all learned better. Madigan learned to heel behind us on trail, so that he didn’t pull my shoulder sockets out or drag us down the mountain in his wake. He learned to cross bridges made of open metal grating and narrow wood footbridges. He learned to pick his way carefully after us at river fords. 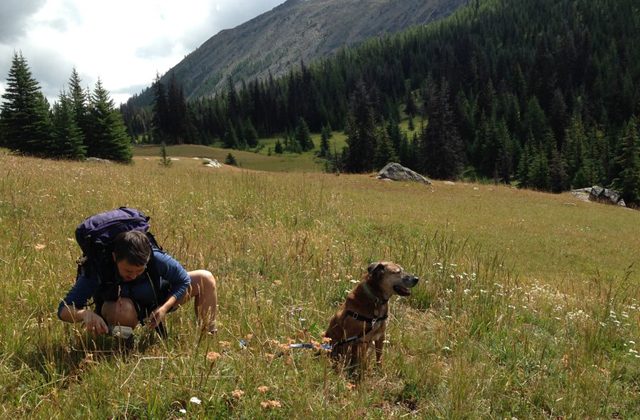 Cleaning up after Madi in Horseshoe Basin. Photo by Tyler LePard.

We learned what to stock in our first-aid kit to treat him when he cut his paw on snow or rocks. We bought a trowel and buried or packed out his waste.

He learned not to chase wildlife.

On a 2014 trip to Horseshoe Basin, Madigan sat near me on a rock a little ways from camp as I cooked dinner, watching the light play in distant clouds as a chipmunk inched closer to us. “No, buddy,” I told him, using my most serious voice. And even though that bold critter got within three feet of Madi, he stayed put, quivering with effort. 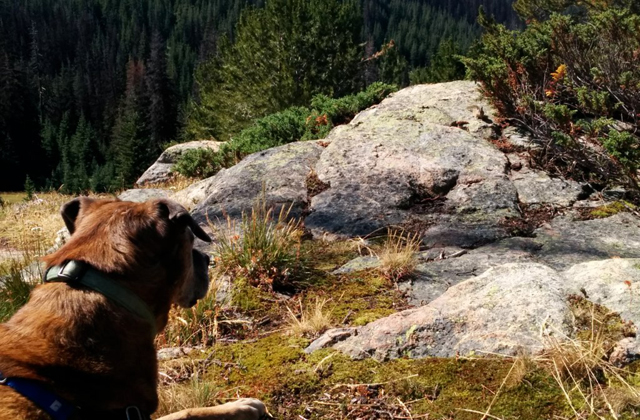 Madi displaying great restraint -- can you see the chipmunk in this photo? Photo by Loren Drummond.


Can you spot the chipmunk?

He’s become a near perfect trail dog. An ambassador for polite behavior. An example for our younger dog, Lula, who is still learning the ropes of good trail behavior. Except, now, sometimes, we have to leave him at home.

Last year, we planned a summer of backpacking, taking both dogs to Bean Creek in the Teanaway, on the Pacific Crest Trail north from White Pass, up past Bumping Lake to Blankenship Lakes. We hiked along the Lost Coast and up in the Sierras, camped our way north along Oregon’s beaches and coastal forests. We played as hard as we ever had, driven, in part by the knowledge that come fall, Madigan’s last big backpacking season would come to a close. 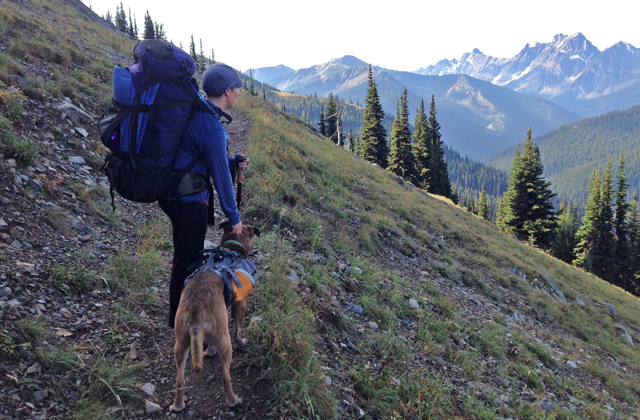 Over the years, Madi has grown white in the face. In dog years, he's pushing 90. He’s a spry 90, willing to bound and chase Lula around camp for a few minutes. Still, he’s aging, and it’s changed how we have had to think about hiking with him. We’ve shifted the load in his pack to our own. The woods still sing to his soul, firing up the desire to charge ahead. Now, though, we keep him leashed for different reasons. That thin strip of nylon running from his harness up to my hand keeps him from injuring himself with overexuberance.

We’ve retired him from hikes longer than 3 miles. Where once his thick undercoat kept him warm in the tent, he now wears a coat to sleep in. We replaced his hard foam pad with a cushier Therm-a-Rest I bought off a colleague for ten bucks. When it’s hot, we watch him carefully for overheating. We spoil him with cheese and peanut butter snacks when we stop for water. And sometimes, when the trip calls for something that will push his limits, we leave him in the care of friends. 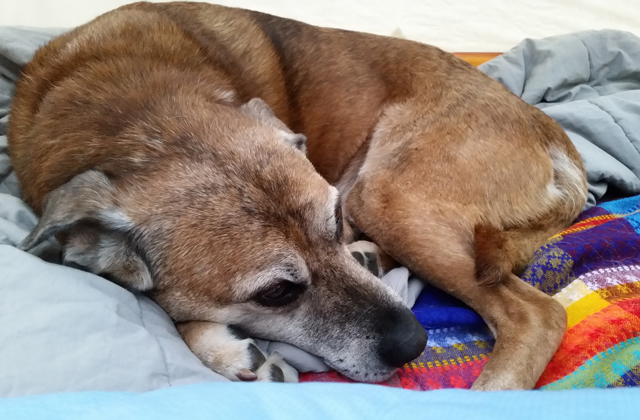 It’s hard for him to watch us pull out the packs, and then hear, “Sorry buddy, you have to stay.” His head will drop, and he’ll retreat to the couch, where he’ll watch the proceedings with his big, sad eyes.

It’s hard for us, too. We’ve discovered this state together. Nearly every memory we have from the last 10 years, from Ancient Lakes to Hart’s Pass, Lily Basin to Ruby Beach are colored with the shades of Madigan’s company, with his silly joy and antics. We’ve run into llamas, pack goats, elk and more than one bold chipmunk together. We’ve braved thunderstorms and black flies and gnarly river crossings. We’ve gotten soaked, and then dried out, basking on rocks in the sun. It’s strange to leave him.

So, we’re learning again. To hike together differently. To find the best local parks and easygoing rambles with plenty of places to stop and sniff around for a while. To go slowly, and let that be enough. To just be in nature, and let it work on us in the way that it has since the beginning, when it brought us together in the first place. 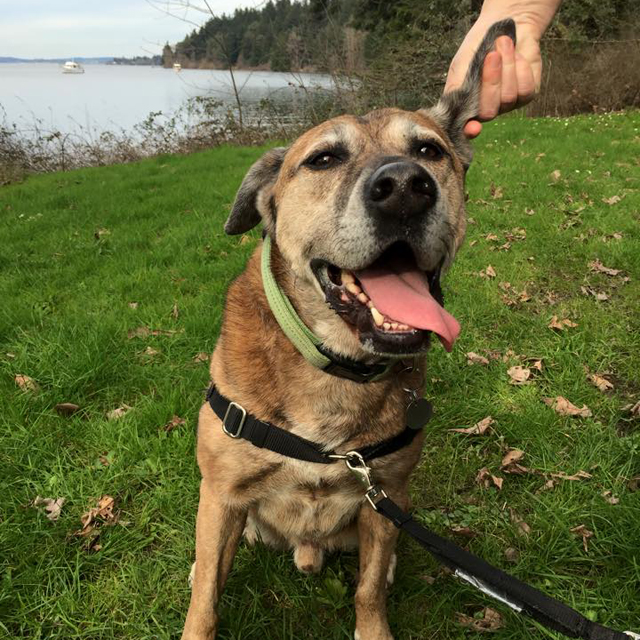 Madi enjoying the trails at a local park. They're the next step in his hiking adventure. Photo by Loren Drummond.

Love this story! You are lucky to have each other

Bob and Barb on Meet the Trail Community: Dog

We enjoyed your well written and touching story! I think Bob and I are reaching Madi's stage! :)!

Loren this made me tear up! What a great story.

Tears of joy and sadness

Thank you so much for sharing your sweet story! How lucky you are to have each other.

It was a pleasure to write about this aspect of my hiking life. We have been so lucky with Madi as our trail dog. He is just getting more wise and awesome every year.

Thank you so much for such an eloquently said story. What a life you have given this little one...just as he was fortunate to have you, you were fortunate to have him in your life. What a joy! We have a 1 yr old yellow lab with endless energy and I'm constantly comparing her to our dearly missed Golden Retriever Molly that we hold all our high standards too. She was the best trail dog-always staying within arms reach, checking back and forth frequently to make sure all 6 of us were together, never straying from the trail...I don't even remember training her to do this, she just "knew". Although I've got wet eyes and my throat has a lump as I write this, aren't we just so fortunate to have loved a pet in this way? I'm so happy for you and for Madi. What a life. Blessings.

Love it. Right now I hike with a friend and her dog, and we often are leaving her roommate's older dog behind, resulting in the same sad faces for all of us. We have scoped out close-by parks with trails perfect for the older dog, though, and we'll be on those, too!

Well done, Loren, on the story, on giving Madi such a good life, all of it. And you're killing me here, as I can't help hearing the distant tolling of the retirement bell for my own beloved canine hiker. Not yet though, so it's a good reminder to do as much as we can while we still can. Thanks!

My 13 yr old dog has had to retire from real 'hikes' but with care she can still do the easy round-town stuff - level, short, in mild temperatures. And something to keep in mind with older dogs - she's gone almost totally deaf, so the dog that used to come when called, can't hear me anymore, so has to stay on a long flexi-leash for her own safety as well as my peace of mind.

We just had to let go of our 18 yr & 8 months Rat Terrier who was quite the fighter and still hiking 2 weeks prior. Anything for the babies to make them as happy as possible. <3!!!

Thank you for this story. Heart warming.

Love your story and it too brought tears to my eyes. We also have an older dog, who is 13 and deaf, and have had to modify her hiking trips too.

Thank you for sharing this. My dog is 12 now, I adopted him over seven years ago and we really bonded through hiking together. Four years ago, we were hiking some of the most challenging trails in the area, now I am choosing flatter, shorter hikes for him with lots of shade and water (he loves to swim and play in streams). I cherish the time we can still spend together on the trail but also am trying to balance that with my own need to backpack and spend long days on the trail. Sounds like Madigan had a wonderful life hiking with you.