Skip to content
Nature On Trail: Great Horned Owl, Western Toad, Chanterelle Mushroom Northwest forests are teeming with life—much of which may go overlooked or unseen. On your next hike, look out for the little things and discover something new on your favorite trails. https://www.wta.org/news/signpost/nature-nook-sept-oct https://www.wta.org/news/signpost/nature-nook-sept-oct/@@download/image/Nature-Nook---Great-Horned-Owl.jpg

Northwest forests are teeming with life—much of which may go overlooked or unseen. On your next hike, look out for the little things and discover something new on your favorite trails.

Who gives a hoot? It does! Besides being the most widely distributed owl in the United States and having the most recognizable facial profile, the great horned owl hoots the familiar call of “ho-ho-hoo-hoo”—almost the exact answer a child would give when asked, “What does the owl say?”

In late fall, when mating season begins, owl calls are often heard at dusk or dark as the males and females begin their breeding cycles. Interestingly,this big owl does not make its own nest, but rather, it takes over one previously created by another bird. Keep your eyes upward as you walk through the forests this season, and look for “whitewash” and pellets on branches and rocks as clues to help spot them. 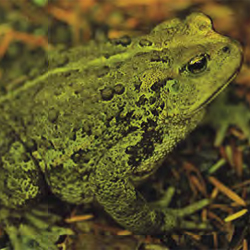 Known by the white- or cream-colored stripe down its dry, bumpy spine, the bulbous western toad is found throughout riparian landscapes across our region. These toads are true hibernators,snoozing for three to six months out of the year, waking to feed and mate during seasons when temperatures are warm and food is plentiful.

Use caution when hiking with Fido. When stressed, a toad can secrete a white poison that can cause problems when it hits a would-be predator’s mouth. Inflammation, nausea and, in extreme cases, death may occur if your dog tries to play.

Despite this amazing defense mechanism, western toads are docile creatures, just waiting for a juicy beetle to walk on by. 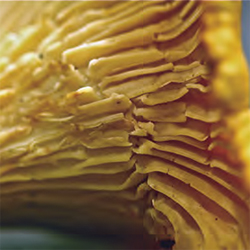 There is fungus among us! It’s the season for chefs in the Northwest to roam the forest under story near and far in search of their very own secret patch of chanterelles.

Found in clusters under mossy, moist forests,these gourmet delicacies are high in vitamin C, potassium and vitamin D. Having a woody or earthy flavor, chanterelles are savored in soups and sauces and added to veggies and meats, making foodies, flavor connoisseurs and choosy aficionados swoon with each spoonful.

If you are lucky enough to find your own chanterelle patch, make a positive ID,then gently cut them instead of pulling. Cutting ensures that the base remains intact and allows for continued propagation. Hungry yet?

This article originally appeared in the Sept+Oct 2013 issue of Washington Trails magazine. Join WTA to get your one-year subscription.