Hikers and trail advocates scored several big victories with the passage of a federal budget bill in Congress.

Hikers—you did it! Last year, we asked hikers to speak up for wildfire funding in Congress and more than 700 of you took action. Thanks to you and trail advocates across the country, federal wildfire funding is finally getting the attention it deserves.

The new 2018 Omnibus Appropriations bill will cut the current practice of "fire borrowing" by providing designated federal funds for wildfire management and allowing Forest Service budgets to be spent as they were intended—on recreation, services and programs. 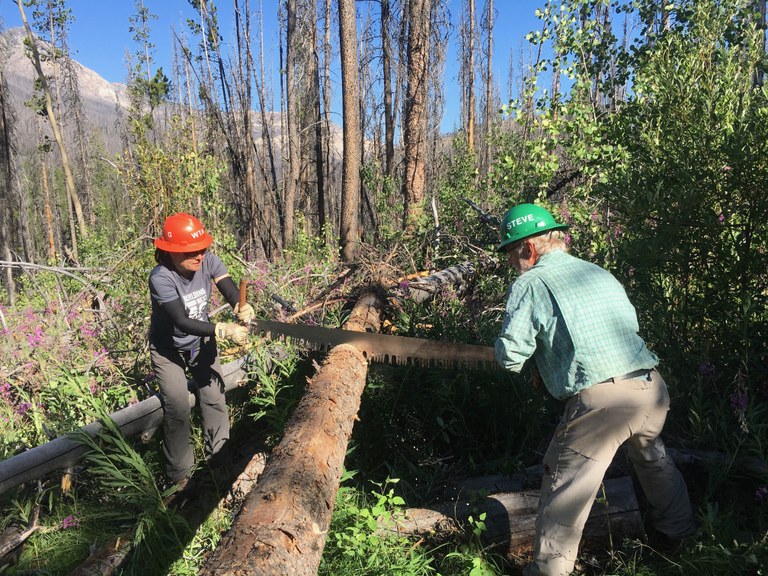 WTA volunteers in the Pasayten Wilderness within the Okanogan-Wenatchee National Forest help clear fallen logs from prior wildfires. The new wildfire fix will help keep more funding in Forest Service budgets for things like trail maintenance. Photo by Beth Macinko.

Until now, the bill for fighting wildfires has been covered by the Forest Service’s annual budget and treated no differently than any other regular agency program. Since 1995, the cost of wildfire management and suppression has surpassed the projections almost every year, resulting in major cuts to other programs. Fewer and fewer dollars have been spent on programs such as wildfire prevention efforts, trail and road maintenance and infrastructure updates. In 2017 alone, the Forest Service spent more than $2 billion on wildfire, which equates to 55 percent of the agency's entire budget.

As wildfires continue to grow more severe by the year, lawmakers agreed on a bipartisan solution that would save the Forest Service budget with the addition of a wildfire disaster fund.

Under the new bill, wildfire management will receive a comprehensive funding solution from the federal government. Rather than drawing from the Forest Service budget, wildfire funding will receive an additional fund—on top of their regular budget—to aid in fire management. The disaster relief budget will begin in 2020 as an additional $2.25 billion and will ramp up to $2.95 billion by 2027.

As less money is diverted from the Forest Service budget to fight fires, more funding will be available to keep forests healthy, conduct regular trail maintenance and complete necessary trail restoration work after a fire sweeps through.

WTA has advocated tirelessly for a wildfire funding fix, and are pleased to see that every member of Washington's congressional delegation co-sponsored the bill that finally brought a comprehensive, multi-year solution to wildfire funding.

Along with a solution for wildfire funding, the bill brought a few more bits of good news for hikers. The Roadless Rule Conservation Act of 2001 was recently threatened by a provision seeking to relax rules on the Tongass National Forest in Alaska. The loosened rules would have threatened the protections of millions of acres of forest service land across the country—including Washington.

Thankfully, the provision was removed from the Omnibus Appropriations bill, saving the integrity of the Roadless Rule.

Become An Advocate for Trails

Be a part of the movement creating big wins for trails and public lands by subscribing to our Trail Action Network. We'll send alerts and updates about important issues that affect hikers where you can make your voice heard for public lands.

Great news! Maybe now some of the FS funds can be used in prescribed burns or preventative thinning to lessen the negative impact of wildfires and restore 'normal'/functional fire regimes. Should have good impacts regardless.