Skip to content
WTA Works for Wildfire Funding Catastrophic wildfires have been increasing in severity and frequency for decades in Washington and across the United States. This difficult reality has had major consequences not just on the forests, but also on the U.S. Forest Service budget and the agency’s ability to complete trail maintenance, fire prevention and recreation projects. https://www.wta.org/news/signpost/wta-fights-for-wildfire-funding https://www.wta.org/news/signpost/wta-fights-for-wildfire-funding/@@download/image/2017_09_05-02.38.27.181-CDT.jpg

Catastrophic wildfires have been increasing in severity and frequency for decades in Washington and across the United States. This difficult reality has had major consequences not just on the forests, but also on the U.S. Forest Service budget and the agency’s ability to complete trail maintenance, fire prevention and recreation projects.

The wildfires this year have been heartbreaking, impacting many lives as well as treasured landscapes and trails. From the Pasayten Wilderness to the Columbia River Gorge, wildfires have transformed a number of landscapes for decades to come. 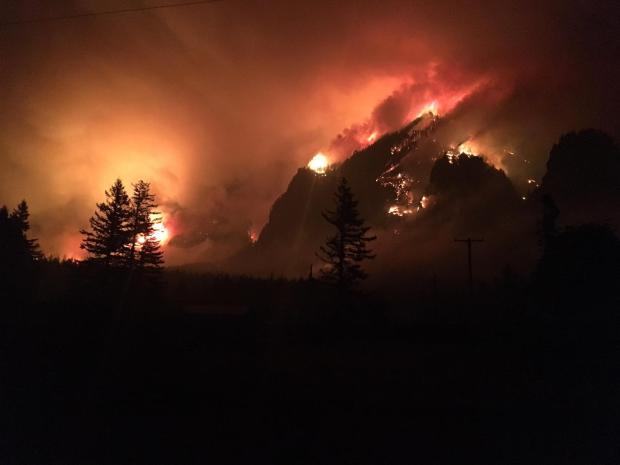 A Sept. 5, 2017 view of the devastating Eagle Creek Fire along the Columbia River Gorge. Photo via inciweb

Unfortunately, the severe wildfires this year are nothing new to Washington. Catastrophic wildfires have been increasing in severity and frequency for decades in Washington and across the United States.

This difficult reality has had major consequences not just on the forests, but also on the U.S. Forest Service budget and the agency’s ability to complete trail maintenance, fire prevention and recreation projects.

The cost of inadequate funding

Wildfires this year, like in years past, have impacted many miles of trails. As Washington begins to take stock of the impact and determine the work ahead, one issue presents a major obstacle: funding. Unfortunately, funding to fight wildfires has been a problem for more than a decade. Wildfires and the costs of fighting them are treated as a regular agency program and are included in the Forest Service’s annual budget, which is determined by Congress.

The current budgeting system makes a projection about what it will cost to fight wildfires in the next year. However, the number and intensity of wildfires—and the resulting costs to suppress them—have been higher than the projection almost every year since 1995, resulting in annual shortfalls. As a result, the Forest Service is routinely forced to raid other programs and transfer funds in order to fight current wildfires. This means even fewer dollars spent on programs such as wildfire prevention efforts, trail and road maintenance and infrastructure updates.

In 2015, the Forest Service reported that the transfer of funds to fight wildfires over the last 15 years had resulted in significant decreases across other programs: 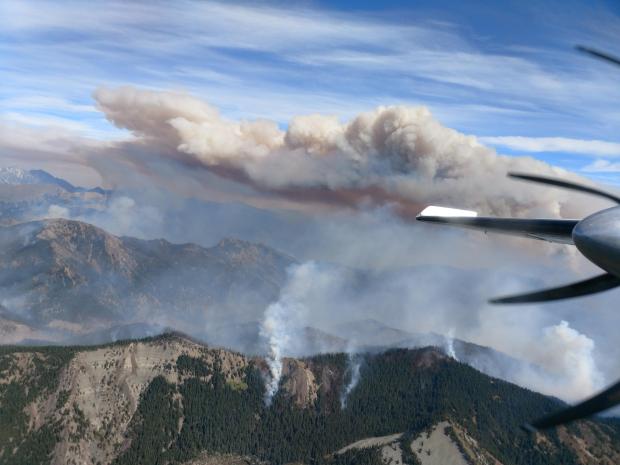 A view of smoke from the Jolly Creek Fire burning east of Snoqualmie Pass on Aug. 30. 2017. Photo/USFS via inciweb

Despite regular calls for a fix from the Forest Service and many other stakeholders, Congress has failed to pass legislation to treat wildfires like other natural disasters.

In 2015, a bill was introduced that would have provided a fix, but it moved slowly and failed to pass by the end of the year. Fortunately, in June of this year, a similar bill (Wildfire Disaster Funding Act) was introduced in the House.

In mid-September, a companion bill (Wildfire Disaster Funding Act of 2017) was introduced in the Senate by a number of sponsors, including Sen. Maria Cantwell. While the introduction of these bills is good news, more work is needed to pass the bills and get them signed into law.

Wildfire funding is not a new problem, but the impacts from failing to act are becoming greater each year. Among them is the continued decline of funding available to support activities to keep forests healthy, conduct regular trail maintenance and complete trail restoration work after a wildfire has swept through.

How to show your support for the fix

WTA appreciates all of Washington’s congressional members who have supported the effort to pass a fix. However, until a fix is signed into law, we're keeping up the pressure and making sure Washington’s elected officials continue to make it a priority. Throughout summer and fall, WTA has been talking with Washington’s lawmakers about the importance of wildfire funding.

And in early November, WTA’s advocacy director met with Washington's lawmakers in D.C. to discuss the wildfire bills, as well as other issues facing trails and public lands. It’s important that Washington’s lawmakers also hear from hikers like you across the state.

You can help by asking your representatives to pass a fix this year.

House Version of the Wildfire Disaster Funding Act of 2017

Senate Version of the Wildfire Disaster Funding Act of 2017

Aside from changing the surrounding views and draining trail maintenance budgets, fires have other long-lasting impacts on trails. After a wildfire has swept over a trail, it takes a lot of work to make it accessible again. In fact, the impact of a wildfire and the corresponding cost to repair trails can be so devastating that it exceeds the available money and resources. When this happens, the trail is often abandoned and is at risk of becoming a lost trail. 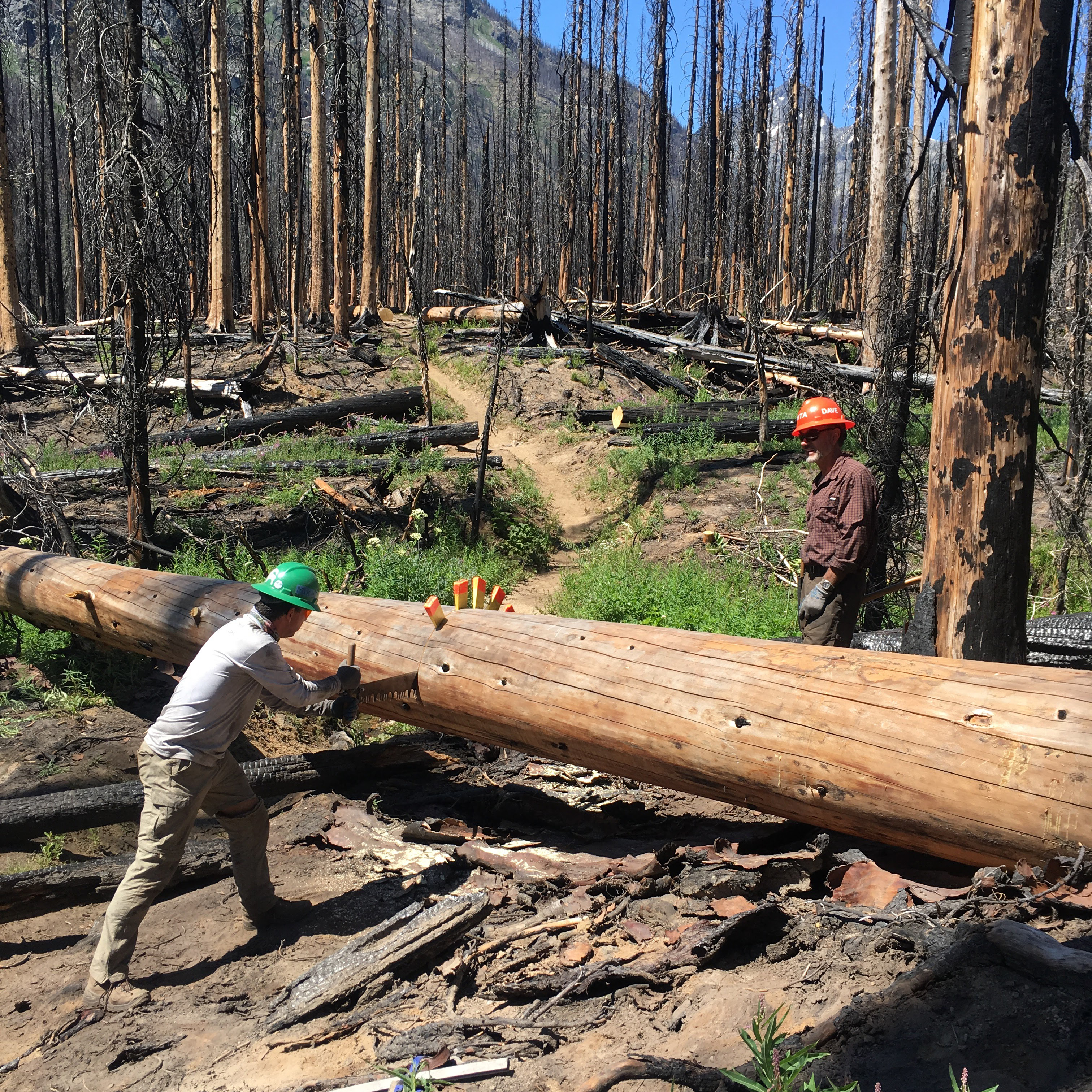 For years after a fire, such as the fire that burned near the Entiat River, trees need to be cleared from the trail. Photo by Marla Martin

One of the biggest challenges after a wildfire is burnt trees that have fallen across the trail. It takes a lot of time, people and money to log out fallen trees. And even after the first post-fire sweep of a trail to remove trees, dead trees can continue to fall for years. For example, the Andrews Creek Trail in the Pasayten Wilderness burned in 2003. More than a decade later, fire-scorched trees still need to be cleared from the trail each year.

Fires can also destroy wooden structures, including bridges, stairs, puncheons, turnpikes and log retaining walls. All of these have to be rebuilt, which requires a lot of trail maintenance hours and funding. A lack of usable wood in many fire areas further complicates the problem. Some bridges and other trail infrastructure never get replaced due to the lack of funding.

Wildfires impact soil and trail tread as well. When tree roots burn, they can later collapse and leave holes in trails. Erosion is also a challenge, for two major reasons. First, wildfires destroy vegetation, which holds the soil in place. Second, the heat from wildfires can make the soil repel water, further increasing runoff. On trails that have been hit by fires, crews need to re-establish tread every year, rather than every two to five years for trails that haven’t been impacted by fire.

This article originally appeared in the November+December 2017 issue of Washington Trails Magazine. Support trails as a member of WTA to get your one-year subscription to the magazine.

Please consider opposing this bill. I fully agree wildfire funding needs to happen, but there are negative consequences in this bill that I urge you to consider before you decide to support it. Thanks for keeping an open mind. https://blumenauerforms.house.gov/news/email/show.aspx?ID=S4IXPCPA7DP3S

Follow up comment. Thanks Andrea for helping me sort out that there are multiple bills related to wildfire funding, the ones WTA supports are different than the one the Oregon congressman linked earlier was concerned about.

Thanks for your email. The bill we are talking about is called the Wildfire Disaster Funding Act. It's a very different bill than the Resilient Federal Forests Act, even though it also talks about wildfires.

The Wildfire Disaster Funding Act would simply create a funding mechanism similar to other natural disasters, that enables to FS to pull from that funding pot, rather than their regular operating budget. The Resilient Federal Forests Act includes parameters around logging and the environmental review process that go far beyond wildfires.

Thanks again for your email.