Skip to content
Latina Youth Trail Crew Building Trails, Looking to the Future at Mount Rainier Nine young women recently spent a week improving Mount Rainier trails, contemplating equity in the outdoors and stoking a passion for adventure, with a little help from Latino Outdoors, WTA and many others. https://www.wta.org/news/signpost/pilot-latina-trail-crew-program-at-mount-rainier https://www.wta.org/news/signpost/pilot-latina-trail-crew-program-at-mount-rainier/@@download/image/image001.jpg

Nine young women recently spent a week improving Mount Rainier trails, contemplating equity in the outdoors and stoking a passion for adventure, with a little help from Latino Outdoors, WTA and many others. 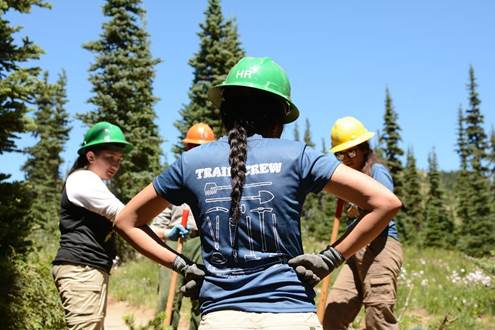 For those who know me, you’ll recognize the sentence above as my go-to catchphrase. It’s a Spanglish phrase best used to communicate awe in a natural setting. I frequently mutter it after reaching a ridge-top view after a steep climb. But right now, after having spent a week wandering in the woods with the Latina Trail Crew, “no pues wow” feels like an appropriate statement. 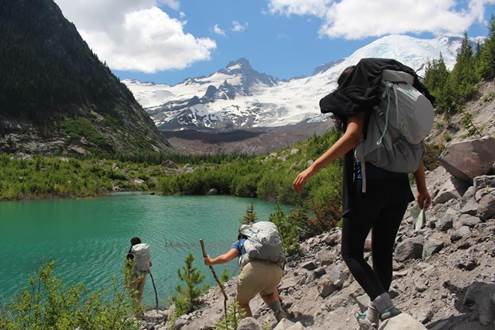 So what happened? The Latina Trail Crew was launched in conjunction with Washington Trails Association and Latino Outdoors. On July 23, nine young women (ranging in age from 13 to 16) embarked on an epic adventure at Mount Rainier.

We were stationed out of the White River campground and spent our days building trails, exploring rivers and contemplating the future of equity in the outdoors. Most of the participants hailed from the South Park neighborhood of Seattle and were alumni of the esteemed Duwamish Youth Corps. They had spent several months learning about environmental justice and community healing and were eager to take the lessons learned in South Park to the wild lands of Mount Rainier. 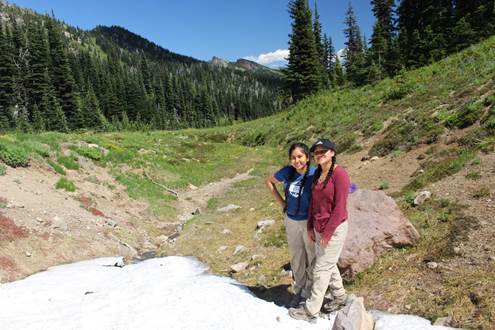 Several participants had never experienced snow in the mountains, so naturally we went looking for snow. Photo by Michelle Piñon

Over the course of four days of trail work and over 30 hours of volunteer maintenance, the nine girls learned about the parks natural history, careers in the park service, and their own place in world of public land conservation. We also learned, first-hand, just how ruthless the bugs can be in the sub-alpine. 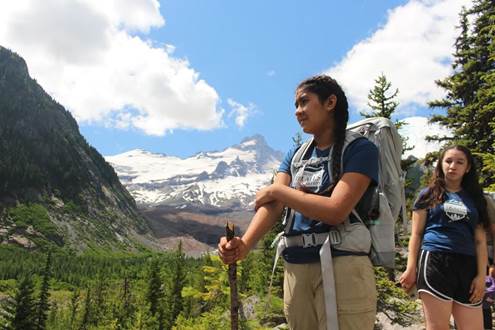 Gazing over majestic scenery or scratching a bug bite? Photo by Michelle Piñon

This work would not have been possible without the support of the Washington National Park Fund, who raised funds to provide scholarships for each participant. We are also greatly indebted to the folks at Mount Rainier National Park (including Ranger Orozco, Ranger Annie, and Ranger Montgomery) who welcomed the crew to the park and inspired several to consider careers in the Park Service. 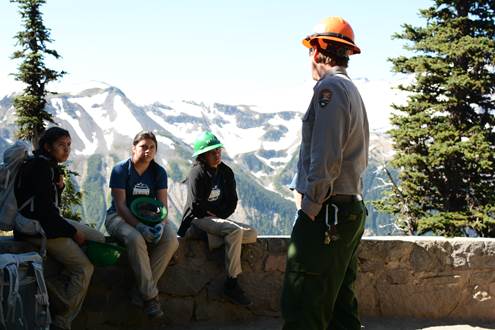 Ranger Montgomery talks about the importance of building an inclusive conservation legacy. Photo by Michelle Piñon

Thanks to the support of REI, Outdoor Research and MSR, the adventure doesn’t stop here. Each of the girls received numerous outdoor gear (ranging from stoves to backpacks to Goretex rain jackets) to encourage further exploration. It is our hope that WTA and Latino Outdoors have merely planted a seed, a passion for the outdoors, that will be further cultivated in years to come. 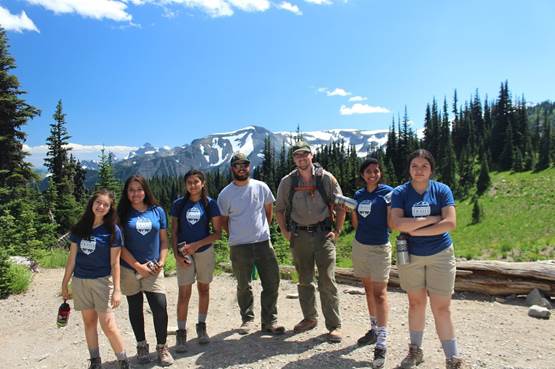 Girls pose with trail bosses, Boston and Alex, after a hard day of building check-steps. Photo by Michelle Piñon

This is SO amazing! Some of my students were from SP- this makes my heart happy
Please let me know if u ever need adult volunteers!!

This is really inspiring work. I am frankly so jealous, and wish I could do something like this in the future, either as a volunteer/career. As a latina I didn't realize hiking was something I could do or even like until I moved to the PNW. This is a really great program. I wish there had been something like this for me as a kid. Thank you for sharing this story and if you ever need volunteers, I'd love to get involved if that's a possibility.

Way to go girls! Thanks for your hard work!

Thanks for the support @DudleyQ, @Shortstack_09 and @Mare. If you would like to keep up with Latino Outdoors happenings - head over to Facebook and like the Latino Outdoors Washington Group Page. We share our public events there. :)

No pues, wow! Que orgullosa estoy de ustedes! Gracias muchachas por todo lo que hacen. I will be taking my retired parents to their first visit to Mt. Rainier in the next two weeks, and we will all appreciate your efforts then as well. I am interested in being an adult volunteer as well! -Edith Gomez

this is fantastic! Thanks for your hard work!

Love this so much.