Skip to content
Quotable: New Outdoor Heroes to Inspire You There’s value in a new view, a different perspective on a familiar landscape or even the same landscape seen in a new season. There's also great value in hearing from different voices in the outdoor community. https://www.wta.org/news/signpost/quotable-new-outdoor-heroes-to-inspire-you https://www.wta.org/news/signpost/quotable-new-outdoor-heroes-to-inspire-you/@@download/image/jose2.jpg

There’s value in a new view, a different perspective on a familiar landscape or even the same landscape seen in a new season. There's also great value in hearing from different voices in the outdoor community.

“The mountains are calling … ” The words of John Muir are ubiquitous in outdoor and mainstream conservation movements. And they’re powerful words; it’s no wonder they continue to resonate. But as we continue to grow as a culture, Muir’s unacceptable views of indigenous people tarnish the power of his words. It’s time to find new heroes.

There are many people in our movement who’ve done profound work for public lands and who work to ensure all people can enjoy those lands. When we go hiking, few of us pick the same place to hike day in and day out. There’s value in a new view, a different perspective on a familiar landscape or even the same landscape seen in a new season.

We wanted to hear from the voices of new heroes in the outdoor world. So we asked one of our youth ambassadors, Juli Hoza, to share a few heroes, past and present, who inspire her. Here are a few of the quotes from incredible people she admires. 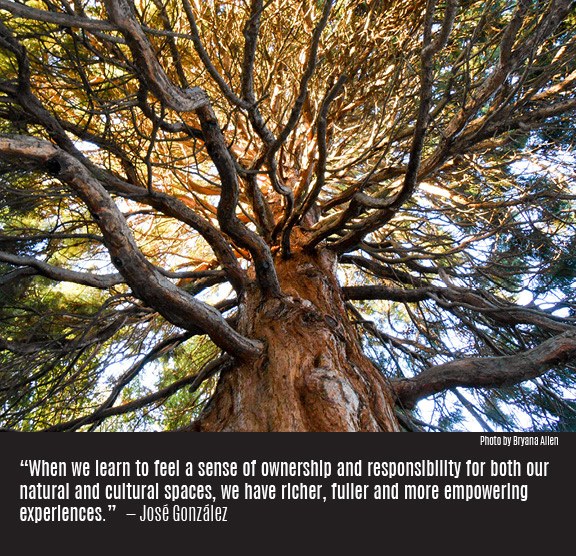 José González founded Latino Outdoors, a group devoted to connecting the Latino and hiking communities, but his passion for Latino culture and outdoors culture developed separately.

González’s love for nature grew as he visited national parks across the United States — the Redwoods, the Grand Tetons, Joshua Tree, the Grand Canyon — as well as other public lands. However, as he explored public lands, he noticed again and again the lack of other Latinos. In fact, he “felt like a bit of an anomaly,” he wrote in an article for Earth Island Journal.

In college, González was involved in both an environmental group and MEChA, a group relating to his Latino identity. He found that the two groups’ interests were often related and began to bring environmental justice issues into the conversation. It was during this time that he spent with these groups where he earned the nickname, “the Green Chicano,”

Around the same time, González was working as an assistant teacher for the California Mini-Corps Program, an organization established to help migrant children adapt to their new culture. The program also included an environmental education portion.

As he began to see the similarities between his own upbringing and the lives of his students, González, realized he was in a position to share his two passions. He could bring nature and Latinos together and that’s exactly what he did when he founded Latino Outdoors. 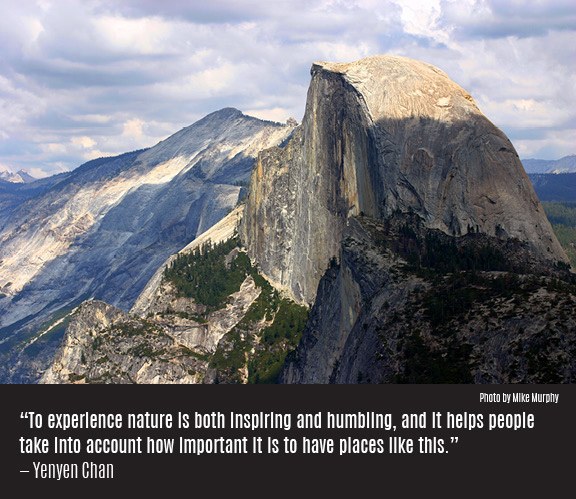 Yenyen Chan is a park ranger at Yosemite National Park. Her days consist of everything from leading hikes to giving talks on Yosemite’s history. Chan’s interest in the environment was nourished during her time in the Yale School of Forestry and Environmental Studies, where she graduated with a master’s in Environmental Policy and Resource Management. From there, an internship with the Natural Resources Defense Council lead her to Yosemite National Park and to her current job as a ranger.

In an interview with Yalescientific.org, Chan said “All of us in this field want to do this work because it’s something we love and because it’s critically important, both socially and environmentally.”

In the video, she describes how Chinese people were integral to the national park’s beginnings. Chan says that she “enjoyed bringing the unknown stories to light.” It is certainly clear that she’s proud of her ancestors’ contributions to Yosemite National Park. 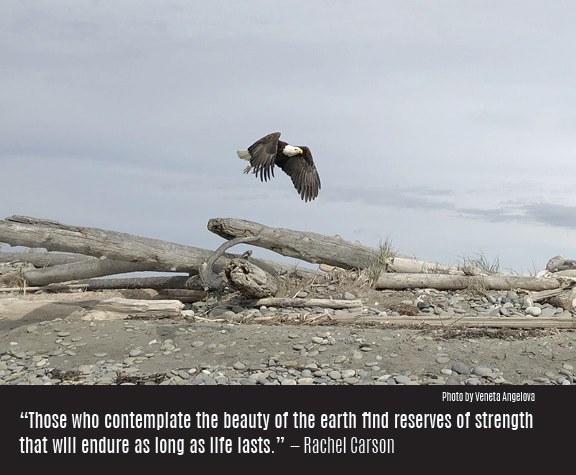 Rachel Carson is most famous for her book “Silent Spring,” in which she alerted the public to the catastrophic consequences certain pesticides, such as DDT, could have if misused. However, her pursuit of a career in ecology actually started with marine science.

Carson studied at the Woods Hole Marine Biological Laboratories and in 1932 received her MA in zoology from John Hopkins University. From there she went on to write for the U.S. Bureau of Fisheries. Eventually, she became the editor-in-chief for the U.S. Fish and Wildlife Service’s publications. Outside her work Rachel Carson also wrote several books. Her publications helped attract attention to the issues surrounding conservation, particularly regarding the ocean. “Silent Spring” made a significant impact when it came out, leading to the eventual ban of DDT and other harmful pesticides. 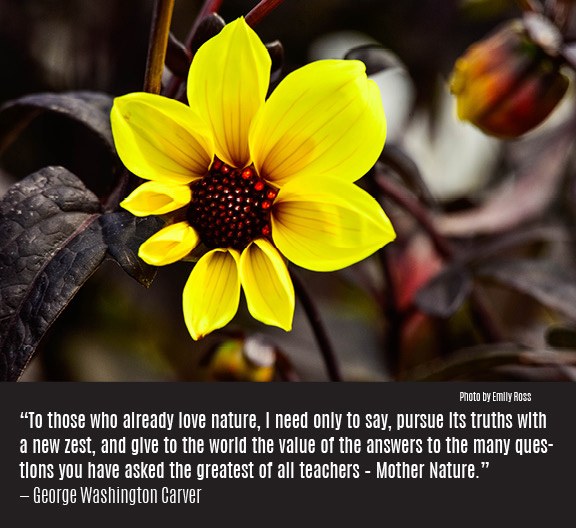 “A weed is a flower growing in the wrong place.”

George Washington Carver was born into slavery during the Civil War years. After the close of the war, he was homeschooled by his parents. After completing his education, Carver went on to become a prominent inventor most well-known for his work involving peanuts. He proposed using peanuts to restore nitrogen to the soil, which increased agricultural productivity. When there was a lack of demand for the new supply of peanuts, he came up with more than 100 products in which they could be used. These included dyes, plastics and gasoline. Thanks to his work, farmers were able to move to more productive and sustainable farming methods while increasing their agricultural success.

“You can't tear up everything just to get the dollar out of it without suffering as result,” he said. “It is a travesty to burn our woods and thereby burn up the fertilizer nature has provided for us. We must enrich our soil every year instead of merely depleting it.” 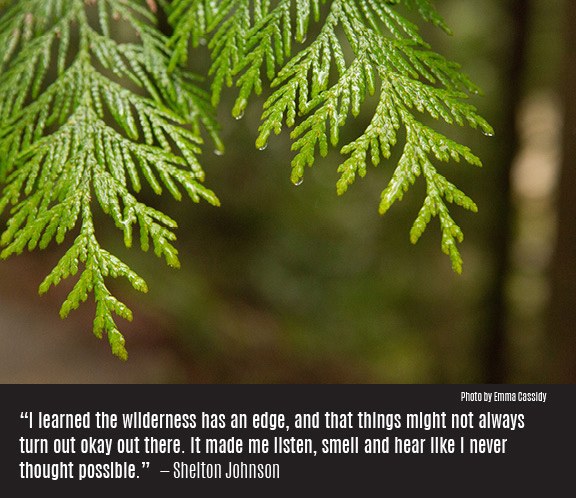 Shelton Johnson grew up with practically no connection to nature at all, but he wanted to go to the mountains that he’d seen in pictures and on TV. While at the University of Michigan, Johnson applied to work seasonally at Yellowstone National Park. It was at Yellowstone where he discovered his love for the wildlands of the United States.

Later, while working at Yosemite as an interpretive ranger, Johnson, came across information about the “Buffalo Soldiers.” The Buffalo Soldiers were a group of African American soldiers who built the first trail to the top of Mt. Whitney in Sequoia National Park while patrolling Yosemite in the late 1800s.

Inspired by this group, Johnson has done extensive research on the Buffalo Soldiers. He has given talks and written a book, “Gloryland: a Novel,” about their stories, in hopes of inspiring inner-city children of color to connect with nature the same way that he did.

“I can't not think of the other kids, just like me – in Detroit, Oakland, Watts, Anacostia – today. How do I get them here? How do I let them know about the buffalo soldier history, to let them know that we, too, have a place here?” Johnson said.

“It’s bigger than just African Americans not visiting national parks. It’s a disassociation from the natural world. I think it is, in part, a memory of the horrible things that were done to us in rural America.”

Bob on Quotable: New Outdoor Heroes to Inspire You

First, let me say how much I appreciate these quotes and the power they invoke. The outdoors is special in what it allows us to observe and how it makes us feel. Along those lines I have a quote to share from Skip Whitcomb that has inspired me ever since I first read it. "Outdoors is where the great mystery lies, so going into nature should be a searching and humbling experience, like going to church." I have always had a reverence for the outdoors, and Whitcomb's quote for me perfectly captures that feeling.

Second, I would like to say that I am disappointed that you would so easily dismiss Muir because of his culturally colored attitudes towards indigenous people. While his disparaging comments directed towards Native Americans are certainly painful to read and unacceptable, I believe we have to put them in the context of his times and his upbringing. I would like to believe that if Muir were alive today his attitudes towards Native Americans would be more inclusive in line with current culture. He admired them greatly for their closeness to nature and skill at being self reliant. But as Ross Wakefield notes in an article he wrote for The John Muir Newsletter in 1994, Muir couldn't overcome his Calvanistic upbringing and the attitudes that fostered. It's unfortunate that for all the good that Muir did in bringing attention to the value of wildness that we would focus on this aspect of his persona and allow it to tarnish that legacy.

akcreasia on Quotable: New Outdoor Heroes to Inspire You

Thank you for this piece, it's so important that people of color are recognized for their contribution in making public lands truly feel accessible for all. Reading Gonzalez's writing that, "only 22% of national park visitors identify as nonwhite", is just one example of how much more work we all must do in fostering inclusive spaces.

Jessi Loerch on Quotable: New Outdoor Heroes to Inspire You

Thank you for your comment, Bob, and for sharing a quote that inspires you.
As we were working on this piece, we were reminded that taking a new look at our old heroes can remind us that they are still people with flaws. John Muir said many beautiful and profound things about the value of wilderness and nature. But, like many people of his time, he also held prejudiced beliefs, and some of those came through in his writings. As we look back at old heroes and recognize them for both their strengths and flaws, it gives us some space to also look forward. And as we do that, we can find new voices who can inspire new generations of hikers.

Jessi Loerch on Quotable: New Outdoor Heroes to Inspire You

Thank you, akcreasia. And yes, there's a lot more work to do. It's something we're committed to at WTA. We believe everyone should have access to, and feel welcome on, Washington Trails.