Skip to content
Celebrating the Lives of Those We Lost in 2022 We take a moment to reflect on the lives of some of those who we've recently lost. They are missed, but we will remember and celebrate their lives and contributions to our community for years to come. https://www.wta.org/news/signpost/remembering-celebrating-the-lives-of-those-we-lost-2022 https://www.wta.org/news/signpost/remembering-celebrating-the-lives-of-those-we-lost-2022/@@download/image/mount fremont lookout sunset - gaby-laborde.jpg

Celebrating the Lives of Those We Lost in 2022

We take a moment to reflect on the lives of some of those who we've recently lost. They are missed, but we will remember and celebrate their lives and contributions to our community for years to come.

This year, we lost some friends in our community. They were explorers and adventurers. They were stewards of the land and volunteers in their communities. We wanted to take a moment to remember the incredible mark a few of them have made on all of us in the WTA community. So, we asked some of those closest to them to share a few memories about their vibrant lives, and the role that the outdoors played in the time they shared with us. They are deeply missed, but together, we remember and celebrate their lives and contributions to this community. 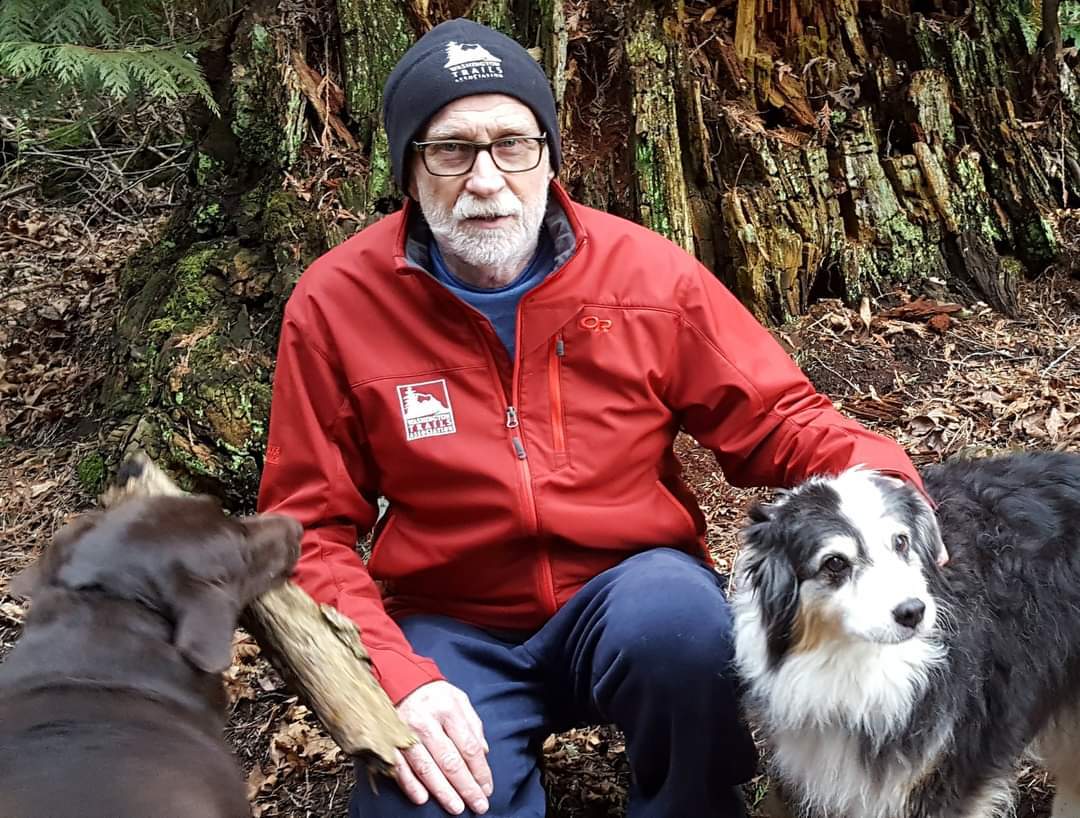 Terry opened up the natural world for me. His calm and respectful manner and love for the outdoors taught me so much and fills me with gratitude. Our life together was full of outdoor adventures, many on the beautiful trails of Washington. As a veteran backpacker Terry was tasked with teaching me everything I needed to know as a newcomer. I was an enthusiastic learner and he was a good teacher.

Here are just a few of my fond and funny memories:

Hiking the Hidden Lake Trail taught me one important lesson. Make sure your boots have enough toe room! Hiking the boulder field to the lookout was painful but fantastic and our camp overlooking the lake was so quiet I could hear the air on an eagle's wings as it flew over the lake. The hike out was less than optimal. Terry was quietly sympathetic. The boots came off before I got to the parking lot and went in the garbage. Next stop, Rei.

Backpacking the North Coast Route of the Olympic Peninsula turned out to be a week of over 70 degree beautiful calm weather. Our children of 5 and 6 years old were lured along with front packs of candy rewards and backpacks with a favorite stuffed animal. Terry gladly carried his 95 lb pack just to share this beautiful piece of the natural world with his family. He climbed those tall ladders up and over the bluffs once with his pack, once with mine, and once with each child without a single sigh of complaint. He didn't tell me about those ladders ahead of time. Smart man! 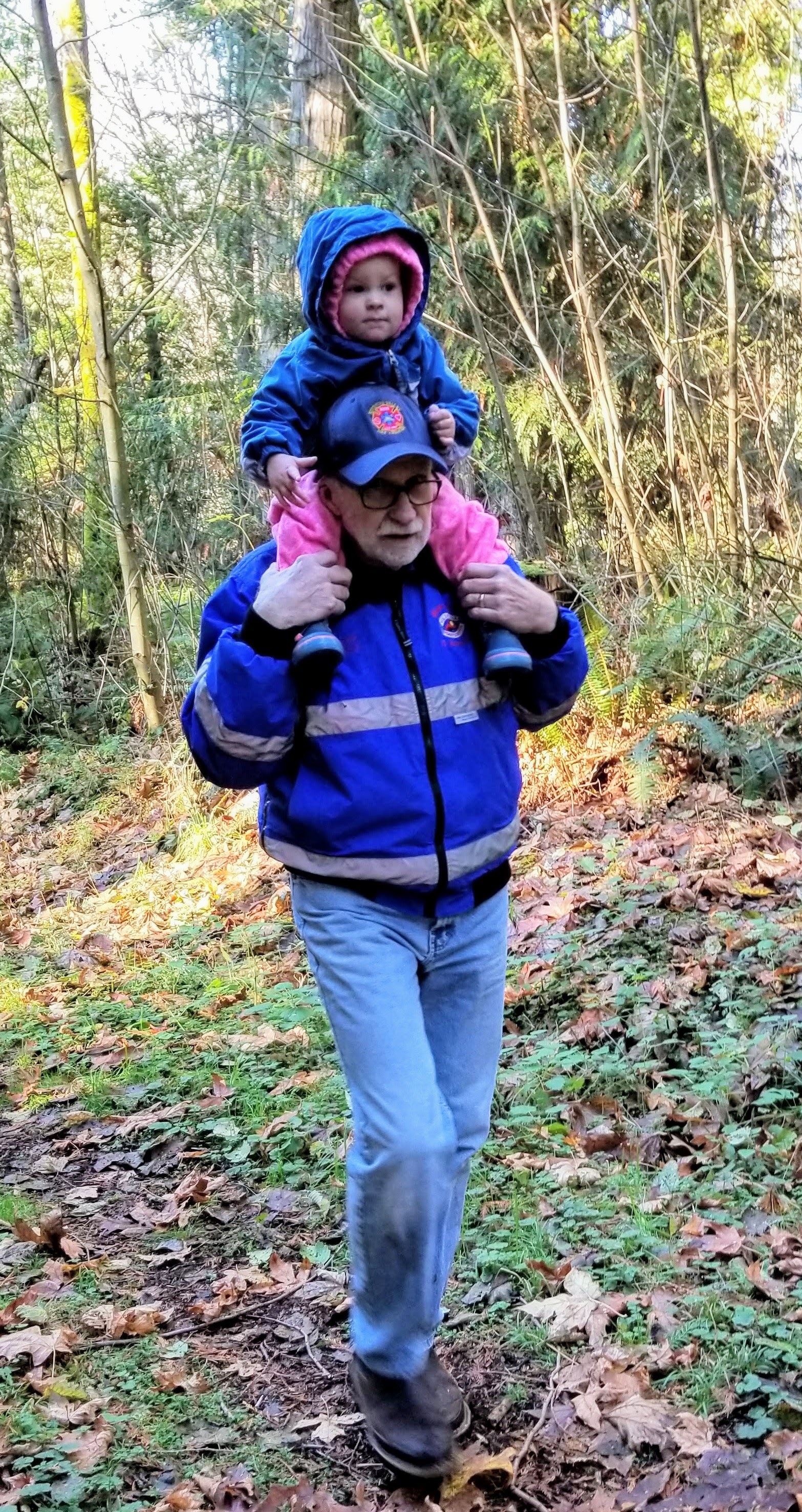 We hiked to Tomyhoi Lake that same year on a very hot day. We camped right there on the lake and it was beautiful. It was so warm that as each group of hikers reached the lake they started throwing off all their clothes and jumping in. My 6-year-old son just stood there staring. He said "Mommy, I can't quit looking!" I told him to try. He was not successful. Truthfully I wanted to jump in myself but Terry was far too dignified for that.

The Sahale Arm Trail to the Glacier was challenging, and Terry did not tell me we would be camping on rocks and the only potty was over "there" in plain view. The next day I watched Terry climb the Sahale Glacier as I took in the breathtaking beauty and an overwhelming feeling of being very small.

Terry worked hard at whatever he wanted to do and was determined to learn and succeed. And he did! He was an accomplished sailor. We spent many years in the San Juan Islands as a family on our own sailboat Eagle, out of LaConner. He raced sailboats in the South Puget Sound and raced the Swiftsure International Yacht Race for several years. He was a scuba diver and loved diving in the cold waters of the Puget Sound.

At 60 years old he learned to ride and train a rescued very large thoroughbred horse, named Roany. Our family spent the next years on our horses riding the trails of the North Cascades. Terry was fearless. He became a saddle maker and leather crafter.

WTA filled a beautiful space in Terry's later life. His love for the outdoors was enhanced by the beautiful people that became the Wednesday crew with WTA. My thanks to all of you who gave his life so much meaning as he grew older and wiser.

In closing, while thinking and writing about these small pieces of time that shine a light on Terry's life, I am truly honored and humbled to have been his wife and life partner for so many years.

Spending most of his time on trail work events with us at Mount Rainier National Park and around the greater Puget Sound region, Jim (nickname: "Old Goat") put in 276 days on trail since he began volunteering with us in 2007, often accompanied by his dear wife Carol. In addition to his time served as a WTA volunteer, Jim also volunteered at the park directly year round in a variety of ways. He was a strong steward for trails, loved being a part of our WTA community and will be sorely missed. You can learn more about Jim's legacy.

Did a hiker you love pass away this year? Please feel free to leave a memory in the comments below.