Thirteen miles, four days, eight volunteers and more trees across a trail than you could count. 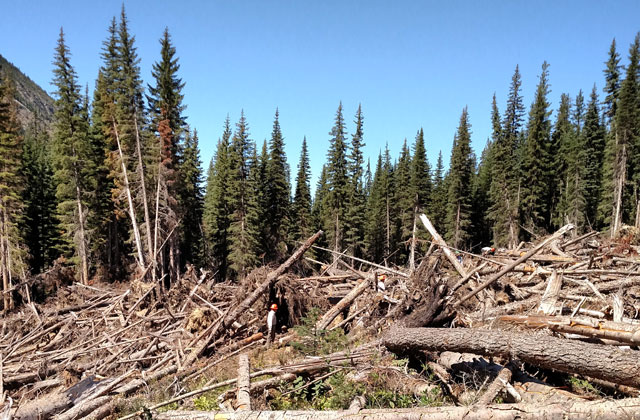 The crew eyes their work for the next few days. Photo by Zachary McBride.

Thirteen miles, four days, eight volunteers and more trees across a trail than you could count.

Last weekend, a team of indomitable volunteers along with crew leader Zachary McBride ventured onto the infrequently-visited Snowall Cradle Lake Trail to address an avalanche of mammoth proportions.

Just a few miles down the road from the famed Enchantments wilderness is a network of relatively unvisited trails that meander through breathtaking scenery. The only trouble: an avalanche had laid a blanket of trees across the trail last winter making the way nearly impassable, all but closing off a variety of loop hike options in this area.

WTA to the rescue

Out with the axes and Silkie saws! These nimble folding saws have become quite popular in WTA's trail maintenance program due to their lightness combined with their ability to handle larger logs than the Coronas we use for frontcountry work.

Using just four Silkies, an axe and some wedges, this incredible crew cleared a path through the avalanche debris, re-establishing a route through this remote part of a popular recreation area in Washington. Take a look at the photos from crew leader Zachary and crew member Jonathan Chadburn to get an idea of what they accomplished over just four days of work.

The craziest part? They didn't really need a bigger saw. At the end of the trip, there was just one 30 inch log left to cut and some brushing to attend to along the length of the trail.

Congratulations are in order for this crew. 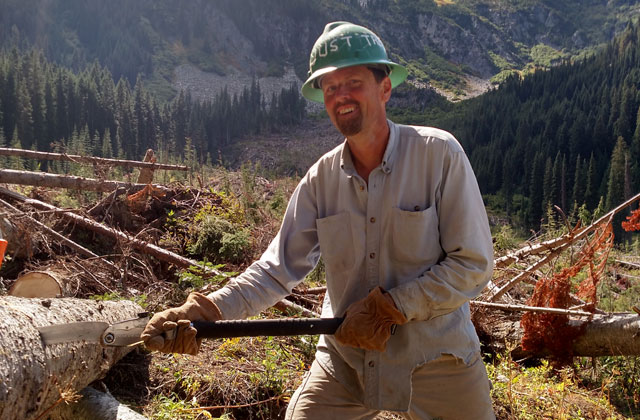 They got right to work clearing things out. Photo by Zachary McBride. 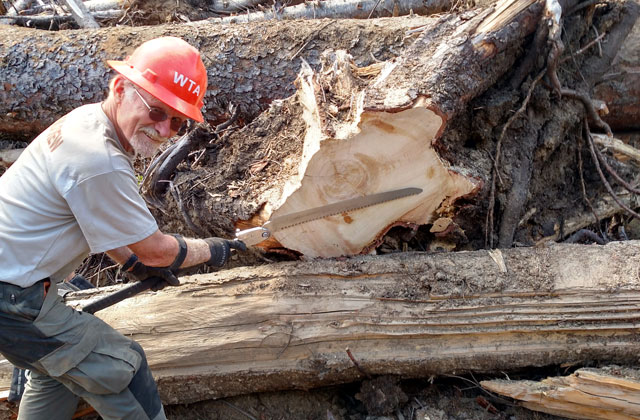 They cut some large logs... Photo by Zachary McBride. 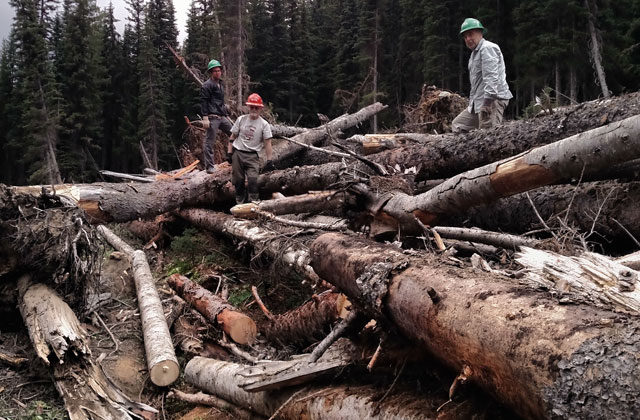 ...and some took a little more planning to clear safely. Photo by Zachary McBride. 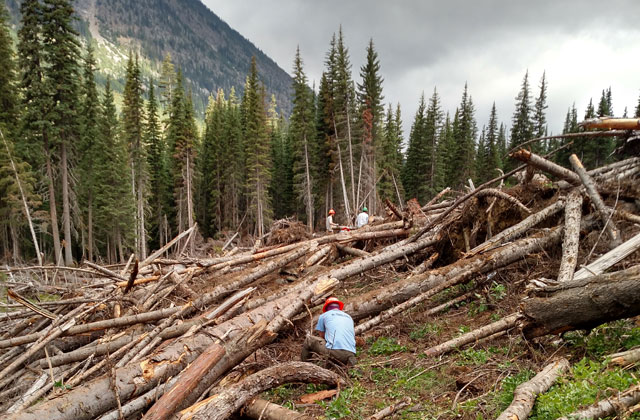 In spite of the astronomical number of trees, the crew persisted. Photo by Zachary McBride. 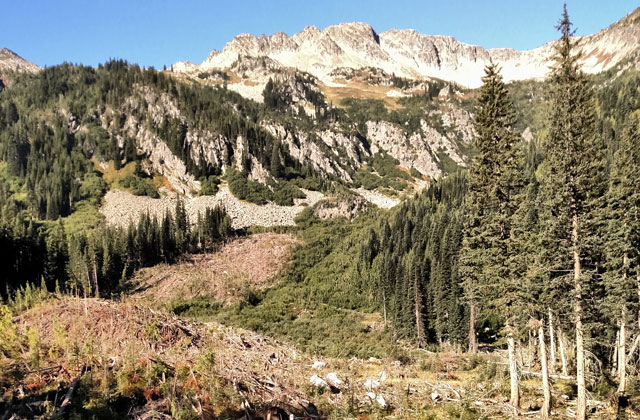 Luckily, it wasn't a bad place to be working! Photo by Zachary McBride. 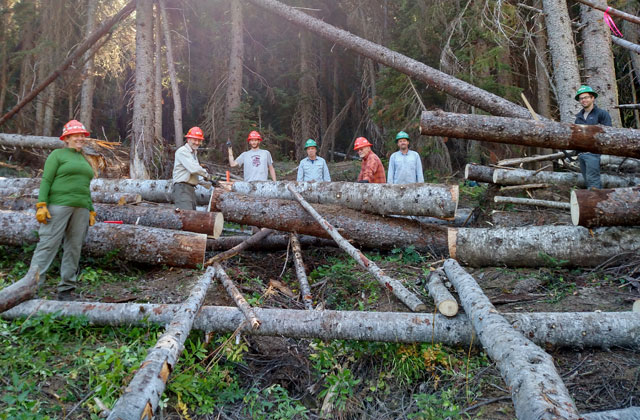 The crew poses with the system they used to skid logs off the trail as they were cut. Photo by Zachary McBride. 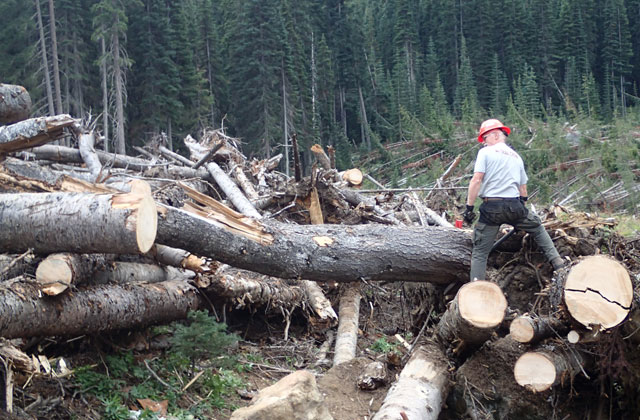 Some of the logs took a lot of work to evaluate and properly remove. Photo by Zachary McBride. 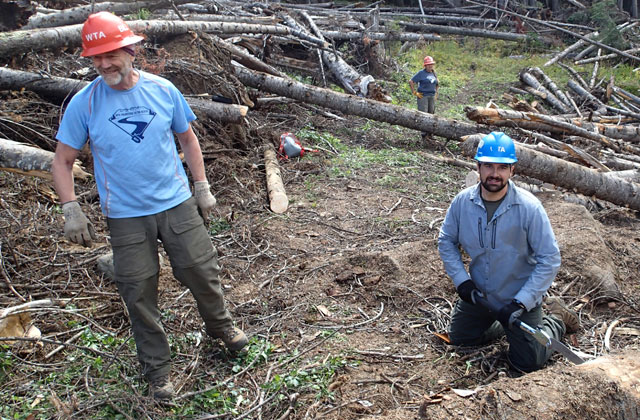 So it was important to take breaks and laugh a little. Photo by Jonathan Chadburn. 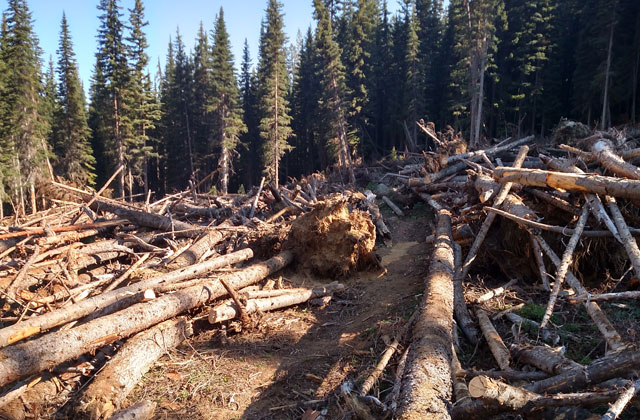 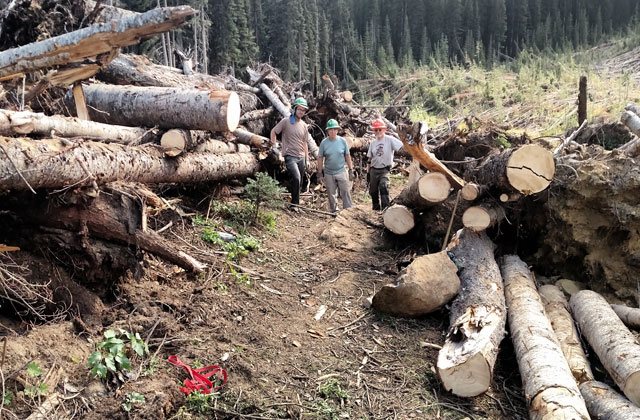 The trail is cleared and ready for hikers. Photo by Zachary McBride.

Hats off to all the volunteers, who put in so many hours making these trails usable...
Big kick in the but to Government/fill in the blank groups that have made it so we can't get in there with chainsaws so as to make this work a little easier...

Great work! Thanks a bunch.

In response to Midge's comments on using chainsaws.
You are right they would make the job easier but they are also the most dangerous tool invented by man and require a high level of skill to remove trees safely. Furthermore, imagine a WTA crew with chainsaws. IT would be too noisy to talk, those without certification would be limited to limbing and moving brush. With crosscut saws you can talk to each other, trade off the work, and newbies can quickly pick up new skills. I for one would rather see the jurisdictions do the chainsaw work while we focus on non-motorized trail improvement skills. In addition, much of our preferred work is in wilderness areas where motorized tools are restricted.

Chainsaws and this history of maimed/killed loggers...

Chainsaws decrease accidents. Crosscut saws are far more dangerous as it forces 2 people generally to be in the line of potential fire of moving logs when they release, or surrounding logs/trees release. The invention of the chainsaw saw a drastic drop in accidents in the logging industry. Reason? Logs move in one direction generally allowing the chainsaw operator to stand opposite the direction of swing. Far fewer pinnings, crushings, lost limbs etc. On top of this, it allows one to cut far quicker meaning you are less tired. Tired workers = dangerous workers. Most accidents happen at the end of the day when everyone is tired. Chainsaws were one of the best inventions in the history of mankind saving thousands of maimed people every year. Not allowing chainsaws on trail crew, is the dumbest thing the forest service does. Not only is it more dangerous, but also wastes many many many hours of volunteer work. Chain saws allow the volunteers to actually work on clearing the trail instead of sitting on their asses talking.

Darnit! I was going to sign up for this trip! A sawyers dream (instead of the two no-logs logouts I've been out on this year with another volunteer organization). Should have followed my gut. Great work folks!

As for chainsaws, I'm glad that they are not allowed in wilderness. And while it is true that generally chainsaws are less dangerous than crosscut because you are in close proximity to the log for a much shorter period of time, it is also true that we are not loggers felling trees. Crosscut can be safe and effective if you're doing your job right - sizing things up properly, assessing ALL your binds, and above all, listening to what the log has to say as you cut. I have no desire to work with a chainsaw, but I find crosscut work extremely rewarding.