Skip to content
The Changing Face of the National Forest Meet Yewah Lau, the district ranger for the Hood Canal Ranger District and 16-year veteran with the U.S. Forest Service. Be sure to join us in pledging to thank a ranger after reading. https://www.wta.org/news/signpost/the-changing-face-of-the-national-forest-1 https://www.wta.org/news/signpost/the-changing-face-of-the-national-forest-1/@@download/image/YewahLau2.jpg

The Changing Face of the National Forest

Meet Yewah Lau, the district ranger for the Hood Canal Ranger District and 16-year veteran with the U.S. Forest Service. Be sure to join us in pledging to thank a ranger after reading.

Much can be learned in five weeks. Yewah Lau, the district ranger for the Hood Canal Ranger District of the Olympic National Forest, found that out quickly during her first days on the job last summer. 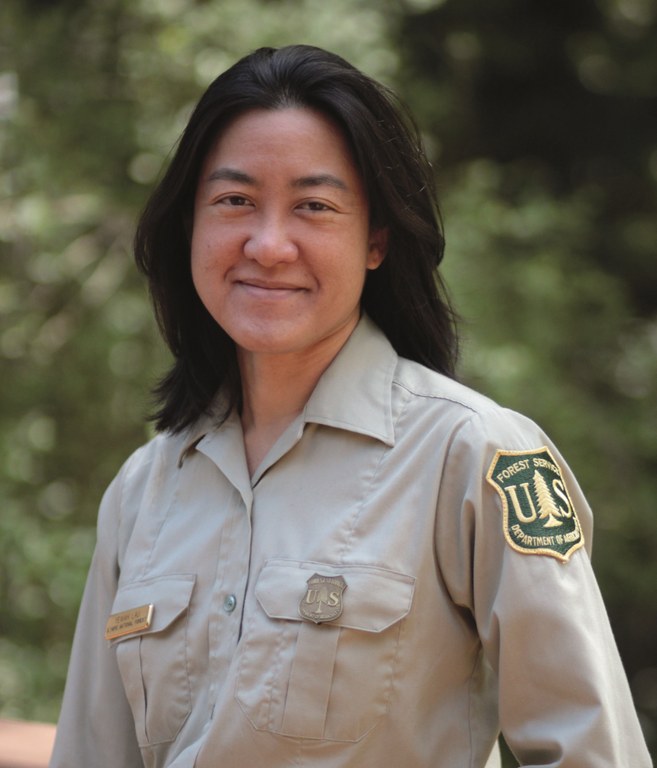 "These days, there is much more diversity in the forest service, especially gender-wise. I have met women who were the first: the first wildlife biologist in their forest or office, or the first firefighter. They were the trailblazers. They were changing the times and culture. I feel like I'm following in their footsteps."

As the local decision-maker for the happenings on the east side of the peninsula, from Sequim to past Hoodsport and along some of its south side, her role is all-encompassing: recreation, vegetation and wildlife management, working with local staff and specialists to help protect resources, and interacting with and creating opportunities for the public.

“Public lands offer opportunities not otherwise available,” she explains. “It’s the opportunity to make recreation available to all.”

Yewah’s work day can range from a video conference about road easement to an evening at a Quilcene school event to give children an idea of what it’s like to work for the U.S. Forest Service.

"I have met women who were the first: the first wildlife biologist in their forest or office, or the first firefighter ... I feel like I'm following in their footsteps."

Ultimately, though, Yewah’s work is driven by an overarching principle:  “Our obligation is to protect natural resources, wildlife and watersheds.  We have a mission that is unique and complex because we’re serving the American public and also trying to find the best combination of what all of those values are.”

Yewah’s journey to this point seems to build experience upon experience. She grew up in Houston, Texas. Her parents instilled a love of camping and road trips in her from an early age. She went on to study biology and environmental studies in college, focusing on policy surrounding the complexity of managing natural resources.

After graduating, she worked for a consulting firm, tracking federal environmental policy and learning the interplay between government and private industry. She soon decided that the mission of consulting and didn’t align with her personal values, so after completing a graduate degree in natural resource policy, she joined the Forest Service.

Yewah started at the D.C. headquarters, working with budget and congressional affairs, before deciding she wanted to get “on the ground” to understand what the Forest Service actually does. Her first field experience was in the Olympic National Forest as environmental coordinator. She found the work—and being able to see all sides of an issue or project—satisfying and valuable. Four years later, she moved on to serve as a forest planner in Arizona’s Cocino National Forest.  After six years, she headed to Oregon as a business and planning staff coordinator for Ochoco and Deschutes National Forests and Crooked River National Grasslands. A year later, she found herself missing the public interaction that came with her previous roles and decided to accept her current position, coming back to where her field work started.

Yewah is still learning the challenges of her new role, but finds there is an overall obstacle hanging over the Forest Service: how to serve the public and natural resources in the best way possible with limited means. Luckily, the Forest Service is well equipped with a “can-do” attitude and a penchant for creative solutions.

“We are always finding new ways of doing things so we can augment our capacity,” Yewah says.

This is one reason why partnerships with other organizations and volunteer power are invaluable.

Since being back in the Olympic National Forest, Yewah has mainly visited places with problems or issues, like the Dosewallips Road, which has washed out, and a campground closed due to tree root disease. But it’s been almost 10 years since her last time here, and she is looking forward to revisiting her favorite places for fun. She has fond memories of the area, including meeting her partner and going together on hikes and camping.

Yewah’s 15-year anniversary with the U.S. Forest Service was in July 2017. What made her stay?

“It gets back to earlier in my career. I left the consulting field because I was looking for some kind of alignment with my values,” Yewah said. “And I obviously found a home in managing public lands.”

This article originally appeared in the July+August 2017 issue of Washington Trails Magazine. It has been updated to reflect current dates. Support trails as a member of WTA to get your one-year subscription to the magazine.