Skip to content
The Great Spider Meadows Boot Return Just another great story of hikers in Washington being awesome to each other. https://www.wta.org/news/signpost/the-great-spider-meadows-boot-return https://www.wta.org/news/signpost/the-great-spider-meadows-boot-return/@@download/image/spider glacier by RedBeardRunningClub.jpeg

Just another great story of hikers in Washington being awesome to each other.

Hikers in Washington are awesome to each other — and the proof is in the trip reports.

Last summer, WTA member, mobile app volunteer and trip reporter Greg (RedBeardRunningClub) was on the second day of an overnight trip to Spider Glacier when he spotted a single boot perched on a log at the far end of the Meadows.

"It was just sitting there, very clean and obviously barely worn," he said, "I just felt like the owner would be so bummed out to have lost a brand-new boot! I think I first noticed it, honestly, because I'd been considering buying a pair of the same boots for some time, so I recognized it immediately (Salewa Crow GTX)."

Greg tied the boot on the back of his pack and hiked it five miles out. As he hiked, he hoped he would be able to return it.

"I'd seen similar happy endings before, browsing trip reports on WTA. I might have secretly hoped the boot belonged to Stuke Sowle (we came to Spider Meadows following his trip report of the previous week, and I've always wanted to meet him), but he seems like the type who does all his mountaineering in trail runners."

Greg posted his trip report about the highs of the trip (fantastic views overlooking both Spider Meadows and Phelps Basin!), the latest conditions (lots of downed trees and creek crossings, but only one deep enough to merit taking off the boots and wading) and the missing boot.

So how did a single boot end up that far in the backcountry?

"So, we set out midday Saturday to try and climb Seven Fingered Jack, camp in Leroy basin, and then go for Mt. Maude Sunday morning before hiking out," Kevin said. "I made the rookie mistake of bringing some new mountaineering boots that hadn't been broken in yet, so at the trailhead I decided to strap them to my pack and only put them on when I really needed them, using trail runners the rest of the way. I realized I had lost one after a friend made a comment during a snack break, half an hour after turning onto the Leroy Creek trail (about two hours into our trip). Thankfully stiff boots didn't end up being necessary as most of the snow on the upper slopes had melted, so it only affected our trip in that the group waited for me to backtrack in a futile attempt to find the missing boot." 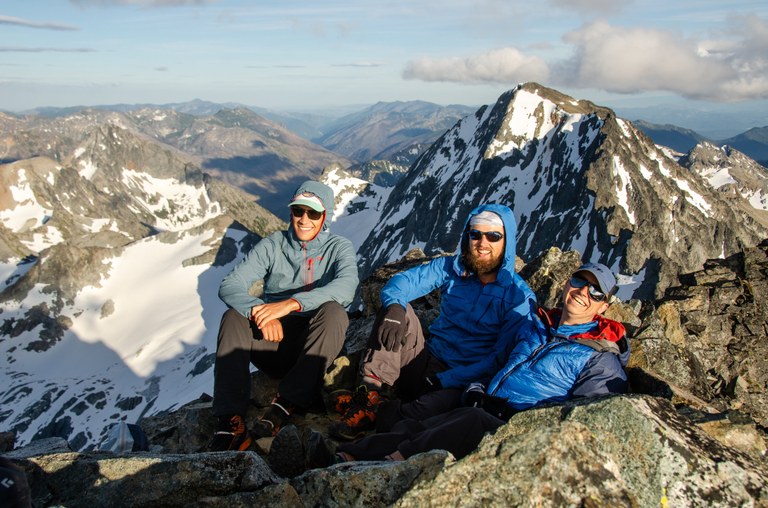 Kevin (right) and his buddies on the summit of Seven Fingered Jack.

Kevin jogged back a mile and a half before deciding it was hopeless and turning back.

"I was pretty pessimistic that it would turn up and figured it was at the bottom of Leroy Creek."

But his friends suggested checking online forums and WTA trip reports for Spider Meadows on the off chance that someone found it. Two days after Greg posted his trip report, Kevin posted a comment: "I think you found my boot!"

"I was surprised and thankful," said Kevin, "especially with how obvious it was from Greg's description that it was mine. I usually use trip reports to understand what to expect out there. Things like snow cover, gear requirements, camping options, etc. It's amazing how much detail some folks put into them and I've gotten a lot of value out of how active of a community WTA has. Generally people are very willing to assist others in ensuring they have an enjoyable experience in the backcountry, and clearly that extends to helping them find things they lost on the trail!"

Greg and Kevin exchanged email addresses, and coordinated the return over lunch in downtown Seattle, a few blocks from REI.

"I asked if Kevin recommended the boot, and he was a fan, but I still haven't pulled the trigger on a pair of my own," said Greg last week.

Kevin spent a busy season in the mountains with the reunited boots, starting the very next weekend in Glacier Peak Wilderness. "And I learned my lesson about strapping things to the outside of my pack," he said.

On the trip report a few days later, hsofia commented, "I love that the boot was returned."

In the rainy, dark days of winter, this little reminder of hikers being decent to each other lifted our spirits, as well as made us long for the days of wildflower meadows and summer overnight adventures to come.

The view of Phelps Basin from Spider Gap from RedBeardRunningClub.

We also wanted to give extra kudos to Greg for showing up for the hiking community in every way possible: donating money, volunteering time and putting in a little extra effort to haul a boot and report conditions back out to the community. You're why hiking in Washington is so damn special. Thanks, man.

Old but moving on The Great Spider Meadows Boot Return

It would be nice if everybody else was as considerate to others. Back in 1971 I backpacked to Enchantment Lakes, and heard of a camp being robbed of a sleeping bag and gas stove. That was worse than theft as it could have been FATAL to the victim!