Skip to content
The Story Behind Slime Mold It can move. It can multiply. It can survive assault from gardening tools. Sometimes it pulses like a slimy heart. You’d be forgiven for thinking it’s extraterrestrial. (In fact, in 1973 a blob of it was reported in Texas as an alien life form.) https://www.wta.org/news/signpost/the-story-behind-slime-mold https://www.wta.org/news/signpost/the-story-behind-slime-mold/@@download/image/3a-pic-within-pic-fulgio-septica-detail_kim-brown.jpg

The Story Behind Slime Mold

It can move. It can multiply. It can survive assault from gardening tools. Sometimes it pulses like a slimy heart. You’d be forgiven for thinking it’s extraterrestrial. (In fact, in 1973 a blob of it was reported in Texas as an alien life form.)

It can move. It can multiply. It can survive an assault from gardening tools. Sometimes it pulses like a slimy heart. You’d be forgiven for thinking it’s extraterrestrial. (In fact, in 1973 a blob of it was reported in Texas as an alien life form.) 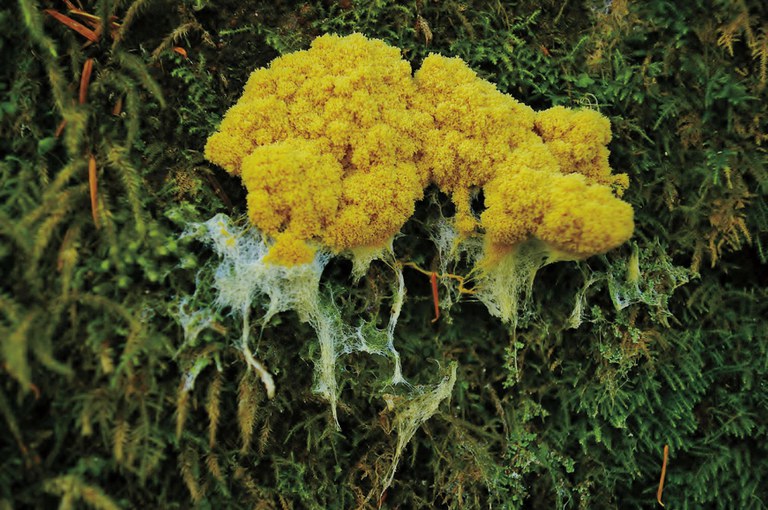 Up close with the mold. Photo by Kim Brown.

In truth, it’s slime mold and it’s one of the most mysterious and fascinating things you may encounter on trail. It’s in the kingdom protozoa, the least understood of the five kingdoms of life, so it’s worth slowing down to examine it. You’ve probably seen one, but you might not have known what it was.

Slime mold comes in many forms. The one that hikers might notice most is Fulgio septica, or the aptly-named dog vomit, a foamy-looking yellow/white slime. Others may appear as a white-grey blur, white globs, orange globes or bright orange tentacle-like tubes. Though visible with the naked eye in late summer and fall, a magnifying glass or loupe will better reveal the beauty of slime molds—the fruiting bodies of slimes come in a variety of shapes and colors. Once you see your first slime mold, you’ll notice them more often. 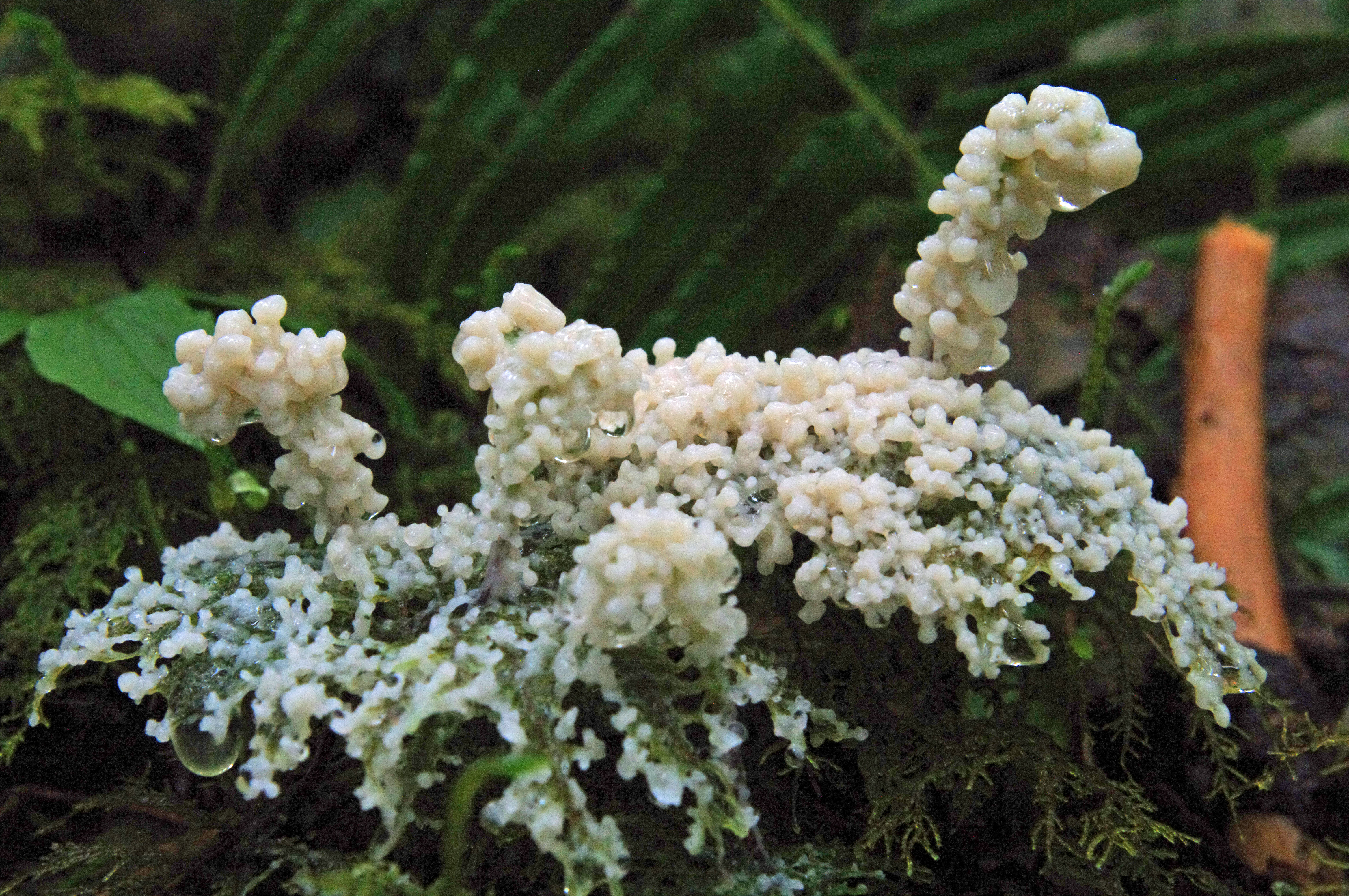 There are two kinds of slime molds: cellular, which cannot be seen with the naked eye, and plasmodium, which is a visible delight! A plasmodium is a mass of protoplasm, the complex soup within a cell that makes it tick. Plasmodium slime molds live as single-cell, amoeba-like organisms. However, lack of food puts multiple slime mold cells into action. Unlike most visible organisms, which are created by cellular division, slime mold cells merge, dissolving their individual cell walls to create one giant, multi-nucleated cell. Now it’s ready to move! It can pulse along at ripping speeds up to 4 centimeters per hour. The slime mold can steer itself away from toxins, and nudge toward food and nutrients. It can tear itself into separate pieces and then put itself together again. If I didn’t know better, I’d report one as an alien too! 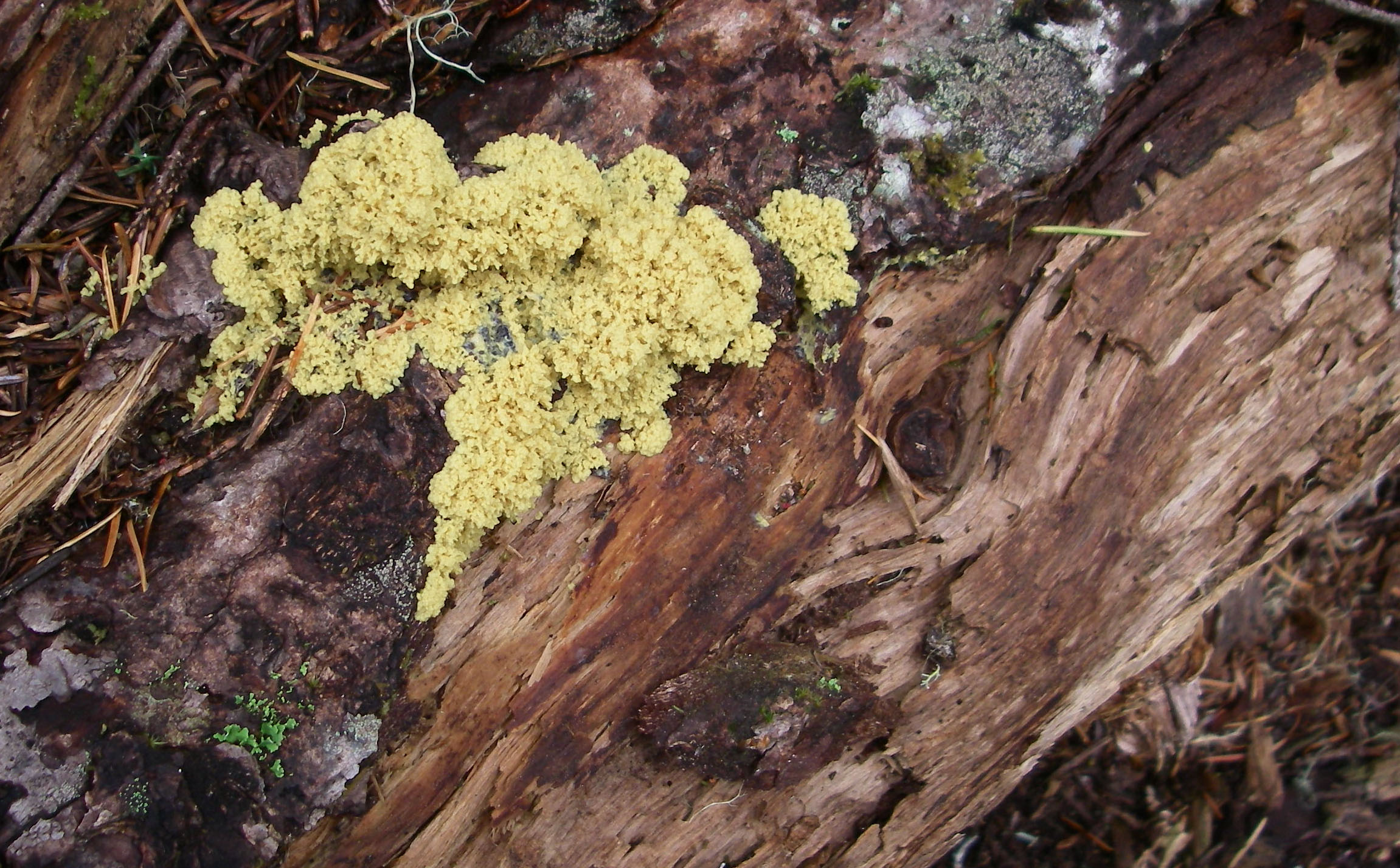 You’ll find slime molds draped over logs or hanging from bark, leaf litter or low plants on the forest floor. They are not picky; you’ll find them in drier areas as well as moist forest. Peek under the bark of a downed log and see if a slime is underneath. Look closely at a dog vomit slime to see the tracks left behind as it moves! (Pro-tip: If it’s weird and slimy and all your friends are accounted for, it’s probably a slime mold).

The prospect of seeing slime mold may slow your pace on the trail. To help you enjoy your slime mold journey, and get an idea of how cool slime molds are, see the book “Myxomycetes: A Handbook of Slime Molds” by Steven L. Stephenson and Henry Stempen. There is a Slime Mold Identification Appreciation Facebook page and lots of beautiful photos, videos and articles via a simple internet search. 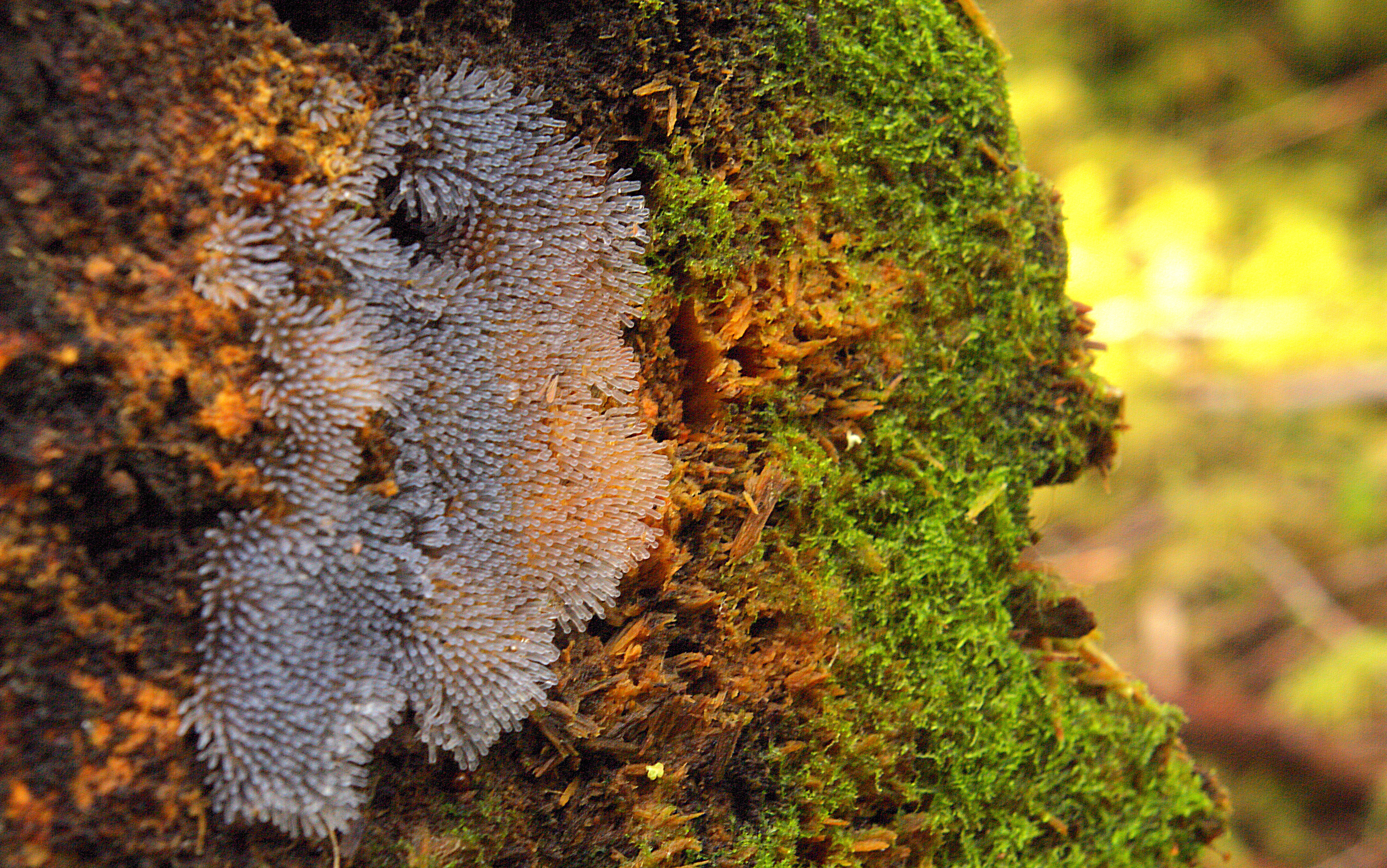 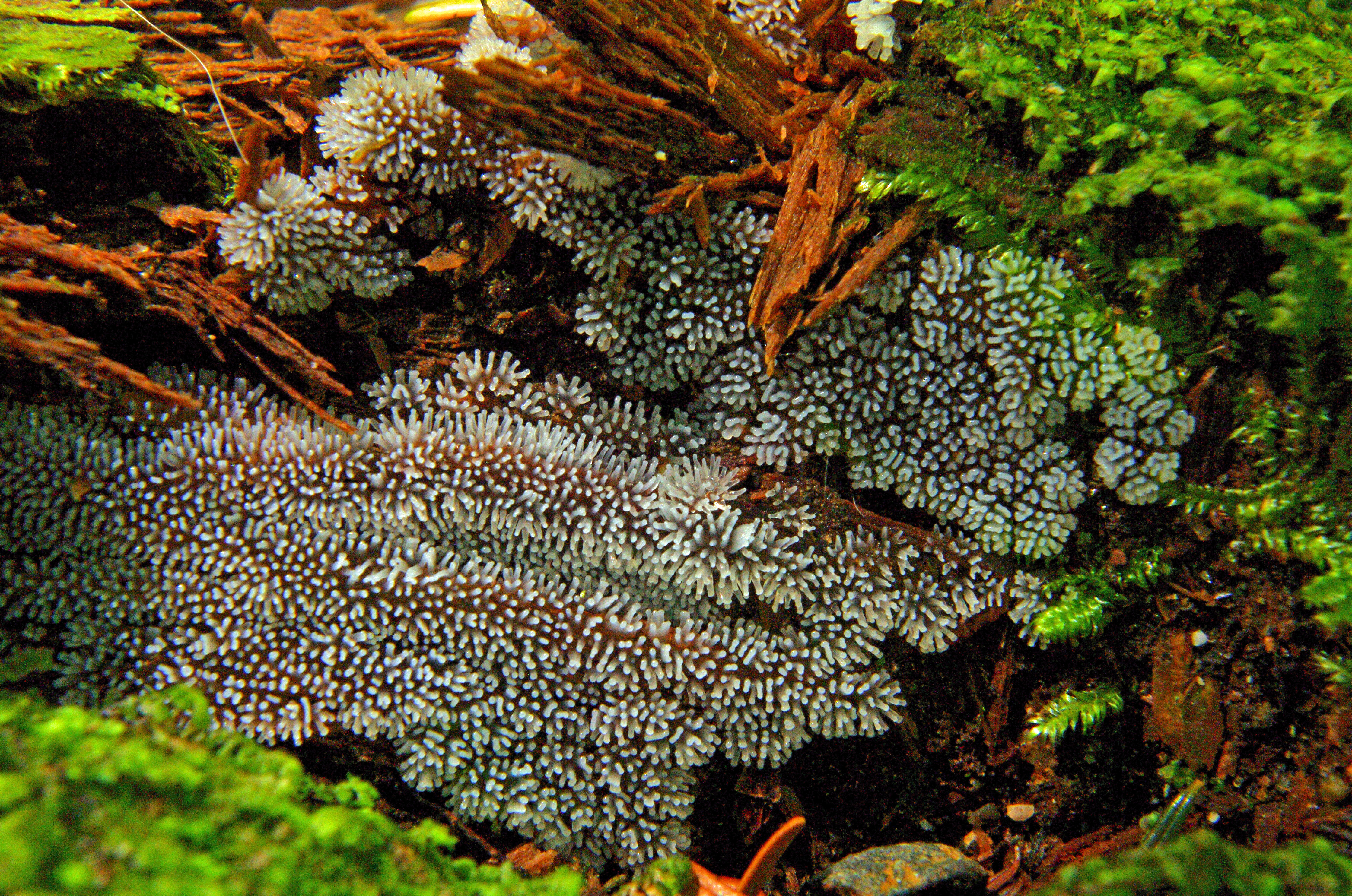 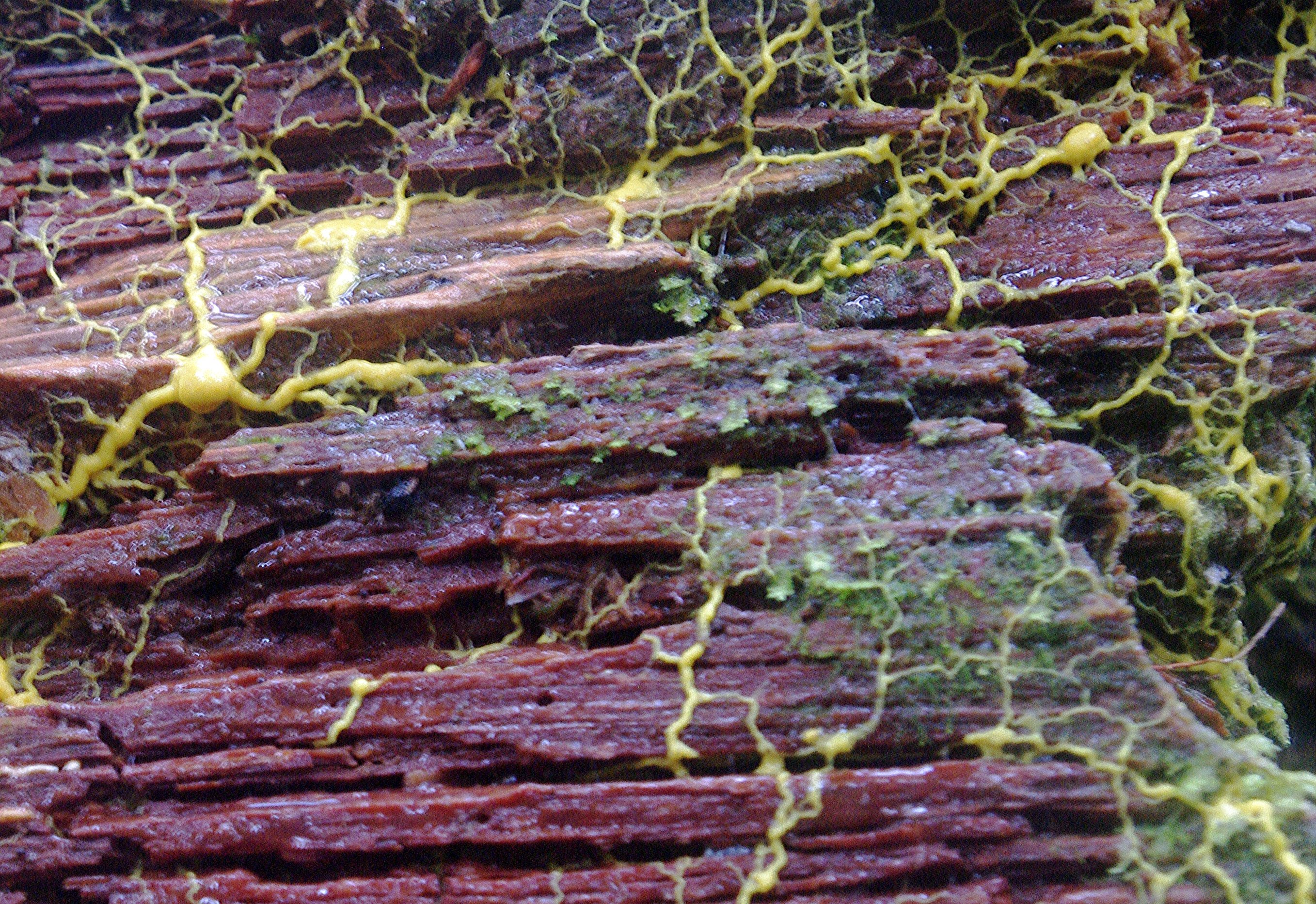 This article originally appeared in the July+Aug 2017 issue of Washington Trails Magazine. Support trails as a member of WTA to get your one-year subscription to the magazine.

irinamatache on The Story Behind Slime Mold

Darth Thaddeus on The Story Behind Slime Mold

irinamatache on The Story Behind Slime Mold

Thanks for sharing the article with a great importance !!

ehiker on The Story Behind Slime Mold

I too am an afficiando of slimes - fascinating things, not quite plant or animal or even fungus, that even science hasn't fully classified, nor fully understands yet.
I have a very nice photo (my own) collection started here- https://www.jungledragon.com/list/409/slime_molds.html Some tentatively identified, but most a mystery.

Janice Van Cleve on The Story Behind Slime Mold

Loved this article. Other hikers focus on the destination but I love to see the little details close at hand. This article not only sparked my intrest but gave me a good chuckle.

Nordique on The Story Behind Slime Mold

If you love slime mold photos, Flickr has a Slime Mold group, with over 4,500 lovely photos:

Muledeer on The Story Behind Slime Mold

Way cool pictures! I will be looking a little more closely for them now.