Skip to content
Highlights from Washington State Trails Conference The 2016 Trails Conference was abuzz with talk of transit and tech, as well as engaging the next generation. https://www.wta.org/news/signpost/three-highlights-from-the-washington-state-trails-conference https://www.wta.org/news/signpost/three-highlights-from-the-washington-state-trails-conference/@@download/image/highlight-Trail-Conference-panel.jpg

The 2016 Trails Conference was abuzz with talk of transit and tech, as well as engaging the next generation.

Rachel Wendling is WTA's Trails and Outreach Specialist, who we charged with attending as many sessions as she could fit in at the Washington State Trails Coalition. Here's her take on some of the hottest topics from the conference:

Last week, I was lucky enough to attend my first ever trails conference, held biennially by the Washington State Trails Coalition (WSTC). Held in Richland, the three-day conference was a chance for more than 200 leading trail professionals (including a number of WTA staff) from across the state to discuss their successes, failures, strategies, and passion for Washington’s trail network.

I left the weekend with a massive influx of behind-the-scenes trail knowledge, but narrowed it down to three major takeaways.

Hiking with your phone could help preserve trails

A lot of the trail community is thinking about big data, and how it may influence the future of trails in Washington state. It was a theme that speakers on many panels touched on during the conference. From economic reports to social media user to trail user statistics, good data clearly has a role to play in creating a sustainable future for trails.

In a session exploring responsible web and social media practices, WTA's Anna Roth and Loren Drummond were joined by Evergreen Mountain Bike Alliance's Bryan Rivard. From the role of trip reports and analytics to using social media channels to celebrate stewardship, the speakers explored how digital data and communities can be a positive force for trails.

Another interesting example came from Ryan Branciforte, CEO of Trailhead Labs, who has been looking at crowd-sourced data to help land management agencies better understand and steward their trails.

Branciforte talked about a unique partnership with the private company, Strava, an app which tracks users running and cycling activity via GPS. The app, currently boasting over 1 million active users, generates a heat map of activity that can be used to better understand who is on trail and how trails are being used. The data gives not only general statistics of trail user demographics (average age, gender, etc.), but also most common trail uses (running, biking), trail popularity, existence of hiker-made social trails, change in trail use, and more, which can be extrapolated in numerous ways. 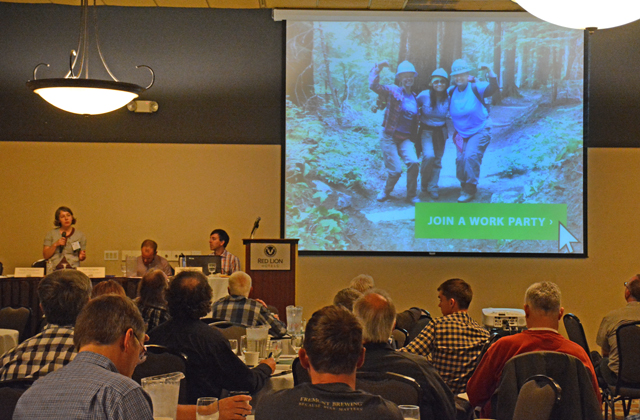 And how can that data be used? If it shows trail usage drop off significantly four miles into a six-mile trail, it may be indicative of an overgrown trail in need of clearing. If heavy bike use is seen on a hiking only trail, better signage may be needed. If hikers are consistently taking hiker-made social trails, land managers may need to take a second look at those trails and their hiker education efforts around the damage of going off-trail. There are many potential real-world applications that can come out of  thoughtful analysis of data from crowdsourcing apps such as Strava.

Though some other panels dug into some of the challenges that new apps and social media can present to trails, Branciforte and many of the other panelists were largely optimistic about the marriage of trails and technology. With better mapping platforms, creating affordable technologies, and by getting better data about how trails are being used, he feels like they can help bring land managers and park users closer together.

(Get WTA's free Trailblazer mobile app, which let's you file trip reports from your phone!)

Equity is a big deal, especially for youth programs

It's not news that the outdoor community has been grappling with its lack of equity and diversity, and that came through at the conference on several levels. There was a marked lack of diversity among attendees, despite the racial, socioeconomic, and age diversity of people using trails across the state.

But it was clear the trails community is looking to change that.

Like WTA, every organization and agency present was, in some way, actively trying to increase equity and accessibility, examining ways to break down barriers that have (and continue to) kept people from feeling a party of the trail community. Almost every presentation touched on equity in some way, and how organizations are incorporating an equity lens into their work.

And of course, there was a focus on the next generation as a part of that work.

Jeff Parker, executive director of Northwest Youth Corps (NYC) is working hard to remove barriers for youth wishing to get involved in the trail community. In a slightly different model than WTA's own Outdoor Leadership Training program, NYC aims to remove financial obstacles by offering paid service work to youth who otherwise couldn’t afford to get on trail.

It also provides meaningful training and education that can aid in careers down the road. Northwest Youth Corps actively communicates with under-represented communities to learn about and solve challenges which are preventing them from having a stronger voice in the trail community. Parker maintained that the outcome of joining a youth corps is not simply for the trails sake, but to engage our next generation, a generation of stewards from all backgrounds. 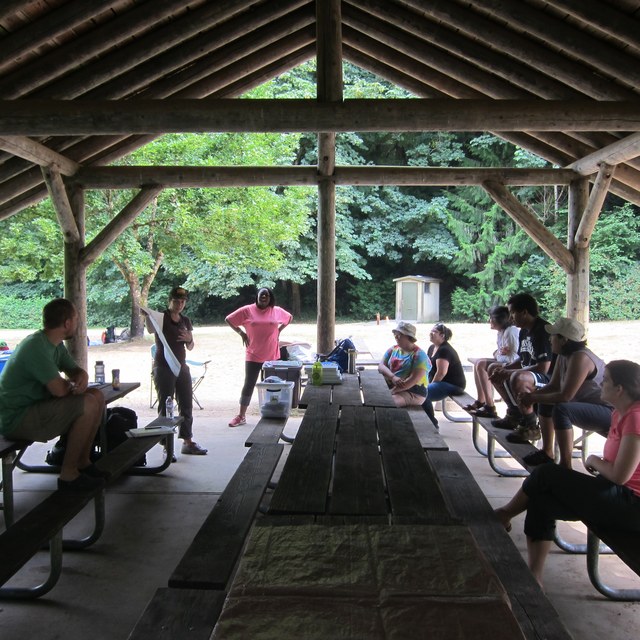 A WTA leader gives a lesson in navigation during an Outdoor Leadership Training workshop.

Transit to trails may be closer than you think

Physical access to Washington trails is one of the largest and most difficult problems to solve when it comes to getting people outside. In Seattle, more than 15 percent of households do not own a vehicle, which limits access to trails. Fortunately, land management agencies and nonprofits alike are beginning to grapple in earnest with eliminating this access disparity, and what it means for trail visitorship.

In a panel led by the state's Outdoor Recreation and Economic Development Policy Advisor, Jon Snyder, it was clear that creating a transit system that allows car free and urban residents access to Washington’s lands and connect to rural communities is a shared goal among many outdoor industry professionals.

Sarah Lange, Recreation Planner with the Mt. Baker-Snoqualmie National Forest talked about the role that transit can play in breaking down barriers to outdoor recreation access, especially along the I-90 corridor.

The manager of the Columbia River Gorge Project, Kristin Stallman shared success stories and challenges from her work on shuttle projects on both sides of the gorge, as well as how these accomplishments might be transferable to Washington as a whole.

While shuttles have been running to popular destinations like Dog Mountain and Beacon Rock State park for several years, the new Oregon-side Columbia Gorge Express had a successful pilot year. It took hikers straight from the densely populated streets of Portland to their choice of either Multnomah Falls (a popular tourism destination) or Rooster Rock State Park. Thousands of residents chose to ride the express this summer; 25 percent of them had no other form of transportation. The express has been approved for a second year, starting in May of 2017. The success of this urban shuttle program has served as a useful example for future shuttle programs out of Seattle. 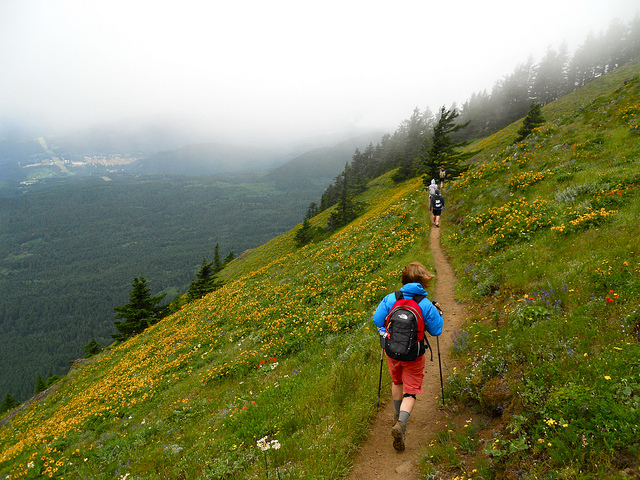 The panel also talked about the lessons learned from shuttle pilot projects near Seattle, projects that have grown out of partnerships between WTA, Mountains to Sound Greenway Trust, DNR and others. The conversation focused on both the potential (55 percent of Washington trail users surveyed stated they were willing to take alternate transportation to trailheads) and challenges (when a shuttle isn't convenient or requires a trip start from North Bend, the number of actual users dropped significantly).

The North Bend shuttle pilot won't be replicated in 2017, but the lessons will inform future transit to trails projects on the I-90 corridor. Until that dream is a reality, apps like TOTAGO (Turn off the App & Go Outside) can help you make do with the transit options already available, and local social groups can help you meet other hiking enthusiasts who may be open to carpooling.