Skip to content
Trail Champions in the House: Meet Five Leading Women in Washington's Legislature This fall, we hiked with five Washington state representatives on trails in their home districts. We recently walked and talked outdoor recreation, physical health and economic benefits with Representatives Entenman, Jinkins, Leavitt, Robinson and Ryu. https://www.wta.org/news/signpost/trail-champions-in-house-meet-five-leading-women-in-washingtons-legislature https://www.wta.org/news/signpost/trail-champions-in-house-meet-five-leading-women-in-washingtons-legislature/@@download/image/WTA spent September and October getting lawmakers (seen here with Rep. Cindy Ryu in the front center) out on trails in their districts and discussing what can be done to secure funding and increase access to the outdoors.jpg

This fall, we hiked with five Washington state representatives on trails in their home districts. We recently walked and talked outdoor recreation, physical health and economic benefits with Representatives Entenman, Jinkins, Leavitt, Robinson and Ryu.

Washington is a state of hikers. So it makes sense that our legislators don't mind taking a meeting outside.

This fall, we were fortunate enough to hike with five Washington state representatives on trails in their home districts. These five women are leaders on a multitude of issues for the state.

While on the trail with Reps. Entenman, Jinkins, Leavitt, Robinson and Ryu, we had the opportunity to discuss Washington’s incredible trail assets and the challenges that come along with keeping those assets maintained and available for users. WTA works in Olympia to bring the voices of hikers to the legislature and these legislators are key leaders in solving issues around access to trails, funding for outdoor recreation and supporting Washington's land management agencies.

Here’s a little bit more about these champions for trails in our legislature.

On trail: An avid hiker, Rep. Jinkins takes a holistic approach to the outdoor experience. Although she loves longer treks, like hiking sections of the PCT, she equally values getting outdoors close to home, like she did with WTA at Point Defiance Park in Tacoma in November.  She told us how being on trail provides her not only with exercise, but affords her solitude in her extremely busy daily life. For as long as she can remember, connecting with nature and hiking have been a vital part of her life. Her background is in public health and Rep. Jinkins understands the full impact of being outdoors on health, both physically and mentally.

In the legislature: Earlier this year, Rep. Jinkins made history after her peers selected her to be the next speaker of the House, the first woman and first open lesbian in state history to hold the esteemed position. Jinkins has championed several legislative proposals that were signed into law in recent years, including bills to reduce medical debt bankruptcies, expand access to life-saving drugs to chronically ill patients and a first-in-the-nation Long-Term Care Trust Act. She’s long been an advocate for LGBTQ rights and fought for legalizing same-sex marriage in Washington, which became law in 2012. She began her first term as a state representative in 2011, is the chair of the House Civil Rights & Judiciary Committee and sits on the House Appropriations and Health Care & Wellness Committees. 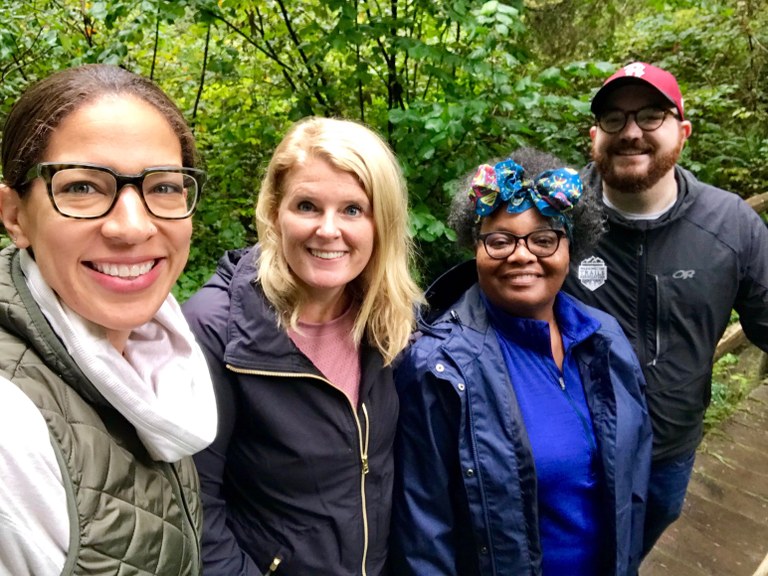 On trail: On a drizzly fall day, we hiked with Rep. Entenman on a trail through a wooded area of McGarvey Park, a King County park in Renton. Rep. Entenman, along with her family, have long enjoyed the region’s stellar outdoor assets through biking and hiking.

In the legislature: This year marks Rep. Entenman’s first term in the state house, and during that time she has already seen a slew of her sponsored bills become law. As a self-described “former non-traditional student who is passionate about education for people of all ages and stages of life,” she sponsored a bill allowing students who complete their associate degree under the Running Start program to receive a high school diploma regardless of age. Among her wins is a new law cracking down on sex traffickers.

On trail: It’s clear that Rep. Leavitt loves getting on trail (she happens to be an avid skier, too). She harnesses her energy and enthusiasm to engage with people and push for equitable approaches to policy, things WTA values in our policy-making decisions as well.

In the legislature: Rep. Leavitt also just wrapped up her first term in state office. She aims to make expeditious progress in the legislature. She sponsored several successful bills, including ones that increase National Guard compensation when called in to state service for wildland fire response and require more frequent reviews of violent incidents involving health care professionals. 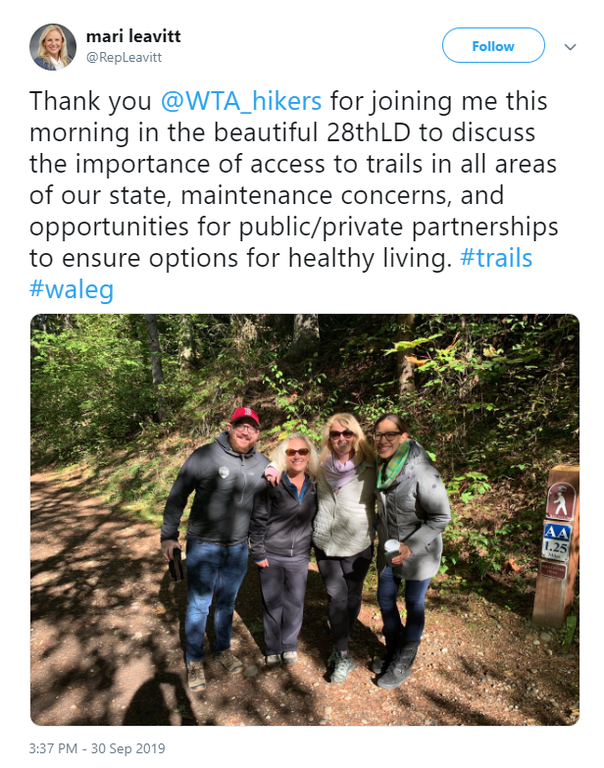 Rep. Mari Leavitt (second from left) shared her hike at Sequalitchew Creek Trail with WTA to her community.

On trail: While walking the Ebey Waterfront Trail, Rep. Robinson talked about how the space allows members of the community access to the outdoors, noting how this former industrial area is now a hub of connection and activity.

In the legislature: Rep. Robinson was first appointed to the state house in 2013. This year, she sponsored hallmark bills around transparency in prescription-drug price increases and investments in affordable housing. She is vice-chair of the Appropriations Committee, which considers the operating budget and bills that have a fiscal cost. 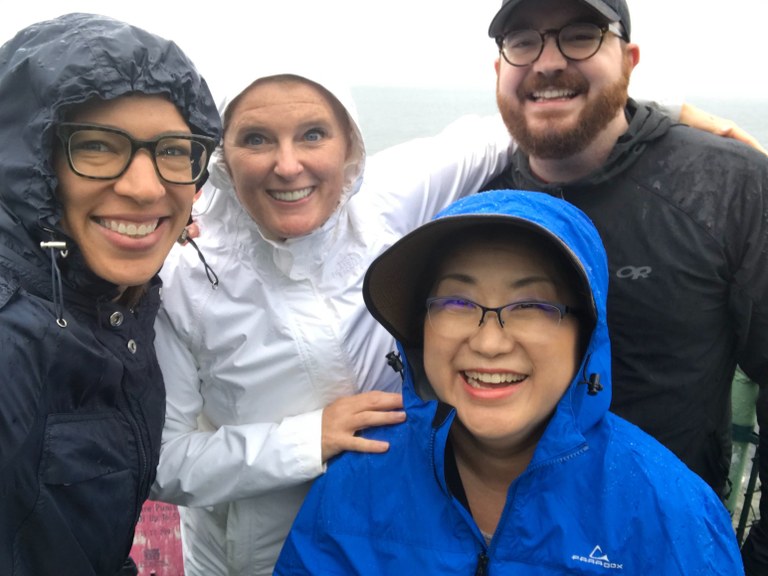 WTA spent September and October getting lawmakers (seen here with Rep. Cindy Ryu in the front center) out on trails in their districts and discussing what can be done to secure funding and increase access to the outdoors. Also pictured are Alex Alston (photo credit), Erin Dziedzic and James Moschella.

On trail: Rep. Ryu enjoyed that the trail we hiked in Carkeek Park was local and close to home. Accessibility to nature is something she clearly values. She appreciates that the park offered an abundance of other outdoor activities to her community — like beachcombing, a playground and barbeque space, and educational center — too.

In the legislature: Rep. Ryu has served in the House since 2011. This session, she sponsored successful legislation that increases housing flexibility for military service members, and a bill that preserves manufactured homes as an ongoing form of housing and fosters replacement of aging units with newer units in existing communities. Rep. Ryu is the chair of the Housing, Community Development & Veterans Committee, which includes, among other things, jurisdiction over state parks.

Stay in the loop

Want to stay up-to-date with these lawmakers’ work? Make sure you are signed up for the Trail Action Network. We will email you with updates and action alerts on the important issues impacting Washington’s trails, as well as report what’s happening in Olympia once the legislative session starts back up in January.