Skip to content
Victory! Hikers Celebrate New Additions to Alpine Lakes Wilderness Today, Congress passed The Alpine Lakes Wilderness bill, which will protect an additional 22,000 acres to one of hikers' most beloved destinations. WTA and hikers have been working towards this victory for seven years. https://www.wta.org/news/signpost/victory-hikers-celebrate-new-additions-to-alpine-lakes-wilderness https://www.wta.org/news/signpost/victory-hikers-celebrate-new-additions-to-alpine-lakes-wilderness/@@download/image/view-of-middle-fork-snoqualmie-from-pratt-connector-trail-explorerdogs.jpg

Today, Congress passed The Alpine Lakes Wilderness bill, which will protect an additional 22,000 acres to one of hikers' most beloved destinations. WTA and hikers have been working towards this victory for seven years.

The long wait is over! The Alpine Lakes Wilderness and Pratt and Middle Fork Snoqualmie Rivers Protection Act (H.R. 361 / S. 112) passed the Senate earlier today, marking the full passage of the bill by Congress.

A victory seven years in the making

Since 2007, WTA and hikers have supported the Alpine Lakes extension—which will protect 22,000 acres adjacent to the Alpine Lakes Wilderness (see map below)—along with many of our partners, including The Wilderness Society, Middle Fork Coalition, Washington Wild and Evergreen Mountain Bike Alliance.

The victory comes during the 50th anniversary year of the Wilderness Act and at the tail end of a week we've spent in Washington, D.C. advocating for trails and federal trail funding. During our visits to the offices of Sentators Murray and Cantwell and Representatives Reichert and DelBene all were were thrilled to have had such a strong hand in seeing the bill through to passage.

“For everyone in Washington state who cherishes our incredible wild spaces, this is a truly historic day,” said Senator Murray. “This isn’t simply about protecting the natural treasures we love, it’s about passing them along to our children, our grandchildren, and generations of Washingtonians to come.” 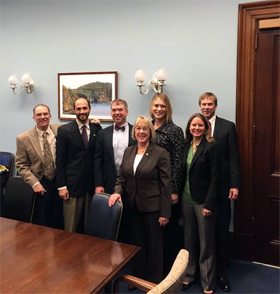 We were able to thank Senator Murray in person this week, when we met with her and partners to talk outdoor recreation.

Senator Patty Murray worked tirelessly to get it over the finish line in the Senate. The House had already voted and passed the bill, which was included in the National Defense Authorization Act, along with other land protection measures from Washington, including the Illabot Creek Wild and Scenic River Act.

Now the bill will head to President Obama’s desk, where it is anticipated that he will sign it into law.

Passage of the Alpine Lakes Wilderness additions bipartisan bill comes seven years after its first introduction by Senator Patty Murray and Congressman Dave Reichert. Both have been stalwart champions for protecting the low- and mid-elevation forests of the Pratt and Middle Fork Snoqualmie rivers valleys for future generations to hike, camp and snowshoe along the valley floors.

"I have worked tirelessly with my House and Senate colleagues as well as community members and local stakeholders -– all who share my vision of preserving and protecting Alpine Lakes," said Congressman Reichert when the bill passed the house. "The Alpine Lakes area is a perfect example of the natural beauty of our great state that also contributes to job creation and the success of local economies."

Senator Maria Cantwell and Congresswoman Suzan DelBene have also been strong supporters and cosponsors of the bill.

Join WTA in heartfelt thanks to our champions for their commitment to recreation in Washington: 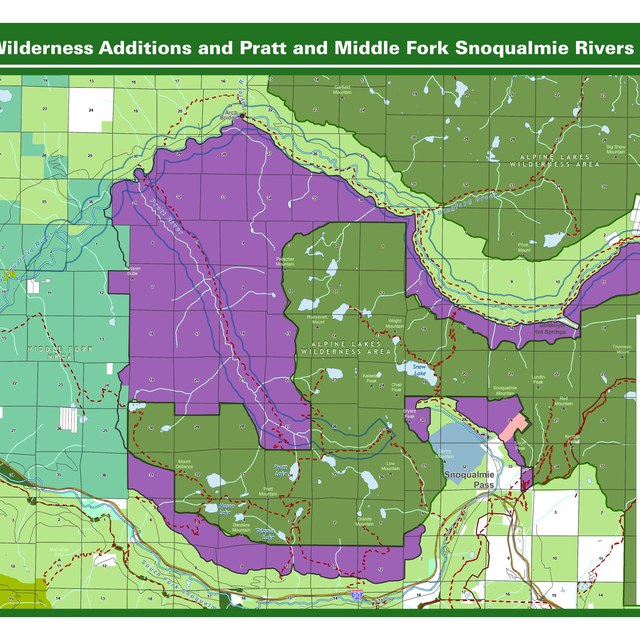 This map shows - in purple - the proposed additions to the Alpine Lakes Wilderness. Click for a larger version. Courtesy CORE GIS

What is a wilderness area?

These special areas have been granted the highest level of land protection in the United States. They can be in National Forest, National Park or on BLM lands. Washington's has 31 wilderness areas, and hiking is a wonderful way to explore them. Eighty percent of Washington's wilderness is within 100 miles of major metropolitan areas, making our state's wilderness some of the most accessible in the nation.

What is a wild and scenic river?

But a terrible map. Is there a more detailed version available?