Skip to content
Volunteer Spotlight: Dana Pounds WTA trail work volunteer Dana Pounds is the definition of can-do. A 20-year battle with a rare form of cancer hasn't dimmed her positivity and optimism, and losing her leg hasn't kept her off trail. She joined WTA on her first work party earlier this month. https://www.wta.org/news/signpost/volunteer-spotlight-dana-pounds https://www.wta.org/news/signpost/volunteer-spotlight-dana-pounds/@@download/image/toni-harms--2.jpg

WTA trail work volunteer Dana Pounds is the definition of can-do. A 20-year battle with a rare form of cancer hasn't dimmed her positivity and optimism, and losing her leg hasn't kept her off trail. She joined WTA on her first work party earlier this month.

Washington Trail Association volunteer Dana Pounds is the definition of can-do. She's tough and passionate. She effuses positivity, and is always ready to try new things. A marine biologist by trade, she lived in Florida for 20 years before moving to the Oregon Coast and then Port Angeles. 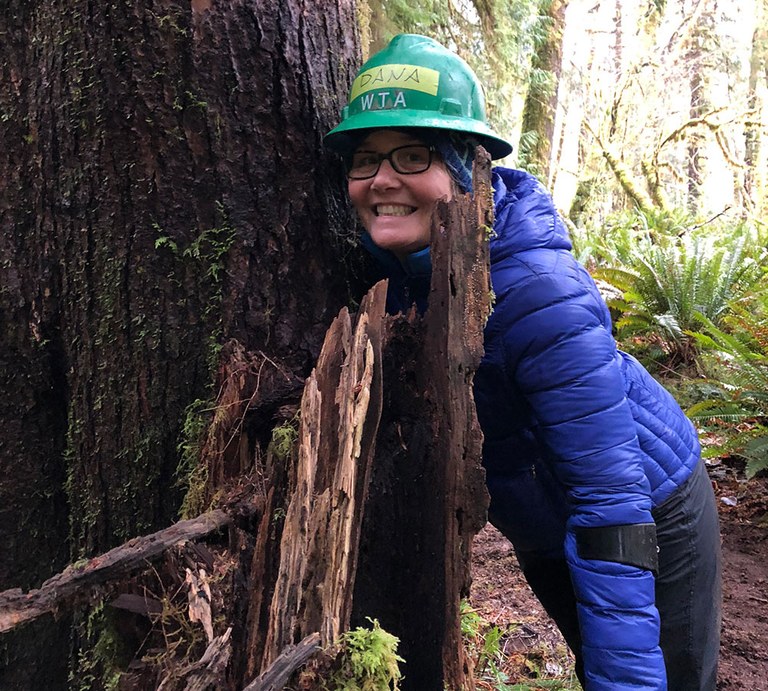 Happy to be on trail. Photo by Toni Harms.

Many of the new experiences Dana embraced have been related to her 20-year battle with a rare sarcoma called desmoid tumors (a type of cancer). She's run several 5K races to fund research for it and participated in clinical trials to treat it. When the treatments made it difficult to work in a traditional office setting, Dana tried something new — being her own boss. She started her own STEM-centric nonprofit in 2007. Then, in 2009, doctors determined they needed to amputate her right leg. After the surgery, she got a prosthetic limb.

But the tumor — which is still in her leg — pressed on her sciatic nerve when she used her prosthesis. She tried a few iterations of the limb, but the pain was bad enough that she eventually decided to trade the prosthesis for a wheelchair.

"When you have surgery like I did, there's a lot of pressure to have a prosthesis because there's a push to get back to how you were before. But it just wasn't working for me, and I thought 'You're not even the same person from one second to the next — why would I keep trying to 'be whole' by using this prosthesis that isn't working for me?' So I tried something new."

Dana still went on short walks using aluminum crutches, but it was uncomfortable to use them for long periods of time. So she embraced life in a wheelchair, even using it to participate in yet another race to fund research for desmoid tumors.

So many years of cancer treatment took a toll on her body, so she's recently shifted her focus from getting rid of the cancer to improving her quality of life. A few months after moving to Washington, Dana and her friend Toni went to Deer Park for a walk among wildflowers. That day, Toni suggested looking into crutches more suited for long-term use. After some research, they settled on SideStix; crutches that attach to Dana's forearms. They're more comfortable, and they feature hiking tips that provide more traction and grip on slippery surfaces, allowing Dana to get out in more places than she can with her chair.

Now, Dana shares her hiking adventures with the facebook group Olympic Peninsula Hikers. That's how she met WTA crew leader Rebecca (Becca) Wanagel, also a cancer survivor. They decided to meet up in person, agreeing on a hike at Heart O'the Forest in Olympic National Park. That day, Becca convinced her to try yet another new experience: a WTA work party. 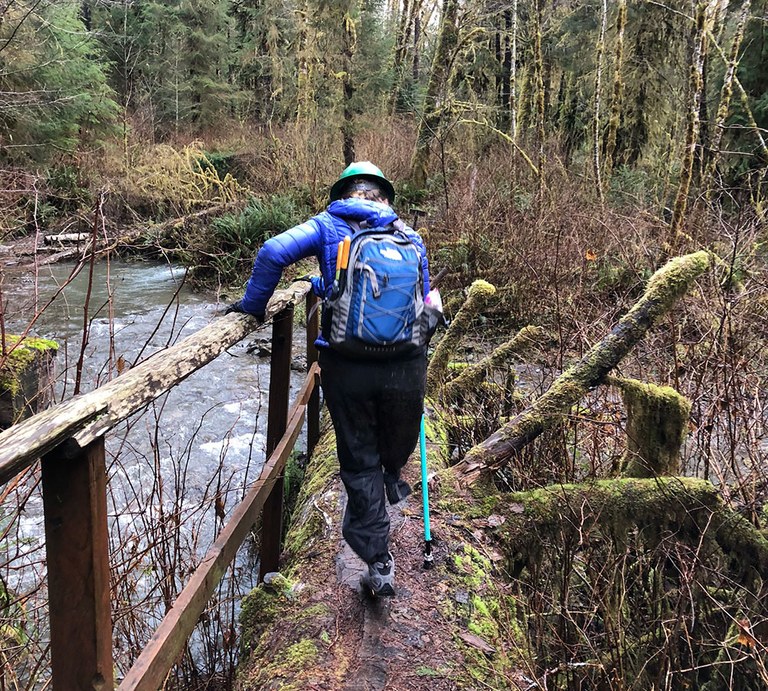 Heading into the worksite. Photo by Toni Harms.

So Dana and Toni joined a big crew of volunteers at the trailhead for the Bogachiel River trail earlier this year, where WTA is working on rerouting 0.6-mile of the trail. During the morning's orientation talk, Dana told the crew how thrilled she was to be there.

"Six months ago I didn't think I'd be hiking, but thanks to my friend Toni helping me get these crutches and Becca inviting me out, here I am! I'm so grateful for all of you welcoming me."

We all worked hard during the day. brushing the corridor of what had already been built and roughing in the new reroute. I worked next to her for part of the day, so I got to experience her positive outlook and funny personality firsthand. At one point, she explained how she'd selected her specialty in marine biology: snails.

"When you're working from a position like mine, you have to level the playing field — they can't get away from me."

She said this as she sawed away at a log that constricted the trail for pack animals. It was a fairly large log, and took some patience to get through. But when she did, she threw up her hands with joy. Then she, Toni and Janice O'Connor took a walk to see how the rest of the project was coming along. 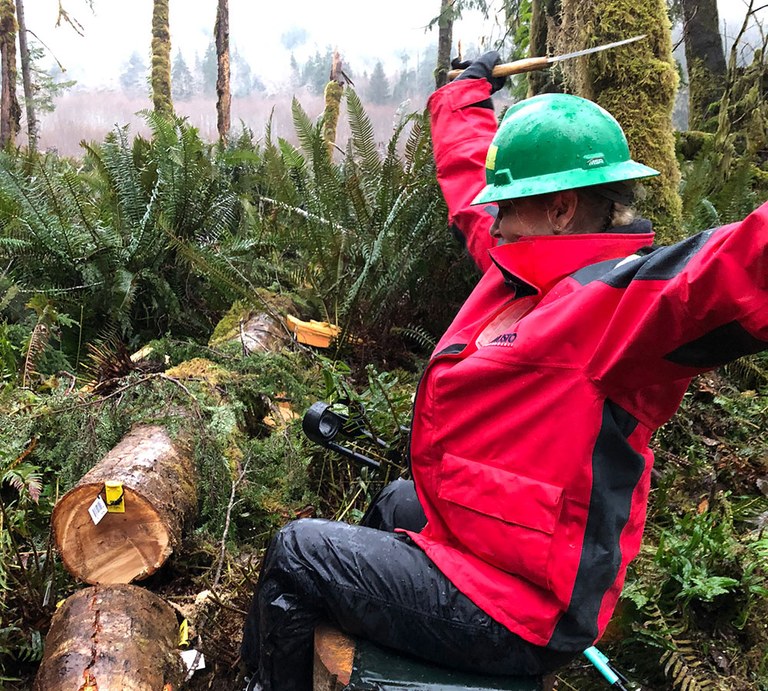 A successfully-removed trail obstruction and a very happy volunteer. Photo by Toni Harms.

The weekend had one more new experience in store for Dana (and almost every other volunteer there that day) — dinner and appetizers served in a cozy, woodstove-heated wall tent courtesy of the Mount Olympus chapter of Back Country Horsemen of Washington. Later, I asked Dana what she thought of the day.

"I'm flooded with gratitude! I know technically I was a volunteer, but I feel like I received so much more than I gave. A few months ago I could not have imagined hiking ... and here I am volunteering to assist with trail maintenance. I received an education about trails, safety, tools and forest ecology. But I think my favorite part — the encouragement and camaraderie I experienced with the work crew. This has truly empowered me to take the next steps along my cancer journey with hope and joy."

If you want to follow her adventures, follow Dana on instagram or on her blog. Or, you can meet her and WTA's other fantastic volunteers by joining a work party.