Meet Maridee—recently retired and heading to Bangkok to pursue her Master's degree, she wanted to spend a little time volunteering with WTA before heading out.

Last year, 4,700 people volunteered on trails all over the state of Washington. While there's impressive strength in numbers (like donating $3.9 million of labor on 240 trails in 2016) WTA also likes to highlight some of the individuals who make that possible. Maridee BonaDea is recently retired, and ready for life's new adventures, including learning as much as she can about trail work before heading to Bangkok to pursue a Master's degree. 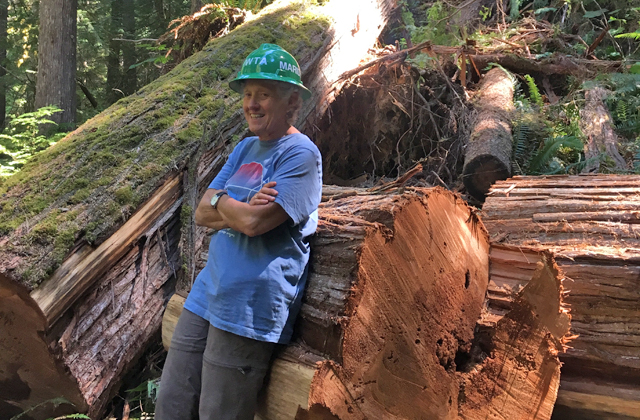 "I didn't want to just sit around doing nothing in retirement."

That's what Maridee BonaDea told WTA crew leader Charlie Romine, when she asked what brought Maridee out to a WTA work party.

"A friend of mine has talked about doing trail work with WTA for years, but she was retired and I was still working. Last summer was my first chance to volunteer and loved it all: the team work, going to different parts of the Pacific Northwest, and feeling I was making a difference."

Volunteer work always makes a difference. Whether they're clearing drainage or building a bridge, the work of volunteers is, increasingly, helping keep public lands open. And volunteer builds new skills and knowledge too, as Maridee learned.

"The technical work of building the bridge [at Notch Pass] and moving a 49-foot log fascinated me. Plus, several of the people on the work party know the Olympics like the back of their hands. What a wealth of knowledge they shared."

Maridee is well on her way to developing her own wealth of knowledge, gleaned from hands-on trail maintenance experience. She completed nine work parties and earned her green hat before heading out on a new adventure. She's gleaning knowledge in Bangkok now, where she's pursuing a Masters in Human Rights. So much for sitting around doing nothing in retirement.

"For years I have been involved with different progress movements, starting with the Feminist Second Wave. When I came to Seattle I became active in the Coop movement in the seventies and list goes on.

After serving in the Peace Corps in Mali from 2008 to 2010, I started doing anti-racism work volunteering with the City of Seattle and the Council on American Islamic Relations.

I want to continue this work in some way in retirement and what better way than going abroad and getting a world perspective."

What better way indeed. But despite her thirst for knowledge, she sees a return to Washington in her future: "In my twenties, I hiked all over these mountains and hope to do some this in retirement. I will miss WTA trail work and plan to participate when I get back."

We'll be here, Maridee. Be safe, have fun, and get some work done.