Skip to content
Volunteer Spotlight: Pat Limberg Pat Limberg has been volunteering on trail since WTA's trail maintenance program was a relatively new part of our work. She's stuck around, both on-trail and as an office volunteer, and is happy to see that WTA is still devoted to trails and the wide range of people who care deeply about protecting the places they love to play. https://www.wta.org/news/signpost/volunteer-spotlight-pat-limberg https://www.wta.org/news/signpost/volunteer-spotlight-pat-limberg/@@download/image/Pat by Austin Easter.jpg

Pat Limberg has been volunteering on trail since WTA's trail maintenance program was a relatively new part of our work. She's stuck around, both on-trail and as an office volunteer, and is happy to see that WTA is still devoted to trails and the wide range of people who care deeply about protecting the places they love to play.

Last year, 4,700 people volunteered on trails all over the state of Washington. While there's impressive strength in numbers (like donating $3.9 million of labor on 240 trails in 2016) WTA also likes to highlight some of the individuals who make that possible. Pat Limberg has been a volunteer with WTA for two decades, since the trail maintenance program was still a new part of our work, and volunteers in the office once a week.

Over the years that she's been involved with WTA, Pat has seen many changes. But many things have stayed the same: WTA is still devoted to trails, and work parties still attract a wide range of people who care deeply about protecting the places they love to play.

Pat first heard about WTA work parties when she saw a flyer at the old REI in downtown Seattle. Pat was a hiker, and she thought trail work could be a good way to learn more about hiking and explore new trails. On her first work party, the woman leading the trip talked about the first weeklong trips that were going out that summer. Pat and her husband, Jesse Shook, signed up and went out on WTA’s second weeklong trip. They spent the time in the Entiat, clearing debris from an avalanche and rerouting a trail.

“It went really well and we had a great time,” Pat said. 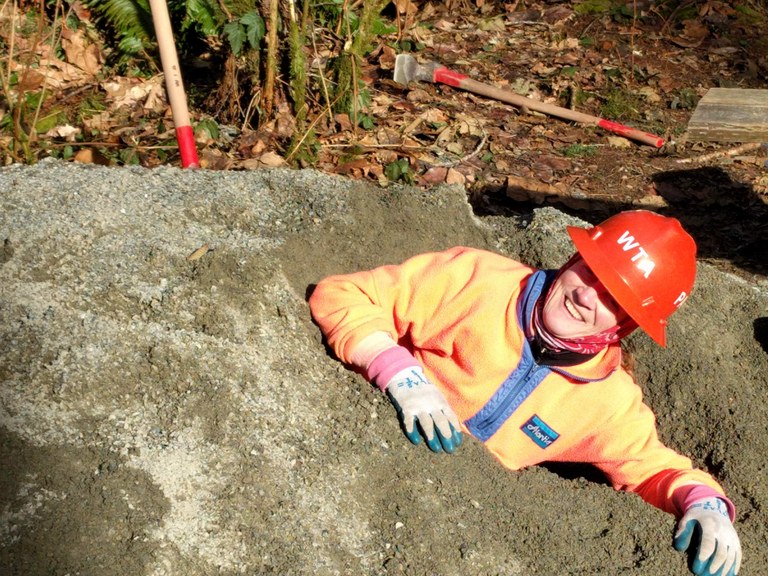 Pat Limberg taking a break in the dirt during a chilly winter work party at Meadowdale Beach Park. Photo by Austin Easter.

Since then, Pat has gone out on one or two weeklong trips every summer, though now we refer to them as Volunteer Vacations. In recent years, since she retired, she has also increasingly volunteered on day trips. She has nearly 400 days of trail work to  her name.

Over the years, Pat has watched the trail maintenance program grow in many ways. When she first began volunteering, she knew nearly all the volunteers she went out on trail with. Now, there are so many volunteers, she meets new people on every trip. WTA has also expanded the offerings for youth, something Pat appreciates.

“That’s really been a plus, to see how the whole youth program has grown,” she said.

She’s also seen a change in the type of projects that WTA takes on. In the early years, most of the work was annual maintenance. Of course, WTA still does that, but now, we also tackle bigger projects, including building trails, constructing bridges and logging out sections of trail.

Pat became a crew leader early in her time with WTA but was delighted when WTA started hiring staff to serve as crew leaders. She found she prefers serving as an assistant crew leader and assisting the blue hats in charge. While Pat has learned new trail work skills over the years, she also has found that her personal outdoor skills have increased. After a number of weeklong trips with WTA, she had the confidence to go out on much longer personal backpacks.

Pat plans to head out on another weeklong trip this summer, and she’ll be continuing to do day trips too. After all this time, she’s still excited to get out on trail.

“I really enjoy the work, I enjoy the people, and the atmosphere is really fun,” she said. “And it introduces me to places I wouldn’t know of otherwise.