Skip to content
Newest 'Orange Hats' Lend a Helping Hand on Trail Meet the five new assistant crew leaders, or 'orange hats,' who you might meet on a volunteer work party this summer. https://www.wta.org/news/signpost/welcome-to-our-newest-orange-hats https://www.wta.org/news/signpost/welcome-to-our-newest-orange-hats/@@download/image/puget-sound_anna-roth.jpg

Meet the five new assistant crew leaders, or 'orange hats,' who you might meet on a volunteer work party this summer.

On a work party, the crew leader—the person wearing the blue hard hat—is in charge. But WTA work parties often have so many enthusiastic volunteers that the crew leader sometimes needs a little help. Enter our volunteer assistant crew leaders, better known (and easily identified) by the orange hard hats they wear.

ACLs help the crew leader by providing guidance and a helping hand to volunteers, as well as insight and feedback to the crew leader when it comes to the project at hand. This season, we're happy to announce five new volunteer orange hats joining our team. Come out to a work party in your area and you just might meet one of these excellent individuals.

Doug Murray: ditching the desk job for a grub hoe

Where you'll run into Doug: On trails in Puget Sound.
Favorite tool: The tool that gets the job done most efficiently, but I'm partial to the grub hoe.
Favorite snack on trail: GORP
First WTA work party: Bean Creek Basin week-long (volunteer vacation) in 2012.
Why did you volunteer? After 30-plus years doing a desk job and raising kids it was high time to get outdoors and do some physical labor.

Lezlie Cox: snacks on seaweed and wields a Pulaski

Where you'll run into Lezlie: On trails in Puget Sound.
Favorite tool: Pulaski
Favorite snack on trail: On cold work parties—cheese. On hikes—seaweed and chocolate-covered coconut macaroons.
First time volunteering with us: I volunteered in 1997, but my memory fails in the particulars.
Why did you volunteer? Greg Ball and the enthusiastic if slightly demented volunteers of WTA.

Pauline Cantor: volunteered for a week, and still at it 7 years later

Where you'll run into Pauline: On trails in Puget Sound.
Favorite tool: Green grubber
Favorite snack on trail: Almonds and dried apricots
First WTA work party: A week-long work party (volunteer vacation) on Buck Creek Trail in the Cascades with Janice O’Connor in 2007.
Why did you volunteer? Our kids volunteered for WTA while in high school and we were getting their WTA magazines. Over lunch one day, we noticed an article advertising the week-longs and thought it would be interesting to try out. We had a really fun time with Janice and the other volunteers and have been volunteering ever since. 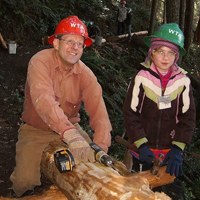 Where you'll run into Frank: On trails in the Northwest.
Favorite tool: I think the grub hoe is my favorite tool.
Favorite snack on trail: My favorite snack would be an Odwalla bar.
First WTA work party: My first WTA work party was in 1999 on a weeklong (volunteer vacation) with Greg Ball as our crew leader. It was on that trip that I met Jeroldine, we were married two years later.
Why did you volunteer? I want to give back by helping maintain the trails that I love so much.

Richard Pedersen: hooked on the fun, the challenge and the satisfaction 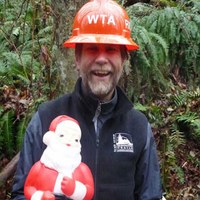 Richard takes some time with Santa during the end of the 2013 season. Photo by Jon Nishimura.

Where you'll run into Richard: On trails in the Northwest.
Favorite tool: The shovel
Favorite snack on trail: A Clif Bar, for now the Pecan Pie flavor
First WTA trail work party: I first worked with WTA on the Baker River Trail in June 2010.
Why did you volunteer? I had recently retired, moved to Bellingham, and was looking for an outdoor organization to get involved with. WTA and trail maintenance caught my fancy. After the first work party I got hooked on the fun, the challenge of working in the dirt and rocks, and the satisfaction of leaving the trail in better condition than I found it.

Les Baddgor: wished he had picked up the green grubber earlier 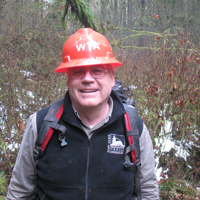 Where you'll run into Les: On trails in the Southwest.
Favorite tool: Depends on what we are doing, probably the green grubber.
Favorite snack on trail: Probably an apple.
First WTA work party: I was with the Thursday crew at Cape Horn in the Gorge.
Why did you volunteer? I have been a member of WTA for several years and always wanted to join a work party, but never did so until after I retired. I wish I had started sooner.