Skip to content
What Makes the Vivid Colors in Mountain Lakes? If you’ve hiked to many mountain lakes, you’ve likely noticed that many of them are particularly blue — some almost seem otherworldly in their intensity. But what makes those lakes such an eye-popping color? https://www.wta.org/news/signpost/what-makes-the-vivid-colors-in-mountain-lakes https://www.wta.org/news/signpost/what-makes-the-vivid-colors-in-mountain-lakes/@@download/image/lyman lake from cloud peak James Benthuysen.jpeg

What Makes the Vivid Colors in Mountain Lakes?

If you’ve hiked to many mountain lakes, you’ve likely noticed that many of them are particularly blue — some almost seem otherworldly in their intensity. But what makes those lakes such an eye-popping color?

One of the joys of hiking in Washington is the stunning beauty of our alpine lakes. If you’ve hiked to many mountain lakes, you’ve likely noticed that many of them are particularly blue — some almost seem otherworldly in their intensity. But what makes those lakes such an eye-popping color? Well, a lot of it has to do with what’s in the water — and what isn’t. Here’s the basics. 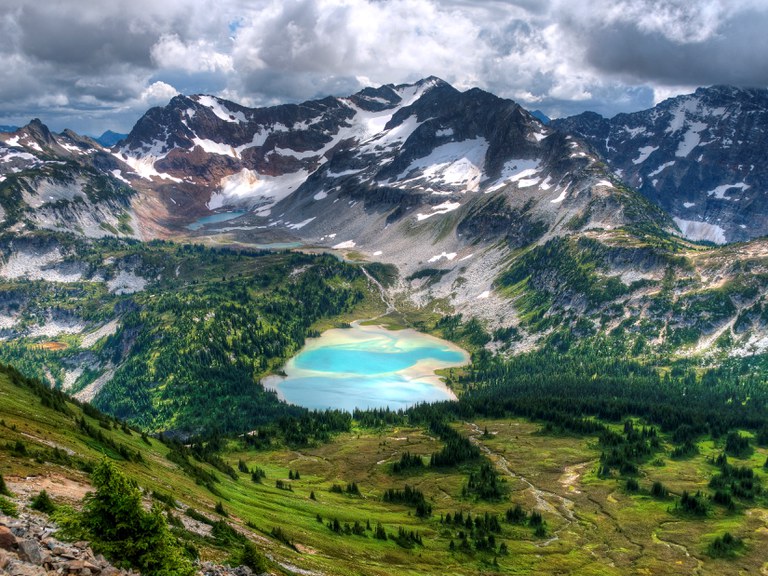 The bright blue Lyman Lakes from atop Cloudy Peak. Photo by James Benthuysen.

For lakes that are crystal clear, transitioning to vivid deep blues, the color can mostly be attributed to what’s not in the water. In this case, not a lot of silt or biological material. These clear lakes are often at higher elevations or in very cold areas. These lakes have fewer nutrients and a shorter growing season, so they don’t get as much algae or other biological material growing in them. That means that the water tends to be clearer.

To understand why those lakes appear blue, it helps to understand that light travels in waves and that different colors of light have different wave lengths. At one end of the spectrum, we have red and orange, with relatively long wave lengths. At the other end of the spectrum, we have blue and violet, with shorter wave lengths. When light hits the water, most of the longer wave lengths — red, orange and yellow in particular — are absorbed. But the blue color range is not absorbed, meaning that after it passes through a depth of water, the blue color is what you see. And without any sort of debris in the water, you get a clear, vivid blue.

Also, if you look at a clear lake, you’ll probably notice that the blue color gets darker and deeper as the actual depth of the water gets deeper. That’s because it’s passing through more water and you’re not seeing any color from the lake bottom. 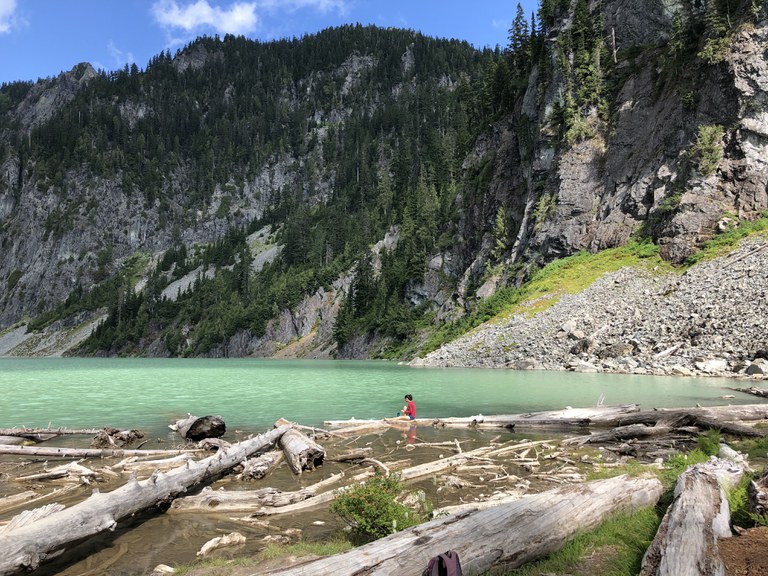 Some lakes have a color so spectacular and unexpected it seems Photoshopped. Think of lakes like Diablo Lake, Blanca Lake and Lyman Lakes. Those lake appear a milky turquoise color that can shift more blue or green depending on the lighting and other factors. The color in those lakes is caused by something called glacial flour. The lakes are fed by water that runs off of glaciers, and that water carries with it fine particles of rock that have been ground up by the massive weight of the glaciers. (Think of a glacier acting like sandpaper over the underlying rocks.)

When that flour ends up in the water, it’s so fine it stays suspended. This glacial flour affects how the sunlight is absorbed — mostly absorbing the purple/blue colors of the spectrum. And because the water is absorbing the reds, oranges and yellows, what you end up seeing is mostly green with some blue — hence the spectacular colors.

HeartyShwack on What Makes the Vivid Colors in Mountain Lakes?

Oh hey there! This is a phenomenon I got totally obsessed with a couple years ago. Here's some extra depth: "Is the glacial flour or rock flour itself blue/green?" No?? The color you see is a result of certain *size* particles suspended in water and the way light "scatters" when it hits. "Does that mean I could put some gray powder of the right size in some water and it would turn blue?" Yes! I've done it. Clay particles are the right size, so are the fat globules in milk. You just need it to be very dilute and it will become sky blue. Different particle sizes make different colors. Slightly larger particles scatter green and slightly smaller scatter blue. You'll notice in the spring a number of our rivers are green and they become blue by late summer. Lake Diablo is a great example. This reflects water speed (faster water carries bigger stuff) and the fact that the larger particles settle to the bottom faster. Sometimes water gets colored for other reasons, often dissolved metals from volcanism in volcanic lakes but also salt in salt lakes. The Rio Celeste in Costa Rica has a noteworthy mechanism. Two rivers come together, each with necessary ingredients to grow aluminosilicate minerals and at the confluence the water goes from clear to lush milky blue.