Skip to content
Wildfires Continue to Burn Across Washington Continued hot and dry weather conditions have left Washington vulnerable to wildfires this summer. Get the latest info on current fire conditions and campfire restrictions. https://www.wta.org/news/signpost/wildfires-continue-to-burn-across-washington https://www.wta.org/news/signpost/wildfires-continue-to-burn-across-washington/@@download/image/horseshoe-fire-adams-inciweb.jpeg

Wildfires Continue to Burn Across Washington

Continued hot and dry weather conditions have left Washington vulnerable to wildfires this summer. Get the latest info on current fire conditions and campfire restrictions.

In the northeast corner of the Pasayten Wilderness, the Newby Lake Fire has closed Horseshoe Basin.

On the west flank of Mount Adams, the Horseshoe Fire has prompted closures within Mount Adams Wilderness south of Riley Camp to protect hiker safety. The following trails, are closed:

Wildfires continue to crop up around Washington and officials are asking for extra vigilance in containing human-caused fires during the upcoming 4th of July weekend. In light of the extremely dry conditions across the state, here are some updates on current fires and restrictions:

The Thunder Creek Fire that has burned just over 100 acres has seen encouraging progress over the past week, and is now 60% contained. Please note the following campground and trail closures for the area:

These closures will remain in effect until further notice.

The Paradise Fire that has currently burned more than 1,000 acres in Olympic National Park in the Queets Valley is currently at 21% containment. Please note the following trail closure:

This closure will remain in effect until further notice. 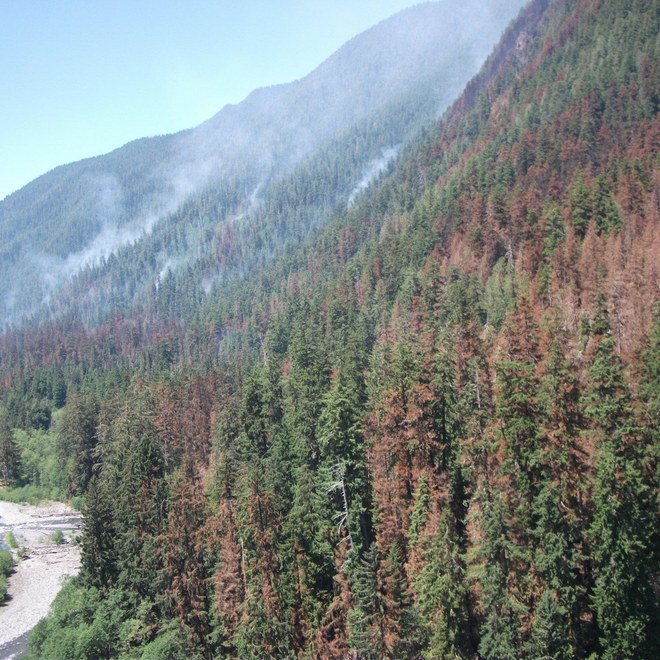 Paradise fire burning in the Queets Valley. Photo by InciWeb

Tip: If you ever have a question about hiking in a region with an active wildfire, contact or visit a ranger station.

Due to hot temperatures and low moisture across the state, campfire restrictions are in place to prevent future wildfires. Here are some details on current restrictions:

If you are camping in an area without a burn ban, make sure your campfire is built and put out responsibly. The advice below is adapted from guidelines from the Gifford Pinchot and Mount Hood National Forests Fire Staff:

Fires can often creep along the ground, slowly burning roots and dead leaves. Days later, the smoldering fire could break out into a real wildfire.

If you are backpacking, brush up on your backcountry fire safety and best practices.

Did you know you can track current wildfires using our very own Hike Finder Map? To see an overlay of current wildfire locations, visit the map and select the 'USFS Fires' button at the top. Areas with active wildfires will show with a red outline. This is a great way to make sure your weekend destination isn't nearby!