Skip to content
'You Belong' Washington-Based Film Centers the Stories of Women of Color A new film seeks to build community in the outdoors for women of color — and help reshape the narrative of who belongs in outdoor spaces. https://www.wta.org/news/signpost/you-belong-washington-based-film-centers-the-stories-of-women-of-color https://www.wta.org/news/signpost/you-belong-washington-based-film-centers-the-stories-of-women-of-color/@@download/image/Chelsea.and.Michelle Project Reclamation film.jpg

A new film seeks to build community in the outdoors for women of color — and help reshape the narrative of who belongs in outdoor spaces.

“We’re here to tell you, you belong.”

A group of women in Washington are working to build a welcoming community, where all Black, Indigenous and women of color can truly feel that they belong.

The beginning of that work is “Expedition Reclamation,” a documentary sharing the stories of Washington state Black, Indigenous and women of color (BIWOC). The film will be released this summer, and aims to help counter the dominant narrative of outdoor sports, which are often portrayed as white and male endeavor.

“Our twelve characters present counter-narratives to mainstream outdoor culture, through a tapestry of stories woven together in celebration of resilience, belonging, and everyday connection to our natural world.”

“We paddleboard, snowboard, climb, hike, snowshoe, and swim; we also sing, pray, forest bathe, heal, and thrive. In every activity and every instance, the women in this story show up boldly to reclaim what it means to be “outdoorsy.” 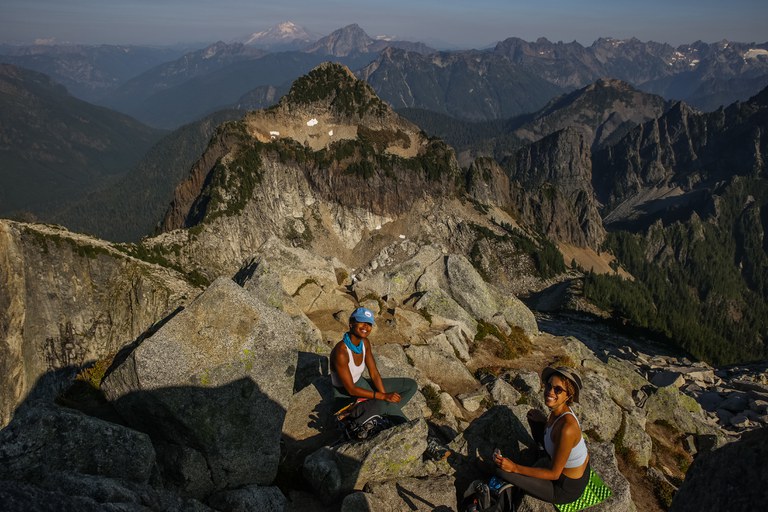 Chelsea and Michelle are both characters in the upcoming "Project Reclamation" film, which is part of an effort to build community in Washington state and beyond. Photo courtesy Chelsea Murphy.

The creators of the project aren’t stopping with the film. It’s just the beginning of the Brave Space Project, which is working to a future where Black, Indigenous and women of color feel a sense of belong in the outdoors.

The creators believe the project will help heal some of the scars inflicted by racism and sexism, and help tell a new story for BIWOC in the outdoors.

(Readers of WTA's magazine or website may recognize Chelsea Murphy, who is co-directing and co-producing this film, as well as being one of the characters. Chelsea is passionate about building community in the outdoors and has written for the WTA magazine. You can read her stories about her journey to find comfort in the outdoors as a Black woman and how she found that embracing her natural hair allowed her more freedom outside. You can also follow her on Instagram @she_colorsnature.)