Gear designers help you get out with the best equipment. Meet a product developer with Atlas Snowshoes whose connection to trails runs deep.

While you may not think about snowshoes until the world becomes a snowy playground, there are folks out there who snowshoe every month of the year. Product development engineers like Stefanie Zulauf of Atlas Snowshoe Co. are on snowshoes year round, designing and perfecting gear for the upcoming season.

Testers need as much time as they can get on the snowshoes to iron out any kinks before the product goes to market. 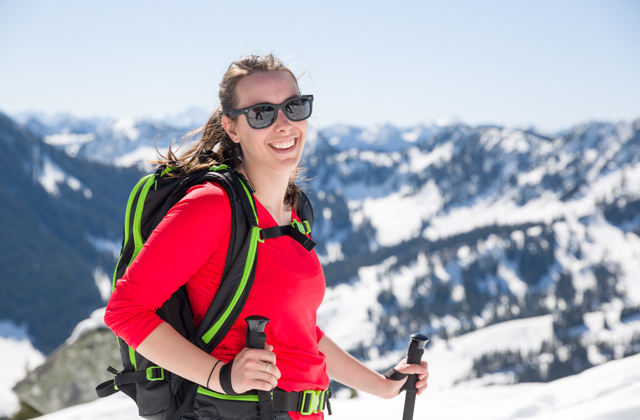 Stefanie Zulauf on a snowshoe test run in April. Photo by Daniel Silverberg.

Luckily, in Washington, snow sticks around for quite a while at high elevations. Stefanie and I snowshoed Skyline Lake on April 1 for this conversation, but Atlas Snowshoe Co. designers can find snow at Paradise on Mount Rainier as late as June. Once the snow melts, they head for more unconventional terrain that mimics snow, like turf fields or sand dunes.

Designing gear for the field, in the field

“We are very thorough in our on-snow testing, but we have to get creative about where we can test when the snow is gone.”

Testing occurs in groups of three to four, sometimes more. And when there is snow present, Stefanie and her coworkers test in areas people will be using.

“We test in areas anyone would go—we want to be sure the product performs well in the places people will be using them.” 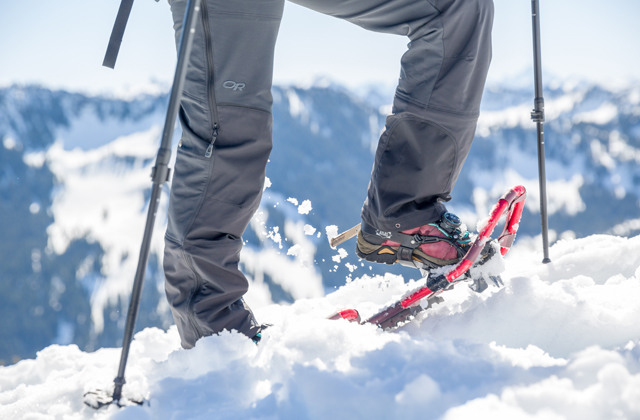 Skyline Lake is a popular snowshoeing location with a variety of terrain, so it makes sense to test there. Photo by Daniel Silverberg.

In addition to testing on real terrain, they consider ability of the user, ease of use, and durability of the shoe. Sometimes, testers even wear one snowshoe on the left and one on the right to get side-by-side comparisons. After a few hours walking on various terrains, they come back together and discuss everything.

“We test models that are comparable to what we’re developing or the current model we’re reworking. Then, each tester has a form that rates flotation, articulation, control and traction. Those are the big four things we look for in the snowshoe. And we talk about what we felt, what we liked, and what didn’t work for us.”

Designers also take into account feedback from the public.

“We refer to reviews online, talk to our sales reps about what is selling well and what people want more of. We ask our customer service staff what they’ve heard. We also check in with the warranty department, to see what can be improved.” 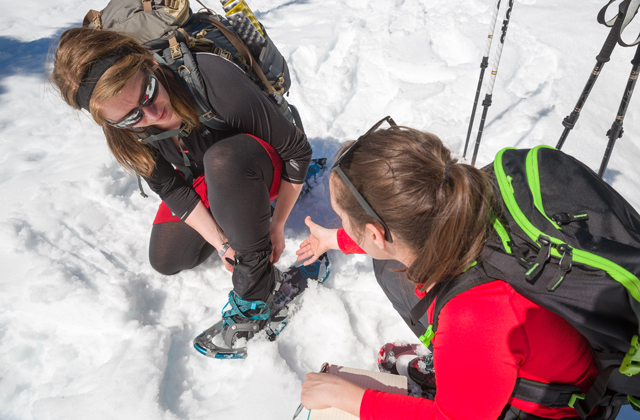 Discussing features of snowshoes in the field. Photo by Daniel Silverberg.

Turning your passion into a career

Trails and enjoying the outdoors have long been part of Stefanie’s life. She and her family hiked off of Highway 12 a lot growing up.

“We hiked Packwood Lake almost every summer. It’s kind of a two-fer outing because there are also lots of hills around there with huckleberries so you could get your hike in and also a snack.”

Shorter day hikes with her family set the base for Stefanie’s first long hike, an out and back into the Enchantments that she did in college.

“I just loved it—it’s a huge variation in the terrain and the natural environment, and the peaks along the way are so impressive. And liked that we didn’t have to go all the way through—you go as far as you want to go and make it back.”

She started climbing as well, which, “… goes hand in hand with hiking, because sometimes you have to hike to get to where you want to climb.”

All that time spent in the outdoors is what clinched Stefanie’s interest in working in the outdoor industry, and after she graduated, she decided to pursue a career in outdoor recreation. 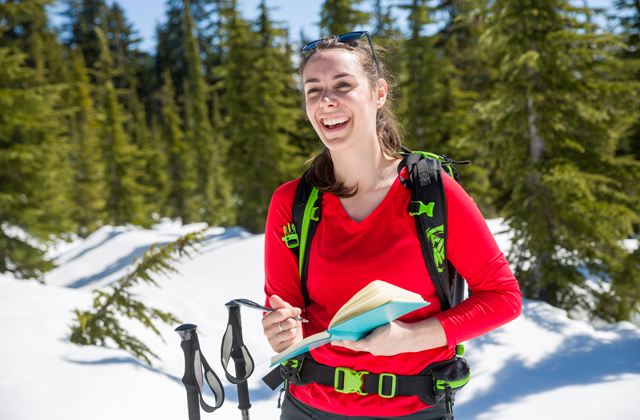 Stefanie laughs as she makes notes. Photo by Daniel Silverberg.

“I was more interested in making what I loved to do my career than I was in finding something that was super high-paid, so I was very particular about what field I went into. Product development is a great match, because I get to go out once a month, and do our field testing. It’s a cyclical process, so each day at the office is a little different.”

As the seasons change, Stefanie shifts from hiking to skiing and snowshoeing in her spare time. But whether she’s hiking a trail, testing at Paradise, or using her gear on a winter route, she gets the same result from spending time outside.

“Being outside gives you an escape from fast-paced work and responsibilities—things that are taking up a lot of your time and mental energy. And the outdoors gives you a place to be around people, have conversations and enjoy the beautiful area we live in.”

Protecting your industry, preserving your passion

Snow is K2’s bread and butter. No snow, no need for winter gear. But it’s not just about selling the gear. The mental renewal and physical exercise that a snowy walk provides are also extremely valuable, so K2 Sports and Atlas Snowshoes are working to preserve them for the future.

“Snow is so important to our industry," Stefanie says. "We want to make sure there’s some out there so we can get outside in the winter. It’s increasingly valuable to have trails to recreate on—and that they’re well-respected.” 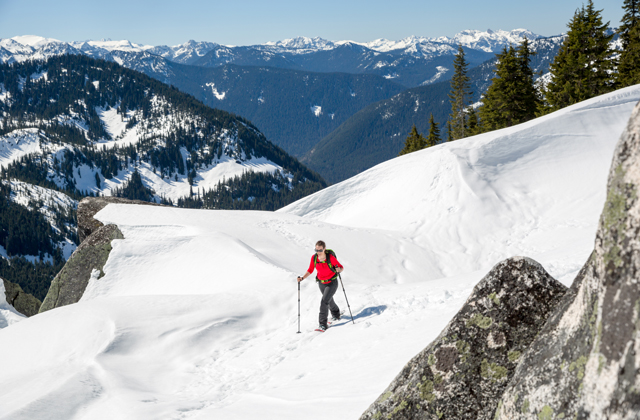 While climate-friendly legislation is critical, Stefanie thinks a lot of the respect for the environment can be taught on a more personal level.

“I think people don’t know what they don’t know. WTA is the go-to place for a lot of information about hiking responsibly and Leave No Trace, but if you don’t know to look, how will you know how to be responsible out here? A lot of the education I received was from people I hiked with. They taught me about trail etiquette and respecting the environment. I’ve been doing that, passing it on myself. Paying it forward.”

As we finished our day at Skyline Lake, I asked Stefanie where she was heading next.

“I’ll probably go test another pair back up the trail a little way. We need to start finalizing designs for 2016-2017.” 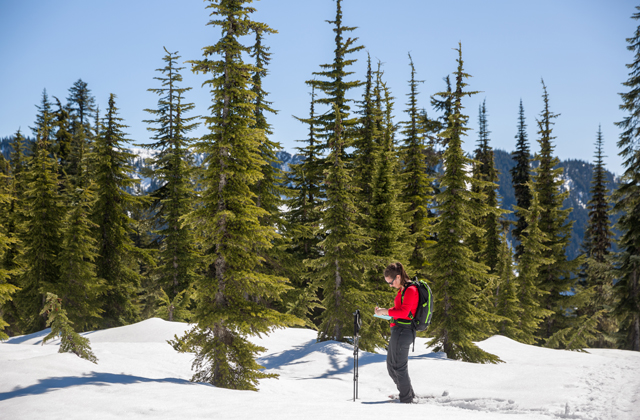 Stefanie makes notes on another pair of snowshoes in the field. Photo by Daniel Silverberg.

Want to try snowshoeing or just learn a little more about getting out in winter? Check out our winter resources, and this blog on finding safe places to snowshoe.