Recovering Trails in the Entiat
The WTA pro crew enjoying the sweeping views along the Entiat River after a day of work maintaining the trail. Photo by Ginevra Moore.

Recovering Trails in the Entiat

Since 2017, WTA trail crews have been visiting the Entiat to help mitigate wildfire damage. And in 2021, we were able to give the area extra attention thanks to our first ever backcountry pro crew. By Rachel Wendling.

In late June of 2015, lightning strikes ignited the Wolverine fire along the Entiat River Valley of the Okanogan-Wenatchee National Forest — a beloved backcountry destination nestled in the mountains between Wenatchee and Chelan. The fire ripped through the dry, eastside forest, burning over 62,000 acres before it was contained.

The Entiat River Valley is often viewed as a backpacker's paradise — with the long, 15-mile Entiat River Trail serving as a backbone to dozens of options for loops, traverses and out-and-backs. Keep it short and family-friendly with a 2-mile hike into Myrtle Lake. Enjoy a long weekend with a lollipop loop up and around Cow Creek Meadows, Larch Lakes and Pomas Creek. Or try a jaw-dropping traverse up to Ice Lakes and down through Carne Mountain. Hikers can even sneak on down to the secluded shores of Lake Chelan via the Emerald Park junction.

But after the Wolverine fire, recreational access to the Entiat was closed for years due to the hazardous conditions left behind by the flames. Trail structures were destroyed or badly damaged. Charred trees covered the trail. Mudslide risk increased substantially due to the loose earth exposed by the fire.

Land managers worked diligently to restore critical bridges, remove hazard trees and stabilize the surrounding land so that hikers, campers and other trail users could safely begin returning to the area. The trails throughout the valley became accessible once again, but the conditions were not the backpacker's paradise they once were.

The impacts of wildfires are felt for years after the flames have been extinguished. Burned forests are deeply susceptible to seasonal storm damage — strong winds knock more dead trees across the trail, rain washes away the tread that is no longer supported by living root systems — making annual maintenance all the more important. 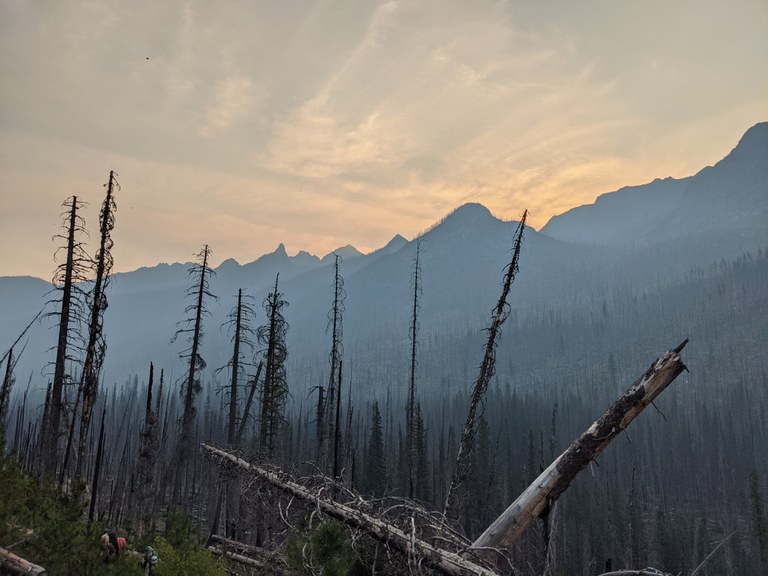 Layers of burnt forest and smoky skies in the Entiat Valley. Photo by Zachary Toliver.

WTA Gets to work

Since 2017, WTA trail crews have been visiting the Entiat to help mitigate wildfire damage. But this year, we were able to give the area extra attention thanks to our first-ever backcountry pro crew. The pro crew has spent their entire summer season working within the Okanogan-Wenatchee National Forest, focusing much of the work along the Entiat River Valley and its access trails.

The Entiat River Trail, the backbone of the valley, was in relatively nice shape for the first few miles, but conditions deteriorated the farther you hiked. In a trip report from last summer, reporter Must Hike Must Eat noted that, after 14 miles, "A few more alternating forest-meadows with a diminishing trail and eventually we reached a burn area with so many logs down and scorched soil that we were soon on our own."

The pro crew, spending an 8-day trip along the far reaches of the trail, cleared an astounding 231 fallen logs and brushed back overgrown vegetation along 8.6 miles of tread — over half the length of the entire trail! Sections of trail tread had become all but invisible under ash and logs in the burn zones, but the crew did their best to reconnect the dots and re-establish the path there once was. And, while they were at it, they repaired five drains, filled in some deep erosion holes and fixed up some crumbling rockwork.

A bit closer in, the pro crew worked in tandem with a volunteer Backcountry Response Team (BCRT) to clear the popular backpacking loop around Cow Creek Meadows and Larch Lakes. The pro crew, coming in from the southern end of the loop at the Myrtle Lake junction, spent two weeks cutting out 175 fallen logs up to the junction with Larch Lakes. Meanwhile, volunteers came in from the north end at the Larch Lakes junction and cleared all fallen logs up to the first lake, and brushed the Entiat River Trail up to the turn-off. In a trip report from August, the work of these volunteers did not go unnoticed — trip reporter bhweiler (who timed their loop trip perfectly after the fresh work) noted, "An extra shout-out and many thanks to the incredible crews from WTA up at Larch Lakes — their efforts made a huge difference!"

Tackling the eastern access point, the pro crew spent 8 days along the Emerald Park trail — which has notoriously been in rough shape — arriving via Forest Service boat to their starting point in Lucerne. Throughout their two visits, the crew brushed 5.5 miles of dense vegetation and cleared over 70 fallen trees. They also retreaded 75 feet of trail and widened a few narrow sections along a steep hillside. 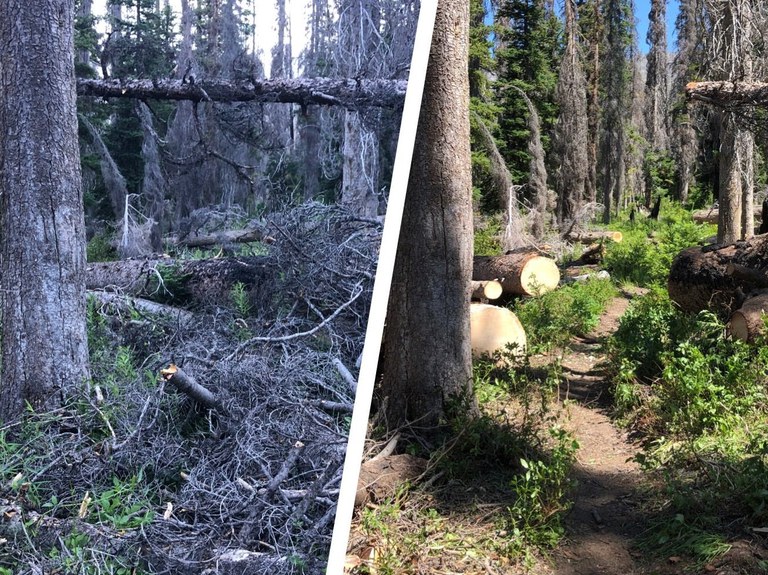 A before and after shot of a section of trail along the Entiat. Photos by Ginevra Moore.

To top off their work, the pro crew also made a dent in the backlog of maintenance along the Pomas Creek and Ice Lakes trails. Ice Lakes is an incredibly scenic section of trail, that is used by both hikers and climbers. The crew logged out 208 trees from the first 3 miles of this trail past the Entiat junction. And on Pomas, the work is far from complete (seriously... it's rough), but the crew was able to knock out a bit of tread improvement and brushing.

Looking back on our crew's full season of work across the Entiat, Jeffrey Arndt of the Entiat Ranger District noted,  "The work the WTA trails crews put in this summer leaves me almost speechless. The accomplishments they made were something I never thought I would see in the last five years I’ve been on the Entiat Ranger District. They were an integral part in regaining access to trails in the wilderness that have been covered with thousands of down logs for six years plus. From regaining access to the Headwall to Ice Lakes and even the Larch Lakes loop is something truly amazing."

The Entiat River Valley is an important slice of backcountry near Wenatchee — but the struggles it has faced are not unique. As wildfire season continues to grow longer and hotter across Washington, these beloved locations need long-term investment to help control future blazes and to pick up the pieces after a fire rolls through. Trails are literally falling off the map, but hikers can help put them back.

We are so blown away by the amount of work our crews were able to accomplish this season throughout the entire Okanogan-Wenatchee National Forest — and it was made possible thanks to our advocates, volunteers and members. We're looking forward to the continued revival of the Entiat River Valley and all lost trails around the state over the years to come. To keep up with the latest on our Lost Trails Found campaign and to find out how you can get involved, head to wta.org/losttrails.