Arch Rock Arch Rock is not an arch, but a rocky point on the ridge to the west of Arch Rock Spring in the Norse Peak Wilderness Area. The trip to the rock involves a 5.4 mile hike mainly on the Pacific Crest Trail (PCT) along a forested ridge to Arch Rock Spring, followed by a 0.6 mile boot trail to Arch Rock. From the top, the expansive views of the South Cascades are dominated by Mount Rainier, 20 miles to the southwest. https://www.wta.org/go-hiking/hikes/arch-rock https://www.wta.org/site_images/hikes/archrock.jpg/@@download/image/ArchRock.jpg

Arch Rock is not an arch, but a rocky point on the ridge to the west of Arch Rock Spring in the Norse Peak Wilderness Area. The trip to the rock involves a 5.4 mile hike mainly on the Pacific Crest Trail (PCT) along a forested ridge to Arch Rock Spring, followed by a 0.6 mile boot trail to Arch Rock. From the top, the expansive views of the South Cascades are dominated by Mount Rainier, 20 miles to the southwest. Continue reading

39 trip reports for this trail

Arch Rock is not an arch, but a rocky point on the ridge to the west of Arch Rock Spring in the Norse Peak Wilderness Area. The trip to the rock involves a 5.4 mile hike mainly on the Pacific Crest Trail (PCT) along a forested ridge to Arch Rock Spring, followed by a 0.6 mile boot trail to Arch Rock. From the top, the expansive views of the South Cascades are dominated by Mount Rainier, 20 miles to the southwest.

The trail starts on an abandoned road in the remnants of an old clearcut, which is now grass, small trees, and brush. It then enters a two-tiered forest of old growth trees with a seedling understory. The PCT is reached in 0.8 mile, at elevation 4880 feet, not the quarter mile on the sign to the west of the junction.

To the left (north on the PCT) are Government Meadows and the Camp Urich Cabin in about 0.5 mile. The cabin commemorates local forester Mike Urich. About 0.1 mile beyond the cabin is a junction with the historic Naches Trail Trail 1175, used by the Longmire party in 1853 get over the Cascades into Western Washington. The Naches Trail is now a motorcycle, ATV, and Jeep route over the Cascades.

To the right (south) is the PCT heading towards Arch Rock Spring, the only reliable source of water in late summer for many miles along the PCT.

The initial hike southbound on the PCT is not quiet on a summer weekend. The sounds of motorcycles on the Naches Trail and target shooting along the Greenwater River Road intrude on the stillness of the forest. This section can also be quite damp in early spring with the snowmelt, as evidenced by the numerous water bars and turnpikes.

In late summer the huckleberries along the trail will be ripe and provide sustenance for humans and bears. Deer, elk, and black bear inhabit this area leaving much sign, especially off the PCT on the game trails.

At 1.0 mile from the trailhead is the junction with the Maggie Creek Trail 1186, which descends westerly to meet the Greenwater Lakes Trail 1176 north of Echo Lake. At this point the PCT enters the Norse Peak Wilderness Area, leaving behind the motorized recreation, but not the sounds.

The trail makes a gradual climb in the forest to a local high point of 5150 feet, and then starts the descent toward Rod's Gap. During this descent, the sound of motorcycles finally fades away. At 2.3 miles is a switchback with views to the SW of forested ridges and the Raven Roost microwave tower. At Rod's Gap, 2.7 miles from the trailhead and 4810 feet of elevation, a narrow pass, the trail transitions to the west side of the crest for a 1.2 mile climbing traverse to Louisiana Saddle 3.9 miles from the trailhead.

The forested saddle has a dry campsite, and a junction with the Louisiana Saddle Trail 945-A, which heads east along the ridge to the County Creek trailhead.

From the saddle, the trail continues its gradual climb toward Arch Rock Spring. At 4.5 miles, the trail stays on the ridge crest above a large stark erosion area with pockets of flowers in early summer, and views to the SE toward Raven Roost.

At 5.3 miles, the trail crosses the stream from the spring and climbs along it for 0.1 mile, passing a large campsite before reaching the junction with the Arch Rock Spring and Arch Rock side trail at 5.4 miles and 5700 feet of elevation. The junction is currently marked with a scrap of wood nailed to a tree on the right, with 'Arch Spr' written on it in charcoal. 'Arch Rock' is written on the tree.

The boot trail to Arch Rock starts by going past the spring, which sits in a moss-covered basin just above the trail. After crossing the outlet stream from the spring, the trail descends and comes to a junction (0.1 mile). The left branch goes toward Arch Rock (the right branch drops down to another large campsite). From here, the trail traverses through very open forest for 0.1 mile, then starts a 200 foot ascent to reach the ridge crest at 0.4 mile from the PCT.

The trail stays near the ridge crest and its precipitous north side, reaching a view point of Arch Rock at 0.5 mile from the PCT. Some of the game trails go right over the edge and tufts of mountain goat hair can be found on brush near the edge. After a short descent and traverse across a steep dirt slope, the route climbs through dirt and grass to the top of Arch Rock at 5900 feet, where hikers enjoy the 270 degree view, from the southeast around to Mount Rainier to the southwest. The view continues past Rainier all the way to the northeast. Looking down west-northwest is Echo Lake and to the northwest is the sheer drop into the Greenwater River Valley.

For those interested in continuing south on the PCT, the trail goes through open forest and small meadows with flowers, with some views to the south and southeast. At 5.9 miles, the trail reaches a local high point before descending to a junction with the Cougar Valley Trail 941 at 6.7 miles and 5810 feet of elevation. This area is amenable to cross-country rambling through the forest and small meadows on the myriad of game trails used by the deer, elk, and bear.

From Enumclaw, take SR 410 eastbound for 20 miles to USFS 70 (located between SR 410 MP 44 and MP 45). Turn left onto FS 70 and follow it for 16.7 miles to the trailhead at Government Meadows Horse Camp. The first 10 miles are paved to the ATV trailhead for Naches Pass. From 10.0 miles to 15.3 miles, FS 70 is gravel with numerous side roads. Go straight at the junction at 15.3 miles. At 15.7 miles is a junction, take the right branch for the horse camp. From 15.7 miles to 16.7 miles the road is very rough and rutted with many side roads. Stay on the main road to reach the trailhead. 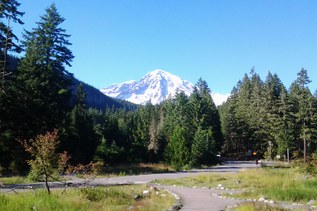