Elip Creek Elip Creek is a wild and challenging hike for those seeking an alternate approach to the Skyline Trail. It also makes a fine 21-mile loop by connecting to the Three Lakes and Big Creek trails, a route that climbs to subalpine meadows where picturesque tarns lie in solitude beneath tree studded ridges. https://www.wta.org/go-hiking/hikes/elip-creek https://www.wta.org/site_images/hikes/hike-image-2022-03-24-8928604922/@@download/image/Elip_Creek.jpg

Elip Creek is a wild and challenging hike for those seeking an alternate approach to the Skyline Trail. It also makes a fine 21-mile loop by connecting to the Three Lakes and Big Creek trails, a route that climbs to subalpine meadows where picturesque tarns lie in solitude beneath tree studded ridges. Continue reading


(5 votes) Log in to rate
Saved to
My Backpack

16 trip reports for this trail

Elip Creek is a wild and challenging hike for those seeking an alternate approach to the Skyline Trail. It also makes a fine 21-mile loop by connecting to the Three Lakes and Big Creek trails, a route that climbs to subalpine meadows where picturesque tarns lie in solitude beneath tree studded ridges.

Begin the Elip Creek Trail after walking 6.5 miles up the North Fork Quinault River Trail. A fine campsite sits near the intersection, which is marked with an old sign that reads, “Skyline Trail 4.6” and points left. Turn left here and begin what will be a series of switchbacks between stretches of steep ascent.

It is obvious from the beginning that Elip Creek is a misnomer – there is no creek here. Rather, the trail follows the nose of the ridge north of Elip Creek. The forest is thick and dark, and no water runs for the first half of the hike. Fallen trees litter the understory and add a chaotic look to the forest.

There is perhaps one short reprieve in the grueling ascent, around 1.5 miles and over 1,000 feet gained. But the grade quickly resumes its deliberate assault of the ridge. Eventually the rainforest gives way to silver fir, marking the higher montane zone, and huckleberry grows in profusion.

At 2.8 miles the majority of the ascent has been conquered and the trail eases into a noticeably gentler grade. The forest breaks up a little, and the sun finds a patch of ground here and there to illuminate. The ridge is now lower in profile, the trail following just north of its crest along a steady line.

Soon the trail breaks out of the forest proper and into a subalpine zone of mixed meadows and stands of mountain hemlock. Views reach far and wide, with the bulk of the North Fork Quinault watershed visible to the northeast. The walking is simply superb among brooklets and cedar puncheon.

At 3.6 miles the trail leaves the open meadow, drops 200 feet, and runs along a rough and tumble route through forest before re-emerging into semi-open meadows, some of which are small avalanche chutes. The meadows hold several charming rivulets that gurgle under stony tread.

At 4.6 miles and 3760 feet the Elip Creek Trail finally meets the Skyline Trail on a steep, scrubby slope. A poor site with enough room for one tent lies nearby, but the best options for camping are either north at Three Prune or south at Three Lakes. Both camps have ample space and reliable streams.

Along the ridge black bears are commonly seen browsing the slopes, especially in late summer. Often the weather is moody, with clouds clinging to the tree tops, or swirling about the void over the adjacent, precipitous valleys. And starry nights are enjoyed unhindered, being miles from the nearest artificial light.

Beginning in Hoquiam, drive north on Highway 101 for 38 miles, then turn right at milepost 126 onto South Shore Road. Continue down this road for 12.9 miles. It is paved for the first 8 miles and then becomes graveled past that. Arrive at a junction with the Quinault River Bridge. Turn left, crossing the bridge, and then turn right onto North Shore Road. Continue 3.5 miles. The road ends at the trailhead and a ranger station. Ample room for a dozen or more vehicles.

To reach the Elip Creek Trail, first hike 6.5 miles along the North Fork Quinault Trail to the junction just past the campsite along Elip Creek. Turn left at the junction marked "Skyline Trail 4.6" 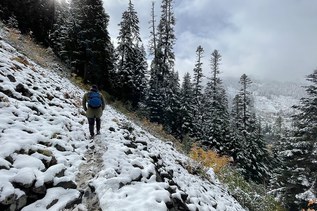