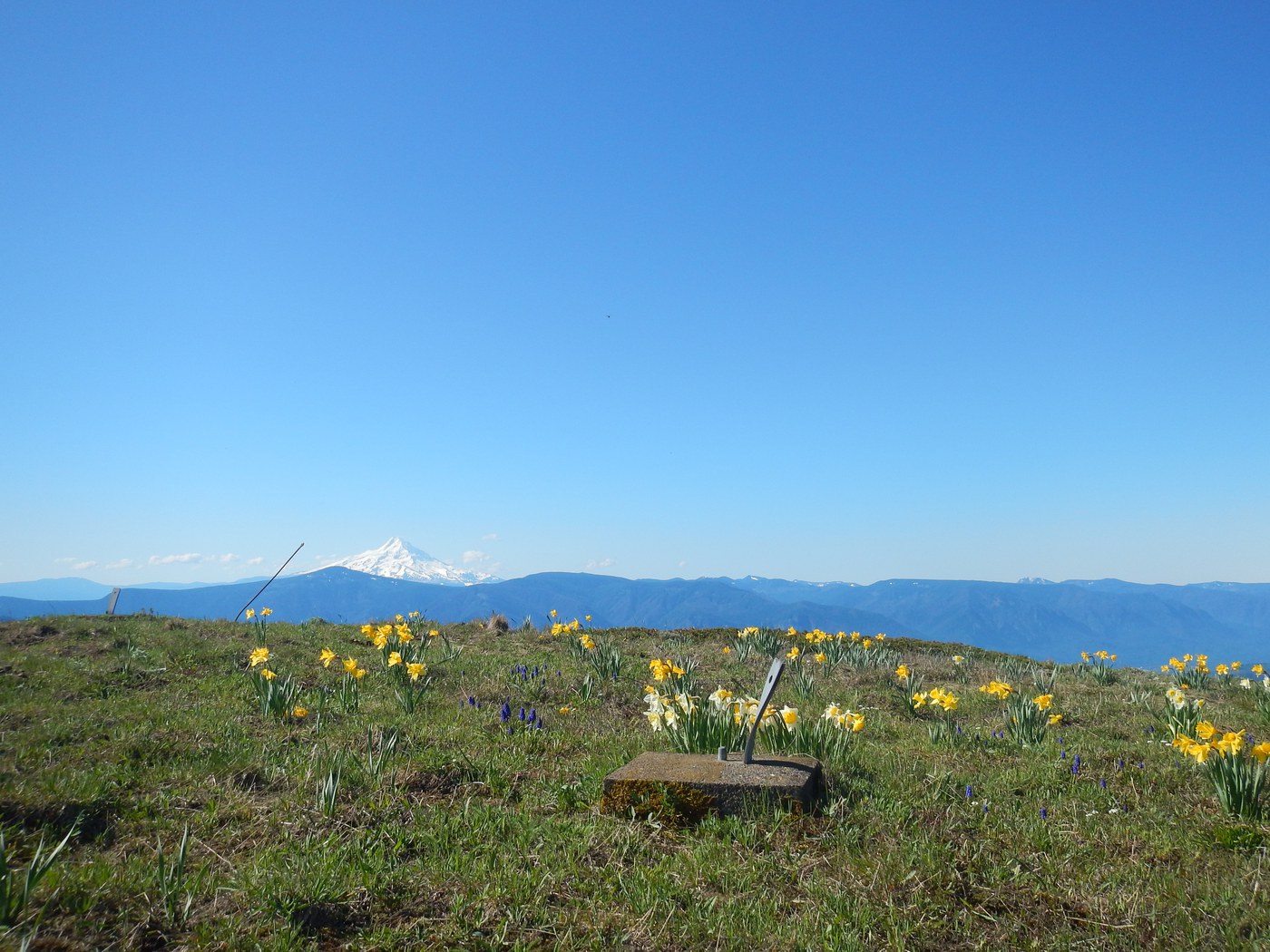 36 Trip Reports for this trail, below

Considering the unbelievable views and good wildflower display on this short hike, Grassy Knoll is a surprisingly quiet location for its proximity to the Gorge. Perhaps the long drive on rough forest roads keeps the majority of hikers away. In any case, you can get a great workout on this trail, and be rewarded by one of Washington’s most unique wildflower displays at the top.

The trail begins, tantalizingly, by making its way through an open field full of wildflowers. Look for paintbrush, larkspur, and shooting stars as well as many others, before diving into the forest. That stellar flower show is a tease – you’ll see trillium dotting the forest floor along the way, but the best displays won’t appear until you’re nearly to the Knoll.

Luckily, the top isn’t far away, since the trail begins to climb once you’re in the forest and it doesn’t really let up. Because it’s so steep, the quality has suffered in places, but it’s not hard to follow. Consider this: in addition to being the trail to a former lookout tower, this also used to be part of the Cascade Crest Trail, the original Pacific Crest Trail route, before it was moved to its modern location. Imagine carrying that heavy old backpacking equipment up slopes like this one!

At 1.2 miles, emerge from the forest to get views of the Big Lava Bed and the tip of Mount Adams to the east. You may also see some nice rock penstemon at your feet, so look down, too.

Duck back into the trees and continue hiking, eventually heading downhill 200 feet to a small saddle before beginning your final steep approach to Grassy Knoll. Here the flowers are back in force, and as you wind around the knoll to the summit, enjoy phlox, more larkspur and paintbrush and…daffodils?

These were probably planted by a former fire lookout, and while its unclear when the lookout was officially removed, it’s been a long time – nothing remains but the foundation and some broken glass…and the daffs, which bloom regularly right along with their neighboring wildflowers. Despite being commonplace in cities, it’s best to leave them be here; just like with all wildflowers, don’t pick them.

Look up from the flower show at your feet and take in Mount Hood straight ahead of you dominating the Gorge. That big chunky mountain in front and to the left of Hood, on the Washington side is Augspurger Mountain, another alternate to the always-popular Dog Mountain. Looking down and to the right, spy a little twinkle of the Columbia River, and straight west, the mass of Table Mountain and further to the north, the tiny peak of Silver Star. Turn left for a view of coy Mount Adams and the Big Lava Bed to the northeast.

WTA Pro Tip: If you’re wildflower hunting, it’s worth extending your hike two miles roundtrip to Grassy Pass. From the lookout site, simply continue up the trail and enjoy the flower show for up to a mile. Then turn around and head back the way you came.

Drive east on Highway 14 from Stevenson. After 3 miles, turn left onto the Wind River Road and drive through the town of Carson. 4.1 miles from Highway 14, turn right onto Bear Creek Road. For 3.6 miles this road is paved, and then, at a horseshoe bend, it becomes gravel. This is now Forest Road 6808, which you’ll take for 7.2 miles to an unsigned, three-way intersection. There are two forks along the way; in both cases the main road is obvious – the alternate road shrouded by overgrown trees and grasses in the track. At the first one, bear right to stay on the main road, and at the second bear left.

At the three-way intersection, take the left fork. This narrower, more rugged road is FR 68. There are few places for cars to pass, as well as more and larger potholes, so use caution on this section. Drive 2.1 miles to another junction, where you will turn right immediately to enter the parking area for Grassy Knoll. The trailhead is marked with a sign across the road from the parking area. 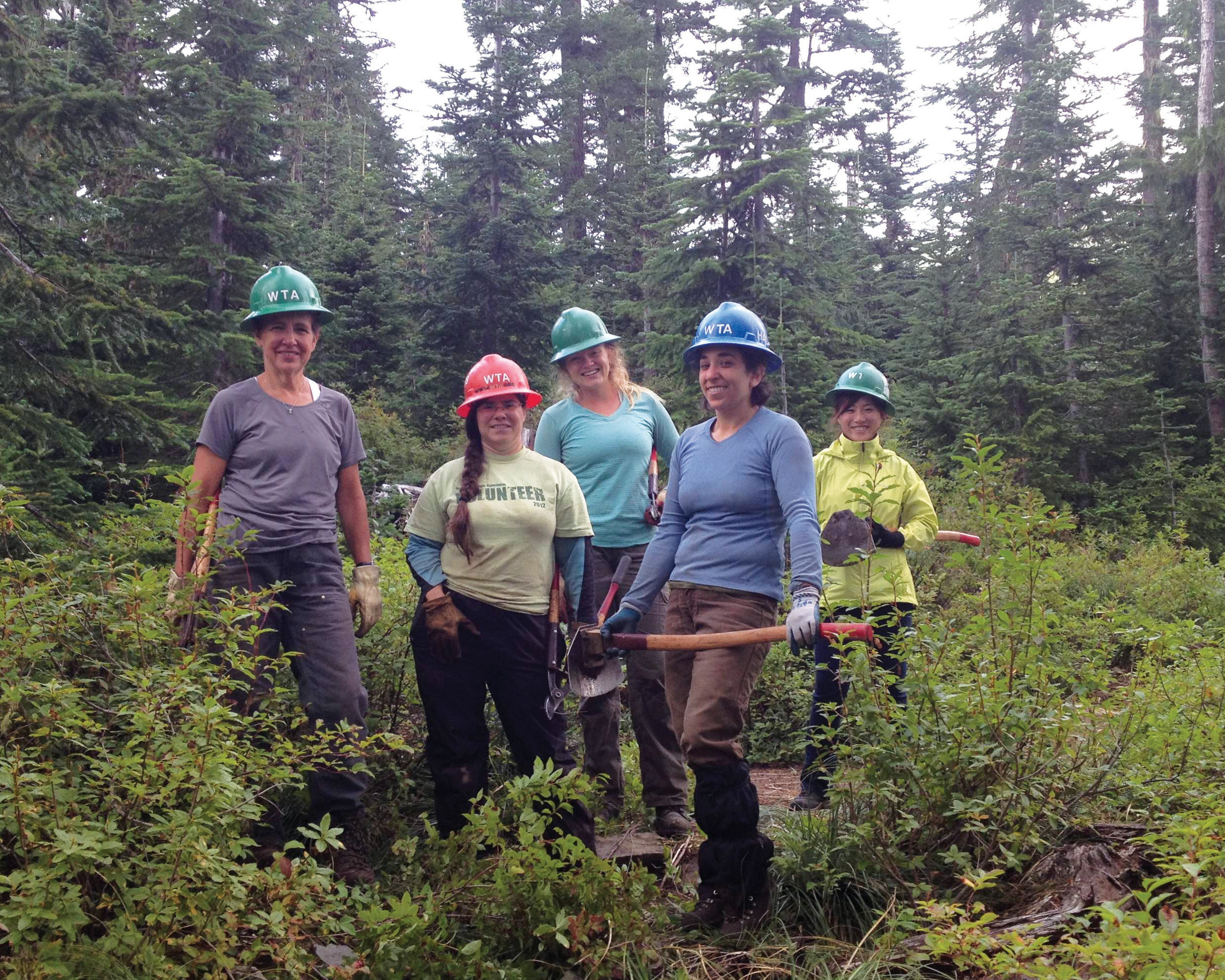 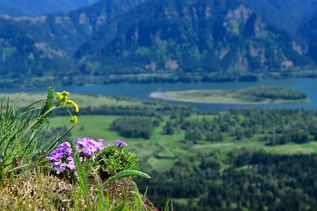