None
A backcountry permit is required to camp overnight in North Cascades National Park. Call the Wilderness Information Center at (360) 854-7245 the day of or the day before your trip to obtain a permit
Saved to
My Backpack 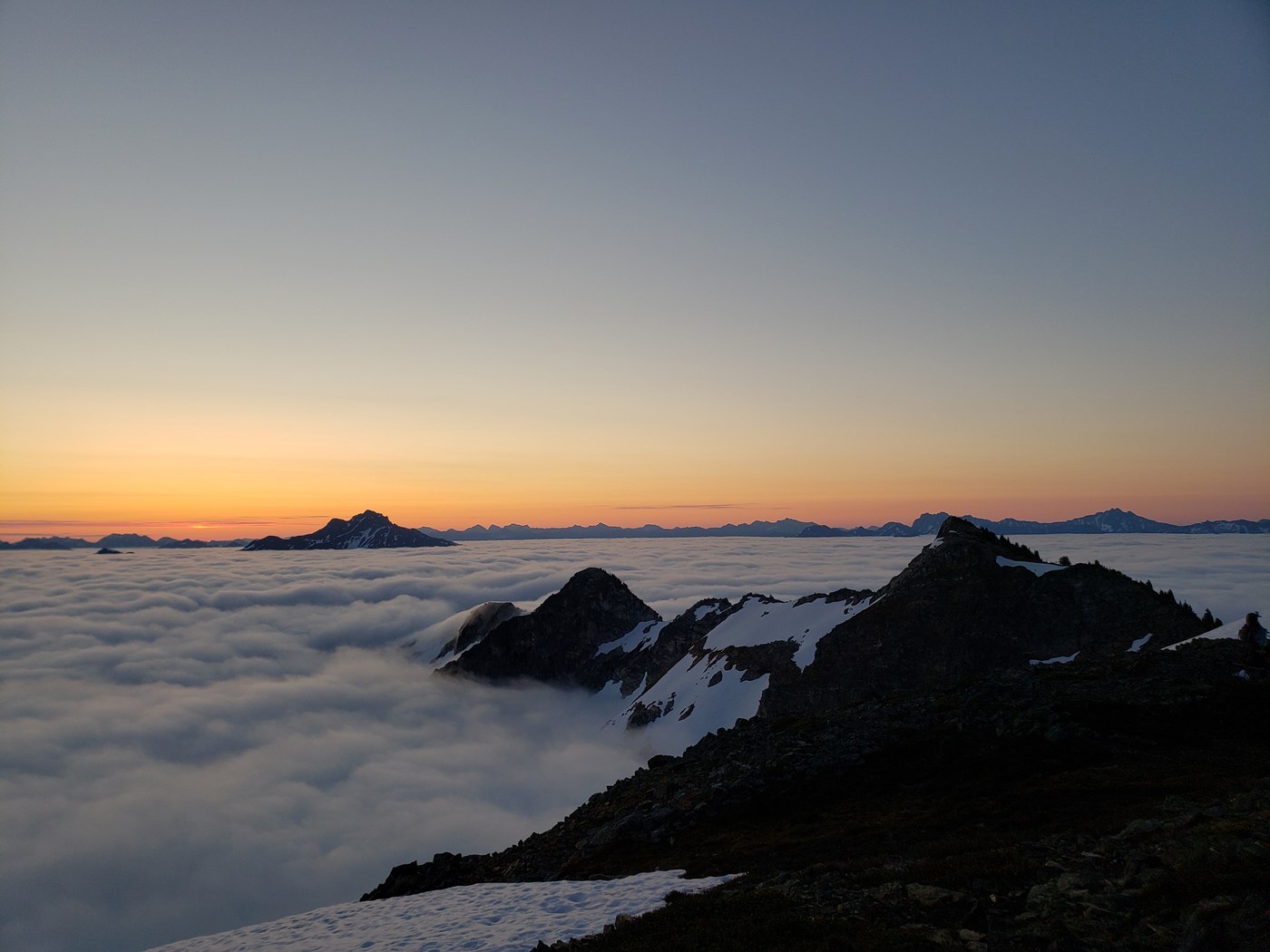 78 Trip Reports for this trail, below

The Ruby Mountain trail is only maintained by boots, and is closer to a scramble than a casual stroll on a well-maintained trail. The trail was not officially developed, but unlike most bootpaths, this trail is fairly well-graded. Thanks to the relative popularity of Ruby Mountain, following the trail is doable, but good navigation skills, and a good nose for finding the bootpath are highly recommended.

When the National Park was established in 1968, Ruby Mountain was considered for a viewpoint reachable by a tramway. The tramway was intended to allow all visitors of the North Cascades to appreciate the area. While this would certainly have been a magnificent place to enjoy the scenery, the project was abandoned. Though the project had relatively widespread support, it was delayed due to the high cost. In the meantime, new environmental protection laws had been introduced and the Park Service expected difficulties in complying with this legislation. The cost and the environmental concerns then caused the project to be entirely abandoned. More recently, the Ruby Mountain trail was considered for official maintenance, but an assessment of the impact on the fragile area resulted in a dismissal of this plan as well.

The Ruby Mountain trail is located in the Ross Lake National Recreation Area, which means that it is one of the few trails in this area of the North Cascades that can be hiked with a dog. Good campsites are available at Thunder and Fourth of July Camp, but camping is also possible high on the ridge of Ruby Mountain. The Fourth of July Camp has a permanent water source. On top of Ruby Mountain there is snow available throughout the year on the north-east side. This slope still has some glacial remnants as well. If you plan to camp at the top, make sure to bring enough gas in case melting snow is required.

During the summer, Ruby Mountain is usually accessed from the Thunder Creek trailhead and the Fourth of July Pass. The trailhead is all the way at the back of the Colonial Creek Campground with an elevation of 1200 feet. The first 4 miles are to Fourth of July Pass, which has a separate guide entry with more details. From the trailhead, the long climb starts gently, with a very minor incline on the trail that runs parallel to the impressive Thunder Creek. After crossing the bridge, the trail runs through Thunder campground, then starts climbing a bit more. Soon there is a clearly indicated intersection with the Panther Creek trail at about 1300 feet that leads to the Fourth of July Pass. More serious climbing begins now, with two series of switchbacks, one right after the intersection, and one when approaching the pass. During the climb occasionally nice views open up on Colonial Peak, Snowfield Peak and the Neve Glacier, and Primus Peak. These views only get better while ascending, but the mountains are beautiful enough that the climb is immediately enjoyable. The climb to the pass crosses a few creeks that may run into late summer, depending on the snowpack.

After climbing to 3400 feet, the relatively flat Fourth of July Pass area begins with an intersection of trails to the Fourth of July Camp. This is not the actual pass yet, but the views at this point are the best until much higher on Ruby Mountain. Continue straight towards the pass through a mostly flat, swampy area. This is the point where route-finding is required.

The beginning of the Ruby Mountain trail is not clearly marked, and a bit obscured. Fortunately, there is clear landmark: the top of the pass has two small bridges across creeks, first a small one, and second a bridge about 30 feet long. The Ruby Mountain trail begins right before the larger, second bridge, to the left. It is easily recognizable after hiking a few feet down the trail. After a few dozen yards on the trail there is warning sign that the trail is not maintained.

The first half mile of the Ruby Mountain trail runs through forest with not much undergrowth, and the trail is fairly easy to follow here. The area does have many blowdowns, but the trees are not that big, so they do not present a problem. Make sure to pay attention to hints of the bootpath. If the bootpath is not visible for more than half a minute, then most likely you’ve lost the trail.

At about 4200 feet the trail enters a gully with much more blowdown and less moss, making the trail harder to follow. Pay close attention to hints of the bootpath. At the time of writing, hikers have put single rocks on blowdowns for guidance.

The trail eventually enters more open forest with brushy undergrowth and traverses from the west side to the east side of the ridge at 4900 feet. Due to the undergrowth the trail is easier to follow again here, but it is not very wide and the terrain is fairly steep. Poles come in handy here.

After a long, well-graded ascent on the east side of the ridge, the sensible grade of the trail is suddenly abandoned and the trail climbs fairly steeply through a more rocky area back to the center of the ridge at 5800 feet. This is where views start opening up really nicely, with particularly nice views of the Neve and Boston Glacier.

Continuing on the west side of the ridge, a fairly long traverse without switchbacks climbs to 6200 feet, eventually entering a large slope of blueberry bushes, and starts climbing steeply with switchbacks until 6600 feet. The way is still remarkably well graded for a bootpath. And the views from the meadow are stunning, with the most spectacular views on Mounts Baker and Shuksan, Bacon Peak in the northwest and in the southwest, Forbidden Peak, Boston Peak, Bonanza, Mount Logan, and many more peaks and glaciers.

At 6600 feet a small flat area interrupts the climbing. The terrain becomes more high alpine here and snow lingers deep into the summer. The 7200-foot ridge of Ruby Mountain is visible from this point, with a steep rock and grass slope between you and victory. Unfortunately, the trail mostly disappears here and the remainder of the climb to 7200 feet is a scramble through the rocks. If no snow needs to be crossed, then it is not a dangerous climb, but the slope does feel a bit exposed. A snow-free climb is normally possible half-way through July.

Once you reach the ridge, the fantastic 360 panorama opens up. You can see Jack and Crater Mountain in the northeast, which are particularly beautiful when there is still some snow early in the year. The walk over the ridge has a couple of false summits, but the walk is such a delight that you will wish there were more! Finally, at the peak there is an amazing view of Ross and Diablo Lakes (with strikingly different colors), and virtually every significant peak of the North Cascades. Ruby Mountain has a summit register, and a large radio system used by the rangers of the North Cascades National Park for their operations.

For very strong hikers Ruby Mountain is possible as a day-hike, but enjoying the sunrise and sunset from the mountain is a memorable experience, so an overnight is recommended.

The trailhead is before the point where SR 20 closes for winter, so it is also possible to climb Ruby Mountain in winter or early spring. In winter some prefer a steep, shorter route straight up from SR 20 using the north-west ridge of Ruby Mountain. The route via the Fourth of July Pass is also possible, but it is then better to simply follow the entire southwest ridge up instead of attempt to follow the trail, which traverses some steeper slopes. For more route information on those options please consult snowshoeing or cross-country skiing guides.

No permit or fee is required for entering the Ross Lake National Recreation Area, nor for parking at the trailhead. A free permit is required for backcountry camping, which can be obtained at the Wilderness Information Center in Marblemount. See the National Park Service website for more information on the permits. Dispersed (crosscountry) camping is allowed only on durable surfaces and 1 mile from established campsites.

WTA Pro Tip: An alternative route to the Fourth of July Pass would be to start at the other end of the Panther Creek trail from SR-20, but this trail does run through the National Park, so dogs are not allowed. The approach is also about 1.5 mile longer than the approach via the Thunder Creek.

75 Scrambles in Washington: Classic Routes to the Summits

From Marblemount, follow the North Cascades Highway (SR 20) east for 24 miles. Just past milepost 130 and right before crossing the Thunder Arm of Diablo Lake, turn right into the Colonial Creek Campground. Proceed to the trailhead all the way in the back of the campground. There are clearly indicated parking spots for day-use only.

None
A backcountry permit is required to camp overnight in North Cascades National Park. Call the Wilderness Information Center at (360) 854-7245 the day of or the day before your trip to obtain a permit 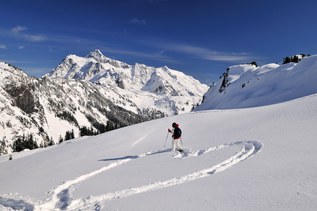