The trail to Lena Lake is a pretty, and popular, weekend destination. But hearty hikers and backpackers who venture to Upper Lena Lake will leave the crowds behind and experience a little bit of nirvana. Continue reading


(31 votes) Log in to rate
Saved to
My Backpack

286 trip reports for this trail

The trail to Lena Lake is a pretty, and popular, weekend destination. But hearty hikers and backpackers who venture to Upper Lena Lake will leave the crowds behind and experience a little bit of nirvana.

Upper Lena Lake sits in a gorgeous alpine meadow with Mount Lena and Mount Bretherton looming overhead. With the views, the flowers and heather, and the lake, you will be glad you expended the effort to climb up here.

The first part of the hike follows the trail to Lena Lake (described in detail in our Hiking Guide). The way trail is usually in good shape and climbs moderately, gaining 1300 feet in three miles. There are 28 established campsites at Lena Lake - and on a sunny summer weekend all of these could be filled.

For more solitude, you should push on - but make sure you get a backcountry permit from Olympic National Park (360) 565-3100) before you hit the trail. You will be crossing into the national park shortly.

As you approach the west side of Lena Lake, the trail to Upper Lena Lake branches off. You can also proceed to the lake and catch a spur trail along Lena Creek that will lead to the trail. Conditions early in the season may be sketchy, with blowdowns to navigate, but most get logged out as the summer progresses.

You will enter Olympic National Park at four miles and cross a creek at 5 miles (be careful during high water!). After this point the trail steepens and becomes rougher until at last you reach Upper Lena Lake. Heather and huckleberry dominate the vegetation and The Brothers dominate the horizon. Make sure you camp only in designated spots - this is a fragile environment!

From Hoodsport travel US 101 north for 14 miles. At milepost 318 turn left (west) onto Hamma Hamma River Road (Forest Road 25). Continue for 7.5 paved miles to the trailhead.

Buy the Green Trails The Brothers No. 168 map 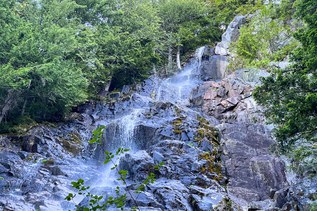