The northeast segment of the Timberline Trail provides the highest point on the trail and exposed moon-like landscapes; the most rugged of the sections of the circumnavigation. Continue reading

The northeast segment of the Timberline Trail provides the highest point on the trail and exposed moon-like landscapes; the most rugged of the sections of the circumnavigation.

From Elk Cove, your next sporty water crossing is Coe Branch at 22.1 miles and 5140 feet which can have two separate flows gliding over a series of boulders before it spills into a thin waterfall. The water is once again silty and fast-moving, backpackers can look across or upstream where the trail continues for a route that feels most comfortable now that you have multiple fords under your belt.

The trail climbs a series of steep, exposed switchbacks and there may be more than a handful of downed trees on the steep slope making for a choice of backpack limbo or saddling over.  The outslope is loose and dusty so diligent steps are prudent.

There are angled side streams of Compass Branch to cross, often on residual snow bridges, before arriving at the faster moving main Compass Branch at 23 miles and 5880 feet.  This is the first of several crossings where one (or both) of the banks are severely eroded and it can be difficult to tell where the trail takes up on the other side. The Compass is relatively clear and makes for a good stop for resupplying water stores and there are a couple of nice campsites on either side.

The Timberline Trail continues around the contour until popping out on a ridge above Eliot Creek at 25.3 miles and 6000 feet.  Gaze down first into the gaping canyon and then across at Cloud Cap Resort perched high up on the following ridge.  Look upstream and you can see where the old "new" trail used to be but Mother Nature had other plans. Retreat of the Eliot Glacier is destabilizing the moraine, making established trails and bridges a losing enterprise.

The trail now cuts a stack of switchbacks on the west side of the moraine, dropping you down and curving around to the east side before spitting you out at a ledge about 75 feet above the Eliot Creek itself.  It might not be clear at first how to get down to the water level as it will all be loose scree and boulders.  Any given footstep could dislodge a rock large enough to break an ankle or simply drag you down with it.  There are usually enough hikers passing through that there may be a faint route to follow, often those below at the water’s edge will point you in the right direction.

Take your own turn to stand at the water's edge and assess the swift flowing Eliot at 26 miles and 5430 feet.  Hikers on the other side may point to where they have forded across, just tell yourself if they can do it, so can you. The pull of the water can be even stronger underneath, you will want sturdy shoes strapped on and poles. Face upstream and create a triangle and you will soon be on the other side!

Sit in the warm sun and savor your victory as you have another exposed climb until the trail levels out at 5900 feet elevation.  The Cloud Cap primitive campground complete with picnic tables, running water and privy is found at 27.2 miles and 5850 feet. You can debate a stay here or travel half mile further on the Tilly Jane Trail #600A to the slightly more secluded Tilly Jane primitive campground with its unmanned ranger station, privy and access to Tilly Jane Creek.

From Cloud Cap the Timberline continues up 1 mile, crossing Tilly Jane Creek and arriving at a junction below the Copper Spur Trail at 28.3 miles and 6630 feet. It is .1 miles up to the Copper Spur shelter which doesn’t offer much space inside but there are several campsites nestled in the alpine shrub and boulders surrounding it with a close-up Mount Hood backdrop.

From this junction, the Timberline Trail moves into moonscape that meanders up and around the mountain's ridges and swales with tall rockpile cairns and weathered gray posts to mark the way.  The worn wood of the markers is a reminder of how harsh the conditions can be in poor weather when visibility is low and you are above the treeline without natural waypoints to guide you.

You arrive at the highpoint of the Timberline Trail and Oregon State itself at 29.6 miles and 7340 feet of elevation. If you didn’t stop at the Copper Spur Shelter, this makes for a good spot to soak in the scenery and drink some more water.  Mount Rainier, Mount St. Helens, and Mount Adams can be spotted on the horizon to the north. A few snowmelt streams may be found in this section earlier in the season and some ridges hold compact, level space for tents but little protection from the elements.

Several sparsely pine-covered ridges and snowfields later, you will cross a clear stream and more covered campsites nestled down from the trail before coming out at the saddle of Gnarl Ridge at 30.3 and 6940 feet.  Prepare to have your breath taken away, this is the most rugged and otherworldly perspective of the mountain to be found, where a number of glacial remnants remain and volcanic activity continues.

Just up from the saddle as you begin your trek along the ridge is another stunning overlook at 28.9 miles and 6930 feet. Views of Mount Jefferson and South Sister to the south and the tributary to Newton Creek cascading into the uncommon medial moraine of the Newton Clark Glacier. Give yourself some time to observe near the summit, you may see vents on Mount Hood’s upper flanks that still emit sulfurous steam. A flat area for a few tents can be found, a little more sheltered than the Timberline High Point.

It is now a slow descent along the Gnarl Ridge to another saddle where the trail drops down to the east side to negotiate Lamberson Butte, a scraggly scramble if you have the energy and time.  There are more than a handful of places where tents can be pitched in the cover of short, wind shaped trees but based on the condition of said pines, they are likely to offer little protection from the wind or rain.

Shortly after passing the collapsed rubble of the Gnarl stone shelter, you are back into the cover of forest again. There are durable campsites to be found in the trees and the occasional field of wildflowers.  At 32.3 miles and 5680 feet, you pass the junction with the Gnarl Ridge Trail (#652) and turn right for your final section of the Timberline Trail.

To start from the Elk Cove Trailhead, take I-84 E from Portland. Take exit 64 and turn right onto OR-35 S. Continue on OR-35 S for 13 miles. Turn right onto OR-281 N, and continue straight for almost 3 miles. Turn right onto Culbertson Drive, then immediately turn left onto Clear Creek Road. Continue straight for almost 2 miles, then take the left fork onto Laurance Lake Road. Stay on Laurance Lake Road for just over 4 miles, then turn left onto NF-2840. In about a mile, the short road to the trailhead will be on the left.

Around & About Mount Hood by Sonia Buist with Emily Keller 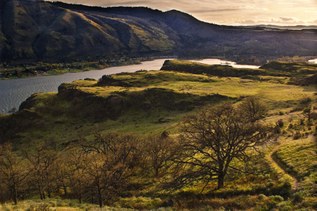