Washington Trails Association has been working all over the state for more than 20 years. We take pride in each work party, but some trail projects have required a little more sticktoitiveness than others. These are our signature projects; projects in places that we've worked many times, or where we worked hard to create or improve a trail that hikers will be able to use for generations to come.

In addition to the ten signature projects that we've highlighted here, WTA volunteers have also worked along the iconic Pacific Crest Trail. Since 1993, we've worked on the trail at more than 50 locations between Washington's southern border on the Columbia River and Holman Pass, just 13 miles from the Canadian border.

Take a look and see where we've worked near you, then get out there and see how the trail looks!

Volunteer crews worked the Grand Ridge trail section-by-section, switchback-by-switchback, work party-by-work party, over 11 years , culminating with the completion of a 600-foot boardwalk in 2012. The trail is designed to carry hikers, bikers and equestrians 7 miles from I-90 near Issaquah to Duthie Hill Park, providing a much-needed hiking opportunity close to a growing urban area.

Begun in 2001, Grand Ridge quickly became WTA’s baby. Due to its frontcountry, typically snow-free location, WTA crews were able to work on Grand Ridge year-round, when most other trail projects were inaccessible. Year after year, crews worked their way north, gaining skills that were put to the test with two final projects: a 40-foot, five foot wide bridge built entirely on-site and the long puncheon (boardwalk) through wetlands at the north end.

The Glacier Basin trail has long been one of Mount Rainier National Park’s most popular trails. Unfortunately, it has also been subject to the whims of the Inter-Fork of the White River. During fall 2006, severe floods decimated significant portions of the lower trail. Rather than repair the damage, park authorities opted to build a new trail — one that would not be subject to the river’s frequent flooding.

A replacement trail, carved into the mountainside high above the river, required a herculean effort. Over four summers WTA led 121 single day work parties and six volunteer vacations at Glacier Basin. More than 400 individuals spent more than 17,450 hours constructing this trail. A true feather in WTA's cap, this new trail is a broad, winding route with smooth tread and beautiful rock walls. Built to the highest standards, it will be around for a long time to come.

WTA’s youth program today owes its existence to a group of pioneering young adults. The three-tiered waterfall has always been an attraction, but in 2002 the park hatched a plan with WTA to build a new trail to Wallace Lake. The first shovel of duff was thrown that summer, followed by a series of day trips. Then groups of youth volunteers from national programs spent the summer building the first third of the trail.

It was so successful that the next year WTA created a formal summer youth program at Wallace Falls. Funded largely by the Spring Trust for Trails, the youth program's energy and enthusiasm breathed new life into an overgrown forest.

With layers and layers of duff, this was not an easy trail to build! With the effort of 23,000 hours of volunteer labor (20,000 from youth crews), a beautifully constructed trail emerged. In August 2006, a gleeful group of volunteers cut the ribbon on the Greg Ball Trail, named for the late Greg Ball, who spearheaded the project for WTA.

A group shot from a past Chelan Lakeshore trip. Photo by WTA staff.

If there is one trail that WTA has "adopted" over the years, it's the Chelan Lakeshore Trail. to date, WTA has tallied 35 weeks of volunteer vacations there over 13 years, with more trips planned for the future. It’s the perfect spring break for WTA’s volunteers. They get to do something they love in a stunning location along Lake Chelan.

This 17-mile trail hugs the shore of Lake Chelan and is accessible by boat, making it an incredibly distinctive hike. But it was a trail that was almost lost. Being in a remote location, it was extremely difficult for the Forest Service to maintain. In 2001, and then again in 2006, forest fires ravaged the area. WTA volunteers took on hundreds of downed trees, reopening the trail and clearing side trails as well. They have worked every foot of the 13.5 miles, clearing burned and windblown trees, fixing drainages, brushing and doing treadwork.

After the infamous floods of 2006 washed out part of the West Fork Foss River Trail, it seemed likely that this section of the Alpine Lakes Wilderness might become permanently inaccessible. A log bridge near the trailhead was constantly washing out, and the trail itself sometimes became a channel of the river. So when WTA appeared on the scene thanks to funding from the Spring Trust for Trails, the hiking community breathed a collective sigh of relief.

In the summer of 2010, WTA crews set to work rebuilding a new section of trail. Youth and adult crews alike unearthed duff and heaved rocks and gravel onto the new trail bed, and in August of 2011, the reroute was completed. A popular high country expedition, this smooth-treaded trail will undoubtedly be leading hikers into the heart of the wilderness for years to come, thanks to WTA volunteers. 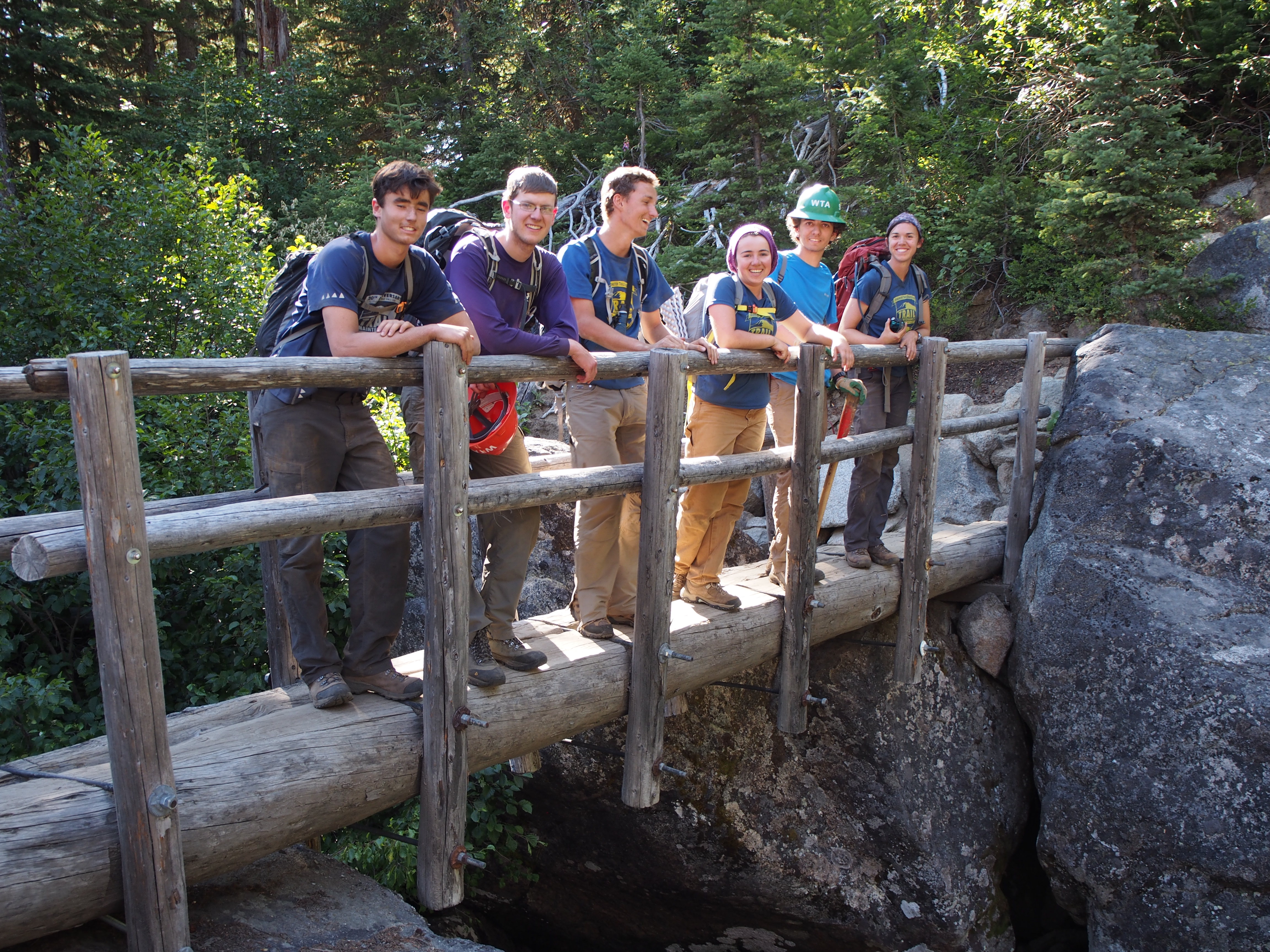 A youth group hiking into Colchuck Lake for a weeklong trip. Photo by Megan MacKenzie.

Hikers flock to the dramatic peaks of the Enchantments every year, and all those boot prints take a toll on the landscape. That's why WTA has been keeping trails to the high country of the Enchantments open and designated to limit the impact on those backcountry spaces. WTA crews in the early 2000s built tall, sturdy cairns up to Aasgard Pass and rock steps around Leprechaun Lake to keep hikers on a specific route.

To ensure access into this spectacular area, WTA volunteers have also worked to keep the entry points to the Enchantments open and hikable. They've maintained the Stuart Lake Trail, built rock steps on the trail up to Colchuck Lake and, in recent years, built end-to-end puncheon over boggy areas near upper Snow Lake. Because of these volunteer efforts, hikers for years to come will be able to access the beauty of the Enchantments with limited impact on the land.

Celebrating with post-work soft drinks at the trailhead. Photo by Charlie Romine.

This ancient route into the heart of the Olympics would have been abandoned if WTA volunteers hadn’t stepped up to give it a makeover in the late 1990s. The trail, an old Native American route through old-growth thickets, goes up and over Quilcene Ridge, descending to Townsend Creek.

In an effort to keep the history of this trail alive, WTA volunteers set to work to revive it in 1998. Since then, they have held 67 work parties – several days every year – gradually opening it up and restoring access to this part of the Olympics. They fixed the tread, rebuilding the trail in places where it had totally eroded, and built three new bridges on different sections of trail. And the work on Notch Pass continues. In spring of 2013, volunteers logged out significant portions of the trail to open it up to hikers.

WTA's first significant trail work in Eastern Washington was in the Little Pend Oreille National Wildlife Refuge in 2007. The open ponderosa pine forest that sprawls across this landscape is home to elk, moose, and other animals. Boasting such an abundance of wildlife, the refuge wanted to increase access to this natural area, and so they turned to WTA.

Between 2007 and 2010, WTA hosted a number of weeklong trips. These volunteers have not only increased hikers' access to this beautiful part of the Colville, they've also expanded WTA's reach to the far eastern part of Washington state, with an opportunity for adults and youth to construct the Mill Butte Trail.

Over the course of a few years, WTA volunteers built 4 miles of tread, weaving through forest and grasslands with views over the surrounding countryside. More recently, volunteers have also constructed the new half-mile Beaver Pond Loop.

Turnpike work on the Beacon Rock trail back in 2010. Photo by WTA staff.

WTA has long sought to protect safe access to the area around this iconic basalt outcrop in southwest Washington. As early as 2005, WTA crews were logging out and fixing drainage on the Hardy Ridge Trail, which traverses old logging roads and provides broad vistas out to the Columbia River Gorge. Between 2009 and 2012, WTA volunteers also built the brand-new mile-long "Bridge Trail" that connects the Hardy Ridge and Hardy Creek Trails so that hikers can extend their routes.

Recently, several crews of hardy youth volunteers have been working on constructing the new Moorage to Rock Trail, which transports hikers to Beacon Rock through woods rather than along the narrow highway. Over the years, WTA volunteers have ventured out on more than 150 work parties - both day trips and weeklongs - to make the network of trails around this state park both safe and accessible.