Skip to content
20 Days on Mineral Creek: Revitalizing a Route to the PCT Tucked into a quiet trailhead outside of Salmon La Sac is the Mineral Creek Trail — a steep yet rewarding route straight into the heart of the Alpine Lakes Wilderness. It was in pretty rough shape — so we sent our Lost Trails Found crews in to give it a glow up. https://www.wta.org/news/signpost/20-days-on-mineral-creek https://www.wta.org/news/signpost/20-days-on-mineral-creek/@@download/image/20220805_194735.jpg

20 Days on Mineral Creek: Revitalizing a Route to the PCT

Tucked into a quiet trailhead outside of Salmon La Sac is the Mineral Creek Trail — a steep yet rewarding route straight into the heart of the Alpine Lakes Wilderness. It was in pretty rough shape — so we sent our Lost Trails Found crews in to give it a glow up.

Tucked into a quiet trailhead outside of Salmon La Sac is the Mineral Creek Trail — a steep yet rewarding route straight into the heart of the Alpine Lakes Wilderness. At only 5 miles, Mineral Creek is one of the quickest access points to the Pacific Crest Trail (PCT) near I-90 and it makes for a great first-time backpacking trip. Though Park Lakes are technically the endpoint of Mineral Creek — and a worthy destination in their own right — it's just the beginning of a series of alpine lakes and rocky peaks accessible from the trail. Link up with the PCT southbound to feast your eyes on Joe or Alaska lakes, or head northbound to dip your toes in Spectacle Lake. 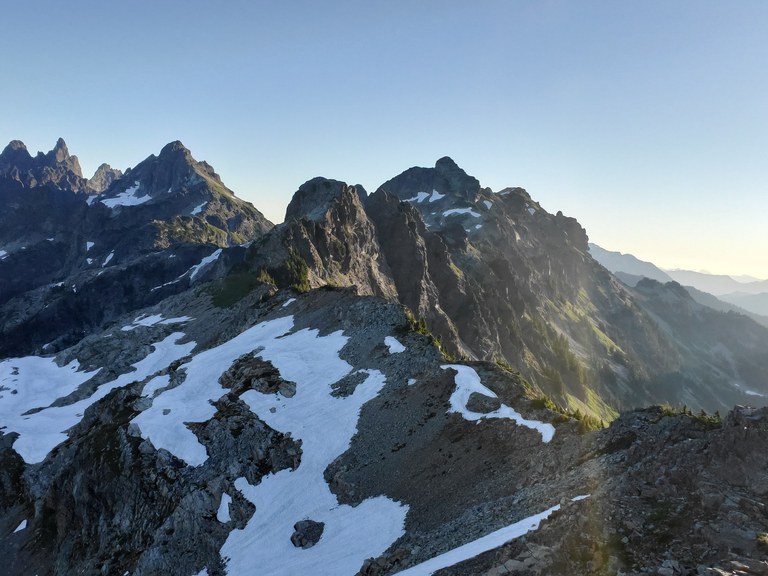 Some of the peaks reachable from Mineral Creek. Photo by Zack Sklar.

Despite being a great route, Mineral Creek hasn't been receiving the same amount of maintenance as its popular neighbors like Pete Lake or Waptus River. Forest Service budgets are stretched thin, and trail work on lesser used locations can get pushed to the back burner. This summer, however, extra funds from the Great American Outdoors Act meant that Mineral Creek could finally get its moment in the sun.

WTA worked with the Okanogan-Wenatchee National Forest to send our Lost Trails Found crews on three separate trips along Mineral Creek, addressing many of the issues we had seen crop up in trip reports over the last several years — steep side slope, fallen trees, and way, way too much brush.

“The trail is overtaken by vegetation most of the time. You do not know where you put your feet and sometimes have to wonder which way is which," said trip reporter HugoJulesFx during a July trip last summer. "Your pace will be much slower than usual and that got us at the bottom of the lakes later than we had thought. We lost the trail at the third river crossing and could not find it again.”

Despite the trail damage mentioned throughout trip reports, they all had another thing in common — awe of the destination. In the summer, hikers enjoy a dip in the quiet, shimmering waters while soaking in views of the nearby peaks — Hibox, Alta and more. When fall set in, hikers feast on bountiful berries as the surrounding basin ignites with golden and red hues.

Throughout July and early August, our crews worked across the entire trail, fixing up a myriad of different issues — brushing being the biggest project. The crews worked on heavy brushing over more than 3 miles, cutting back slide alder and vine maple that had been severely encroaching on the trail corridor and removing 47 fallen trees. 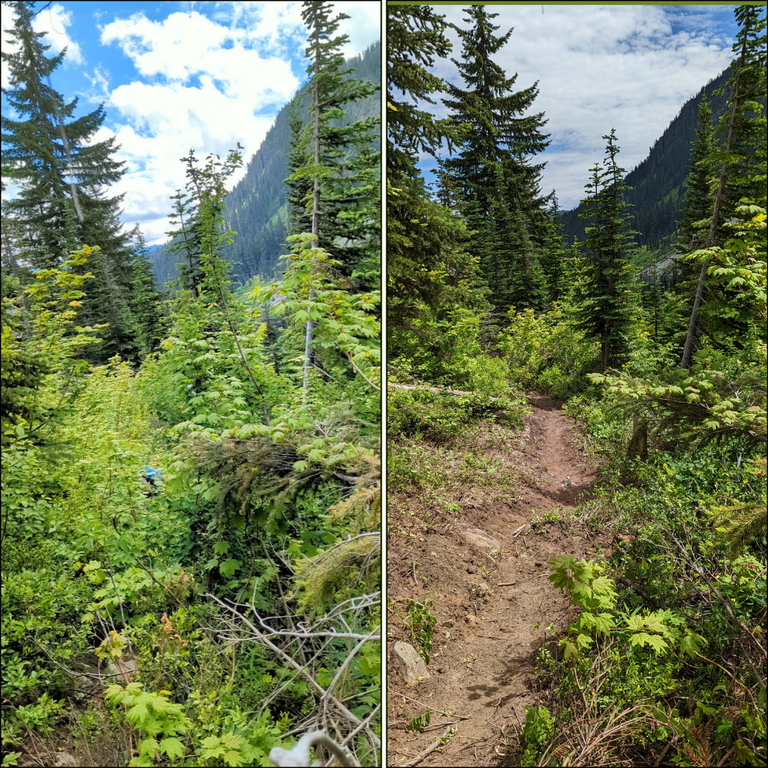 Before and after a stretch of brushing on Mineral Creek. Photos by Zachary Toliver.

To help keep the tread (the trail surface that we hike on) in good shape for the future, the crews also focused on several water-diverting fixes like digging drain dips, installing check steps (partially submerged logs that run perpendicular to the trail tread to slow down water) and diverting away a small stream that had been running down the trail. Rain and water runoff is the main contributor to trail washouts and erosion, so it's important to keep water at bay. 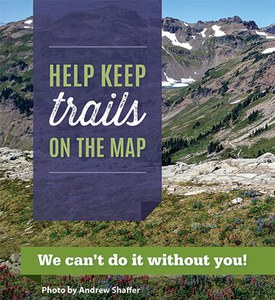 In the final push to the lake basin, sections of the trail had become out sloped (the trail tread angled steeply downhill rather than flat) and were putting hikers at risk for a painful slip or twisted ankle. The crews also helped to remedy some of those issues by cutting into the backslope and evening out that tread.

The difference was massive — not only was the trail more enjoyable to hikers this summer, but these improvements will hopefully be enjoyed for years to come. Several groups of day hikers and backpackers passed by our crews as they worked, and the impact of their maintenance was immediately apparent.

Trip reporter Jill C planned a backpacking trip to Park Lakes with a large family of middle- and high-school students and caught our final crew heading in to complete the last stretch.

"We hiked up the Mineral Creek Trail and camped at Upper Park Lake for three nights. We were so grateful for the work of the WTA trail crew! The first four miles of trail were well-maintained — cleared of brush, good tread, etc. The last mile and a half of the trail was harder but manageable (some blowdowns, brushy)," they wrote. "As we came out on August 3, we saw another WTA trail crew headed in. They were planning to finish that last mile and a half of trail to upper Park Lake in the coming week and a half, so if you are reading this trail report any time after August 12, 2022, you can expect the trail all the way to Park Lake to be a good, well-maintained trail. Thanks, WTA!" 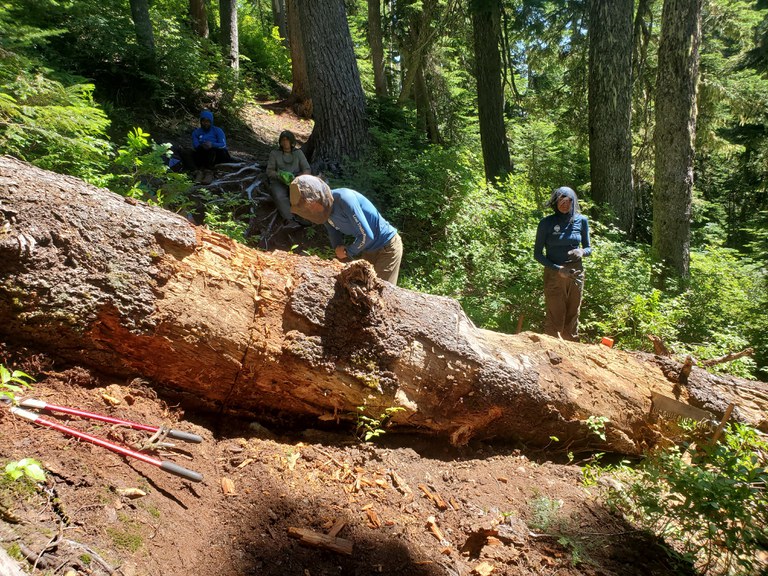 The crew sawing out one of several large trees that had fallen across the trail. Photo by Zack Sklar.

Mineral Creek is one of many trails our Lost Trails Found crews have been working on this summer — and there are more to come! The addition of a second professional crew has allowed us to visit more regions of the state and tackle twice as many trails. Keep up with the latest on all of our lost trails work and find out how you can help support it at wta.org/losttrails.

PNWRich on 20 Days on Mineral Creek: Revitalizing a Route to the PCT

Can confirm the trail is amazing!