Skip to content
Building More Than Trails in the Columbia River Gorge How WTA and our partners are shaping the future of the Columbia River Gorge. https://www.wta.org/news/signpost/building-more-than-trails https://www.wta.org/news/signpost/building-more-than-trails/@@download/image/a5700d85-79ce-4cf6-adcf-ed727cce2ba7.jpeg

Building More Than Trails in the Columbia River Gorge

How WTA and our partners are shaping the future of the Columbia River Gorge.

In spring, there are few places more idyllic than the Columbia River Gorge. The river rolls by beneath wildflower-dotted mountains that promise adventure, their broad slopes and folded valleys beckoning hikers. It seems like you could wander into those hills and emerge days later and miles away from where you started, yet still in the same landscape.

And to some extent, you can. There are hundreds of miles of trail in the Columbia River Gorge, and whether you want a day hike or a dayslong ramble, there’s something here for you.

But the sheer existence of these trails shouldn’t be taken for granted. It’s thanks to years of efforts by individuals, organizations and agencies that these trails are here to be enjoyed. 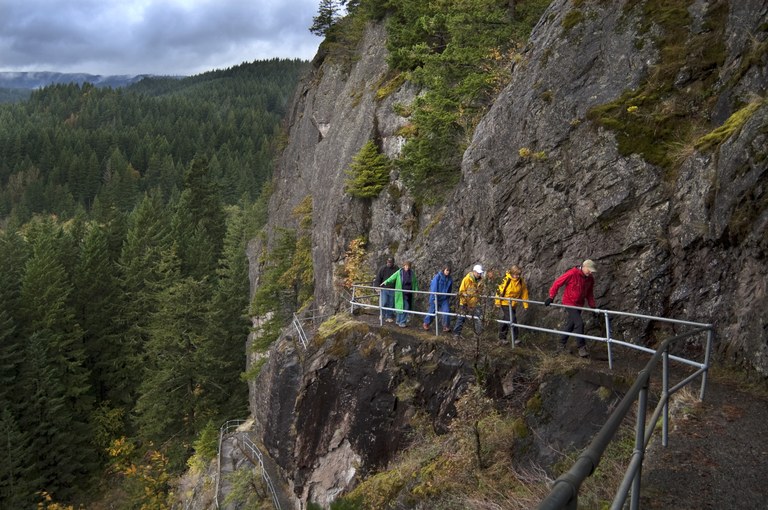 The Gorge offers hikers miles of adventurous hiking thanks to its extensive trail network, including Beacon Rock State Park. Photo by Ken Trimpe.

For more than 25 years, WTA has been one of the key players in the Columbia River Gorge, connecting people to the trails they love. WTA’s first trails advocate here was Susan Saul. She was an early member of WTA’s board, but she’d been speaking up for trails well before that. In fact, she was instrumental in getting Mount St. Helens protected as a national monument in 1982. Because of her experience in protecting land, Susan was a key advisor to Nancy Russell of Friends of the Columbia Gorge when Nancy was working on establishing the Gorge as a national scenic area. That bill went through in 1986; the improvement of the area’s trail system would follow.

By 1993, Susan had joined WTA’s board, and in 2006 she and WTA Executive Director Elizabeth Lunney decided that a dedicated staff person in Southwest Washington could help unite user groups to create a strong voice for local trails. Kindra Ramos, director of communication and outreach, remembers what else influenced the decision.

“We’d always had strong advocates and volunteers there,” Kindra said. “As we were working toward strengthening our efforts across the state, Southwest Washington felt like the right place to invest.”

Susan and Elizabeth developed the southwest regional manager position, which was tasked in part with building relationships with land managers and other stewardship organizations in Washington and Oregon. In the fall of 2008, WTA hired Ryan Ojerio. He is still with us today. 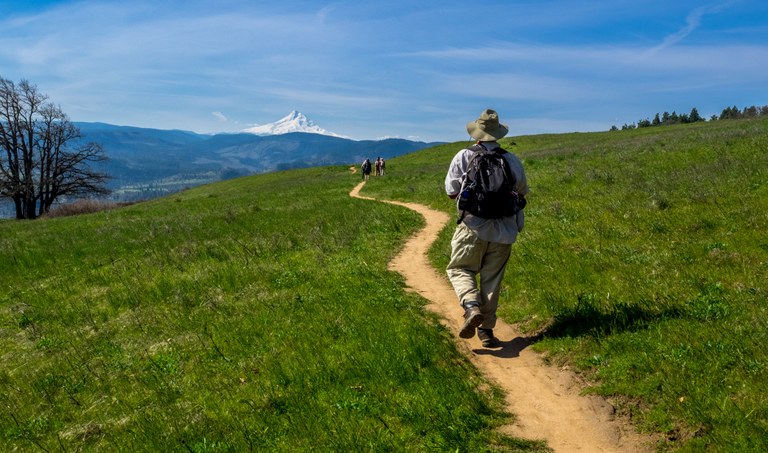 Trails in the Gorge have something to fascinate hikers year round. Photo by Claudio Bernstein.

“One of the first things I did in the new job was attend that year’s Washington State Trails Conference. I was supposed to connect with some potential partners there. It’s kind of a funny story how I met them:

A few of us went salsa dancing one evening, and Renee Tkach from Friends of the Columbia Gorge and Dana Hendricks from the Pacific Crest Trail Association were in the group.”

WTA has worked with both organizations ever since, from laying out potential trail routes to co-teaching at Trail Skills College. This annual event is hosted by PCTA and offers trail maintenance skills courses taught by WTA, PCTA and Trailkeepers of Oregon (TKO), another organization Ryan was asked to make contact with early on.

“Elizabeth told me making a connection with TKO was really important,” Ryan said. “It was built into my work plan that first year to be on their board, but I wound up serving for 2 years.”

TKO had a budding volunteer trail maintenance program in 2008 and hoped to develop it further. They asked Ryan for advice. Part of WTA’s success came from setting clear expectations of our crew leaders, so Ryan took WTA’s crew leader manual and adapted it for the TKO model.

TKO is still a strong partner of WTA’s. In fact, some of our crew leaders also volunteer with TKO. 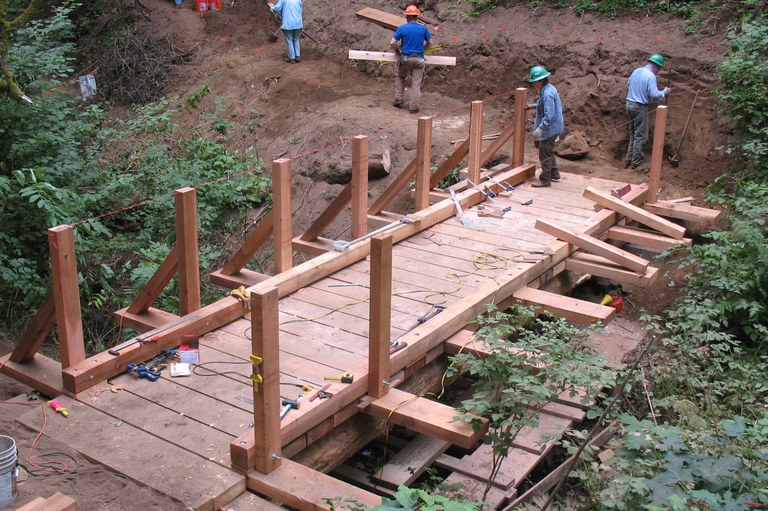 Planning for the future

WTA’s partnerships with TKO and PCTA mean we have a big volunteer base to draw on when it’s time to put tools in the dirt. But sustainable trails start well before the first work party. A healthy trail network begins by laying out a sustainable route that will stand the test of time.

WTA has long focused on creating sustainable trails; our work on the Coyote Wall and Catherine Creek Recreation Plan illustrates that dedication. In the late 1980s, the U.S. Forest Service was planning how to manage this extremely popular, but largely unregulated, area. Susan Saul attended public meetings, ensuring that hiker voices were considered as the Forest Service thought about how to develop a trail system there.

The trails plan that came out of that process makes the area a hiker’s delight, one that’s extremely popular in the spring. In fact, work in this area continues to this day in order to meet the need of the thousands of hikers who flock there each year. This summer, WTA is hosting a volunteer vacation at Catherine Creek, during which we’ll build a bridge and cut new trail to better accommodate the increased visitation.

We’ve collaborated in making other areas sustainable too. Early on, Ryan helped make one of the Gorge’s most popular routes — the Cape Horn Trail — a reality.

“Cape Horn was a user trail that Cape Horn Conservancy was considering adopting, and they asked for our support,” Ryan said. 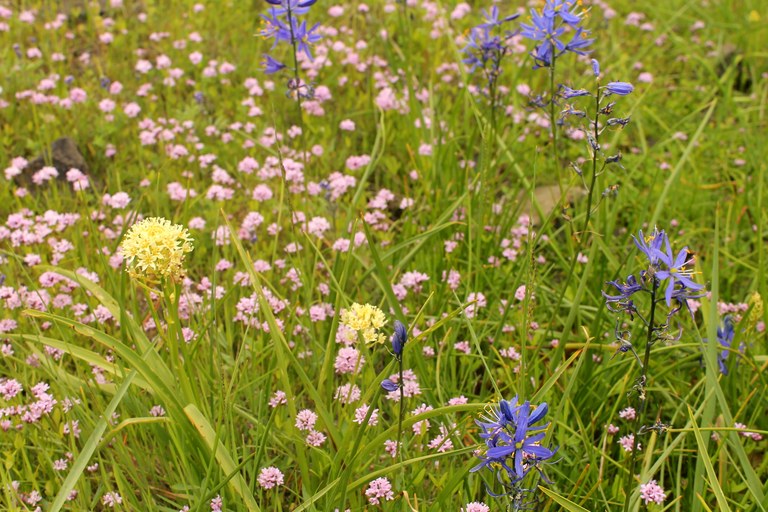 “We did a ton of work on rerouting,” Ryan said. “We also got a National Forest Foundation grant to build a bridge, and we did maintenance and joint work parties with the Cape Horn Conservancy as they were getting their program going.”

These days, the Cape Horn Trail is one of the most popular in the Gorge. The loop skirts a waterfall and passes several dramatic viewpoints. Peregrine falcons that nest on the cliffs require the Forest Service to close a section of the loop during their nesting season, but the section that is open year round is still an excellent out-and-back hike.

As interest in getting outside increases and funding decreases, it’s important to consider how hikers get to the trails that connect them with the landscape. Some of Washington’s most popular trails lie along the Gorge’s Highway 14. That means full (or overflowing) parking lots, and on narrow Highway 14, this can affect through traffic.

One parking area that is particularly difficult for the Forest Service to manage is Dog Mountain, a hiker magnet in spring when the balsamroot blooms. To address the traffic concerns, Skamania County, along with our partners at Friends of the Columbia Gorge, created the Dog Mountain shuttle. This service utilizes the already-existing West End Transit bus and helps hikers connect with this popular location while lowering their impact. Ryan has thought about how this might expand to other trailheads in the future.

“We should be thinking long term about trailhead development in such a way as to accommodate bus transit,” he said. 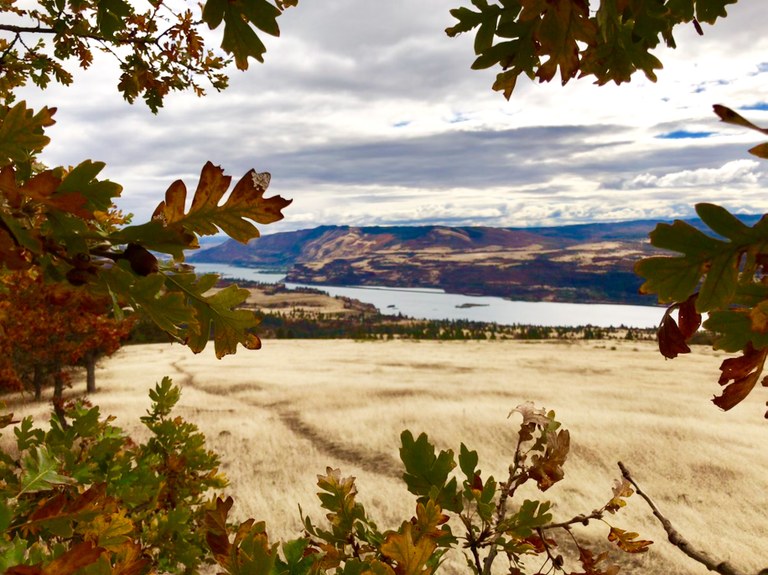 The Gorge is a magical place to visit no matter the season. Photo by Rex Harold.

The vision is for a destination trekking network encircling the Columbia Gorge, connecting communities, rural areas and wilderness trails. Included in that vision is the creation of new trails beyond heavily impacted visitor areas and a car-free transportation system to Gorge trailheads. Renee Tkach notes that the best path to success is through collaboration.

“We’ve learned that progress isn’t just about buying lands and building new trails. It’s about collaboration, a space for commonality and creating a vision that communities want to get behind and champion. Gorge Towns to Trails has proven to be a project that has brought all of these opportunities together and has strengthened our conservation efforts and gains in the region.”

The last 25 years prove that WTA and our partners can create the future we want in the Gorge. The key is connecting passionate hikers with each other and the trails they love.

This article originally appeared in the May 2019 issue of Washington Trails magazine. Support trails as a member of WTA to get your one-year subscription to the magazine.