Skip to content
Celebrating Partnership: WTA and King County Parks On Monday, WTA staff joined King County Executive Dow Constantine for a hike on the Margaret’s Way trail. The trail is a strong example of what can happen when a government agency like King County Parks teams up with a non-profit organization like WTA. https://www.wta.org/news/signpost/celebrating-partnership-wta-and-king-county-parks https://www.wta.org/news/signpost/celebrating-partnership-wta-and-king-county-parks/@@download/image/4E9K-Kbx.jpg

On Monday, WTA staff joined King County Executive Dow Constantine for a hike on the Margaret’s Way trail. The trail is a strong example of what can happen when a government agency like King County Parks teams up with a non-profit organization like WTA.

This particular hike serves as a physical manifestation of what can happen when a government agency like King County teams up with a nonprofit organization like WTA. Washington Trails Association started working with King County in the mid-90s as we established our volunteer trail-maintenance program. This partnership has grown stronger over time. Last year, WTA hosted 147 work parties at 10 different King County Parks. In addition to our trailwork, King County and WTA have worked closely on hiker education issues, reducing barriers to the outdoors via Trailhead Direct and finding ways to invest in trails such as the King County Parks levy.

"What started two decades ago as a small WTA-King County collaboration has grown into one of our most important trail maintenance partnerships," Simmons said. "Working together, we help thousands of volunteers build and maintain sustainable trails so that our local green spaces can be enjoyed by all."

Without this longstanding partnership, Monday’s hike couldn’t have happened because the Margaret's Way trail itself wouldn’t even exist. 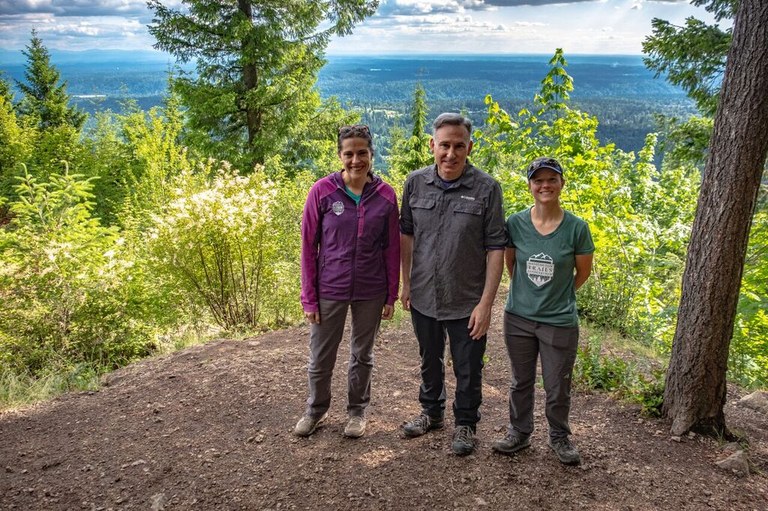 A CASE STUDY IN COLLABORATION

“Washington Trails Association is the nation’s premier advocacy group for hikers, and they’ve been a strong partner here in King County,” said Executive Constantine. “They helped us build many of the trails that 2.25 million people who live here enjoy, including Margaret’s Way.”

In 2014, King County purchased a 226-acre parcel of privately-owned land that was slated to be sold to a logging company. This land, in part, became the new Margaret’s Way trail.

WTA teamed up with partners at King County Parks and the Issaquah Alps Trails Club to build the trail. WTA alone put in 8,655 hours of trail work in 2014 and 2015, and the trail officially opened in summer 2015.

As a bonus, hikers can reach the Margaret’s Way trailhead via Trailhead Direct, which is in its final pilot year. WTA hopes to see the program become a permanent fixture in King County. Hikers can do an out and back trek or, with enough advanced preparation and a map, create a more advanced loop hike with Margaret’s Way as the start or end point. The trail connects to a handful of loops and short trails in the Cougar/Squak Mountain corridor.

King County's trails provide an escape to nature that’s both close to urban living and accessible by public transit (including Trailhead Direct). And because they are usually in the lower elevation foothills, these trails tend to remain mostly snow-free all winter, making them a great choice all year. 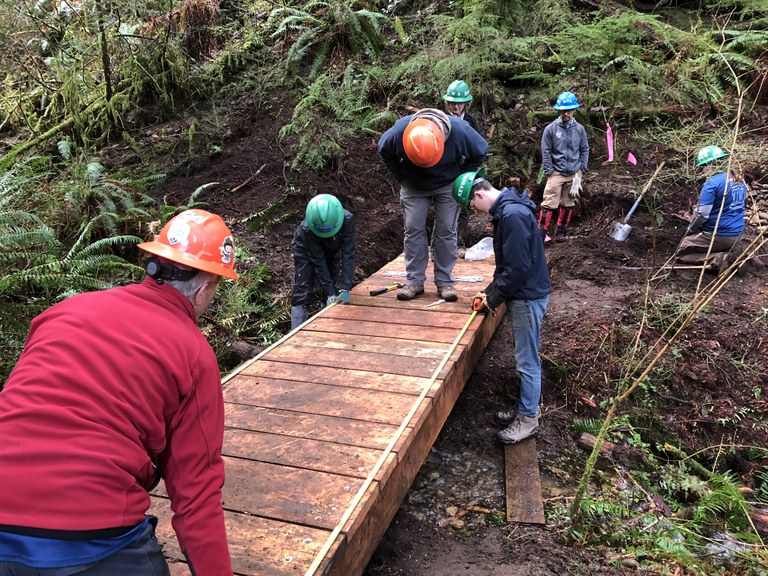 Volunteers build a puncheon on the Chybinski Loop trail in 2018.

WTA believes that it is vital to invest in trail systems that meet the growing needs of hikers, today and into the future. That is one reason why the WTA and KCP partnership is so important to hikers in the central Puget Sound-region. In the “off-seasons” for trail maintenance (fall, winter and early spring), WTA works with KCP to run around 160 work parties each year. WTA volunteers work in just about every King County Park that features soft-surface trails.

Each district within King County gets approximately equal parts of WTA’s contract time with Parks, with local managers for KCP selecting what priority parks and projects they want WTA to work on. 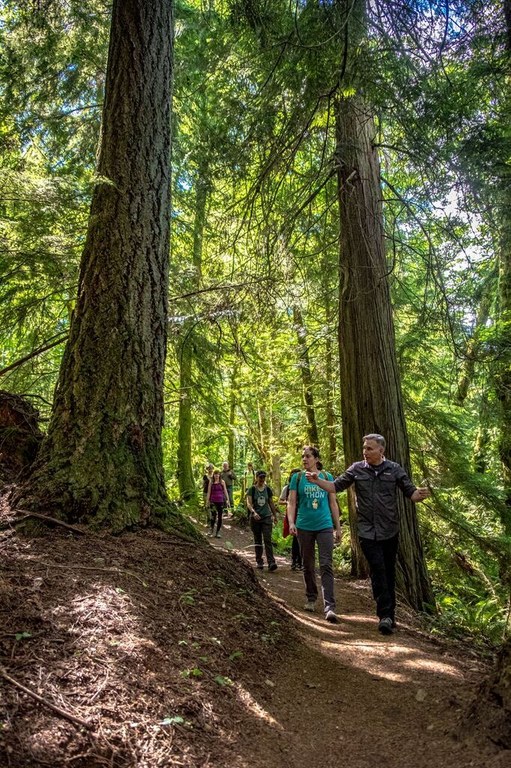 In recent years, WTA has had a huge hand in projects like Margaret’s Way, Grand Ridge's Water Tower Loop and the Chybinski Loop, a trail on Squak and Cougar Mountains.

Within the last two months, a loop trail at the Maury Island Marine Park on Vashon Island opened, the first step in a larger planned project — an islandwide network of trails for hikers, bikers and equestrians. WTA teamed up with Vashon-Maury Island Land Trust and KCP for this project, the first time they all have collaborated on a project at the marine park.

You can learn about other King County parks and trails by following along as Executive Constantine travels 100 miles in 100 days through King County Parks. 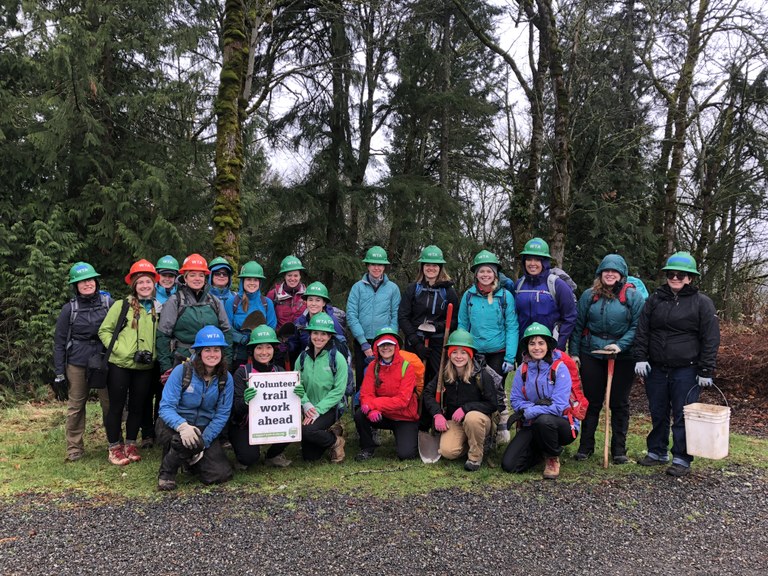 Work parties at King County Parks are some of the easiest to get from the greater Seattle region. Pictured here is a group from PNW Outdoor Women before heading out to work the Grand Ridge trail (located on King County land) in Issaquah.

Because WTA staff and volunteers spend thousands of hours yearly working on King County Parks, it’s only natural that reciprocal relationships develop. KCP staff are often instructors at WTA’s Crew Leader College and are friends with many of the volunteers at trail work parties. A reliable agency partner, they often are able to help WTA respond to unforeseen issues throughout the season, like finding a spot last minute when a work party has to be moved to a new location.

On August 6, the King County "Parks for All Prop 1" (also known as the King County Parks Levy) will be up for a vote. Prop 1 would generate an estimated $810 million over six years for the county’s 200 parks, 175 miles of regional trails and 28,000 acres of open space, in addition to funding more accessible trails. The current parks levy, approved by voters in 2013, expires at the end of 2019. WTA strongly endorses the levy. Stay tuned for more in the coming weeks to learn more about the myriad ways hikers benefit from the levy.