Skip to content
Head in the Clouds: A Weekend Volunteering at Green Mountain Lookout This season, the popular Green Mountain Lookout is open on select days. Here's what it was like for the first round of volunteers who recently staffed it. https://www.wta.org/news/signpost/head-in-the-clouds-a-weekend-at-green-mountain-lookout https://www.wta.org/news/signpost/head-in-the-clouds-a-weekend-at-green-mountain-lookout/@@download/image/main.jpg

Head in the Clouds: A Weekend Volunteering at Green Mountain Lookout

This season, the popular Green Mountain Lookout is open on select days. Here's what it was like for the first round of volunteers who recently staffed it.

I looked up. The lone hiker who'd called out seemed to have materialized out of grey cloud, which was about all I'd seen for the four miles I'd been hiking from the car. The lookout we were headed for certainly wasn't visible.

Despite being so close to the top, my hiking partner, Cory, and I stopped and chatted with this guy, the sixth person we'd seen that morning. It was misty and drizzling, and the popular views that so many people endure merciless elevation gain to achieve were nowhere in sight. He said he was disappointed to miss the view, but had made good time up from the trailhead. 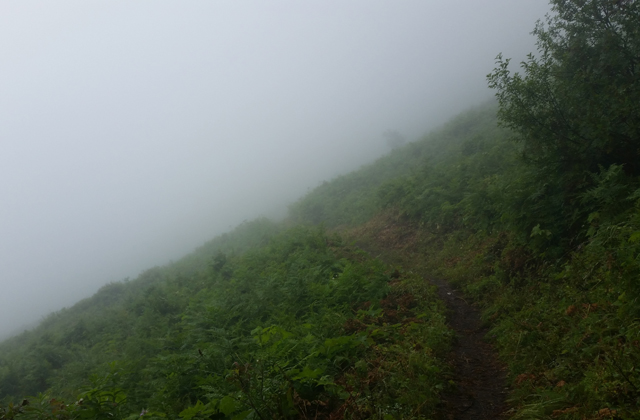 The view for most of the hike up on Friday. Photo by Loren Drummond.

We said goodbye to the hiker, who was thinking about returning on Sunday for the views, and completed the last 100 feet to the summit. I fished out the keys to the padlocks that keep Green Mountain Lookout sealed up for most of the year. Cory held a shutter panel open while I unlocked the door. Inside, hundreds of ladybugs and a handful of crickets greeted us.

We were home for the weekend.

Camping in the sky

The Green Mountain Lookout has been (mostly) on the summit of Green Mountain since 1933. The structure that stands there today is 75 percent original material -- fir that has seen more than eighty seasons of snow and fire, rain and shine.

But for years, hikers who have trekked to the top of Green Mountain have been unable to peek inside the building, and few know the history of it. That curiosity can be satisfied this summer, thanks to a pilot program made possible through a partnership between Washington Trails Association and the Darrington Ranger District. 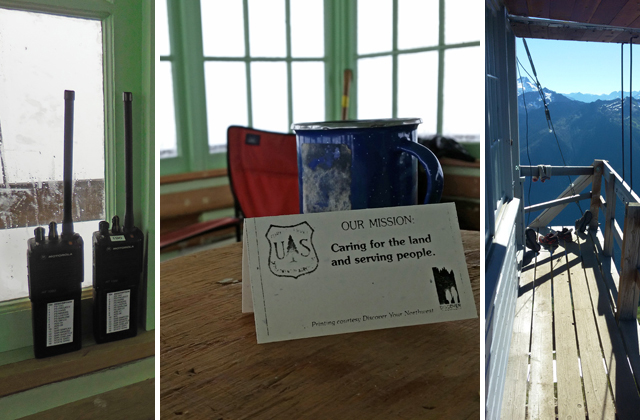 Spending the weekend talking to hikers and helping arrange the lookout for the 2016 season was a fun and rewarding way to volunteer. Photos by Loren Drummond and Anna Roth.

Volunteer stewards will be stationed in the lookout periodically throughout the 2016 hiking season in order to offer hikers an open lookout and education about the stunning surroundings and the history of the structure.

My fellow volunteer, Cory, and I were the very first of that group to staff the lookout.

On Friday evening, after sweeping out the ladybugs and settling in, we looked through the lookout to see what was up there. Along with some cleaning supplies and an extra radio, Cory found an old lookout log from Doug Newman, who spent at least one summer up there in the sixties. The log offered us a glimpse into the past, when the structure functioned as a fire watch tower, and paid lookouts stayed in the 100 square-foot building for a full season.

Newman logged the few visitors he saw during his summer (137 between July and early September) and how fast he got at retrieving water from the lakes below (his best time lake-to-lookout was 30 minutes). He also recorded 'Lookout Hour' conversations, a time each evening when all lookouts stationed in the district chatted with each other over the radio about their days -- who they'd seen, what they'd done, and what they were planning for their days off.

Cory and I turned in after we finished reading this account, getting ready for our important (though admittedly different from Doug's) assignment to begin the next day. While Newman had looked out for fires, we were there to talk with, and listen to, hikers. To learn where they had traveled from, and how their experience had been. 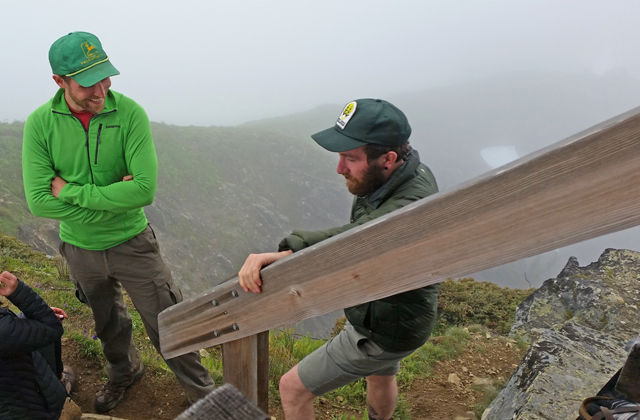 Educating hikers about Green Mountain Lookout was a nice way to spend a weekend. Photo by Loren Drummond.

Saturday morning we rose to more clouds. We'd heard they were expected to burn off by afternoon, and apparently that's what 112 other hikers (and five dogs) were hoping for as well.

Our first group arrived at 9:00 a.m., and people just kept coming, hoping for a view. A church group from Arlington, a MeetUp group based out of Bellevue, and even a few friends I was expecting all trekked to the top on Saturday. 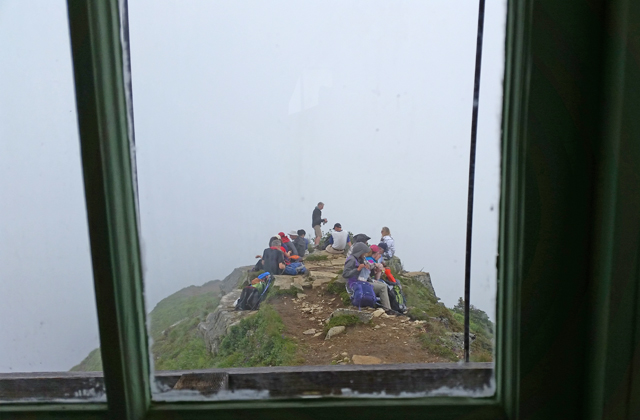 Lots of hikers visiting on Saturday hoping for a view. Photo by Anna Roth.

Unfortunately, the views never materialized, but almost everyone was pleased and surprised the lookout was open.

Some hopeful hikers asked, "You're the ranger, when's the weather going to clear?"

But mostly, visitors were happy they could come in and look around. Some asked about the history of the lookout, others just wanted to know what it took to stay up there. (If you're one of the latter, look for the application period next spring, which will be publicized by WTA.) 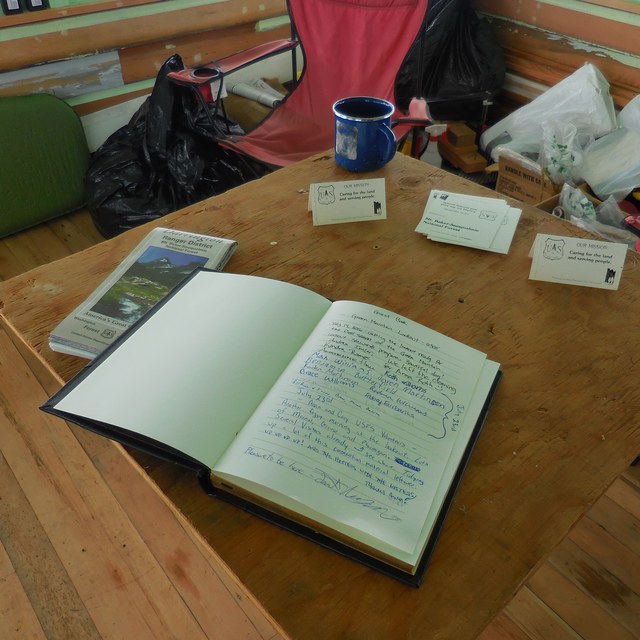 Visitors last weekend were the first in many years to sign a guestbook in the lookout. Photo by Anna Roth.

As the day wore on, one group after another left the summit. By 5:00 p.m., we realized we hadn't seen anyone in an hour. By 6:30 p.m., it was very quiet -- our only company was the local marmot who lives under the lookout, and the occasional squeak from a pika in the valley below.

Then we noticed something we hadn't seen all day -- a ridgeline to the west. The clouds were lifting slightly, and the setting sun lit up the mist and rocks with a rosy glow. Snowfields we hadn't realized were below us emerged, and we went to sleep hopeful for a clear day. 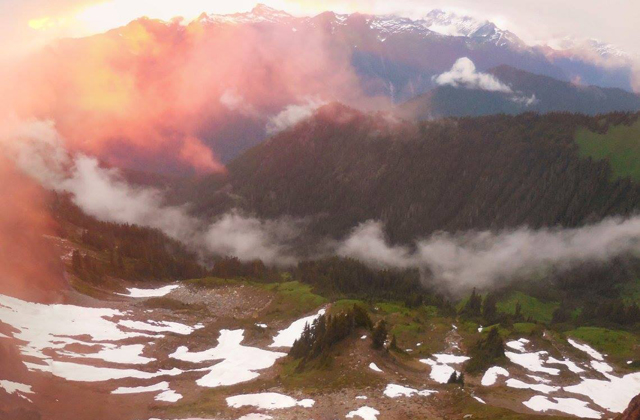 Living in the alpenglow at Green Mountain Lookout. Photo by Anna Roth.

At 2:00 a.m., Cory woke me up and we stepped onto the catwalk with a thick sea of clouds below us, and mountain tops peeking out, like dark islands in the sky. The moon was just past full, and it lit up the snow on the peaks. We could see Glacier Peak to the south, and Baker and Shuksan faintly.

Even the stars were bright, though they competed with the moonlight, and we thought we saw a couple of planets hovering close to the horizon. After about 15 minutes of gazing (and one happy-dance by me), we went back to sleep, excited for the morning. 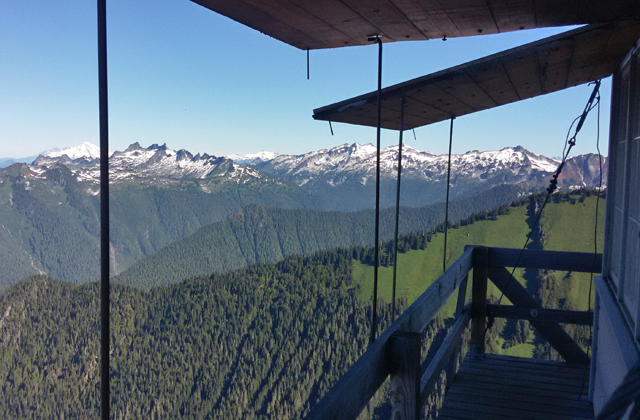 The view from the catwalk looking northeast from Green Mountain Lookout. Photo by Anna Roth.

The morning was clear, and we enjoyed the silence and the expansive vista before our Sunday visitors arrived.

Sunday was far quieter than Saturday, with only about seven hikers before 11:00 a.m. More visitors came after noon, and Cory and I talked with the new crop of hikers, including a painter, an aspiring architect, two WTA trip reporters, and the Wilderness and Trails Program Coordinator for the Darrington Ranger District. We even saw one couple who had been up the day before. They were happy they finally got the views they were hoping for. 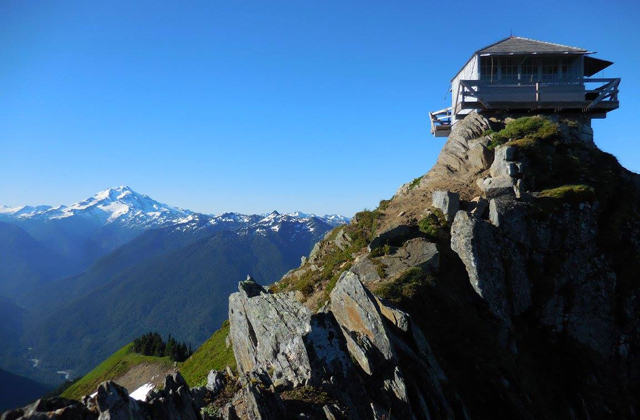 As we hiked down, one quote from Doug's lookout log echoed in my head.

"In a life now being auto-mated beyond belief -- the Lookout Experience is Unique + one of the few opportunities left for a look back towards days gone by."

It was true in 1969. It's true now. And I feel lucky to have experienced it for even one weekend.

I signed up for it but did not get picked. Hopefully in the future I will get a chance. Nice write up and pictures.

Great write up, interesting to note the increased volume of visitors compared to the 1960's. I'd volunteer for this in a heartbeat-

Nice write-up and photos. Thanks for sharing. Wow, how visitation numbers have increased. Back on October 11, 2005, my friend Marin and I did this as a day hike. We saw one other hiker all day. The lookout was absent then. The day was mostly sunny, but with frequent clouds blowing past, offering us occasional views of our shadows adorned with spectral halos reflected in the mist below.

During Doug's tour, the forest was closed due to extreme hazard conditions; that would account for his low number count.

Also of note is that is the summer of the big Sasquatch sighting at Cub Lake. Newmann writes about the numbers of media and others driving up the Suiattle Road to get a piece of the news.

Those who were at the Suiattle River Road re-opening party in 2012 may recall a slideshow by the Darrington Historical Society, which featured Doug's log. It is a gem, and worth checking out if you are lucky to visit GMLO when volunteers are there.

There was a fire on Green Mountain that summer; the lower portion of the trail is in that burned area. Note the dark forest, little or no undergrowth. It started near the Suiattle Road. Also that summer was the Evergreen Mountain Fire. That burned forest is evident on the Meadow Creek trail out of Skykomish.

JoannaC on Head in the Clouds: A Weekend Volunteering at Green Mountain Lookout

Thanks Anna and Cory for staffing the lookout that weekend! My husband and I chatted with you there on Sat. afternoonand had lunch under the lookout deck like you recommended. Though we complained about the clouds the whole time, in retrospect when I looked at the pictures I'd taken I realized how gorgeous the mountain was covered in dew and mist. Mist-ical landscape. And SO GREEN.

Really enjoyed your story and experience up on the lookout. Thanks for sharing.

I hope to see more Pilot Programs like this one

Anna, thank you for sharing your experience. I also volunteered but wasn't picked. I have hiked to several lookouts so far this year, including Winchester Mountain, Alpine, High Rock, Tolmie Peak and Heybrook. I was sickened by the vandalism at High Rock. The recent blog "Then and Now: Kloshe Nanitch Lookout" is a sad reality of the world we live in.

I believe Pilot Programs like this one, along with amazing volunteers, are a good way to take care of and preserve these historical treasures. Hopefully, more of the lookouts will be added to this program in the future. I would also like to see more of them opened up for overnight stays. Either first come first serve or rented through county, state or federal agencies.