Plenty of parks and greenspaces are interspersed in and around cities in Washington, but few hit the combination of variety and accessibility found at Mount Vernon’s Little Mountain Park. Here, in this 500-acre greenspace, you can enjoy a day outside entirely on foot or on bike, since the park is just five minutes from downtown Mount Vernon. 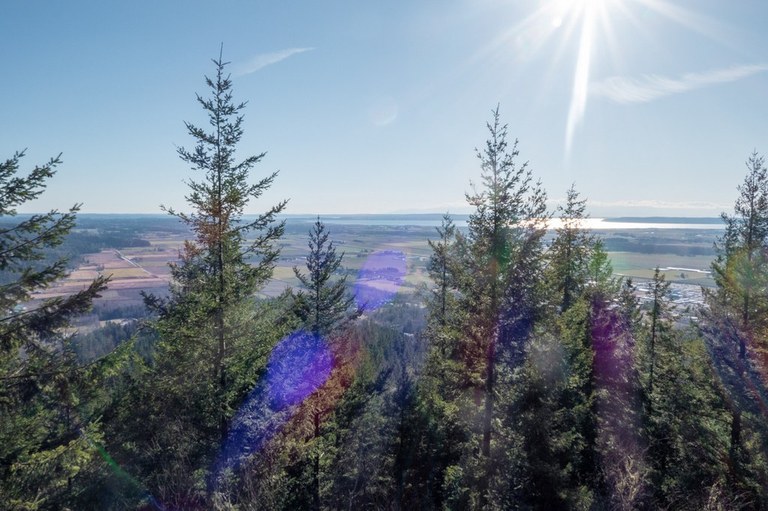 It’s one of the easiest-to-access trail systems in Washington, with options for hikers and bikers, whether they want a steep calf-burner, or a longer, gentler route to the top. And that’s thanks to work done by WTA staff and volunteers in partnership with Skagit Land Trust and Mount Vernon Parks and Recreation.

For two years, WTA has been improving the Darvill Trail, built by Fred Darvill, a local who purchased a parcel of land adjacent to Little Mountain Park to keep it from being developed. As a climber, Fred wanted to be able to walk from his house to the nearby mountain to get some training in, so he built the Darvill trail in order to access Little Mountain Park.

Now owned by his widow Ginny Darvill, the property is in trust with Skagit Land Trust, and the city of Mount Vernon has an easement on the property, which allows them (or any partner they contract with) to maintain the trail.

Enter WTA. Two years ago, the city of Mount Vernon contracted us to help improve the Darvill Trail. The water table had risen since Fred built it, and sections of the route were practically under water during the wet season. 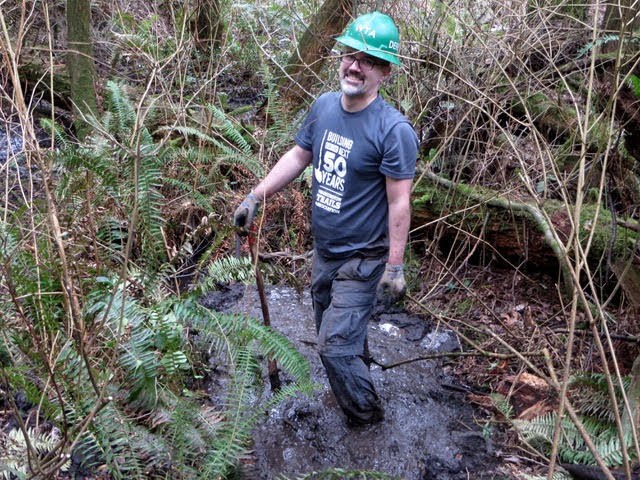 Muddy sections of the Darvill Trail required some serious attention from WTA to make them hikeable. Photo by Barbara Budd

“We were up to mid-calf in mud,” recalls Barbara Budd, who was the crew leader on those work parties. “It was so wet there that our usual solutions wouldn’t work. We wound up build a new sort of structure for me — a prefab puncheon.”

That meant using synthetic materials (WTA usually uses natural materials like wood or rock) and a different foundation for the structure. The crew had to sink gravel and cement blocks into the muck in order to have a foundation on which to build.

Barbara, who worked for the Forest Service before she joined WTA, had never made prefab puncheon before and was thrilled for the opportunity to learn on trail.

“It was a new experience for me, so it was fun to learn something new in the field.” 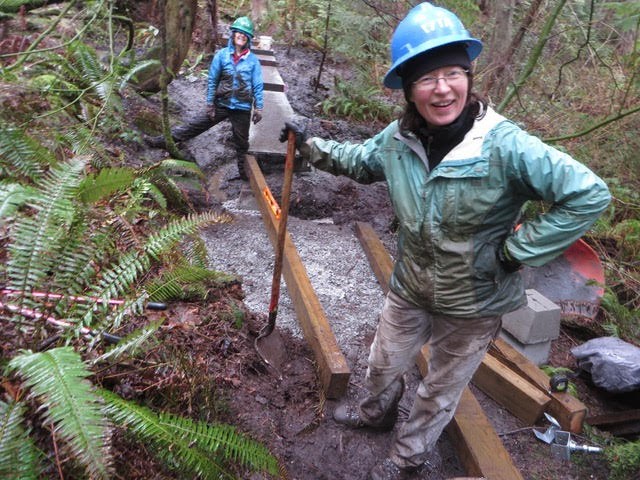 Working on the muddy section of the Darvill Trail. Photo courtesy Barbara Budd

Once the city saw the quality of the work WTA had done on the Darvill Trail, they asked us to help out on  other projects. Fred had also built a trail he dubbed Up Quick, which does just that; gets hikers up to the top…quick.

Barbara explained, “Fred built it as a training trail, but it was starting to see a wider variety of users. More people were slipping and falling because of the steepness and there were erosion concerns.”

So she and northwest regional manager Arlen Bogaards scouted a new, more sustainable route for Up Quick. This meant changing it from a fall line trail (meaning one going straight up the hill) to a longer one with more switchbacks. 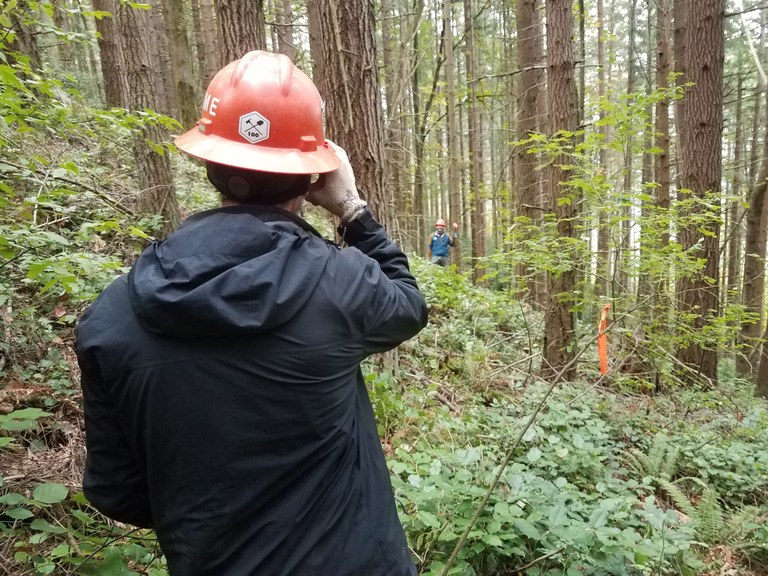 They put in a rough line and James and Sean, our contacts at the City of Mount Vernon came in to approve it. Then, Arlen and Barbara saw the new route as an opportunity to host a Trail Layout and Design class for WTA assistant crew leaders. This class flagged the route, so that future crews could come in and begin building it.

It’s still a good trainer and the route is more sustainable than one heading straight uphill would be. 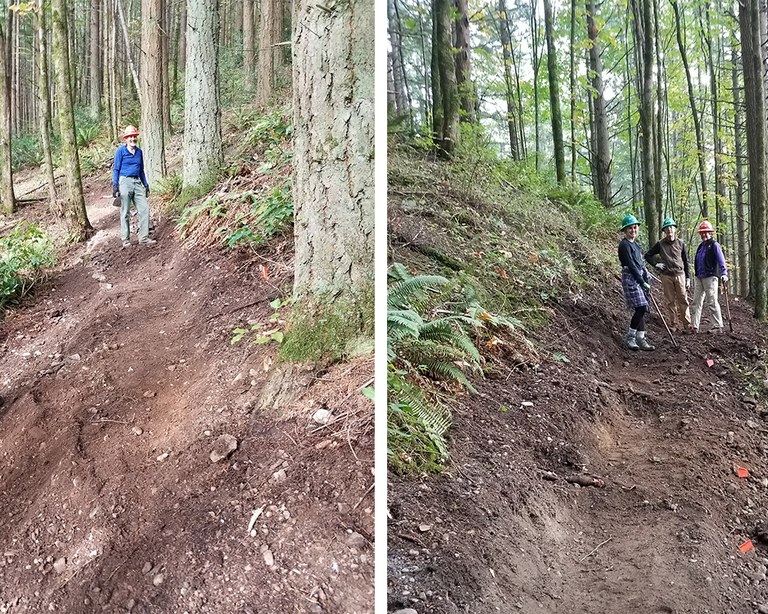 Crews rough in the trail scouted and laid out by Barbara and Arlen. Photos courtesy Arlen Bogaards.

Mentorship and growth on trail

Little Mountain Park was also the site of several of WTA’s first all-women day work parties. Crews got the opportunity to try very technical skills, since the project on the Darvill Trail involved building puncheon and stairs, and the work on Up Quick required lots of rock work and tread work. Providing opportunities for women to work together and learn from each other has been positively received. 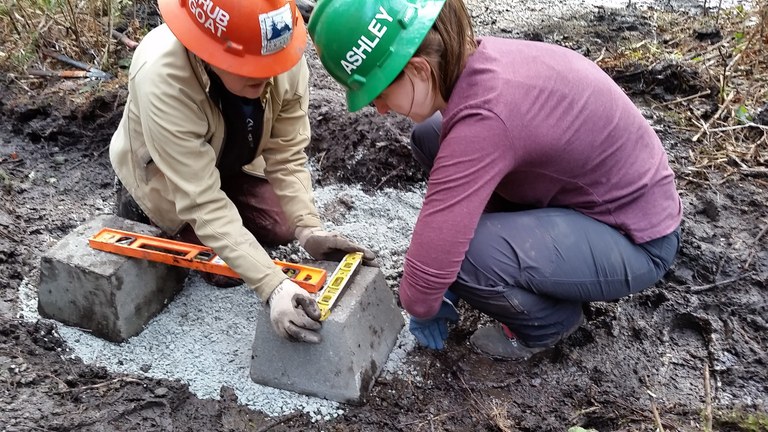 Learning how to level foundation blocks for the boardwalk. Photo by Barbara Budd.

"These all-women parties were the first times I was able to teach people new skills and it felt really good. It helped build my confidence, and gave me a purpose for wanting to become an ACL. I really wanted to keep empowering people, especially women, and give them the sense of fulfillment that I got when I work on trails." 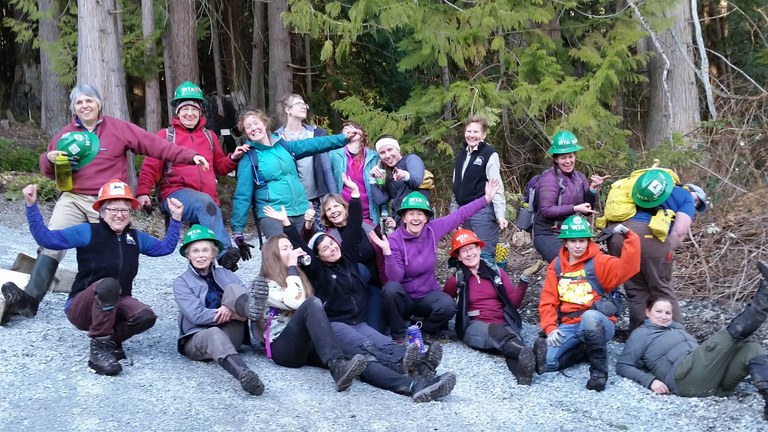 Letting loose after the end of a successful day of work on the Darvill Trail. Photo courtesy Barbara Budd.

Other volunteers have appreciated the investment in identity-specific work parties and the atmosphere they have. One said, "[I] appreciated the positive environment that was created by our crew leaders; love there there are women-only groups!"

And Barbara loves leading these work parties. "I have a passion for encouraging women to spend their time outdoors doing things that society tells us we can’t."

Volunteers have revisited the work they completed on these work parties, and documented it in their trip reports. Passing hikers, seeing the work being done, have been inspired to join future work parties. And Ginny Darvill herself has even helped out on several of them!

“Ginny is a delight and a half," says Barbara. "She joins our work parties fairly regularly and is out there digging in the dirt with the rest of us. She loves it. She makes us homemade cookies for every work party she comes to, and let us sit in her garage during lunch to avoid the rain when we were working there during the winter.” 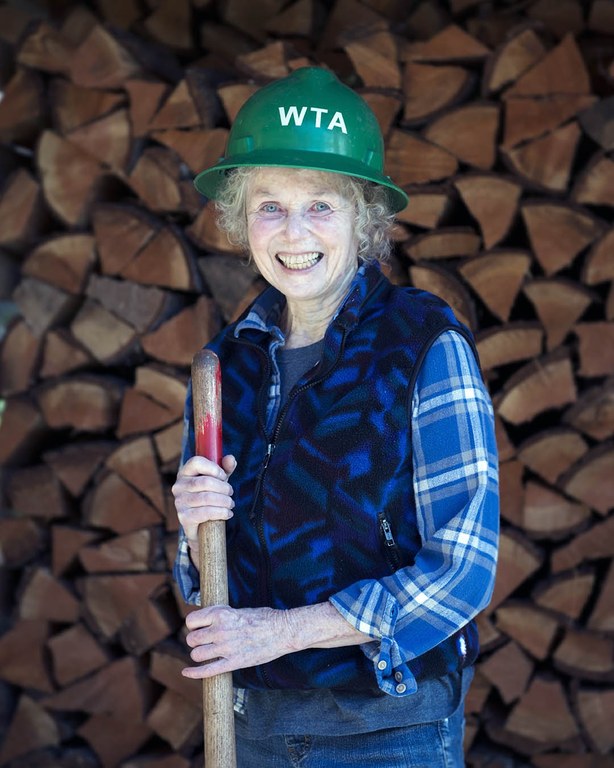 Ginny Darvill, who owns the property the Darvill Trail is built on, has joined WTA for several of the work parties we've done in this park. Photo from WTA archives.

Building for the Future

Little Mountain Park is already a local haven for people to connect with the outdoors. One of WTA's youth ambassadors took a class of 4th and 5th graders here to spend some time outside and wrote a trip report about the experience. 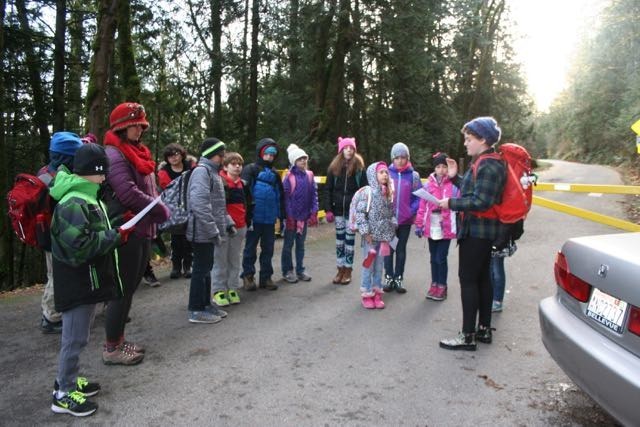 An expectations-setting meeting with the 4th and 5th graders before heading off up Little Mountain Park. Photo by Cheryl Anderton.

Kids from the 5th grade of the Mount Vernon Elementary School also use the trails on Little Mountain Park to connect with nature in their backyard. There's even a Mount Vernon local who's exploring these trails one at a time with his toddler.

Trails serve communities best when they stand the test of time. And it takes a lot of work and investment from a lot of quarters to make sure they're sustainable. One volunteer summed up just how much work it can take to create a long-lasting trail:

"It was a day of learning that we needed to square everything and level it out within an ant's eyelash or the whole project goes sideways at the end. We hauled gravel, shoveled muck, sawed, drilled and pounded and as it was time to go, we were screwing the last screws in on our bridging material. When this trail is finished, it will make an excellent addition to the trails in this nice little park. We hikers owe a debt of gratitude to the family who deeded this property to prevent it from becoming suburban sprawl instead of a nice little winter hiking spot."

We're lucky that Ginny Darvill had the foresight to preserve this area, and that WTA can rely on our land manager partners and volunteers. Together, we'll continue to create trails that stand the test of time for years to come.

Want to join us? We've got plenty of volunteer opportunities near you. Check out our calendar, find one near you, and we'll see you out there.