Skip to content
Passion Projects Bring WTA Volunteers Back to Favorite Trails Our volunteers often find themselves replacing worn-out structures, rebuilding tread or even rerouting trails built by WTA crews who came before them. We’re grateful for the volunteers who were part of those original crews and continue to go back, over and over again, to maintain the projects they started. https://www.wta.org/news/signpost/passion-projects-bring-wta-volunteers-back-to-favorite-trails https://www.wta.org/news/signpost/passion-projects-bring-wta-volunteers-back-to-favorite-trails/@@download/image/Pete Dewell - Asahel Curtis. Photo by Rachel Wendling.jpeg

Our volunteers often find themselves replacing worn-out structures, rebuilding tread or even rerouting trails built by WTA crews who came before them. We’re grateful for the volunteers who were part of those original crews and continue to go back, over and over again, to maintain the projects they started.

It’s a bit of an understatement, but WTA has worked on a lot of trails, and we’ve been at it for 28 years. Our volunteers often find themselves replacing worn-out structures, rebuilding tread or even rerouting trails built by WTA crews who came before them. We’re grateful for the volunteers who were part of those original crews and continue to go back, over and over again, to maintain the projects they started. As an organization, we’re proud of this legacy and the miles of trails and memories you, our members and supporters, have made possible. This special connection to trails and places runs deep — and sometimes spans decades. 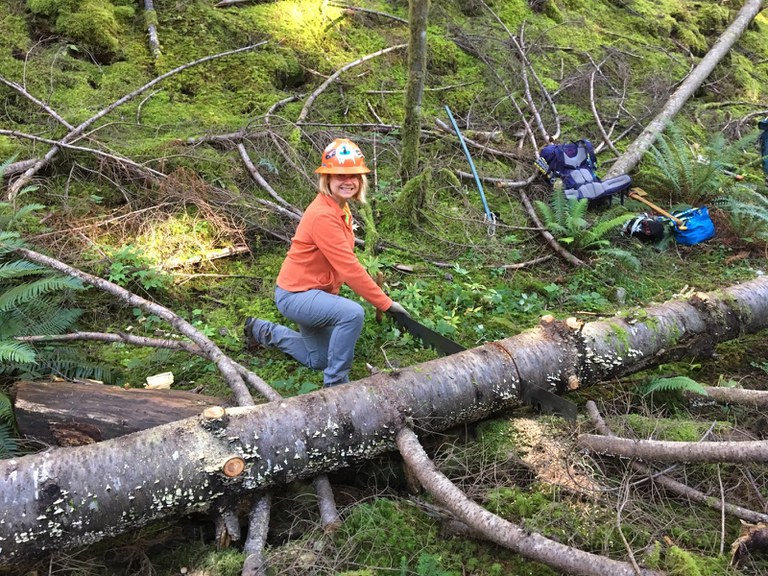 Liz sawing through a fallen tree along the Pratt River Trail. Photo by Karen Bean.

It’s sometimes hard to find an outdoor refuge near town, but Liz Ulloa found hers along the Pratt River. And she is helping WTA achieve our long-term goal of creating a remote backpacking option that is still close to home (or within easy reach for many).

“I love that this trail feels remote and yet is not terribly far from North Bend,” Liz said. “My cell phone still doesn’t work there, and having a place that’s relatively close but off the grid is a nice respite in today's busy world.”

Liz started working on the Pratt Connector Trail in 2010 and has returned to work on it pretty much every year WTA has hosted a work party there. Overall, Liz has spent 28 days on the Pratt, and will be leading a backcountry response team there this summer. During those work parties, a lot of progress has been made.

About 3.5 miles from the trailhead, the trail makes a big turn away from the river. For years, hikers asked “Were you able to make the turn?”

“Many years ago we couldn't ‘make the turn’ because the vegetation and downed logs were so thick. Now, we can go many more miles — all through the work of volunteers using hand tools and crosscut saws,” Liz said.

Liz became a volunteer chief crew leader last year and has big dreams for the Pratt.

“I’m hopeful this trail will be fully open within the next 5 years so it can be hiked as a thru-hike. I've only been about 8.5 miles in from the Middle Fork side, and I’ve been to Pratt Lake on the other end,” she said. “Seeing the completed trail would be amazing. The whole valley is such a beautiful place, with its feeling of remoteness and wildness. I want to share it with others.”

“I haven't been backpacking or hiking, other than backcountry response teams, volunteer vacations or scouting trips for work parties, in I don't know how many years,” he said.

“Work parties allow me to get out there,” Ken said. “I thoroughly enjoy working for WTA. It’s one of the things that gets me out of the house.”

Considering he has been part of more than 600 work parties since he started volunteering in 1998, it’s a good thing he likes them. Twenty-three of those days on trail have been spent on Angry Mountain. 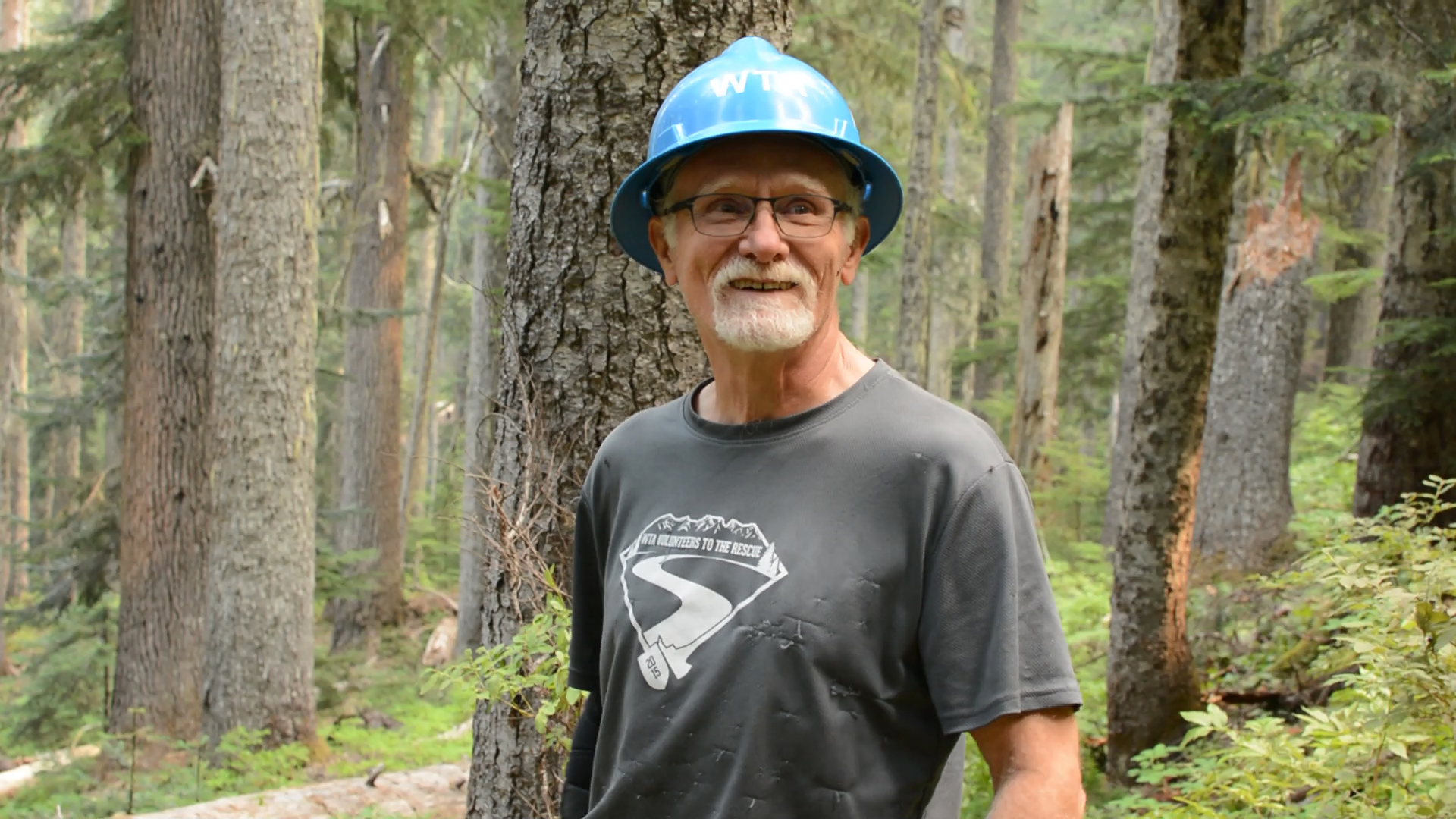 Ken has been a volunteer Crew Leader for much of our trail work on Angry Mountain. Photo by Erika Haugen-Goodman.

Before Ken and his fellow volunteers started working their magic on it, Angry Mountain was a lost trail with nearly a decade’s worth of backlogged maintenance. WTA began working to make the trail hikable again as part of our Lost Trails Found campaign in 2015. Ken was part of that first backcountry response team (BCRT). He was asked to start leading crews there the following year and didn’t stop.

“After you start working on a trail a few times, you get attached to it,” he said.

Ken’s desire to recover a lost trail, and see the project through to the end, kept him coming back again and again. In 2019, he was able to see all of his work pay off. After the final log was cut and the last BCRT ended, most of the crew met up to celebrate. During the celebration, Ken sent a text to Ryan Ojerio, WTA’s Southwest regional manager: "Angry Mountain has been found.”

Now that the trail has been restored, Ken is excited and hopeful for the future. He hopes to see new volunteers continue to come work on the area, ensuring it’s there for hikers to continue to enjoy for years to come.

Janice O’Connor has fallen in love with the Duckabush River Trail, but her favorite connection is to her crew members.

“One of my first WTA volunteer experiences was on the Duckabush,” Janice said. “Learning how to manipulate drainage with perfectly constructed dips and swales was the goal for the day. What I mostly learned that day was that folks with varied backgrounds like the banker, the engineer and the nurse could figure out together how to make this work. Solving problems together that are very different from everyday challenges — creates connections and friendships that remain, and the Duckabush maintenance demands remain significant.”

Janice has spent 665 days building trails and memories with WTA since 2002 and has been working on the Duckabush since 2004.

The Duckabush has a reputation within the trail maintenance community for type 2 fun (challenging in the moment but fun in retrospect) that builds strong bonds within crews. It rains there — a lot. Some especially heavy rains have trapped crew members in their tents for days at a time. That, coupled with the trail traveling through a burn area, means that crews never seem to run out of downed logs to cut or drainage to manage. “The Duck” is one of WTA’s most frequently visited trails for work parties because of its consistent maintenance needs. It’s good that the trail gets so much attention, because it is an important corridor on the Olympic Peninsula, and that’s part of the reason Janice likes it so much.

Despite the challenging work and potential for deluges, volunteers go back year after year. And after they finally take a break from work parties there, veteran volunteers like Janice enjoy hearing about adventures (and misadventures) from the Duck. 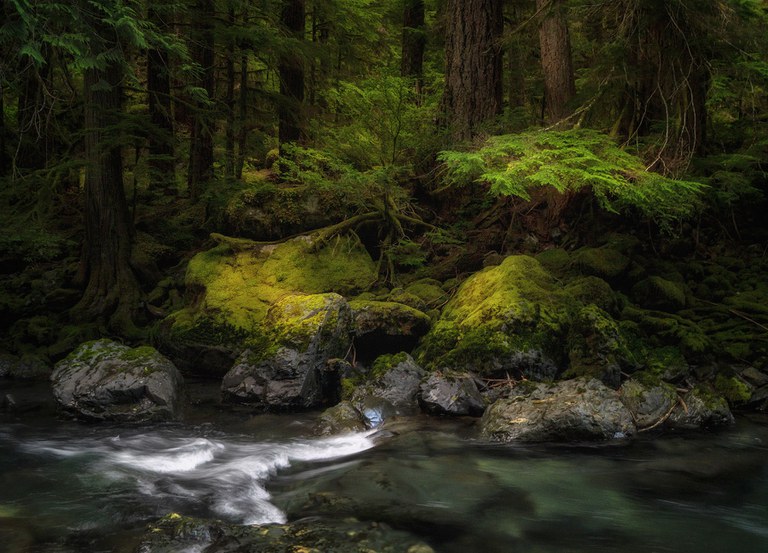 It's no wonder volunteers love the Duck! Photo by Heidi Walker.

“I’m doing shorter hikes these days, but delight in the opportunity to hear the backcountry response team tales of the Duckabush from all the crew leaders who travel there now,” Janice said.

Some of WTA’s volunteers are such regulars on work parties that they’ve formed connections to countless trails. Pete Dewell is one of those volunteers. Pete is WTA’s most seasoned trail maintenance volunteer, with 2,148 days on trail since he started volunteering in 1998.

One of those trails is the Asahel Curtis Nature Trail in the Snoqualmie Pass area. Pete has worked on the trail many times, going back as far as the early 2000s. It’s even where Pete and many WTA staff and volunteers celebrated the massive milestone of his 2,000th work party in 2019. 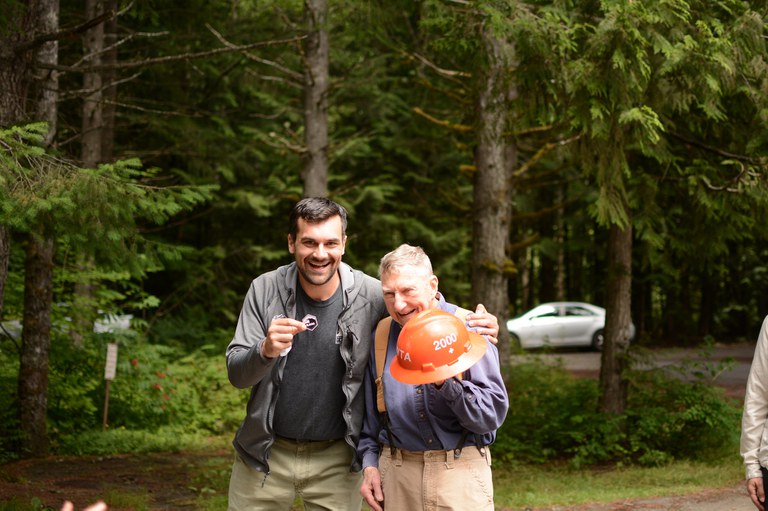 Pete's accomplishments called for a custom 2000 sticker to add to his new hard hat. Photo by Rachel Wendling.

He completed plenty of projects over the years, including the massive rock wall at the beginning of the trail. He’s also worked on puncheon bridges, crib steps, culverts, drainage and so much more. For an experienced volunteer, the variety of projects offered here kept the work constantly interesting.

There are also some more personal memories here, from when Pete has volunteered with family. He remembers two of his granddaughters spending a day pulling out spikes from the old decking of a puncheon bridge, and then hauling the decking back to the trailhead.

Pete appreciates that the trail is an interpretive trail, and that it’s welcoming to young children, parents, middle-aged and older folks alike. Pete appreciates being able to work on a trail that allows people to find their own connection to nature.

“Since it is an interpretative trail for families and schoolchildren, I hope that it can be kept in good shape for them,” he said. 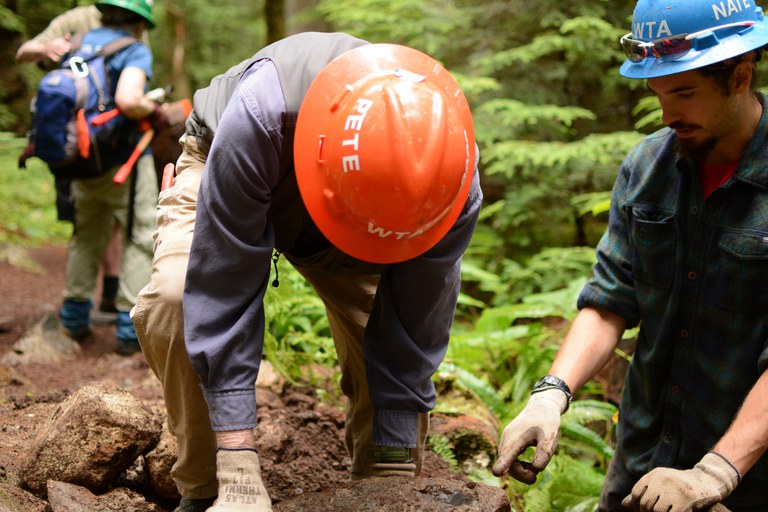 Pete has an incredible eye for building rock walls. Photo by Rachel Wendling.

The work and passion of each crew — and individual volunteer — leaves a mark on every trail we touch. If you listen closely while walking on a boardwalk, you may be able to hear the laughter of the crew that spent 4 months rebuilding it. You can see echoes of the teamwork that was required to move rocks into place for the wall holding up the trail. For many of us, trails hold personal, more intimate memories — the first place we used a crosscut, the trail where we met our future spouse or the mountain we visit on a work party every rainy spring. And like these volunteers, we may find that we just can’t help but go back — over and over and over again.

This article originally appeared in the Summer 2021 issue of Washington Trails Magazine. Support trails as a member of WTA to get your one-year subscription to the magazine.